An octopus squeezing through a small space.

A squishy ball which deforms when it is squeezed.

These are the inspiration for a new form of nano drug delivery being developed by chemists at the University of Otago, that could help treat skin conditions such as strawberry birthmarks. 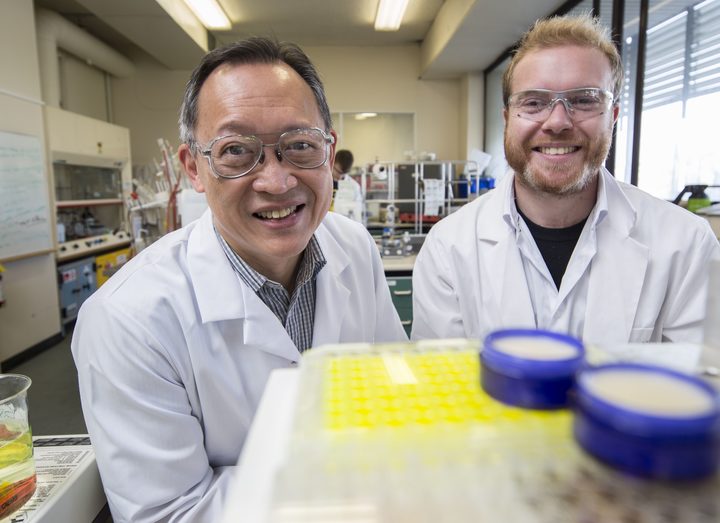 Human skin is an amazing organ. It’s strong, watertight and protective. But the very features that make it good at its job, also make it a drug delivery challenge.

“The main problem with skin,” says postdoctoral researcher Dr Sean Mackay, “is that it keeps everything out. … the top layer is very tightly bound together, and it’s very difficult to get anything through.”

He says small molecule drugs such as nicotine can diffuse through gaps in the skin – which is why nicotine patches are effective – but many drugs are made from larger molecules that just won’t fit through.

However, Sean and collaborator Dr Eng Tan, who are both in the Department of Chemistry at the University of Otago, think they have found a solution.

“We’re developing new technology that will enable us to deliver drugs to places that are difficult to access,” says Eng.

What Eng and Sean have in mind is a way of delivering drugs directly through the skin or to the brain through the blood-brain barrier.

Eng explains that most of the drugs we currently use are systemic.

“Once the drug is ingested or delivered intravenously through a syringe, it goes everywhere,” says Eng. “If you take a drug orally it gets distributed via the digestive system. If the drug is injected, it spreads through the circulatory system.”

But there are problems with this machine gun scatter approach to administering drugs.

“Usually when you take a drug you want it to go to a specific place,” says Eng. “For example, it you’ve got a headache, you don’t really need the drug to be in your foot.”

“Our way of getting around it is to basically put the drug where it’s required. So not all over the place. Which gets around the problem of side effects,” says Eng.

Sean, whose expertise is in nanotechology, says they got their first inspiration from an octopus.

“We watched an octopus squish through a little tiny hole, and figured that the skin is basically composed of cells that are stuck together with little tiny holes between them,” says Sean.

“If you could make a particle that could change its shape and squish between them, you could get more drugs through, more easily.”

The second stroke of inspiration came from a squishy ball. When a squishy ball is squeezed, its contents move from the constricted area and bulge into another part of the ball.

“The concept of it is that if we can encase the drugs within very, very small particles that have the same properties as the squeezy ball,” says Eng, “then we can squish these particles that contain the drug through the skin.”

The benefit is that the drug is delivered exactly to the place that needs it.

Eng and Sean are collaborating with the Gillies McIindoe Research Institute, which is a world leader in treating strawberry birthmarks. There is an existing drug, and Sean and Eng are hopeful that their nano drug delivery system - which they have called Squish - can be used as a cream to be applied to the birthmark, allowing the drug to be absorbed directly.

The researchers say they are looking to patent their invention, which builds on Eng’s previous research, finding better ways to allow drugs to reach the brain. And they say that the technology could also be used to treat serious scars and be used in cosmetics.

To hear more about this research, check out the full podcast.