A rare native bird of prey, the New Zealand falcon, is thriving in one of the country’s most modified landscapes – the ubiquitous pine plantation. 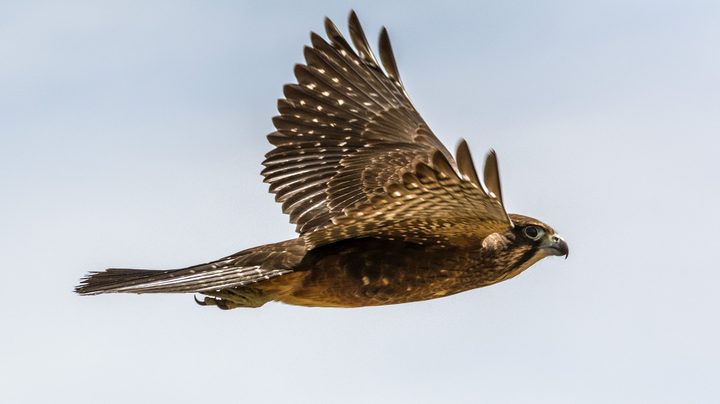 A male New Zealand falcon perches in the top of a pine tree, one of just a few left standing on a windy ridge. 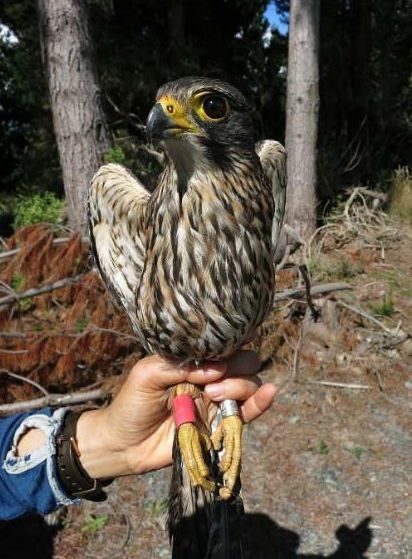 A young falcon that has been banded just before it leaves the nest. Photo: Parker Conservation

From this vantage point, his keen eyes can make out his mate on the ground below, incubating three eggs in a rough nest of sticks. She is well sheltered in a pile of logging debris; trunks and branches, left behind after the forest was logged two years earlier.

The male kārearea scans the wide valley. It is a rough mess of tall weeds, piles of debris, or ‘slash’ as it is known in the forestry trade, and an evenly spaced scattering of small dark pine seedlings.

In the distance, a small figure comes into view, making his way up a rough dirt track. The falcon watches intently as the man gets closer.

About three hundred metres from the pines the man stops and lifts his binoculars to scan the ridge.

The falcon lets out a series of harsh barks, warning the intruder that he has been seen.

Then, with another series of loud of kek-kek-keks the bird takes off. Wings arched, and legs and sharp talons extended, he stoops towards the intruder.

The attack is fast and low. He speeds past less than a metre above the man’s head, then climbs away, back towards his lookout tree.

The man smiles, settles his hat firmly on his head, and turns to walk away. 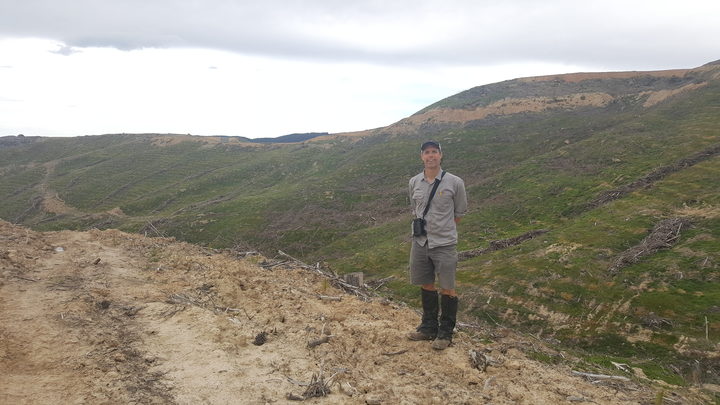 Graham Parker stands in a pine plantation that was harvested two years ago, and is a 'perfect' nesting and hunting territory for NZ falcons. Photo: RNZ / Alison Ballance

The man is ornithologist Graham Parker, from Parker Conservation, and he will be repeatedly dive bombed as he checks in on the dozen falcon nests that he has already discovered this summer.

When it comes to studying New Zealand falcons, Graham says that the most important piece of field equipment is a hat. The hat is a way of protecting both yourself and the falcon, should it manage to make contact with your head.

The bird’s fiercely protective behaviour tells Graham everything he needs to know – that this falcon pair are still successfully nesting.  Graham’s team will return later in the season to band the chicks, but he leaves the pair alone for now. 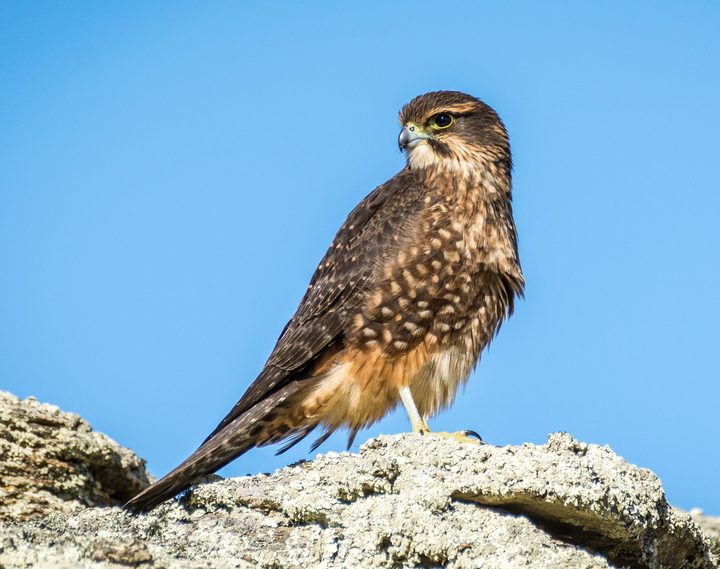 This is the third summer that Graham has been studying falcons in pine forests on the coastal hills between Dunedin airport and the Taieri coast. These Otago forests are managed by City Forests and Wenita Forest Products, which are funding Graham and falcon expert Chifuyu Horikoshi to find out more about falcons in the recently logged areas. Birds NZ and the local councils have also helped with funding for the project.

Graham is finding out how many pairs of falcons are nesting in the forests, and says that he found over 20 last summer. He is also banding young birds, to find out where they move to when they leave their parents’ territory.

NZ falcons nest on the ground, often tucked under a pile of 'slash' or logging debris. Photo: RNZ / Alison Ballance

Good management of nesting falcons is an important part of the forestry companies’ Forestry Stewardship Council (FSC) Certification. At the moment, if a falcon nest is found, all activity is stopped within 200 metres of the nest until the chicks have successfully fledged. Graham says he is working with the forestry companies to ensure that their protocols around falcon nests are effective in protecting both workers and birds.

He is heartened by the support he has had from the companies, and the enthusiasm of their staff for the falcons, saying that he has had carloads of people turn out early in the morning for the chance to join in when Graham and his team are banding young birds. 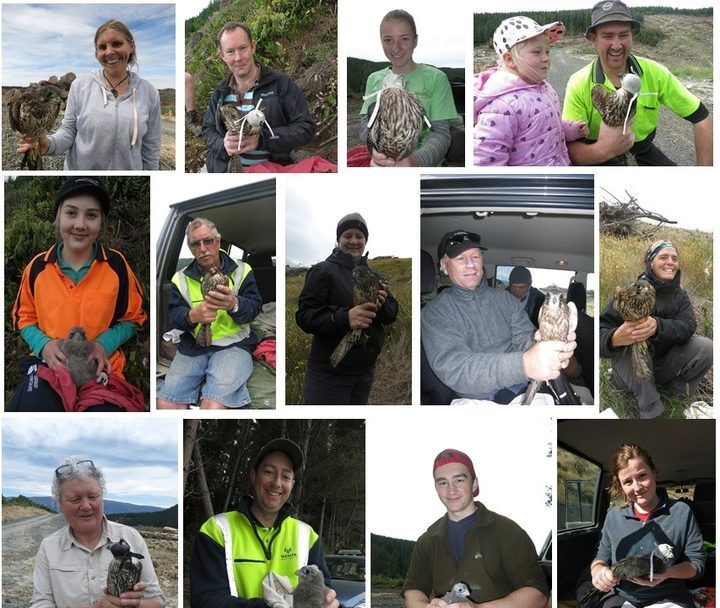 There are plenty of volunteers from Dunedin and the local forestry companies who are keen to help band young falcons. Photo: Parker Conservation 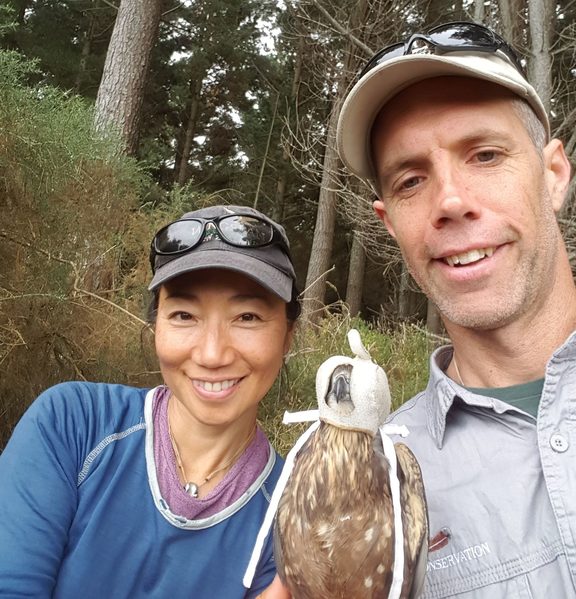 Falcon researchers Chifuyu Horikoshi and Graham Parker. The falcon's head is covered in a helmet to keep it calm while it is being handled. Photo: Parker Conservation

Pine plantations remain excellent habitat for falcons for about four years after logging. The open areas are home to good numbers of small birds, which are the falcon’s main prey, and the piles of slash are good nesting sites. But as scrub regenerates and newly planted pine seedlings begin to grow, the areas become unsuitable.

Graham says that falcons have been studied in large pine plantations in the Kaingaroa area of the central North Island. Logging here happens successively across the landscape, meaning there is a patchwork of different aged forestry blocks and an ongoing supply of suitable nesting habitat for falcons.

In Otago, there is less of a mosaic of different aged forest, and Graham is curious to find out where the falcons that are currently nesting will move to breed in future.

To find out more about the New Zealand falcon - which features on the New Zealand twenty dollar bill - listen to the full podcast with Graham, which also features a few loud, territorial kārearea. 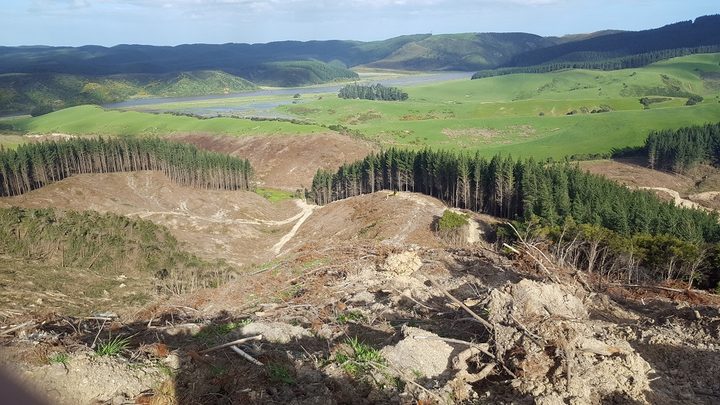