The giant willow aphid has only been in New Zealand for five years, but it has quickly become a widespread sticky nuisance for farmers and orchardists.

“There are a multitude of problems,” says Scion entomologist Stephanie Sopow, “and we find it everywhere in New Zealand.”

Luckily, Stephanie is getting close to confirming that a small parasitic wasp called Pauesia might be a suitable candidate as a biocontrol agent. 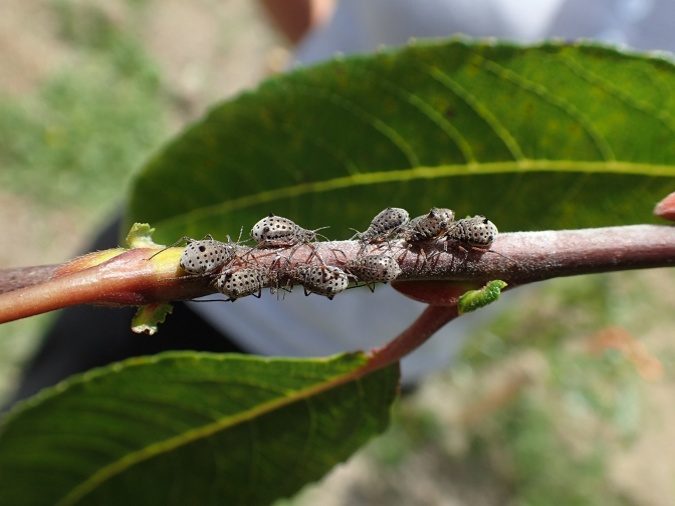 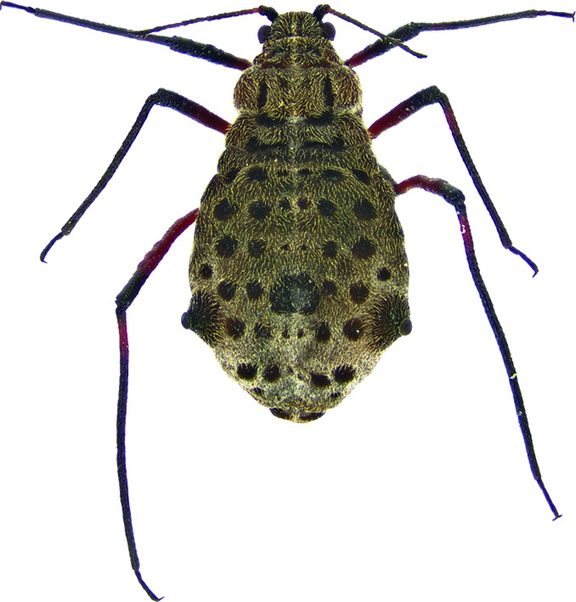 The giant willow aphid lives up to its name – at five to six millimetres long it is much larger than most other aphids. It has a distinctive brown shark fin-shaped ‘thorn’ on its back, and lives in large colonies clustered along stems and branches.

Giant willow aphids (Tuberolachnus salignus) were first discovered in New Zealand at the end of 2013, and within a few months they were found on willows and poplars throughout New Zealand.

Stephanie says giant willow aphids have also been found in orchards on apple and pear trees, and on a few native plants, including Coprosma and Pittosporum species.

The giant willow aphid probably originated in East Asia and is now widespread in many parts of the world, wherever there are willows. It was found in Australia shortly after it was detected here, and Stephanie says we do not know how it got here. 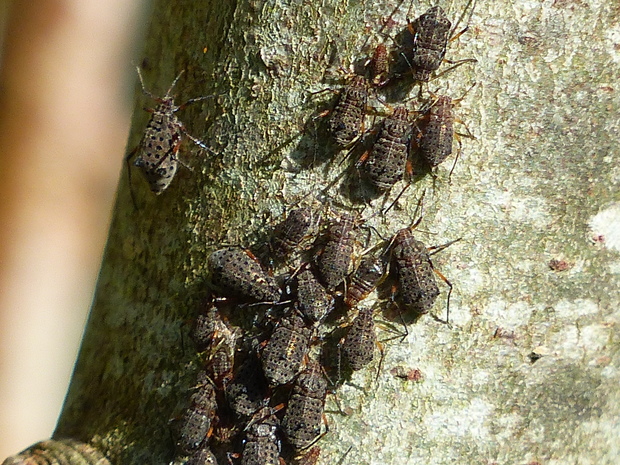 The aphids cause many problems. They feed by sucking sugar-rich tree sap, and in large numbers they can stress their host tree by depleting its nutrients and water. Stephanie says this causes willow branches and even young trees to die. This is a problem as willows are widely planted as shelterbelts, for erosion and flood control, and in some cases as sources of pollen and nectar for bees in early spring, when few other flowers are available.

The aphids continuously excrete honeydew as they feed which coats the tree, the ground and anything below - including sheep taking shelter and shade.

Sooty mould grows on the honeydew, and Stephanie says that as a result “it makes things sticky - and it also makes things black.”

She says that sooty mould covering leaves makes it difficult for plants to photosynthesise. It is a particular problem for kiwifruit growers as it marks fruit and lowers their value.

The honeydew is also bad news for bees and beekeepers. It attracts large numbers of wasps, which rob honey from hives and kill bees. Bees also feed on the honeydew, but unfortunately it produces crystalline honey that hardens in the comb and can’t be extracted. 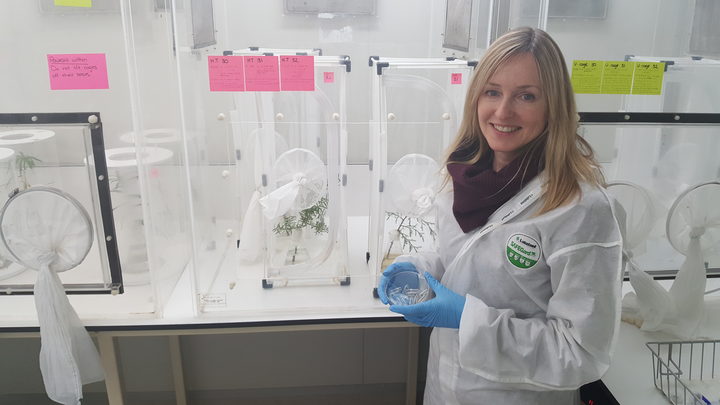 Stephanie Sopow in the secure containment lab at Scion, where she is testing how effective a parasitic wasp might be at controlling giant willow aphid. Photo: RNZ / Alison Ballance

The hunt for a biocontrol agent

Stephanie has been looking for ways to control giant willow aphids. Insecticides were considered but would pose a risk to bees.

Ladybirds are known to eat giant willow aphids, but the most effective one, the harlequin ladybird, is an invasive pest in its own right.

There is a pathogenic fungus that can infect and kill the aphids in autumn, when conditions are moist, but it is not specific to giant willow aphid which meant it would be a risk to native aphid species.

This left Stephanie with one option – a parasitoid wasp species called Pauesia salignae.

“Parasitioids are always more specific [to a species] than predators, and this one, we think, is only found on giant willow aphid.”

Stephanie’s hunt for Pauesia took her to California three times, where she was eventually successful in collecting aphids that were infected with parasitioids. Fortunately she was able to enlist the help of a local citizen scientist who knew good sites to collect aphids from in Oakland.

What she was looking for were aphid mummies. 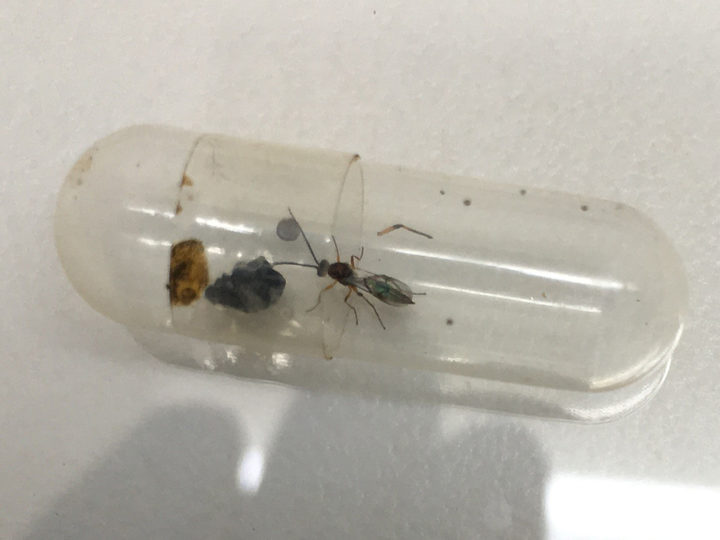 A parasitic Pauesia wasp emerging from a giant willow aphid mummy in the lab. Photo: Scion

”When an aphid becomes parasitised, at first you don’t see anything,” says Stephanie. “The aphid is walking around, looking like a normal aphid, but it has got a developing larva inside it.”

“Eventually, that larva gets so big it takes over the body of the aphid. The aphid becomes very distorted, it becomes very fat and round, and at that point it is called an ‘aphid mummy’.”

Stephanie says at this stage the infected aphid stops moving and glues itself to the host plant.

The aphid mummies were brought back to New Zealand inside a chilly bin, and taken directly to a secure containment facility on Scion’s Rotorua campus for rearing.

Stephanie says that in the lab a single female wasp can lay between 20-60 eggs.

Since December 2017, from an original 10 Pauesia females she has reared seven generations of wasps, adding up to more than 1900 individuals.

As well as testing how good the parasitoids are at infecting and killing giant willow aphids, Stephanie is also testing to make sure the wasp won’t parasitise other aphid species, especially some native aphids from an ancient lineage that she describes as the “tuatara of the aphid world.”

Once she is certain that Pauesia is effective for giant willow aphids and won’t be an issue for any other species, Scion will put forward a proposal to the Environmental Protection Authority (EPA) to consider releasing the wasp as a biocontrol measure. 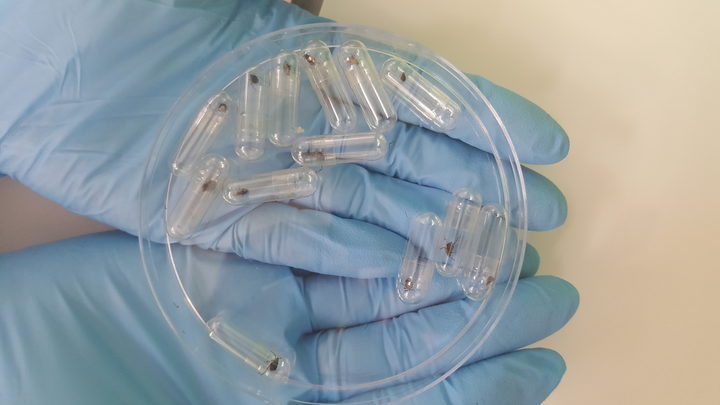 The buddleia leaf weevil is proving to be very effective at controlling the invasive butterfly bush.