University of Otago science communication student Joel Zwartz is fascinated with how birds, such as Woof Woof the tui, talk. 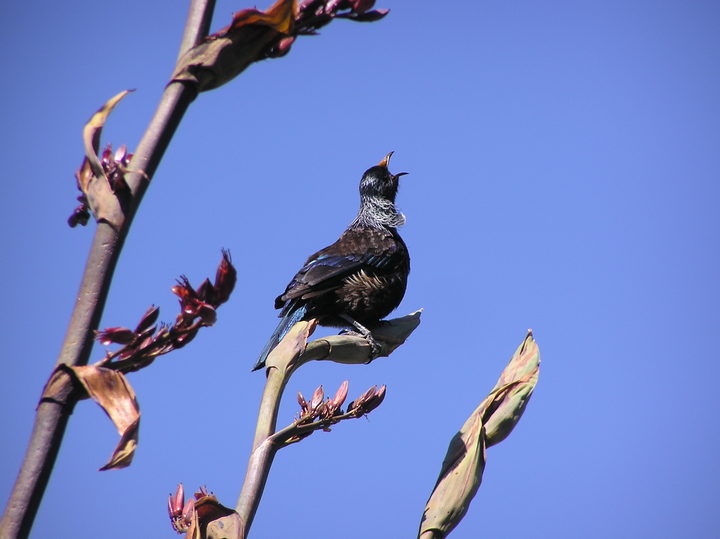 Tui have a repertoire of beautiful songs and are excellent mimics. Photo: Tony Wills

When I first heard Woof Woof talking in a Youtube video, I was struck by the fact that he clearly had a broad Kiwi accent.

Unsurprising, you might say, as he obviously learned to speak by listening to someone who also had a Kiwi accent.

But having done a linguistics degree many years ago, I knew we use the position of our jaw and tongue to produce the two frequencies that make each vowel sound distinct. In fact, linguists describe vowel sounds in terms of these two dimensions of height and frontness.

This tui did not have the same dimensions to play within his vocal apparatus, and yet his vowels were spot on.

I wanted to know how Woof Woof made his vowel sounds with his different vocal apparatus, and in doing so, hopefully encourage listeners to think about how we make vowel sounds.

I interviewed Robert Webb, who rescued Woof Woof when he was a chick with a broken wing and continued to look after him at the Whangarei Native Bird Recovery Centre. He's a lovely guy and as expected, his accent matches Woof Woof's, in fact uncannily so.

Then, to learn more about the vocal apparatus of birds, I interviewed Massey University's Dr Sam Hill, who has done a PhD on the complexity and variation of songbirds' songs.

Finally, armed with a spectrogram of Woof Woof's speech, I spoke with Dr Hunter Hatfield, from Otago University's Linguistics Department.

He describes the human vocal apparatus, how we produce vowel sounds, and compares that with how we think Woof Woof does it.

As well as being an interesting phenomenon in its own right, a talking tui is a ‘hook’ to draw listeners into a discussion about human vowel sounds, and how we distinguish distinct vowel sounds despite different pitches and different accents, by mapping each vowel sound onto that two-dimensional vowel space. It's a piece of science that over the years I have enjoyed trying to impart over the campfire.

We’re used to viewing dazzling nature documentaries that blow us away with the perfect adaptation of particular species to a particular role. In the same vein, but closer to home, this podcast tries to shed some light on an amazing adaptation of the human brain and vocal apparatus, one that has been crucial to the formation of language, and therefore culture and civilization.