From poo to plastic

Scientists at Scion are developing a revolutionary new toilet that will not only safely treat human waste using no water and very little energy, but will also produce a useful product - bioplastic.

The World Health Organisation (WHO) reports that 2.3 billion people lack basic sanitation, and that each year there are 829,000 deaths from diarrhoea due to unsafe water, sanitation and hygiene.

To combat this, WHO released global guidelines this week to set a universal standard for sanitation by 2030, and Scion hopes its new toilet will be part of the solution. 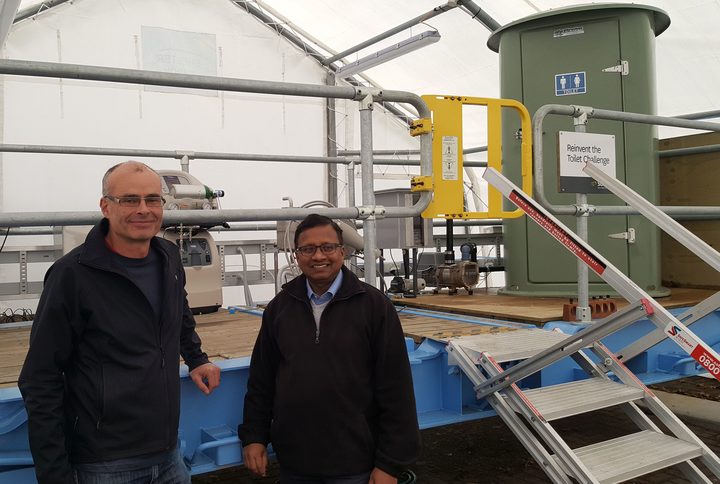 Daniel Gapes has been working on a compact, low-energy way of breaking down human waste using heat and pressure. And microbiologist Suren Wijeyekoon is using the resulting waste and microbes to make bioplastic. Photo: RNZ / Alison Ballance

Every year, on average, we each produce about 145 kilograms of faeces and many hundreds of litres of urine. That’s a mountain of poo and wee that poses a major health hazard unless it is safely treated and disposed of.

But where most of us just see offensive waste, Scion scientists see an opportunity to go from poo to plastic.

Daniel Gapes says that “we are basically taking the poo that comes out of a toilet and want to process it through a technology which is called wet oxidation.”

“That’s essentially a pressure cooker system where you put the ([faeces and urine] in and if you add enough heat and enough oxygen you can actually burn the material that’s in there in the water.”

“It’s like lighting a fire,” he adds, “but in the water phase, rather than having to wait for everything to dry out.”

Daniel says that wet oxidation is a hydrothermal treatment process that uses oxygen, temperatures of about 200°C and pressure to breakdown materials. It takes 10-20 minutes and kills any pathogens in the waste.

It does not require any additional water, and is energy efficient.

During the treatment nitrogen is converted to ammonia, and some of the organic material is converted to acetic acid, “which is essentially vinegar.” Most of the phosphorous from the raw material becomes an ash which can be separated from the fluid and safely disposed of.

“The interesting thing is that the acetic acid or vinegar can be readily eaten by bacteria,” says Daniel. “And the ultimate aim is to get highly purified water.” 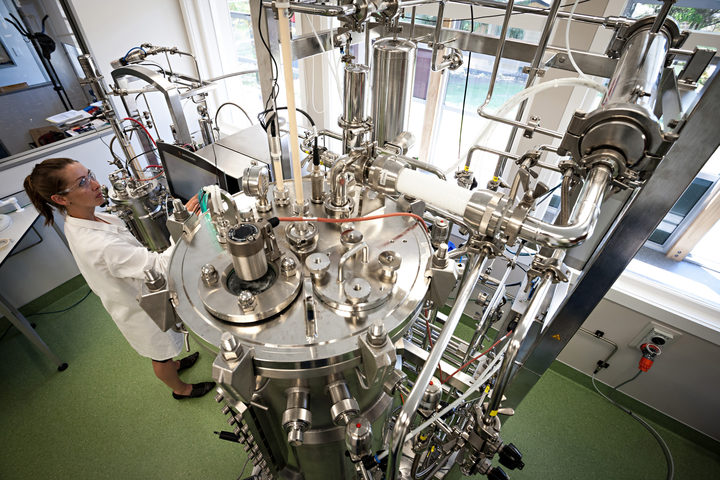 A biofermentation system housing bacteria that can take human waste treated by wet oxidation and convert it into bioplastic. Photo: Scion

Microbiologist Suren Wijeyekoon has been experimenting with different kinds of naturally occurring bacteria that produce a ‘bacterial body fat’ that can be used to make bioplastic.

These bacteria are fed the acetic and propionic liquor that is produced by the wet oxidation to produce PHA, or polyhydroxyalkanoate.

PHA bioplastic has similar properties to widely used fossil oil-based plastics such as polypropylene and polyethylene, but Suren says that “it has the additional properties of degrading in the environment.”

“We were able to get the microorganisms to accumulate plastic up to about 40 percent of their body weight.”

Suren says that carbon is the most important ingredient, and one of their challenges has been to find microbes that can deal with the high levels of nitrogen that present in the feedstock.

Scion has scaled its equipment to work as a safe sewage-disposal system for a single household. But Suren and Daniel say that the same process could be scaled up for entire apartment blocks or even small towns, and is at this larger scale that the production of bioplastic would become possible.

From poo to plastic - waste from the toilet is passed along to a pressure vessel, heated and then fed to plastic-producing microbes. Photo: RNZ / Alison Ballance

Scion’s ‘wet oxidation’ toilet research is funded by the Reinvent the Toilet Challenge, which is a Bill and Melinda Gates Foundation project.

Our Changing World has reported previously on a Waste to Gold project that Scion worked on in collaboration with the Rotorua District Council to find innovative ways of treating municipal sewage and creating useful by-products.