3D printing - the future is 4D

Imagine you are a swimmer who uses a prosthetic limb. How about a prosthetic foot that is stiff when you walk on it, but when you get in the swimming pool it softens up and becomes a flexible flipper?

That is the kind of product that researchers in the Science for Technological Innovation National Science Challenge say will soon become possible with 4D printing using novel polymers. 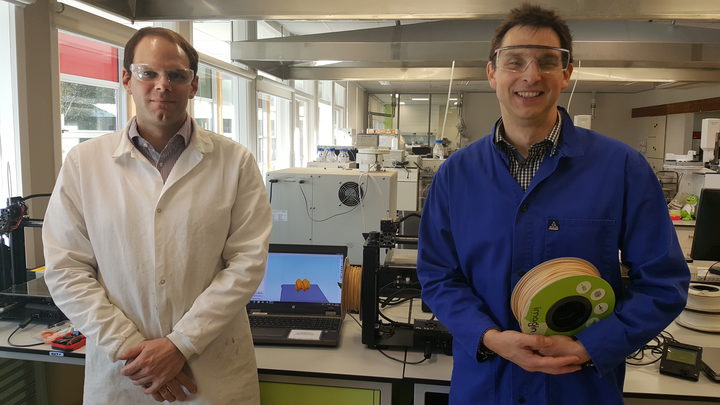 Marc Gaugler and Florian Graichen in front of 3D printing machines in the lab at Scion. Florian is holding a roll of wood-based bioplastic that can be used in the printers. Photo: RNZ / Alison Ballance

3D printing is a form of additive manufacturing, building up objects in layers. Small domestic 3D printers are now readily available – and are becoming increasingly important in manufacturing.

Scion scientist Florian Graichen says that 3D printing is an advantage for a small country such as New Zealand because small runs of product can be produced onsite in the regions, and one-off prototypes can easily be made.

Most of the raw material currently used in 3D printers is plastic sourced from overseas, but Scion has already worked with a local company to produce a bio-based and compostable feedstock that contains 10 percent wood. “It’s a nice, first example,” says Florian.

He says there is “great potential to use natural polymers, and material that is grown in New Zealand … coming from a tree, but not limited to a tree.”

Harakeke, or flax fibre, and paua shell are two other natural products that Scion researchers are working on.

“We break the structure of the wood down, the cellulose into sugars,” says Marc. “And there are bacteria that feed on the sugar, and just like humans store fat these bacteria store polymer.”

“We can process the polymer from inside the bacteria and make 3D printing filament out of them, for example.”

Florian says their research on new forms of biopolymers that could be used in 3D printers is focused on “performance and things that a conventional polymer can’t offer.”

The ultimate plan is for Scion to develop bio-based materials for 4D printing.

Florian says that 4D printing involves using “material that respond to pressure, light, any type of external stimuli so you’re not set into just one shape or one form. That’s what 4D printing is – printing with responsive material.”

Marc and Florian say there are a number of challenges they are thinking about, such as how to print different kinds of material, and how to speed up what is currently a slow process.

Most existing 3D printers are small, and Florian says another challenge is to start printing at much larger scales. This could be parts for a building, for example.

At the other end of the scale, molecular-scale printing also presents new opportunities.