Dozens of people stand in a clearing near the edge of the Waikato River in Hamilton. They are all holding strange devices which blare out static at full volume. Everyone is staring at the sky.

Suddenly there’s a blast of noise from the devices. It sounds a bit like dripping water mixed with a sharp clicking. A small fluttering speck appears silhouetted against the sky.

That speck is one of New Zealand’s only native mammals, the New Zealand long-tailed bat. 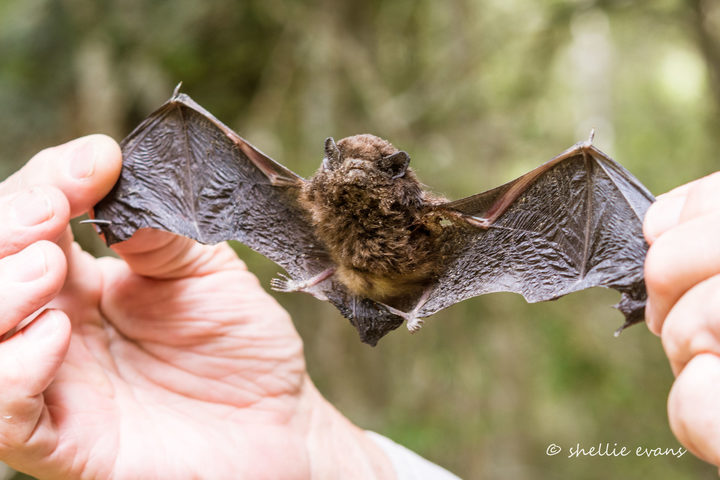 Until quite recently it was assumed long-tailed bats preferred to live in forests well away from the noise and light of cities. It wasn’t until the late 2000s that Auckland University student Andrea Dekrout confirmed bats were living in and around Hamilton.

In the years since, they have also been detected in Auckland and research is currently underway to look for them in Tauranga.

“We know a lot about how long-tailed bats move across forest areas like down in Fiordland, but we actually don’t know what happens to them moving across urban environments,” says Ben. “Will they move across motorways? Will they go across harbours?” 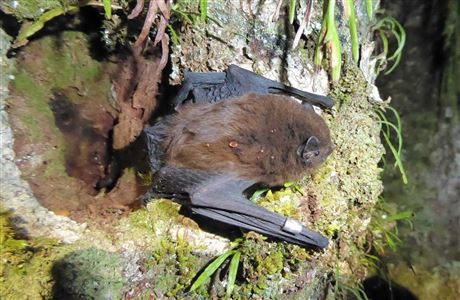 A long-tailed bat that has been marked with a small metal band. Photo: Colin O'Donnell / Department of Conservation

The reason researchers were so surprised to find bats within the urban limits is because of how they roost.

Long-tailed bats naturally live in holes in dead or dying trees. Native trees like totara, rimu and kauri typically take hundreds of years to reach that point, so it was assumed bats couldn’t survive in recently planted or regenerating bush. Their habitat was thought to be limited to remnant forest that had never been logged.

Andrew Styche, from the Department of Conservation (DOC), says those assumptions were at least partially true. He thinks bats have mostly survived in Hamilton thanks to tiny islands of remnant bush within the city limits.

“There’s not much original vegetation left around here so it is amazing they’ve survived,” Andrew says.

The long-tailed bats seem to be adapting to the urban environment. A major discovery in the last decade is that they will happily roost in exotic tree species. One of the biggest hotspots for long-tailed bats in the North Island is at the Narrows Park Christian Camp, right under the flight path for Hamilton Airport. 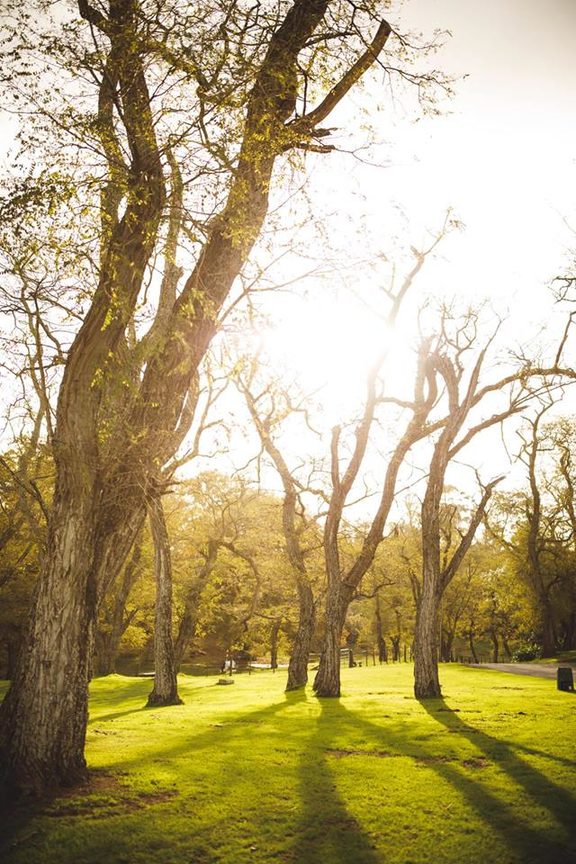 The camp’s operator, Al Belcher, says bats seem to be thrive on the property despite a complete absence of native bush.

“They’re kind of all over the park,” Al says. “They’ve found the largest number of bats roosting here that have ever been found [in the North Island]. The largest roost was 39 bats which, apparently, is a record.”

Unfortunately, the bats prefer trees which are difficult from a health and safety perspective. While Al Belcher is speaking his words are nearly drowned out by the sound of a chainsaw. One of the oak trees in the park has recently blown down and is in the process of being removed; luckily, no people or bats were hurt.

“They tend to like the dangerous trees,” Al explains, gesturing towards a stand of skeletal-looking acacias. “You can see with these acacias a lot of the branches are broken and they tend to rot from the inside out and make nice hollow cavities for [the bats] to roost in.”

Hamilton arborist Jerry Kelly says there is a balance to be struck between bats and humans.

“In Europe, if they’re dismantling trees they often leave a lot of the trunk up and cut roosts into the trunk and branches as a kind of ecological monument,” he says.

Jerry is a member of the Hamilton-based bat conservation group Project Echo, and says he’s increasingly encouraging his clients to consider bats and hole-dwelling native birds like kākā and kākāriki when they have a dead or dying tree on their property.

Salina Ghalazzy, another member of Project Echo, says another stop-gap measure for bat preservation in Hamilton is ‘bat boxes’ - artificial roosts for bats that are similar to bird houses.

“The community came together, [and] schools made some bat houses to put up,” Salina says. “I think all in all there were 19 houses put up, mainly as a tool for public awareness in the early days when bats were first found in Hamilton.”

Salina says most experts didn’t believe the bat boxes would work. But after several years the bats have recently started to move in. They’ve even been videoed in the artificial roosts.

“Eight years later it worked!” exclaims Salina. “We were flabbergasted!”

Even more encouraging is that some of the boxes placed in sunny spots seem to have become favourite maternity roosts for mothers and young. 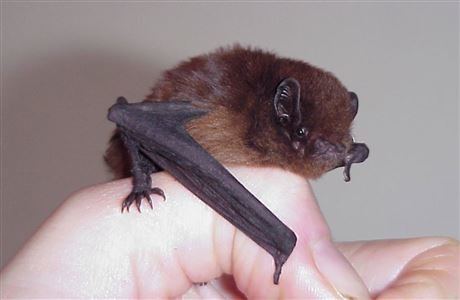 But Andrew Styche from DOC cautions that the long term survival of bats in Hamilton is far from assured. He says the two most important factors are predator control and habitat protection.

“Predator control over a really wide area … it can’t just be pest control in your backyard. It really has to be the size of thousands of hectares,” Andrew says.

“Set aside really good dark reserves, close to gullies and rivers. People want to have houses near the river and don’t want trees blocking their view, but actually that’s really important for our wildlife. It’s a big conflict.”

Andrew and the team at Project Echo are convinced that bats have the potential to be a major bio-tourism asset for Hamilton. They hold regular ‘bat fun days’ where members of the public can go out with special bat detectors in the evening hoping for glimpses of the tiny native mammals.

Until recently, long-tailed bats were divided into two subspecies - North Island and South Island long-tailed bats. A new conservation assessment in March 2018 has confirmed that there is just one species of long-tailed bat, which is classified as threatened - nationally critical.

Urban bats are also making a comeback in Auckland, and Auckland Council expert Ben Paris has been on Our Changing World talking about efforts to survey and protect them.

Our Changing World has also featured stories about short-tailed bats: Fiordland’s Eglinton Valley is a bat hot-spot, as is Pureora Forest in the central North Island.

Bats are important pollinators for native plants, including the parasite Dactylanthus.