Putting cardboard boxes to the test

The humble cardboard box is the unsung hero of the New Zealand economy. Every year, billions of dollars of exports are shipped overseas in boxes made from corrugated paper.

Many of them are carrying fruit, butter or meat that needs to be stored in cool stores for months at a time – but not all of them will make it, which is why researchers are trying to improve them so they can better withstand the rigours of chilling and shipping. 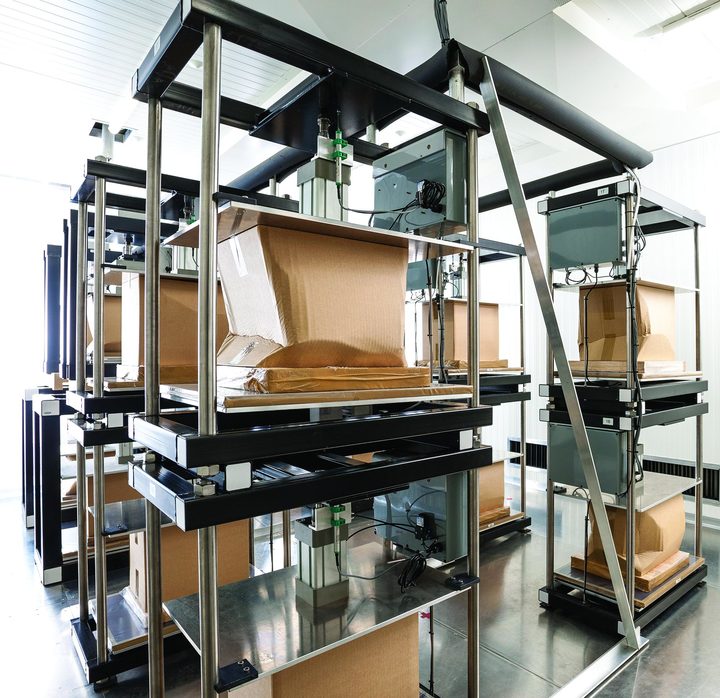 Cardboard boxes being tested in the WHITE room at Scion, which mimics conditions in a commercial cool store., Photo: Scion

Corrugated paperboard cartons are sturdy workhorses. They date back nearly 150 years, and are a very good packaging option as they are made from renewable products that can be recycled or even composted.

These days, boxes face challenging conditions, including being piled on top of one another in high stacks, and facing constant cycles of changing humidity and temperature in cool stores.

Two percent of packaging fails, a figure that Lou Sherman and the packaging team at Scion would like to improve, as part of a broader research programme that is also trying to reinvent the humble box to make it smarter.

“What we’re trying to do is optimise the performance of these cardboard boxes,” says Lou. 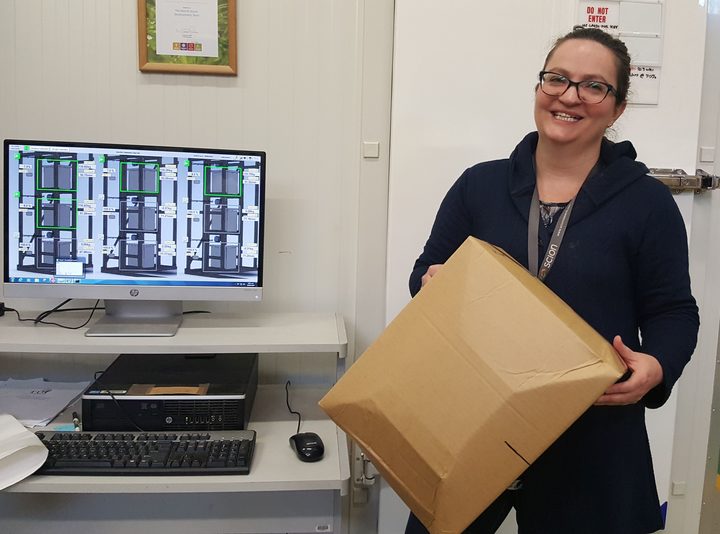 Lou Sherman in front of the WHITE room with a box that has failed during testing.Sensors inside the room show scientists what is happening as the experiment progresses. Photo: RNZ / Alison Ballance

Scion has a sophisticated facility known as the WHITE room which is designed to test boxes under realistic cool store conditions.

WHITE stands for weight, humidity intervals, temperature and experiments. It accurately cycles relative humidity between 50 percent and 90 percent while maintaining a constant temperature.

Up to 25 boxes at a time can be put in testers which apply varying amounts of pressure. Overall, says Lou, the WHITE room is designed to measure how long a box will last, at what point it will collapse and how much load it can withstand.

Lou says that they can measure how changing humidity causes a box to expand, shrink and deform over time.

She says this is a phenomenon known as ‘creep’, and it happens to anything that is under a constant load.

Lou explains that there are three well-recognised stages to creep: primary creep is a fast, reasonably large adjustment to box height when the load is first applied. Secondary creep is a slow constant change over a long period time.

“Then when it reaches a point of failure it will very quickly change in height.”

Lou says it is the rate of secondary creep that is most important, as this determines how long a box will last.

Even though the process is very realistic it is much faster than in real life, says Lou, so what is actually being measured is moisture accelerated creep.

As well as being fast, the WHITE room allows researchers to repeat tests under exactly the same conditions, so different styles of box can easily be tested under identical conditions.

Boxes that are full usually buckle and collapse outwards, and Lou says that trying to understand why the corrugated paper box fails where it does is a key part of the research.

In a previous Our Changing World story, we visited a PhD student using vibrations to test cardboard boxes.