Mussels on the move

While they are not the most glamorous species to make a new home in the predator-proof fenced sanctuary in the heart of Wellington city, staff and iwi are excited about the role the kākahi will play in cleaning up the waters of the Kaiwharawhara Stream. 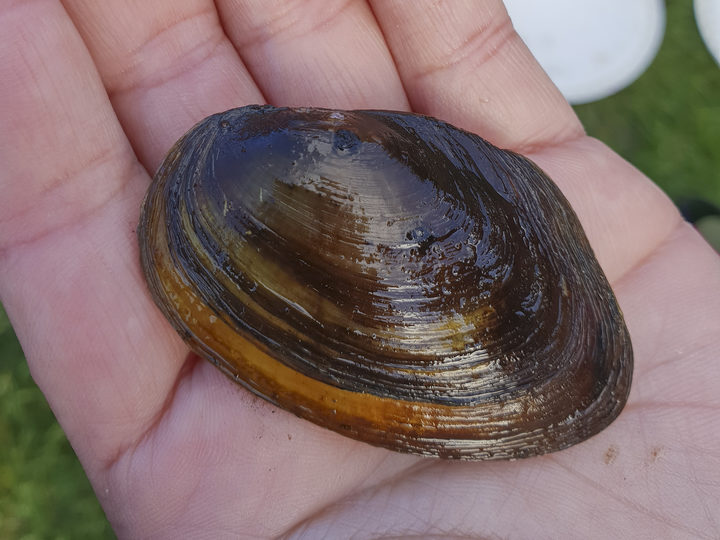 Kākahi or freshwater mussels were once a staple food for Māori, who used their shells for cutting hair or as kite rattles.

On a sunny but very windy winter’s day, I joined an enthusiastic crowd on a mission to collect 150 kākahi for a translocation to Zealandia, Te Māra a Tāne. The group included Taranaki Whānui whānau, along with Greater Wellington Regional Council and Zealandia staff.

We were at Lake Kohangapiripiri, one of the two Parangarahu lakes on the eastern side of the entrance to Wellington Harbour. They are part of the rohe of Taranaki Whānui.

The previous day, Ngāti Kahungunu had helped collect a further 50 mussels from Wairarapa Moana in their rohe. 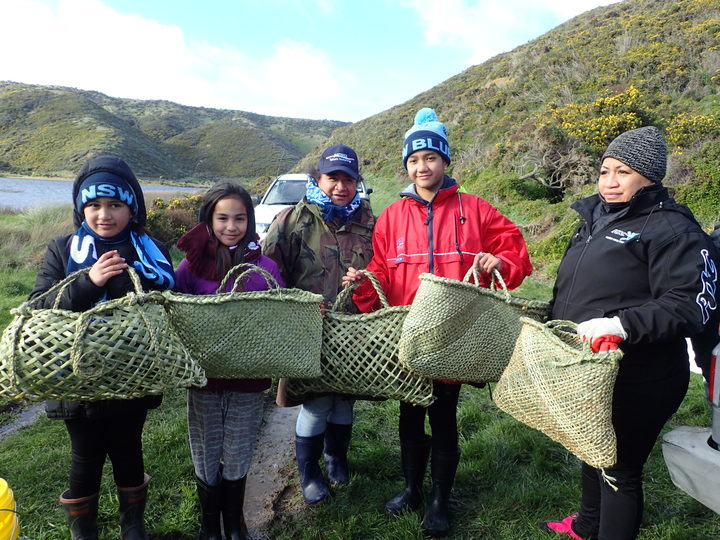 Ngahuia Wright, from Taranaki Whānui, was at the translocation with her daughter Harmony, her sister Ada and nieces Perzia-Rose and Ryah-Jane. Ngahuia says her family are descendants of Tohu Kākahi of Parihaka.

They brought with them five new flax kete, which Naghuia said had been specially woven by her mother Sharon Wright and her Roopu Raranga, or weaving group.

Ngahuia says the kete were traditionally used as food baskets, that could hold different kinds of kai, or food. She explained that the kete with large holes were designed to hold larger mussels, and allow water to freely flow in and out, while the smaller weave could hold smaller mussels. 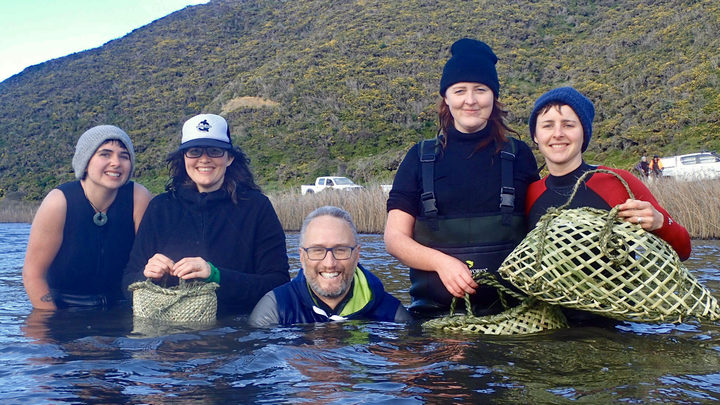 Amber McEwan (second from left) and Holden Hohaia (centre) were part of the small team that braved the wintry waters of Lake Kohangapiripiri to collect 150 kakahi. Photo: Owen Calder

Although kākahi were once an important staple food for iwi, Taranaki Whānui trustee Holden Hohaia said they had not been part of his life growing up, and he had only begun to learn about them since Zealandia had initiated the translocation.

Holden was one of half a dozen brave people who donned wetsuits and ventured into the waist-deep lake to collect the mussels.

Freshwater biologist Amber McEwan is studying kākahi and will be monitoring the success of the translocation for her PhD research at Victoria University of Wellington.

She explained that unlike marine mussels, which attach themselves to rocks, freshwater mussels live partly submerged in soft mud. She said the best way to find them was to feel for them with your foot, and then bend down to pick them up. 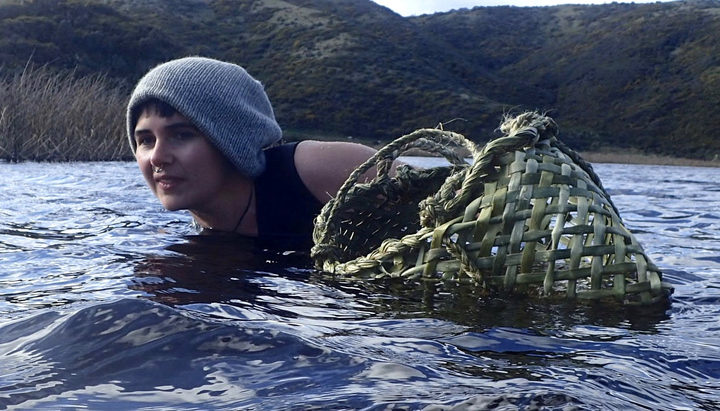 Feeling for kakahi in the mud on the lake floor. Kakahi or freshwater mussels are plentiful in Lake Kohangapiripiri which is free of pest fish. Photo: Owen Calder

Amber says there are three species of freshwater mussel in New Zealand, and the translocation involves two of these.

She says that kākahi were once widespread. “They used to be just about everywhere. You’d find huge beds in lakes and rivers.”

These days, kākahi are far less common, and although they are still reasonably widespread the concern is that many populations are comprised of old large mussels and there are no young mussels. A mussel can live up to 50 years, and their decline is due in part to degraded freshwater habitats and in part to the loss of a critical part of the mussel’s life cycle. 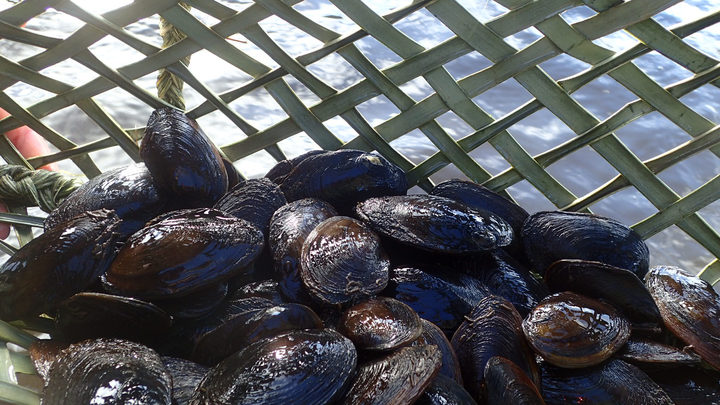 It didn't take long to collect a kete worth of kakahi for the translocation to Zealandia. Photo: Owen Calder

Amber says that all freshwater mussels “have this really amazing life cycle, where they need fish in order to complete [it].”

“So the mum kākahi will brood her babies internally, and then when she’s ready she’ll sneeze them out of shell into the water,” says Amber. “Then these little glochidia - these little animals that have grabbing hooks - they’ll grab those hooks onto a passing fish.”

The young mussels are using the fish almost as a bus, a way of getting moved to a new destination. After a couple of weeks of riding their fish ‘bus’ they transform into a miniature kākahi and drop off to settle in a new patch of mud away from their parents.

The problem for the kākahi is that major declines in native fish populations make it difficult for the glocidia to complete that vital first stage of their development.

For kākahi, says Amber, a fish “is a critical bus. If it’s not there, you die.” 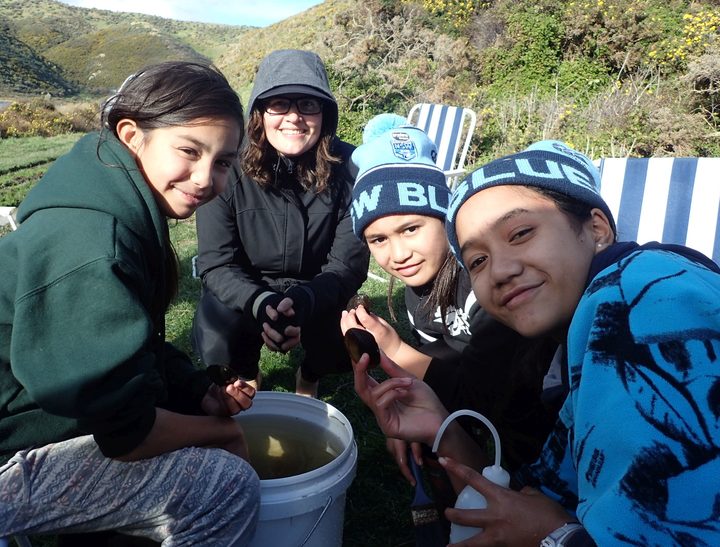 Freshwater mussels are considered to be important ecosystem engineers. Studies have shown that a single mussel can filter more than a litre of water in an hour, so a whole bed of mussels can play an important role in keeping a waterway clean.

Paul Atkins, CEO at Zealandia, says the introduction of kākahi to Zealandia’s upper dam, Roto Mahanga, which is the headwaters of the Kaiwharawhara Stream, is part of a catchment-wide ‘sanctuary to sea’ conservation project.

Amber is attaching tiny microchips to the mussels’ shells, and will be monitoring their survival and breeding success over the next few years.

Earlier this year, Our Changing World featured a story about dragonflies and damselflies living at Lake Kohangapiripiri.