The southern right whale that has been charming Wellington residents is a sign that the species is returning to old haunts around New Zealand, says whale expert Will Rayment. 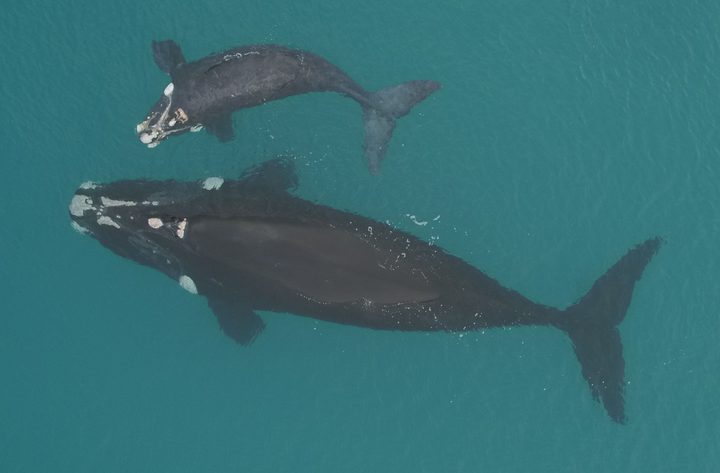 Every winter Dr Will Rayment, from the University of Otago’s Department of Marine Science, heads to the subantarctic Auckland Islands for three weeks to study southern right whales at their only known New Zealand breeding ground, more than 400 kilometres south of mainland New Zealand.

But increasingly, the whales are coming to us, returning to sheltered harbours and bays around mainland New Zealand that were once their winter strongholds.

“In winter, the southern right whales are coming inshore from their offshore feeding grounds,” says Will. “They’ve spent the summer out looking for food – which is plankton, mostly copepods – and in winter the females come inshore to have their calves and the rest of the population come inshore to basically socialise.”

Before whalers hunted the whales almost to extinction in the early 1800s, they were found all around New Zealand in large numbers, says Will.

They were so abundant that even as late as the mid-1830s the shore-based whaling station at Weller’s Rock, just inside the entrance to Otago Harbour, was killing more than a hundred whales a year.

“We reduced the New Zealand population from about 30,000 whales pre-commercial whaling, down to about 100.”

Between 1928 and 1965 there were no sightings of southern right whales around mainland New Zealand.

Only in Wellington. A Southern Right Whale having fun in our harbour, in front of the Beehive. pic.twitter.com/NoVOXVoDE2

Will says that he usually spends three weeks at the Auckland Islands each winter, and he estimates there are between 300-400 whales when he is there. He says this is only a small proportion of the total population, which is estimated to now number about 2500.

The New Zealand right whale population is growing at about 4-7 percent per year, says Will, which is a good rate of growth considering that females only produce a calf every three years.

As part of the research programme, University of Otago researchers are using drones to take photos of whales from the air. These whole animal aerial shots allow the researchers to measure each whale’s body condition, which gives an idea of how healthy they are, and whether that might change because of climate change or other impacts that humans are having on the ocean.

Finally had a chance photograph the @Wellington_NZ #whale today. I didn’t get any of those breaching shots, but it was so cool to see! #sharemewlg #nzmustdo #wellington #NewZealand pic.twitter.com/VsBiy1D2ZH

Will says that the whale in Wellington Harbour is “coming inshore to … look for other right whales.”

“It’s coming back to habitat that would have been used by its ancestors. It hasn’t got lost – it’s really checking out new areas for this expanding population.”

Will says that the whale’s breaching, tail slapping, lob tailing and waving flippers around are all a normal part of the socialising that southern right whales get up to in winter.

“We’re not exactly sure what they mean.”

Will doesn’t expect the whale to stick around in Wellington for very long.

“I imagine that if it doesn’t find any other whales, then it will move on.”

NIWA scientists have collected a tissue sample from the Wellington whale, which will tell us what sex the animal is once it has been analysed. 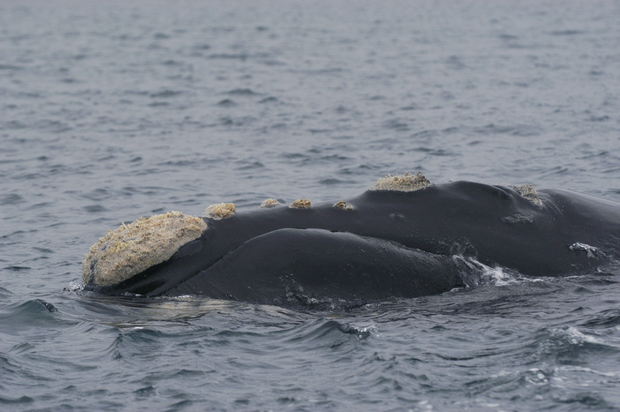 Southern right whales can be individually identified by the patterns of rough white callosities on their head. Photo: Will Rayment / University of Otago

Female southern right whales are pregnant for a year before they give birth in sheltered harbours. A female produces one calf every three years.

The only known breeding site for New Zealand’s southern right whales is Port Ross, at the northern end of the Auckland Island group, although mothers and young calves are occasionally seen around mainland New Zealand.

Scientists do not know where the whales are mating. They don’t see females at the Auckland Island breeding ground the winter before they give birth, so mating is happening somewhere else.

Campbell Island is also home to up to 300 whales each winter, but an expedition in 2014 did not see any mothers with calves, so the scientists think it is a place where whales go to socialise.

The white callosities on the head of a southern right whale have a pattern that is unique to each animal. Scientists use photos of whales to identify individuals from these patterns. The University of Otago’s whale photo library contains more than 700 individuals.

The cyamids feed on the rough skin.

While most of New Zealand’s southern right whales are found in the subantarctic, growing numbers are turning up around mainland New Zealand each winter.

During summer, southern right whales are offshore, feeding to the east and west of New Zealand. Before whaling, the Chatham Rise was a popular feeding area, but no whales are being sighted there today. The other important feeding area is south of Australia, just below the subtropical convergence, where different water masses meet, at about 45° South.

Southern right whales are baleen whales that filter plankton, especially copepods, from the water as they swim. 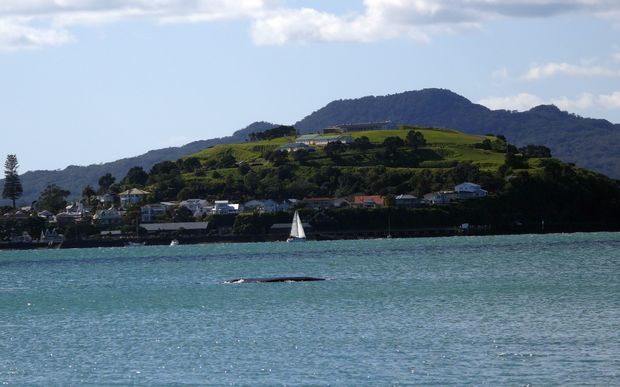 Distinct populations of southern right whales are found around the southern hemisphere, in Australia, South Africa and South America as well as New Zealand.

There are two species of northern right whales. The North Atlantic right whale population numbers fewer than 400 animals, and getting tangled in fishing gear and hit by ships are major causes of death. The North Pacific right whale is also endangered.