A floating raft of pumice up to five metres thick, that covered 400 square kilometres of ocean. Giant hunks of pumice the size of SUVs, strewn across kilometres of seafloor. A thick layer of sticky ash. Fourteen lava flows.

These are some of the clues that are helping geologists solve the mystery of the largest deep ocean volcanic eruption ever recorded.

In July 2012, the Havre seamount exploded, with a volcanic eruption that was one and a half times the size of the Mount Helens eruption in the United States.

And no one noticed a thing - until a few days later, when an airline passenger, looking out the window as she flew over the Pacific Ocean, 800 kilometres north of Auckland, spotted an enormous floating raft of pumice. She took a photo and sent it to a geologist, setting in motion an international effort to solve the mystery.

Our Changing World reported on the pumice raft later in 2012, and in October that year the NIWA research vessel Tangaroa scanned the Havre volcano with an echo-sounder and produced a map. This map was quite different to how the seamount had looked when it was discovered in 2002, and confirmed other evidence suggesting that Havre was indeed the volcano that had erupted. 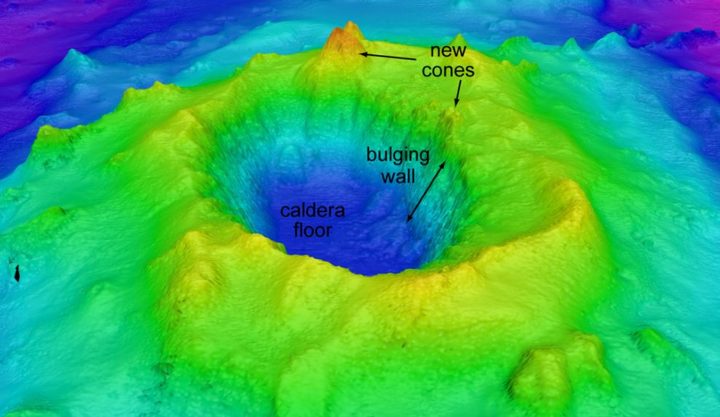 The Le Havre submarine volcano - this map was made in October 2012, a few months after the volcano erupted. Photo: NIWA

In 2015, an international expedition headed to Havre, to create a more detailed map of the volcano, take photos and collect rock samples. The team included Professor James White, from the University of Otago.

The tricky thing about submarine volcanic eruptions is that the evidence is hidden beneath hundreds of metres of seawater, making it extremely difficult to study - which is where remote operated underwater robots come into play.

The remote-operated vehicle (ROV) Jason was connected to the research ship with a fibre-optic cable so the operators could see what the ROV was looking at as they drove it around; it took photos as well as collected samples.

The automated underwater vehicle (AUV) Sentry was pre-programmed to follow a set route as it took photos and measured water chemistry.

By the end of the expedition, the team had created a much more detailed digital map of the volcano, which revealed numerous lava flows, a widespread ash layer and millions of enormous pumice blocks, up to nine metres across, scattered over the sea floor. A number of large pieces of pumice were collected. 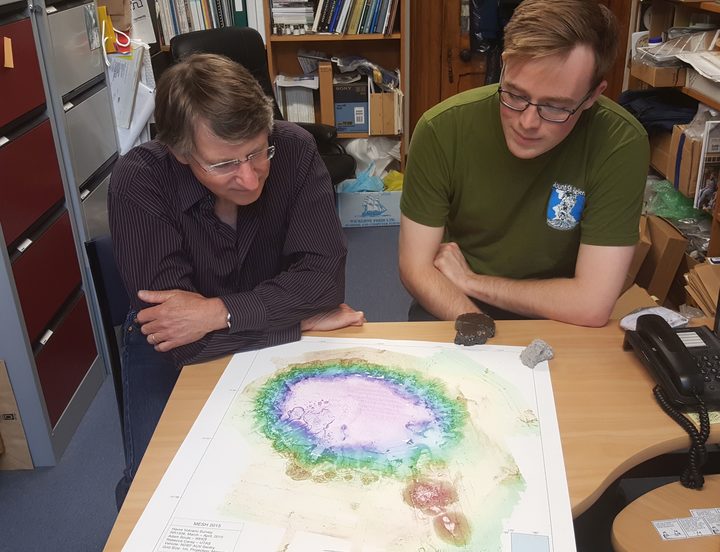 James White and Arran Murch with a detailed map of Havre volcano showing how it looks after a big eruption in 2012. Photo: RNZ / Alison Ballance

“This is the best we’ve had”

“In terms of submarine eruptions, this is the best we’ve had.”

Arran has been working on a Marsden-funded project called ‘Digging into the biggest explosive submarine eruption ever "seen" to understand seafloor volcanism.’

As part of that project, he took some of the Havre pumice, ground it up, melted it to a thick, sticky lava-like consistency - and then added water and gas to see what kind of ash was produced in the resulting explosion.

Arran says he could then “compare the laboratory-produced ash with the natural ash, to see if we can isolate the processes that are generating the ash.”

One of the results of this ash work, says James, was to show that a lot of the ash was formed from extremely small particles. “When collecting it [from the sea floor], this stuff would leave scrapes behind, like you’re dragging your fingers through modelling clay.”

Arran adds that another unusual discovery was hair-like particles. And even though the lava had been very viscous and sticky, other ash particles had a raindrop-like shape that suggested they had been formed from a fluid material that behaved more like water. “It’s obviously been erupted out at quite high velocities.” 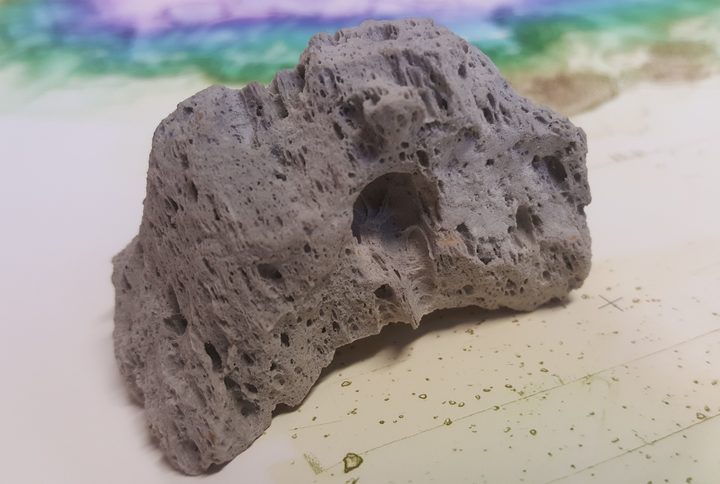 Did it explode or did it flow?

There are two main styles of volcanic eruption – explosive and effusive. Explosive is self-explanatory, while effusive means that lava flows steadily out of the vent. The international team of geologists studying the Havre eruption are trying to determine which style of eruption it was, and at the moment they have two contradictory sets of evidence.

While the ash supports the idea of an explosive eruption, the pumice and lava suggests a more effusive eruption. 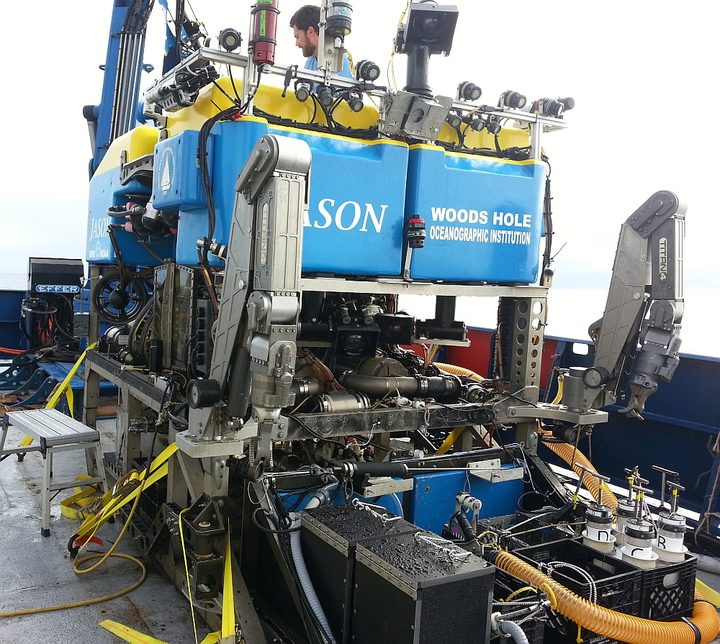 The remote-operated vehicle (ROV) Jason is operated from the ship, and can take photos and collects samples. Photo: James White / University of Otago

The role of water in volcanic eruptions

The team is also investigating the role of water in the eruption. James says he is interested in submarine volcanoes because most of the earth’s surface is covered in ocean – and it has been that way for much of earth’s history. Eighty percent of the world’s volcanoes are found in the ocean.

That matters, he says, because “we know that a volcano erupting underwater faces a very different environment from those erupting on land.”

The sheer mass of water sitting above submarine volcanoes, for example, exerts an enormous pressure that volcanoes on land don’t have to deal with. The assumption had always been that this would make a deep underwater eruption quite passive, with lava flows rather than explosions.

Impression of submarine Havre volcano - the highest peak is about 650 metres below the surface. Photo: Rebecca Carey, University of Tasmania / Adam Soule, WHOI

James says that knowing how water interacts with an eruption is also important, for understanding how groundwater might interact with a terrestrial volcano.

“Sometimes it just hisses and makes a bit of steam,” he says. “And sometimes it blows up.”

He says that understanding how volcanic eruptions interact with water is especially important in places like Auckland, where a future eruption might interact with ground water or occur in shallow sea.

James adds that the knowledge gained from studying a recent eruption, like Havre, will help geologists study volcanic cold cases, and recreate what might have happened during ancient eruptions. 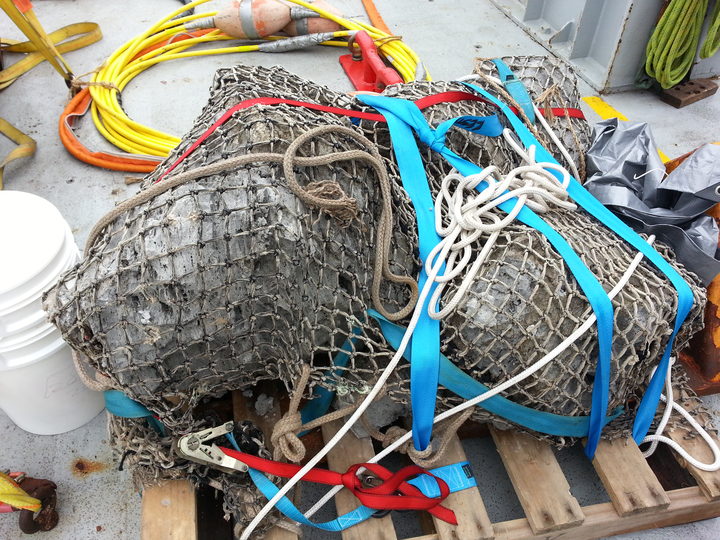 Ring of Fire expedition to Kermadec volcanoes in 20015.

Life in the deep ocean of the Kermadec Trench.