University of Otago researchers are developing a flexible food wrap, using by-products from the corn and shellfish industries.

Their edible bioplastic brings a whole new dimension to heat-and-eat meals – and will be an alternative to existing petrochemical-based plastics. 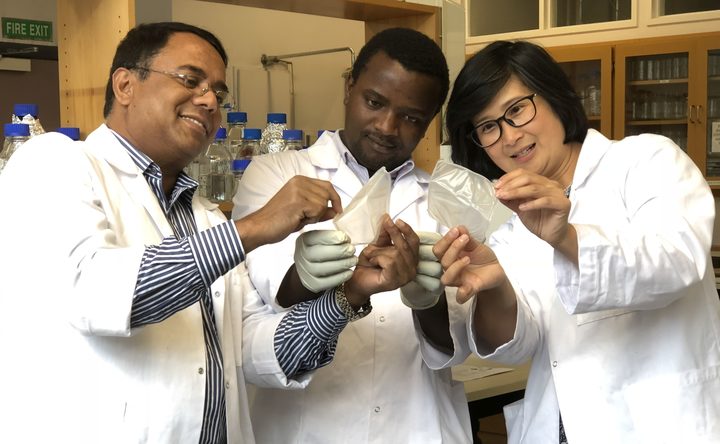 The theme for this year’s World Environment Day, marked on 5 June, is ‘Beat Plastic Pollution’. A number of companies have signed up to the New Zealand Plastic Packaging Declaration, and are agreeing to commit to using 100 percent reusable, recyclable or compostable packaging by 2025 or earlier.

This is music to the ears of Indrawati Oey, Azam Ali and PhD student Stephen Gitonga Giteru, who are all in the Department of Food Science at the University of Otago.

They are developing a flexible food wrap that will be edible and readily compostable. They say its other benefit is adding value to low value by-products from existing industries.

Stephen’s edible wrap has three main ingredients. Zein, a protein found in corn, chitosan which is a carbohydrate from shellfish, and poly-vinyl alcohol or PVA. And no, it’s not PVA glue – this PVA is a water-soluble polymer that is already commonly used as an additive in food and cosmetics.

Stephen has been developing the best formulation of these three ingredients. The small sheets he has made look and perform like a soft plastic wrap, and Stephen says that if you didn’t know the ingredients you wouldn’t be able to differentiate his edible wrap from typical petroleum-based plastic.

“There has been a lot of fundamental research into the chemistry, to manipulate the molecules and create this kind of flexibility,” says Azam.

The idea is that the edible wrap essentially becomes another ingredient in a heat-and-eat- dinner.

Indrawati says the key aspect of their packaging is digestibility, and they have been testing this is in the lab using a system that is essentially an artificial stomach and small intestine. No human has yet tried eating the wrap - that testing will come later.

Stephen says he has been checking that the wrap is strong enough, that it stays stable when it is wet, and that it adequately protects food from the surrounding environment.

He has also been testing how fast the material degrades under normal microbial conditions, such as in soil, and he says it degrades very quickly without needing an industrial composting system.

The next stage is to check the safety of the wrap, and the team recently received a University of Otago Toxicology Grant to investigate the toxicity of the films.

“This toxicology test is a crucial step before we use it either for food or feed,” says Indrawati.

The research team acknowledge that the biggest problem is likely to be getting people used to the idea of eating the packaging that comes around their food.

So, heads up everyone - when edible wrap starts turning up with our meals, we will just have to get our head around consuming it as part of the main course.