Conservationists hope that small seeds plucked from a native mistletoe growing on a dying tree on the side of the Hutt River, will be the nucleus of new populations of the regionally rare species in Wellington city. 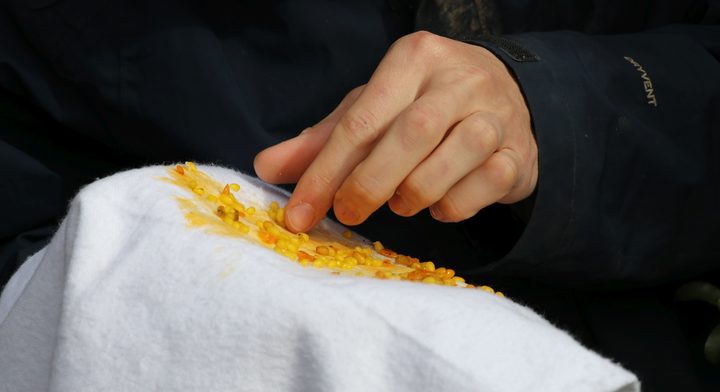 After the mistletoe seeds are harvested, they have to be rubbed to remove the skins and make the sticky mucus appear. Photo: Cam Hayes / Zealandia

I arrive at Zealandia sanctuary, on a sunny autumn day, to find a group of people clustered around a 2-metre tall tree growing on the edge of a grassy area known as the Takahē Lawn.

Rhys Mills, from Ngā Manu Nature Reserve on the Kapiti Coast, has what looks like a nappy slung over his arm. It is smeared with what can only be described as a baby-shit yellow mess.

He carefully picks something out of the yellow smear and leaning into the young kohuhu tree he presses it against a small stem. 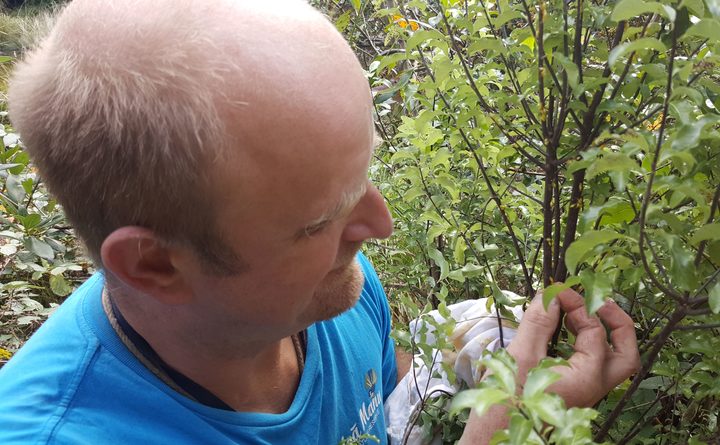 It takes me a second to work out what is going on. I know that I have come to witness a rescue mission for pirita, the green-flowered mistletoe, so clearly this is no regular soiled nappy.

It turns out that it is actually a precious collection of seeds, and Rhys is demonstrating to the gathered botanists how to fill the role that a bird usually takes: sowing seeds into the canopy of a tree. 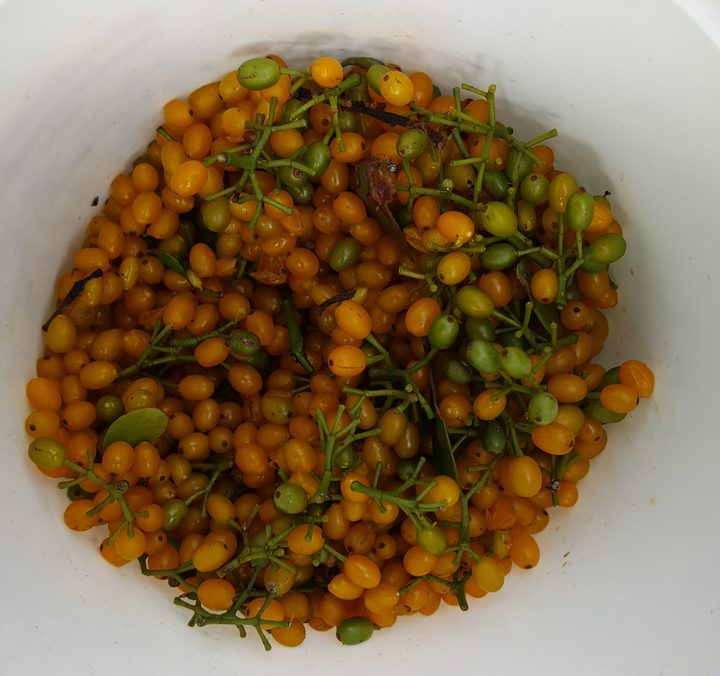 A bucketful of mistletoe seeds, collected from a plant whose host tree is dying. Photo: RNZ / Alison Ballance

Zealandia botanist Pascale Michel shows me a plastic pottle, filled with hundreds of small shiny golden-orange fruits. She explains that these are from a green mistletoe, pirita or Ileostylus micranthus. They were collected that morning from a large plant perched in a dying tree lucerne on the banks of the Hutt River, in Upper Hutt.

Mistletoes grow on other plants, and if a host tree dies, it's curtains for the mistletoe that has made its home there. 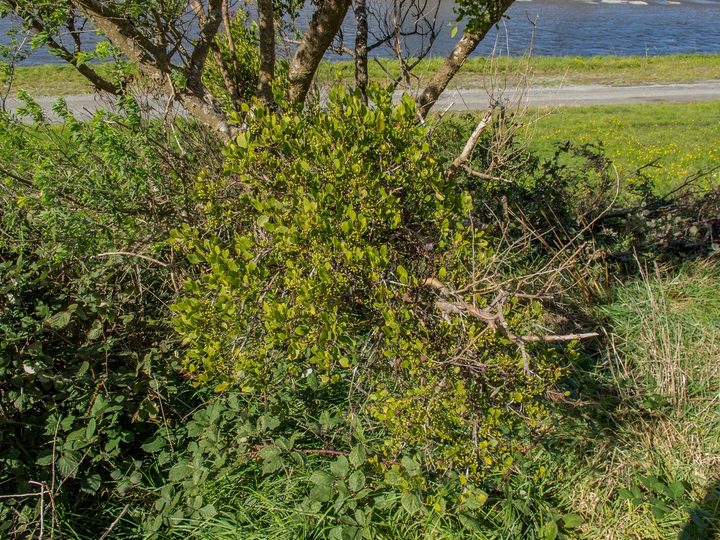 The host tree of this green mistletoe is dying, so botanists have collected seeds from it in the hope of establishing new plants in Wellington city. Photo: Alan Sheppard

Green mistletoe is surprisingly abundant in exotic trees planted as flood protection along the banks of the Hutt River, but it is absent from Wellington city. So a group of conservationists have decided to give the doomed mistletoe plant a chance to spread its offspring much further afield than would normally be the case.

Rhys says mistletoe seeds are usually spread by birds which eat the fruits and poop out the seeds during their travels.

Once upon a time, he says, the extinct piopio (New Zealand thrush) would have been an important seed disperser. Today, tui and perhaps European thrushes and blackbirds play that role.

The secret is the sticky glue 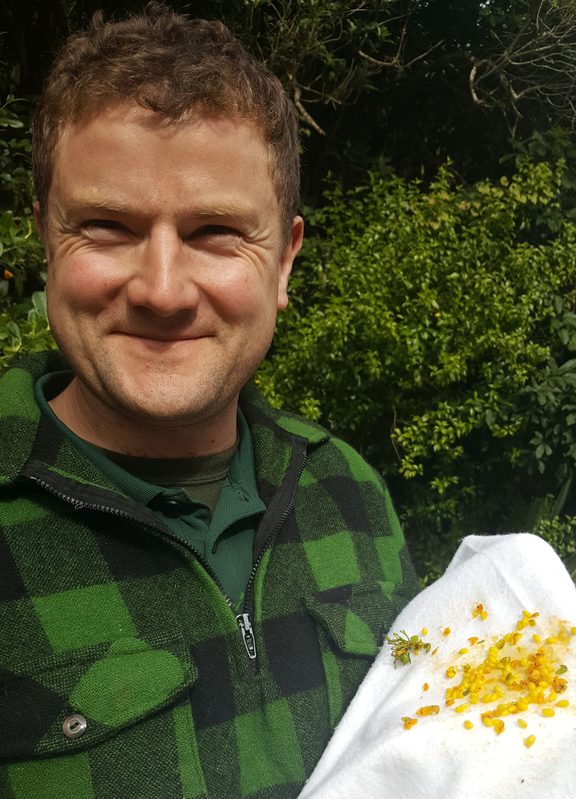 Finn Michalak with mistletoe seeds that are ready to attach to trees. Photo: RNZ / Alison Ballance

Mistletoe seeds are perfectly adapted to being bird-dispersed. During a fruit’s passage through a bird’s gut the yellow skin and flesh are digested, revealing a large single seed coated in a sticky mucus, like a natural glue.

If luck is on the seed’s side and the bird poops on a suitable branch, this glue allows the seed to stick itself on.

In the absence of a bird gut, the mistletoe rescuers have to extricate the seeds and massage them to release the sticky glue. Hence the nappy.

Finn Michalak, from Otari Wiltons Bush, pours some fruit onto a clean cloth, and begins to knead them with his fingers, rubbing them against the fabric until the seeds are free of the flesh. He explains that the more he works the seeds, the stickier they become.

The next part of the process is to patiently ‘plant’ the seeds one-by-one onto various host trees, by gluing them to branches.

The life of a parasite

Rhys says that New Zealand’s native mistletoes are hemi-parasites – they have a special root that they push into the trunk of their host tree, to steal water and sugars, but they also have green leaves and produce much of their own energy from photosynthesis.

He reminds me that the only native flowering plant that is a true parasite is Dactylanthus, often known as wood-rose, a threatened plant that we have previously featured on Our Changing World. 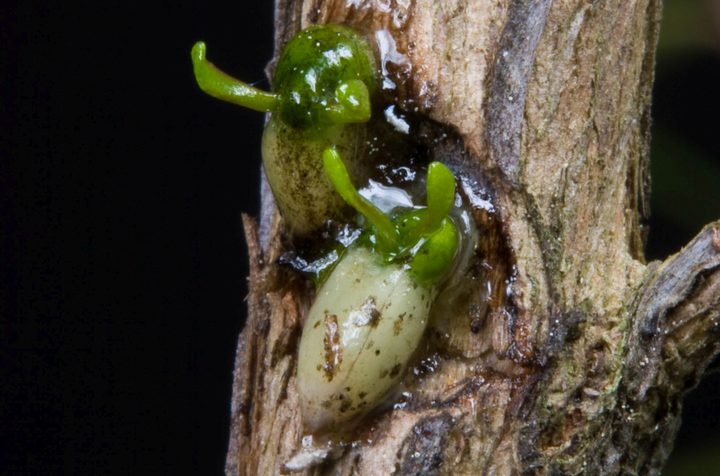 Rhys is optimistic many of the green mistletoe seeds will germinate, but he says next summer will be critical for their survival. With no soil to protect their new root the tiny seedlings are vulnerable to drying out until they have fully established their lifeline into the host tree.

Despite the challenges, Rhys says he has been successful at Ngā Manu in establishing both the green mistletoe and a tiny red-flowered mistletoe. He plans to carry on – learning along the way - until his mistletoe garden contains all eight surviving species of native mistletoe.

Pascale says she's excited to be returning a ‘missing’ plant to the forest at Zealandia and re-establishing lost ecological connections. And like Ngā Manu, Zealandia and Otari Wilton’s bush have ambitious plans to reintroduce other species of mistletoe as well as the green mistletoe, to add to the growing richness of their forest ecosystems. 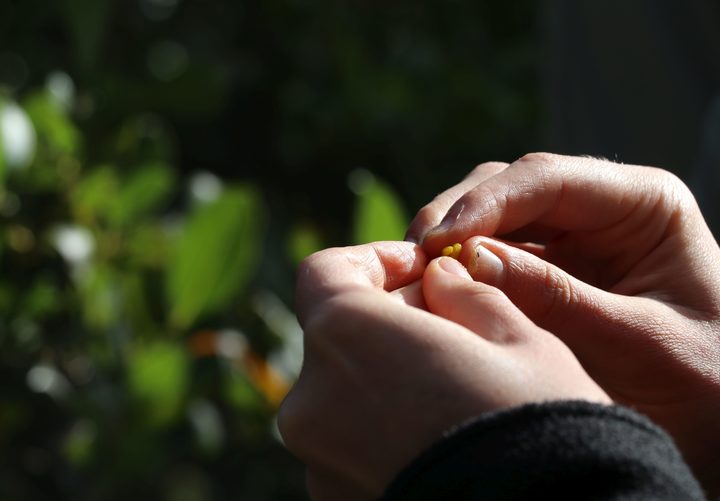 Zealandia and Otari Wilton’s Bush have also been collaborating on returning the rare kohurangi or Kirk’s daisy to Wellington. 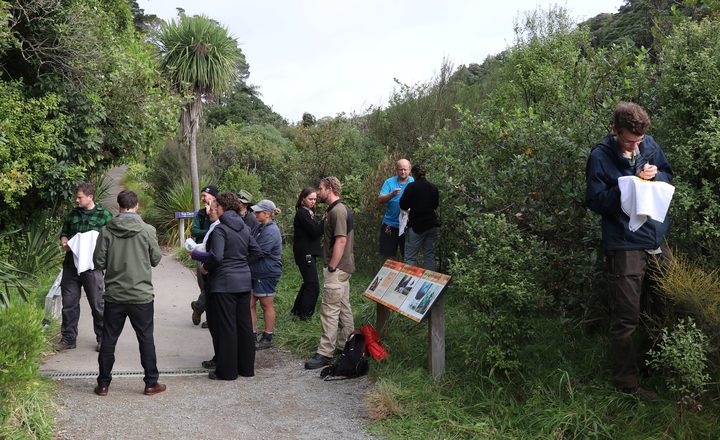