'My favourite insect is a cicada'

Olly Hills is mad keen on insects, and there is no doubt in his mind about the best kind of insect.

“My favourite insect is a cicada.”

The 11-year-old Hamilton boy published a field guide to New Zealand’s cicadas last year, and he is on a mission to hear and see every one of New Zealand’s 42 cicada species. 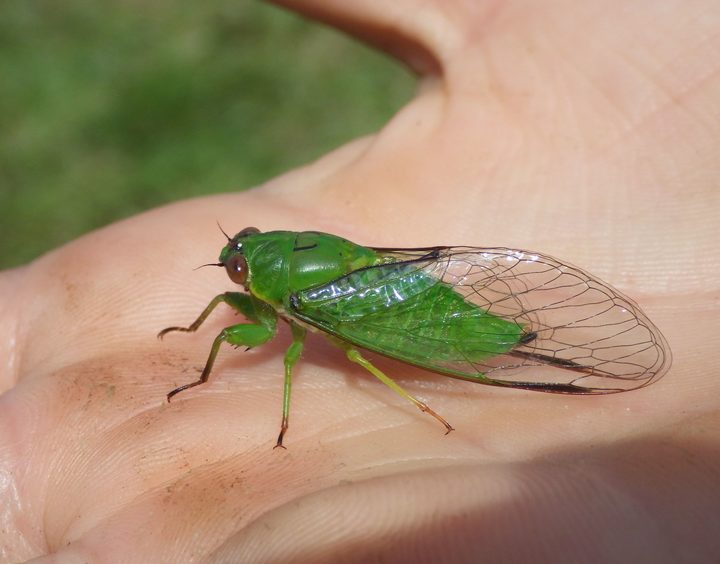 The April green cicada (Kikihia ochrina) has a very high-pitched call that children can hear, but most adults can't. Photo: Tara Hills / Cicadas of NZ 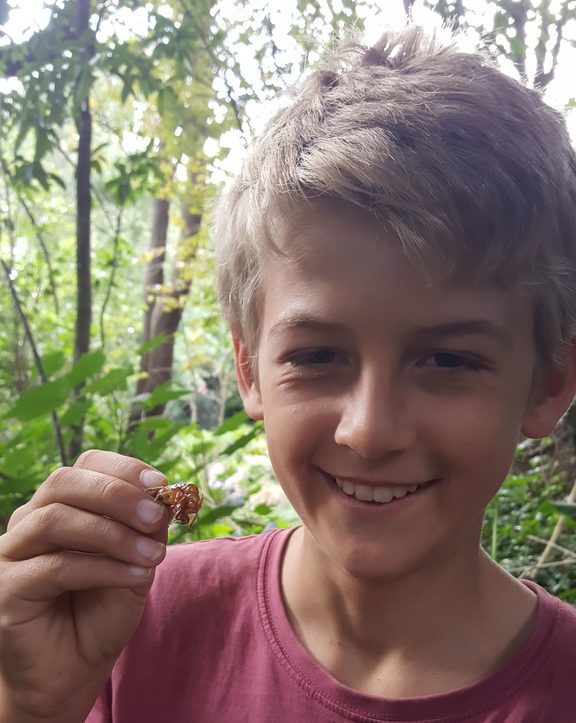 Olly Hills with the shed husk of a cicada, left behind as a nymph emerged as an adult after many years in the ground. Photo: RNZ / Alison Ballance

Olly Hills has always been fascinated with cicadas - and it was this fascination that led him to write his book Cicadas of New Zealand.

“I decided to write the book after so many times saying to my mum that there needs to be a book on cicadas.”

“I was learning lots about cicadas and I needed somewhere to put it all,” says Olly.

Olly says it took just over a year to write the book, and he admits “that it did take quite a bit of work.”

Olly says that what interests him about cicadas is that they are “just a common insect that anybody can find. Anyone who’s interested can make a discovery.”

It’s autumn when I visit Olly at his Hamilton home, and getting late in season for cicadas. I can’t hear anything, but Olly reports that he can hear an April green calling.

“There’s a species of cicada called the April green, which calls year-round, but mainly in April,” says Olly.

“It’s too high-pitched for adults to hear. Round about the age of 18 you start losing your ability to hear it. 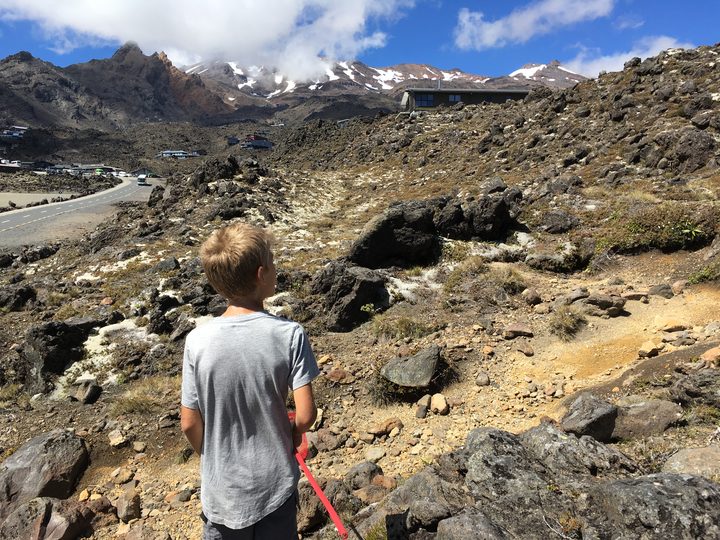 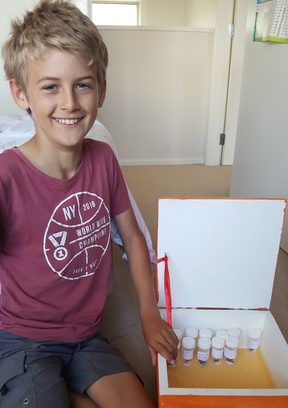 Olly Hills with his cicada collection, which he plans to expand. Photo: RNZ / Alison Ballance

Olly says that the greater bronze cicada and red-tailed cicada are also too high-pitched for some adults to hear.

To make their distinctive sound, Olly says that male cicadas have two sound-producing organs called tymbals, which he describes as a series of plates on top of each other.

“When the tymbals are contracted and suddenly let go they pop back into position with a kind of clicking, popping noise.”

The noisiest cicadas are the clapping cicadas. Olly explains that as well as making the normal cicada sound, they also bang the edge of their wings on branches to make a clicking noise.

Most of the loud cicada noises we hear are produced by the males – females reply to the male calls with quieter wing clicks.

Most cicadas are vocal and active on warm sunny days, but Olly says the lesser bronze cicada is a shade singer that prefers shade. 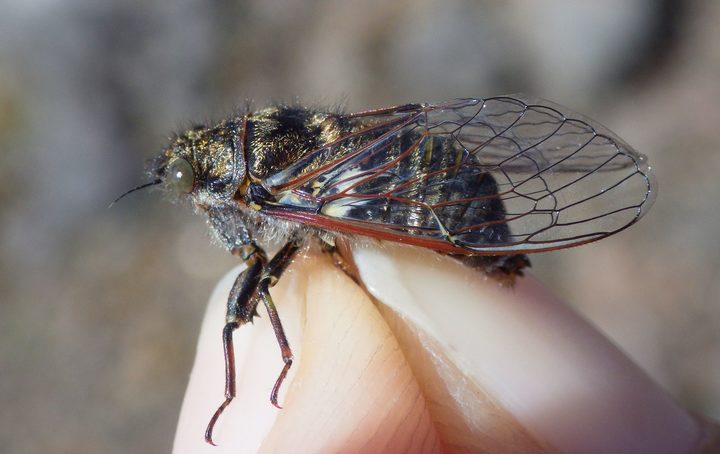 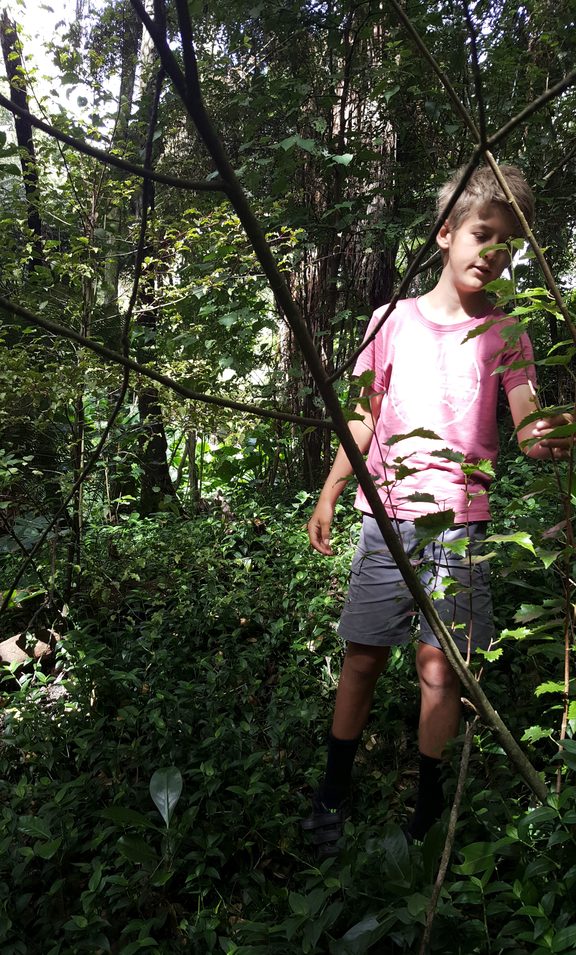 In his element - Olly Hills looking for insects in the steep gully behind his Hamilton home. Photo: RNZ / Alison Ballance

“You can just treat it like a pet, and it doesn’t ask for very much.”

Olly explains that it is easy to keep a Hamilton’s cicada – it just needs gravel in the bottom of the enclosure and a few bits of shrubbery.

Olly says that the cicada will call in captivity “but you don’t normally want them calling because they call in the middle of the night.”

The downside to a cicada pet is that an adult cicada only lives for about two weeks.

There are still some species that Olly has yet to see or hear, especially in the South Island.

Olly runs a cicada website, and he also has a Facebook page where you can purchase copies of his book and talk about cicadas.

He recently presented a talk on cicadas at the New Zealand Entomological Society conference, and appeared on the children’s TV show Fanimals (Olly is in the last 5 minutes of episode 36 in season 2018). 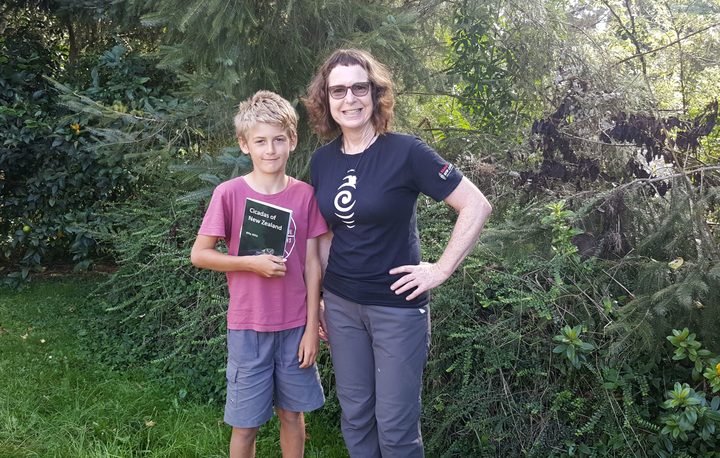 Alison Ballance with 11-year-old author of 'Cicadas of New Zealand', Olly Hills. Olly spends a lot of time hunting for insects in the gully behind. Photo: RNZ / Alison Ballance

Chris Simon is a cicada researcher who splits her time between New Zealand and the United States.

She runs the Cicada Central website that includes many audio recordings of New Zealand cicadas – and I can report from experience that this includes a number of calls that teenagers and children can hear that are inaudible to adults.

Chris has been on Our Changing World talking about her research and the cicadas in her Wellington garden.