When it comes to rescuing and restoring centuries-old waka found buried in water or mud, Dilys Johns is both first-aid responder and doctor.

Her work is important, not only for preserving ancient Māori taonga and restoring them to their iwi, but for building an understanding of the evolution of waka design from the time of earliest Polynesian settlement in New Zealand. 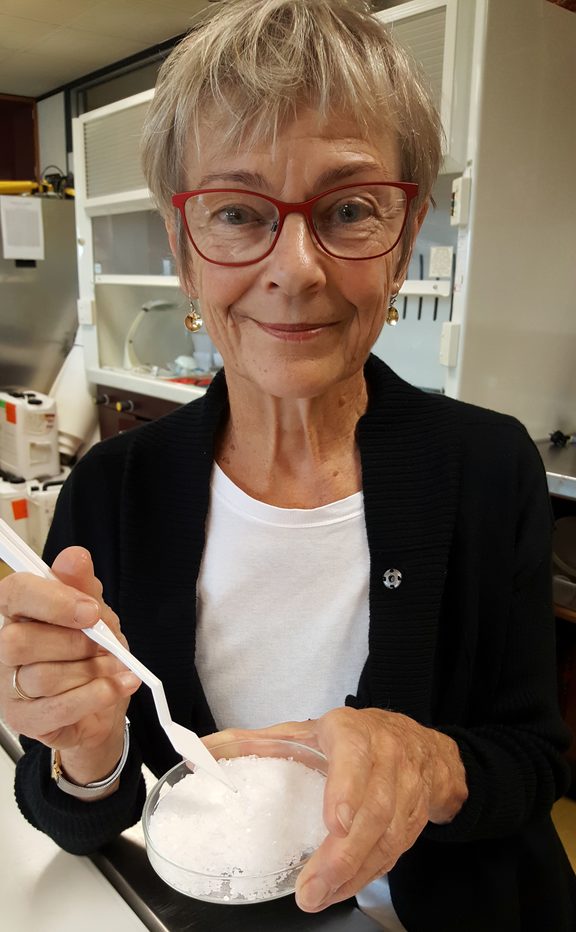 Archaeologist Dilys Johns with polyethylene glycol, known as PEG, which is used to replace the water in waterlogged artefacts. Photo: RNZ / Alison Ballance

Dilys Johns, an archaeologist at the University of Auckland, specialises in the conservation of wet organic archaeological materials. Organic materials such as wood and flax were important to Māori, who didn’t work with stone or ceramics, Johns says, and the taonga she works with range in size “from small combs to waka.”

Johns' skills in ‘wet organics’ are in high demand, and she works around the country, often responding at short notice when something is found.

Water is her friend, oxygen is her enemy, and her best ally is PEG, or polyethylene glycol. This non-toxic chemical – used in skin creams and toothpastes - is used to replace water within cells.

When an artefact such as a waterlogged garden implement is discovered, Johns is immediately on the phone offering advice. It is not enough to keep something damp – it needs to be fully immersed in water. If the object is small and portable, it is delivered to her in Auckland to be cared for in her purpose-built laboratory.

The lab contains three long tanks, filled with water, PEG and medium-sized artefacts that are in the process of being conserved. Tiny items have their own small plastic containers. Other important equipment includes a frost-free freezer, a freeze drier and microscopes.

Johns explains that wet environments and very dry environments help preserve organic material, as they prevent microbes breaking it down.

“When wood is in the ground it slowly degrades. The cellulose degrades, and water floods into the cells. So the artefacts keep their shape because they’re loaded with water.” 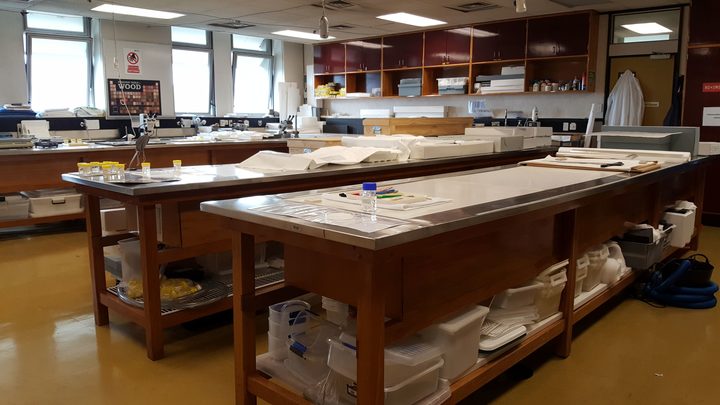 The problems start when the item is taken out of that protective water.

“When it’s taken out of the ground and the water evaporates, the cells collapse.

“And that collapse is not like shrinking – it’s irreversible cell collapse. And it manifests itself in the form of cracks, delamination, warping and all the things that we associate with degraded wood.”

The first step is to stabilise the artefact in PEG. Time is an important element in the work – it can take years for the PEG to slowly infiltrate into a large artefact and, through the simple process of exchange, replace all the water.

Once that is done, the item is frozen, and then put in a freeze-drier. “Then they go home to their marae."

Johns says this is the most important part of the process, because to iwi “these are not just artefacts, they are their ancestors.”

Once the conservation work is completed, it's important the taonga are in a temperature-controlled environment, preferably close to 20°C with a relative humidity of 55 per cent. Artefacts remain very fragile, Johns says, as the PEG helps it keeps their shape but does not add any strength. 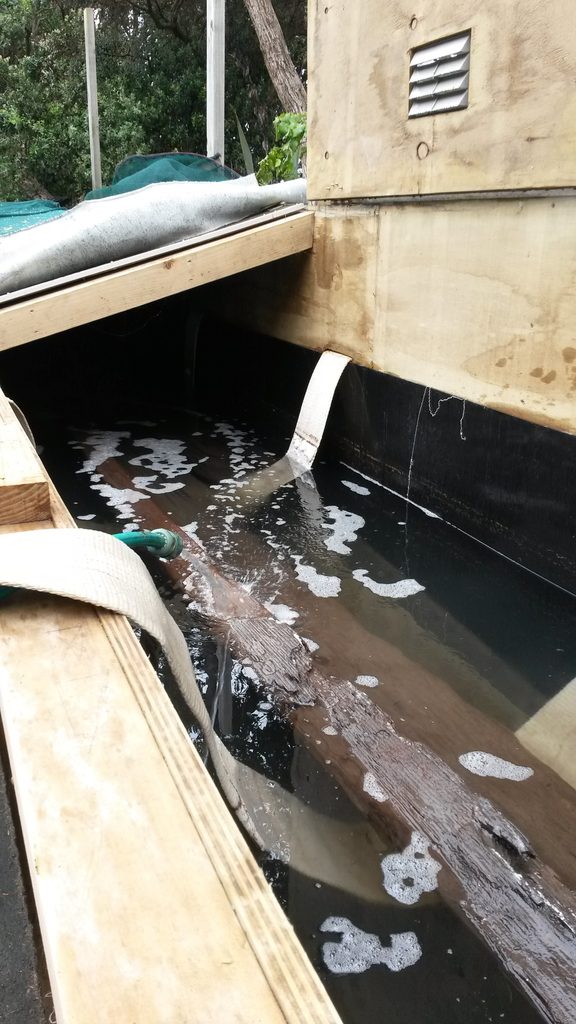 The Muriwai Beach waka submerged in a chemical bath in a specially built tank. it took a number of years of soaking for the chemical to fully replace all the water in the wood. Photo: Dilys Johns / University of Auckland

At the moment, the tanks in Johns' lab contain various horticultural implements such as fern root beaters, a fish trap, several small waka and some bowls. But this is not all she is working on – she has six satellite labs set up at various places around the country, conserving waka too large to be moved. Simple tanks are built on site so the waka can be soaked in PEG for as long as is required.

One such waka was discovered a few years ago on the beach at Muriwai, west of Auckland. It is a carved dugout made from a single kauri tree. The artefact is nearly 7m long but is missing one end so would have been longer.

Kauri was a favoured timber for waka, as it was light and floated well. Johns has also worked with waka made from rimu, totara, and matai.

The Muriwai waka is just the hull of what would have probably been a sailing canoe or waka ama, with an outrigger for stability. It was lightly built and probably used for local coastal travel, Johns says. It has a square mast step carved into the base, and would have had extra raised sides, as well as a prow and stern.

It is difficult to date, but evidence suggests it was a relatively late design, possibly built just before Europeans arrived in New Zealand.

A matai plank that formed part of the oldest waka yet found in New Zealand, from Anaweka. Photo: Johns et al PNAS 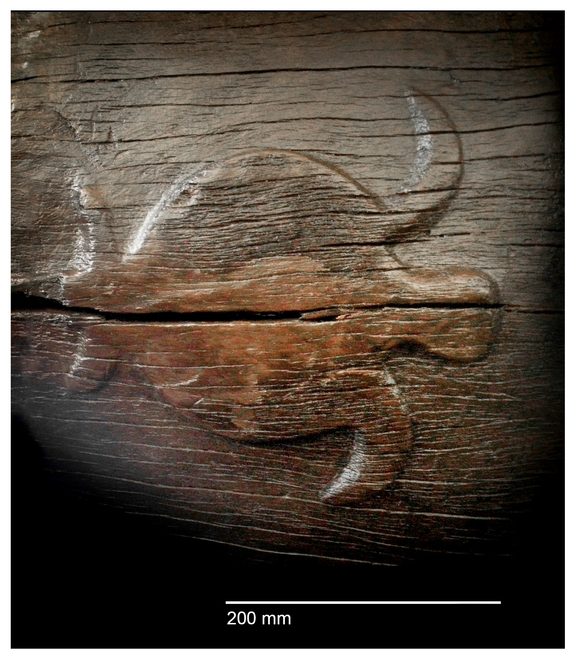 A turtle carved on the Anaweka waka, which is the oldest waka found in New Zealand. Photo: Johns et al PNAS

The earliest waka Johns has worked on is a matai plank found at Anaweka, near the top of the South Island's West Coast. The 6m plank came from the back of a canoe, and was carved with a turtle. It dates back to AD 1350-1400.

Johns and collaborators say this waka was a sophisticated canoe, at least 14m long, that would have been capable of ocean and long-distance coastal voyaging. They suggest it was an early application of East Polynesian canoe technology to New Zealand materials, such as larger trees.

Part of a matai waka of similar age and technology from Doughboy Bay on Stewart Island is now in Southland Museum.

The restoration work Johns carries out is funded by the Ministry for Culture and Heritage. If ownership of the artefact is disputed, the Māori Land Court will decide which iwi will receive it. The Muriwai waka restoration is complete, and the waka is being stored while the two iwi who have been awarded joint ownership decide where to house it.

Johns has helped conserve 15 waka and sees it as "a huge privilege".

"I feel incredibly lucky to do this work.

“[The work] has of course provided a lot of information for research, but it’s nice to be out of the university with the people whom these taonga belong to.”

She enjoys getting both sides of the story around each waka: "I know that I can only give the scientific side, and that there’s a really important iwi side - and together we can make a full picture." 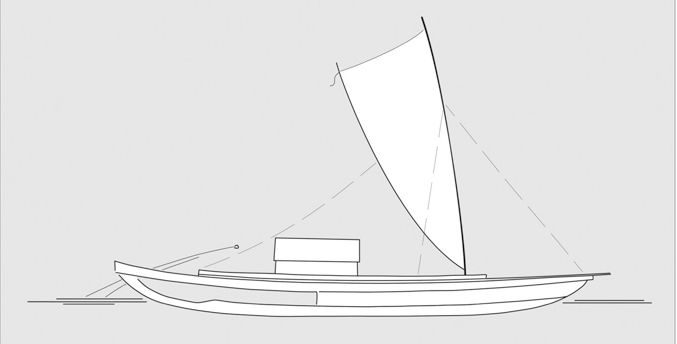 An impression of how the Anaweka double-hulled voyaging waka may have looked; the shaded area is the recovered section. By G. Irwin. Photo: Johns et al PNAS