Dragonflies have been zooming around our skies with aerobatic precision for more than 300 million years, while their mud-dwelling larvae are capable of shooting water out of their backsides for a turbo assist – no wonder these precision flying machines so delight Scottish dragonfly enthusiast Ruary Mackenzie Dodds. 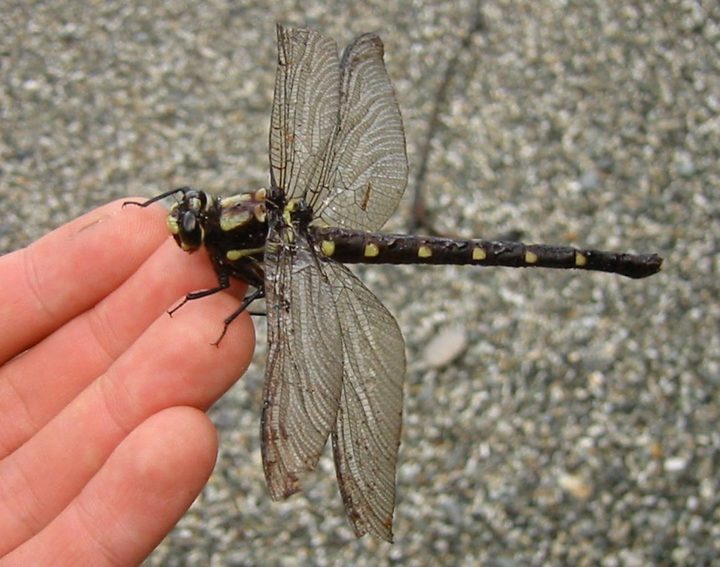 The bush giant dragonfly (Uropetala carovei) is New Zealand's largest dragonfly, and it is found in the North Island, and the west and north of the South Island.. Photo: CC BY-NC 2.0 Jon Sullivan

When it comes to dragonflies, it would be fair to say that Ruary Mackenzie Dodds is an enthusiastic obsessive.

He is impressed with their flying skills, their superb eyesight and hunting skills - and he says they are an excellent indicator of good water quality. 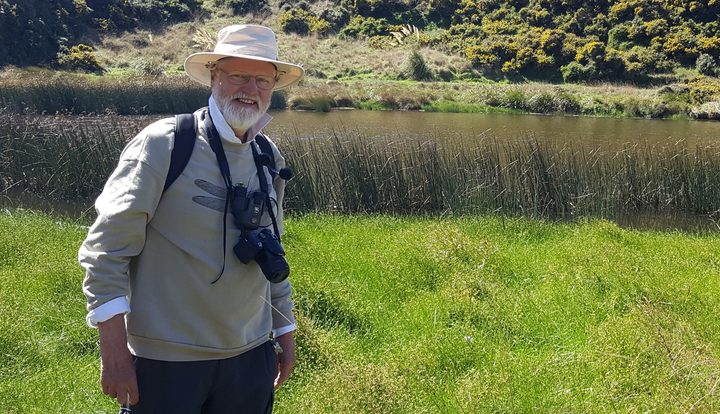 Ruary Mackenzie Dodds, with his close focus binoculars that he says are designed to study insects at close quarters. Photo: RNZ / Alison Ballance

Dragonflies belong to the insect order Odonata. “This means ‘toothed ones’ in Greek,” says Ruary. “Obviously they don’t have teeth, but they do have amazing gnashers for consuming their food.” 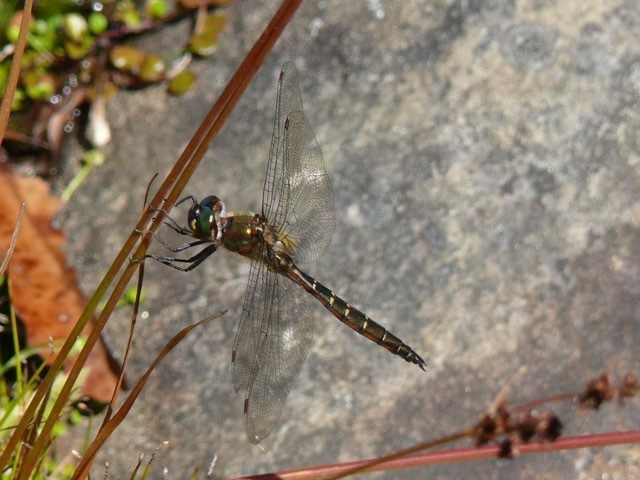 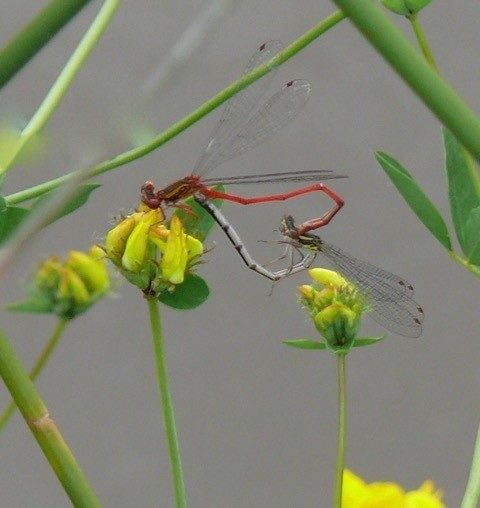 Typical dragonfly larvae spend the first two to three years of their lives underwater, before they metamorphose into a flying adult. “It’s an amazing thing to watch,” says Ruary, “when they pull themselves out of their final larval skin and transform themselves into these beautiful flying insects.”

The stocky larvae look nothing like an adult dragonfly. Ruary says that they feed using “an amazing labial mask. It’s as if you have taken your arm off and stuck it on your lower lip. This thing is very neatly folded up under their body, and when it goes into the attack – when it decides its lunchtime and a mosquito larva is passing for example - this thing will extend itself nearly half the length of the insect and grab the mosquito to bring it back to these amazing gnashers.”

It should be noted that dragonfly larvae are also known as toe-biters, and are quite capable of giving an unwary human foot a good nip. 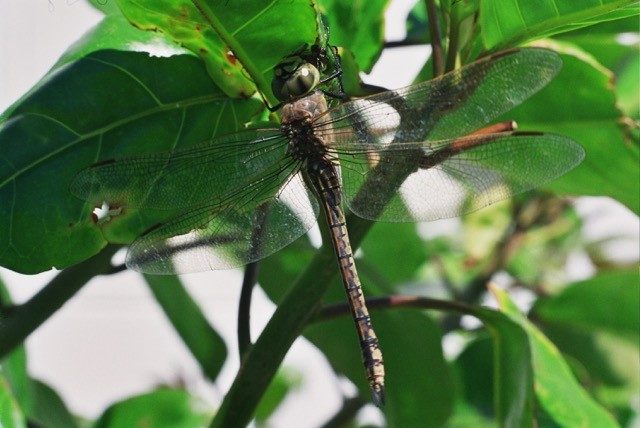 Ruary says that larvae from some species bury themselves in mud and wait for prey to pass, while others are active hunters. He says they have excellent eyesight to help them find prey.

A particularly interesting feature of dragonfly larvae is that “they have rectal gills and breathe through their backside,” says Ruary.

“And they can suck water into their backsides and then blast it out again and go hurtling through the water like a torpedo to get to their prey - or to get away from you if you try and catch them.” 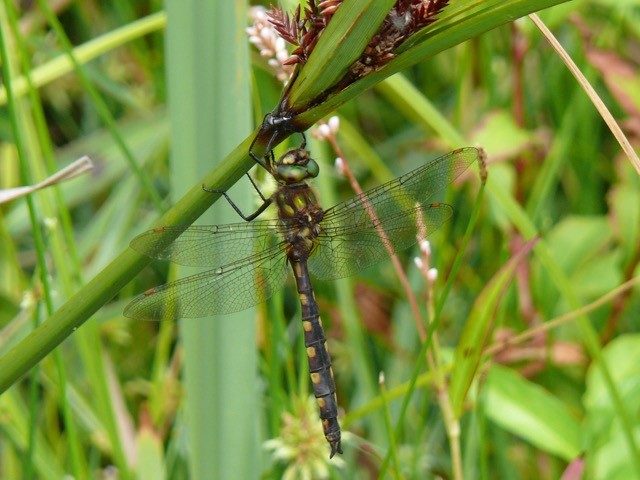 Life in a burrow

The larvae of New Zealand’s giant bush and giant mountain dragonflies, on the other hand, are not aquatic. They live in tunnels that they excavate on the forest floor, and it takes more than five years for them to develop and emerge as adults.

A female chooses a damp gully where she lays her eggs in the soil. As the larvae grow and develop they enlarge their burrow to a diameter of about three centimetres, often building a raised wall around the lip. 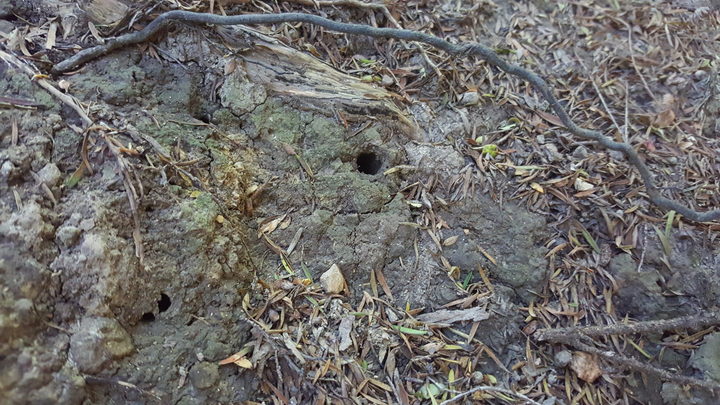 The larvae of the bush giant dragonfly live in tunnels in damp bush for more than 5 years before emerging as flying adults. Photo: RNZ / Alison Ballance

The edges of wetlands are good places to see dragonflies and damselflies. Ruary says they like shallow water, with a rich mix of vegetation, including rushes and aquatic weeds.

The warm months of summer to mid-autumn are peak times for seeing dragonflies in flight.

Ruary says the trick to spotting dragonflies is patience. His advice is to stake out a likely location, then watch and wait. 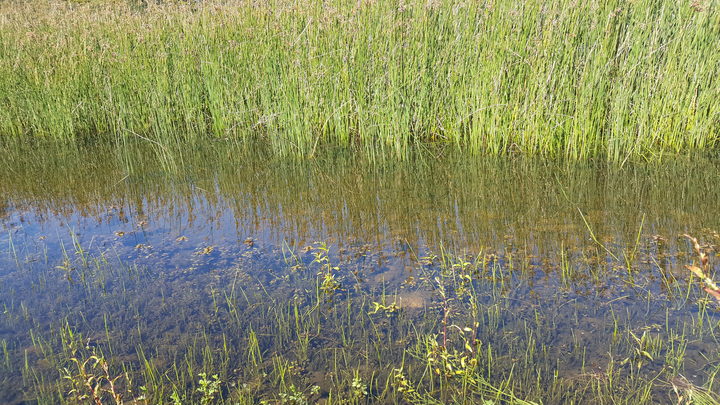 This is a perfect place for spotting damselflies and dragonflies - shallow water with a range of aquatic plants. Photo: RNZ / Alison Ballance

For dragonflies, this might include size, colour, noise and flying behaviours. For example, Ruary describes the noisy blundering of a bush giant dragonfly, while “a male lancer dragonfly zooms up and down [the edge of a wetland], darting in and out of the rushes, setting up a territory, waiting for the females to arrive.”

Damselflies are more slender and delicate than the dragonflies, and they often flit from plant to plant. 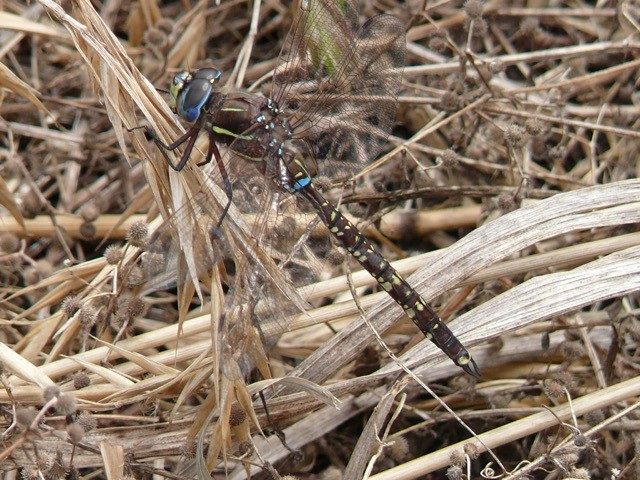 Dragonflies are fast fliers with exceptional acceleration – Ruary says that from a standing start they can cover 15 metres in less than second.

New Zealand has six species of damselflies and eight species of commonly observed dragonflies. A further four species have either arrived here very recently or are rare visitors.

Lake Kohangapiripiri is near the coast on the eastern side of Wellington Harbour. Photo: RNZ / Alison Ballance

Damselflies on Our Changing World

Find out about the fast and slow lifestyles of damselflies.