Tipping Points and the health of estuaries

Estuaries are meeting places, where land meets the sea, where freshwater meets salt, and where the daily ebb and flow of tides regularly exposes sand and mud flats to the sun before covering them again with water.

They are important and productive ecosystems, yet estuaries are increasingly under stress from nutrients and sediments running off the land.

The impacts are subtle and incremental – but could they lead to massive and sudden change?

To find out, a National Science Challenge experiment is investigating possible ‘tipping points’ in estuaries around the country. 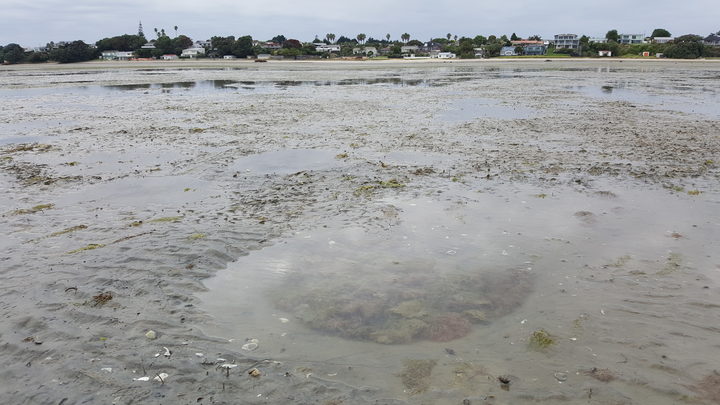 These sandy intertidal flats at Clark's Beach on the Manukau Harbour are home to shells, worms and microbes. The round pool of water is a feeding pit made by a sting ray or eagle ray. Photo: RNZ / Alison Ballance

Meet the unsung hero of the Manukau Harbour: the wedge shell, Macomona liliana. It’s not the most common shell that lives on tidal sandy flats around the country – that honour goes to cockles and pipi – but it plays a key role in cycling nutrients and oxygen. 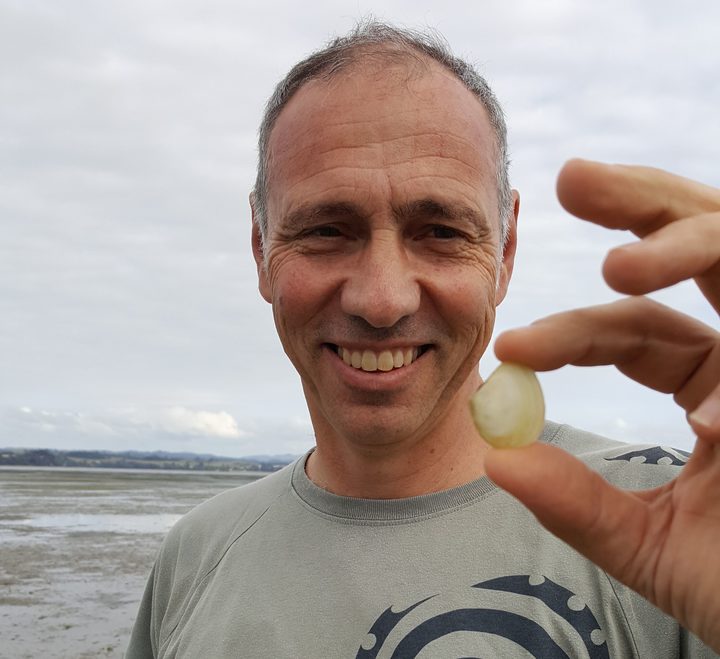 You don’t often see wedge shells, as they live buried about seven to ten centimetres below the surface, but at low tide there are plenty of signs of their presence. 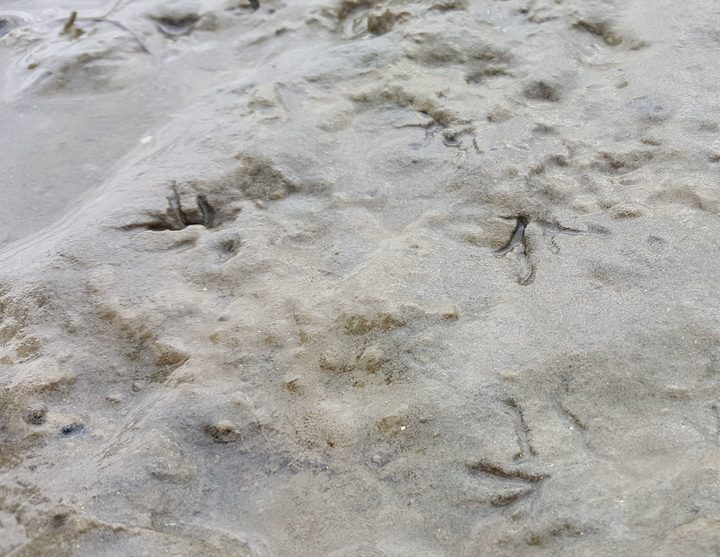 The bird-like tracks left on the mud are made by the wedge shell, as it moves its feeding siphon to suck up water on the surface which contains tiny plants. Photo: RNZ / Alison Ballance 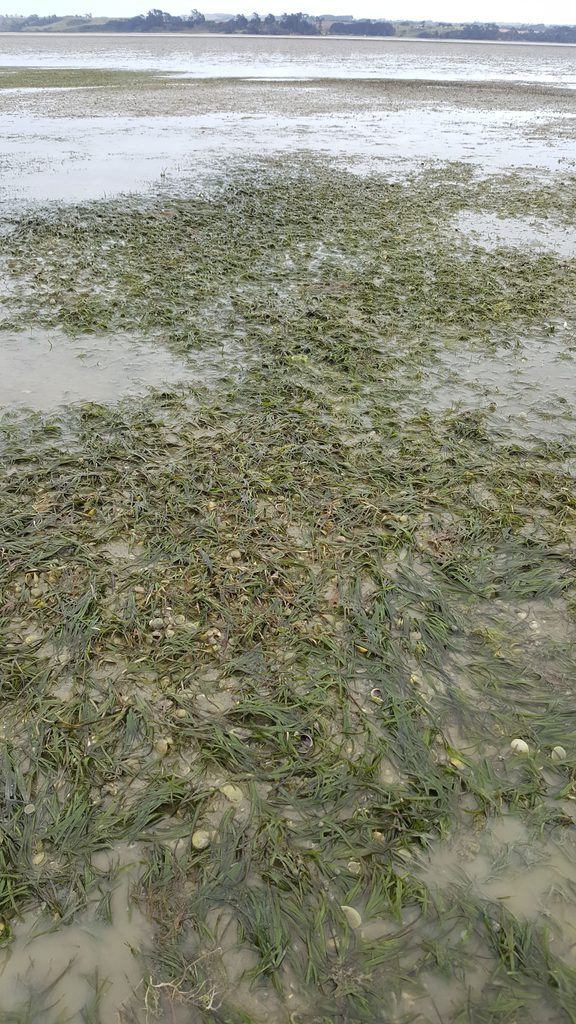 Seagrass is an important plant that grows on intertidal mud and sand flats, and is able to cope with being out of the water at low tide. Photo: RNZ / Alison Ballance

What look like numerous small bird footprints on the silty surface of the sand flats are in fact feeding traces. The bird-like tracks are made as the animal extends its long feeding siphon to the surface and sucks up shallow water containing microscopic plants – the microphytobenthos – that bloom there each low tide.

The plants are filtered out as the water is sucked across the animal’s gills, and the ‘used’ water is then pumped back out another, much shorter, siphon.

“The thing about this animal,” says marine biologist Conrad Pilditch, from the University of Waikato, “is that for all kinds of funky reasons, the exhalant siphon is at depth – probably to avoid it being eaten … so it’s bringing water in at the surface and pumping it out at depth.”

This is important, says Conrad, as it creates a pressure differential. As oxygenated water is drawn in from the surface, nutrient-rich water that fills the pores or spaces between the sand grains is, in turn, pushed back up to the surface where it becomes available to the microscopic plants.

Conrad says that the wedge shell plays a key role in the way nutrients are recycled between the oxygen-rich surface layers of the estuary, and the deeper black oxygen-poor or anoxic muds below.

“The effect of the animal is much larger than its size,” says Conrad. “The animal is only a centimetre or two in size, but the pore water pressure gradient that it produces through its feeding can extend over 10-15 centimetres.”

“This halo effect around the animal means that its influence is much greater than you might think.” 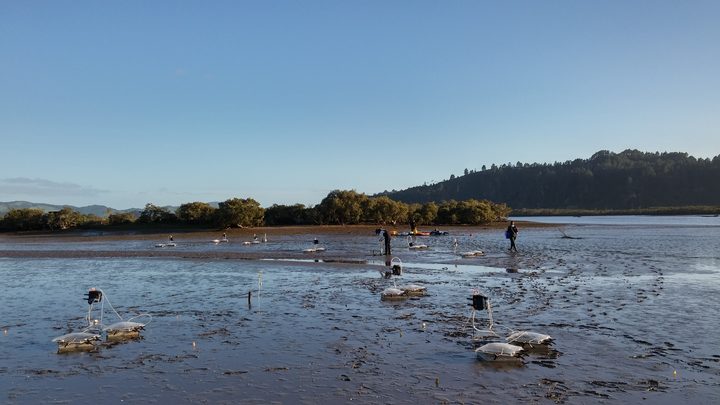 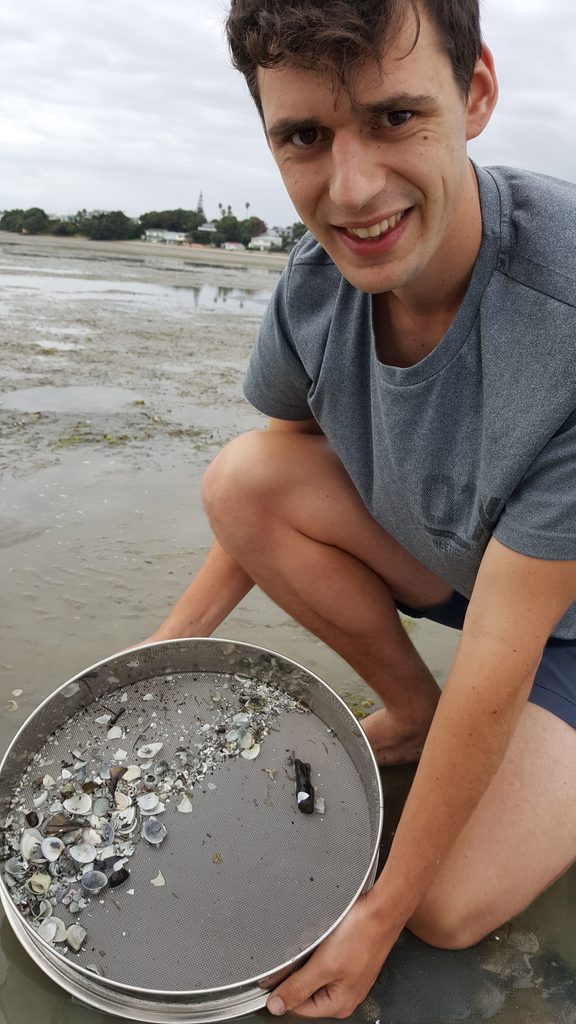 Kurt Squires holds a sieve containing all the material larger than 2mm across, from a core of sand and mud collected from Manukau Harbour. Photo: RNZ / Alison Ballance

The problem of excess nutrients and sediment

But wedge shells don’t like it when too many nutrients are added into the system - and increasingly this is happening as excess nutrients from surrounding farmland are washed into the sea.

Another problem is sediment running off the land and accumulating on the sand flats, where it smothers life, makes water muddy or turbid and disrupts the usual functions of the estuary.

Wedge shells are not the only important animals on the sand flats – microbes also play a key role, especially when it comes to cycling nitrogen. This is a two-stage process, that begins in the oxygen-rich surface layers of sediment, and is completed in the deeper anoxic layers.

Conrad says that too many nutrients running into the estuary disrupt this cycle, by destroying the oxygen-rich surface layer.

This can create a negative feedback loop – excess nutrients begin to fuel runaway plankton growth in the water, which Conrad says effectively “turns the lights off, by making the estuary more turbid.” Nutrient processing breaks down, leaving even more nitrogen to fuel more plankton growth, and so on.

Understanding all these feedback loops, and discovering how subtle and cumulative impacts over time can suddenly cause catastrophic change to the way estuary ecosystems work, is being investigated as part of the Tipping Points project. 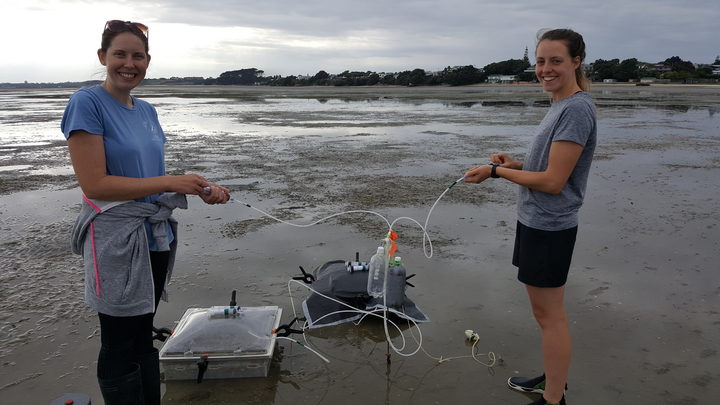 He explains that it is a nationwide experiment, taking place at 24 sites across 15 estuaries from Northland to Southland.

The sites naturally differ in how muddy the water is, and the experimenters then manipulate levels of nutrients.

“We are burying slow release fertiliser at each site to mimic increasing levels of terrestrial nutrients entering the estuary or harbour,” says Simon. “Over the next one to two years we’re monitoring the effect on the numbers of worms and shellfish, and how the sediments get rid of these excess nutrients.” 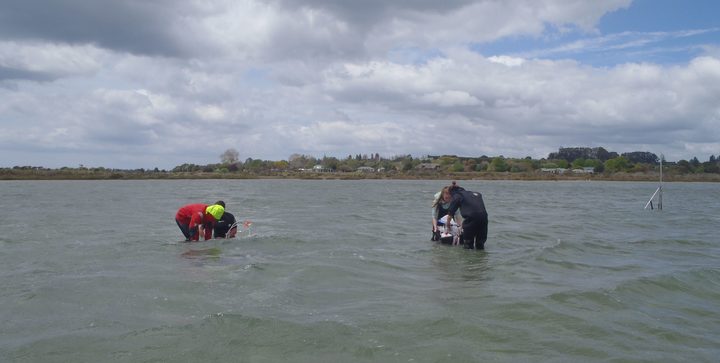 Experiments in the Tipping Point project start at low tide - and continue as the tide comes in. Photo: Sustainable Seas National Science Challenge

Simon says that evidence from around the world shows that subtle but cumulative effects can suddenly and profoundly alter the way marine ecosystems function, and their ability to cope with changing conditions.

These sudden changes are called ‘tipping points’, and they are almost always negative – for example a loss in a valuable resource such as fish or ecosystem services such as water purification.

Estuaries and tidal sand flats are important ecosystems, that are at risk from increasing sediment and nutrient run-off from the land. Photo: RNZ / Alison Ballance