Dogs that sniff out pest fish

Dogs have a great sense of smell. And koi carp are a pest fish in Waikato Lakes.

Those two phrases might not seem to have much in common, but at Waikato University they turn out to have a surprising connection.

Fish biologists Nick Ling and Grant Tempero, and behavioural psychologists Tim Edwards and Clare Browne are collaborating to train pet dogs to detect the presence of koi carp in water - and these ‘fish detector’ dogs are so good that they can sniff out the equivalent of one koi carp in an Olympic-sized swimming pool of water. 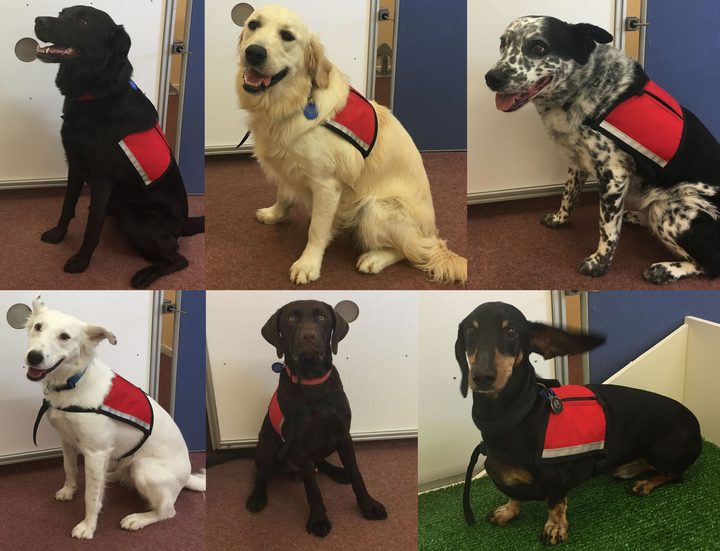 When Ruby the black labrador reports for work at Waikato University’s Dog Lab she morphs from pet to super sleuth. Her secret weapon is her nose, and a superb sense of smell.

Ruby's office, where she works alone, contains two items. One is a stainless steel carousel containing 17 water samples, hidden behind a panel that is solid except for a nose-sized sampling port. A short lever juts out from the panel. 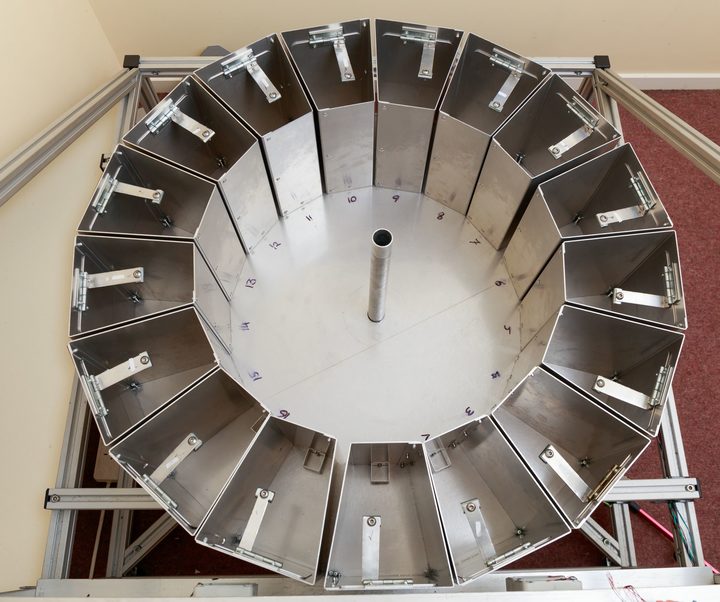 Samples of water for the dogs to sniff are put in a rotating carousel. Photo: Waikato University

In the middle of the floor there is a locked food dispenser filled with doggie treats. To get a treat, Ruby has to correctly perform a task, which is to determine which water samples smell of fish. 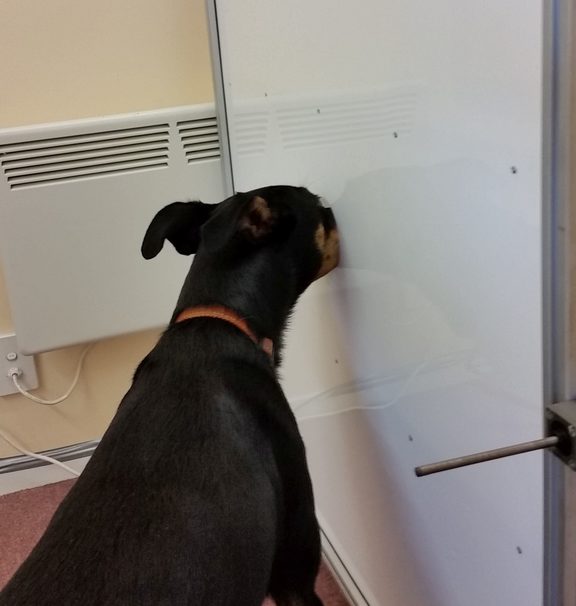 Tui the dog puts her nose into the sniffing port to see if she can detect the dilute smell of koi carp in a water sample. If she doesn't detect anything, she will nudge the lever to her right to advance the carousel (hidden behind the screen) to the next sample. Photo: Waikato University

Ruby gets to work. She puts her nose in the sampling port, breaking an infrared beam which releases an audible squeal. Within a second she has ascertained that the sample is negative, and she withdraws her nose, steps across to the lever and gives it a push.

There is a quiet groan as the carousel rotates, presenting a new sample. Ruby quickly returns to the port, sniffs – and after another negative sample, hits the lever and advances the carousel again.

This time, she can detect fish odour in the sample. She holds her nose in the sampling port, and after five seconds has elapsed the food dispenser noisily releases a single treat. Ruby runs to the dispenser, wolfs down her treat, and then returns to sniff more samples.

In the room next door, student Margaret Crawford and behavioural researcher Clare Browne watch proceedings via a remote video camera that is recording the session. They are pleased with Ruby’s work, saying that she “has proven very capable” with what is a very complex task.

“First of all we’re asking them to assess the scent,” says Clare, “and then to respond appropriately, ignore non-target scents, and also operate the equipment. If it is a non-target scent then they have to move it onto the next sample for assessment.”

Tim says it’s important that the whole process is fully automated, as it removes any potential bias from having people involved. 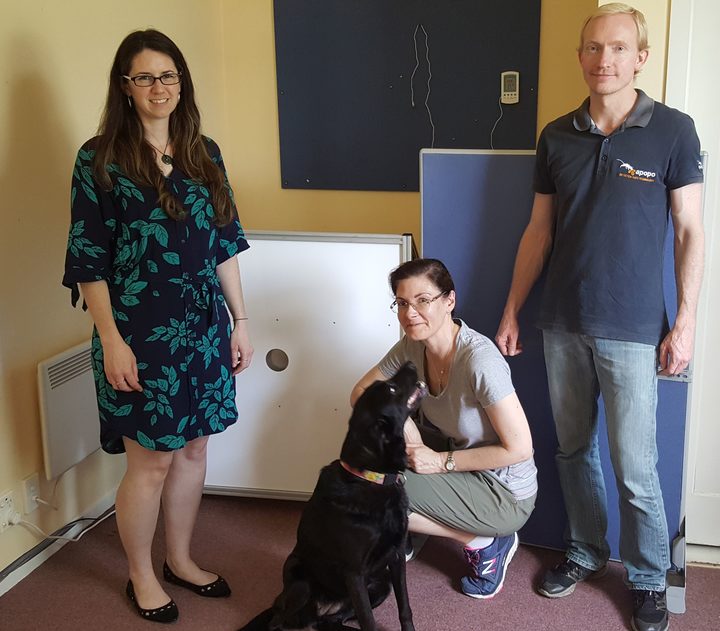 Clare Browne (left), Margaret Crawford with Ruby the black labrador and Tim Edwards standing in front of the experimental set-up - the round hole is the sniffing port for the dogs to put their noses in. Photo: RNZ / Alison Ballance

Tim explains that the air in the sampling port “contains a nice collection of molecules floating around, so as soon as they open the flap they get a decent exposure to what is available.” He says they don’t know exactly what the dogs are detecting, and although this is something they’d like to investigate in future, he also points out that it doesn’t really matter: “either they can do it or they can’t. And in all likelihood it’s a bouquet.”

Margaret says that dogs are very good at “detecting a signal in the midst of noise.” She likens their ability to detect a single odour amidst a collection of smells to our own ability to pick out the sound of one person speaking against a noisy background.

Tim says this ability makes them particularly good for field work, where there are multiple odour sources in addition to the target. He is about to start training dogs to detect lung cancer. 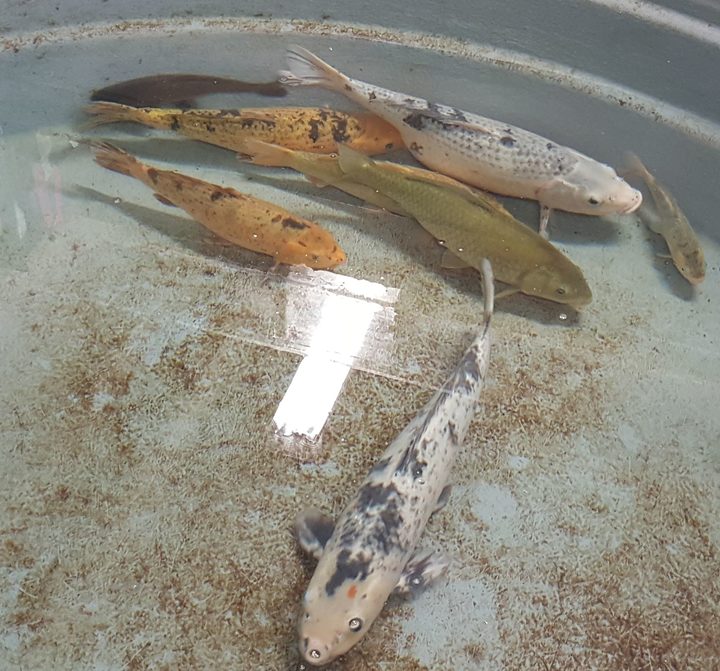 Koi carp are a pest in lakes and rivers in the Waikato. They exist in large numbers, and they stir up sediment and make the water muddy. Photo: RNZ / Alison Ballance

Fish biologist Nick Ling envisages using the trained dogs to detect whether particular lakes have koi carp in them. He says that when fish are present in very low numbers it is very hard to tell if they are there, and the detector dogs could offer “a quick and easy way” to confirm the presence of any fish. The dogs could also help identify fish spawning sites.

Identifying trace amounts of DNA in a water sample is an alternative method for detecting low numbers of fish, but Nick says a dog’s ability to sniff out fish at very dilute concentrations – one carp in an Olympic swimming pool – is twenty times more sensitive than using environmental DNA.

The dogs can also easily differentiate between koi carp and goldfish, even though these two species are so closely related that they can interbreed.

Koi carp are present in very large numbers in Waikato lakes and rivers, and Nick says that in some places the biomass of koi carp is more than half a tonne of fish per hectare. They are a pest because they stir up sediments on the lake floor, resuspend nutrients back into the water, uproot and destroy lake plants, and cause the shallow lake water to become muddy and turbid.

In a previous Our Changing World story, we heard from Bruno David about the CarpN Neutral programme to trap koi carp and convert the bodies into compost.

A black labrador called Wilma featured in a recent Our Changing World story, about testing dogs at the University of Auckland’s Clever Canine Lab to find out how empathetic they are.

The Dog Lab is keen to recruit to more dogs. If you live in Hamilton, have a dog that is very motivated by food, and are able to regularly drop your dog off at Waikato University for a few hours at a time, then get in touch with either Clare Browne or Tim Edwards.