When a big earthquake strikes, it’s important that buildings stay standing to protect the occupants. In the past, a building that could stand up to a large quake would have to be demolished afterwards.

But in the last few years there has been a revolution in the way engineers think, and the goal now is to construct low damage buildings that move with the shaking, yet remain intact and fully useable. 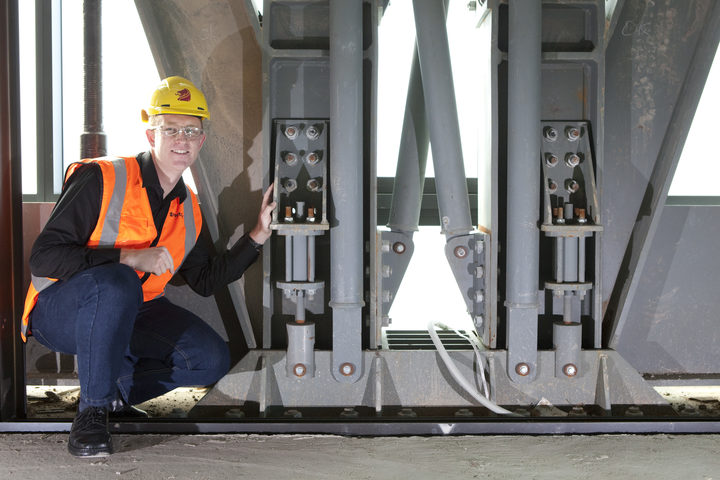 Geoff Rodgers with the lead extrusion dampers and rocking frame construction, to absorb and dissipate earthquake energy, that have been used for the first time in the new Forté Health specialist hospital in Christchurch. Photo: University of Canterbury

When central Christchurch was hit by a devastating earthquake in February 2011 most buildings in the central city – with a couple of tragic exceptions – remained standing. But in the months that followed most of them were demolished. They had done their job of saving lives, but were damaged beyond repair.

In their place a new generation of earthquake resilient buildings is rising from the rubble, many of which are using innovative new engineering solutions.

It’s an active area of research for earthquake engineers, including a world-leading team at the University of Canterbury. 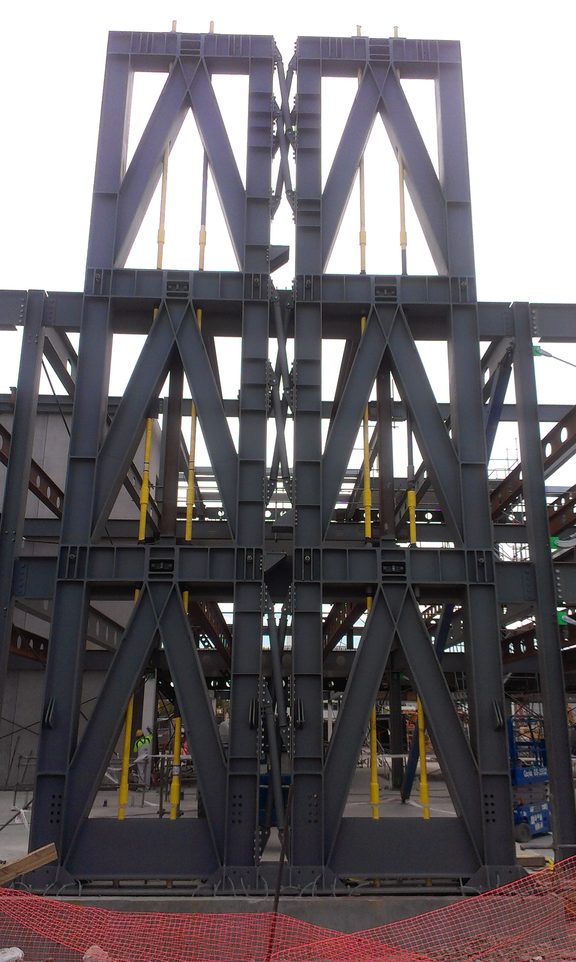 This building frame incorporates devices that allow a building to move during a strong earthquake. Photo: University of Canterbury

Among their ranks is Rutherford Discovery Fellow Geoff Rodgers, who brings a mechanical engineer’s sensibility to an area that has traditionally been the domain of civil engineers. In 2017, Geoff was awarded the Cooper Award, the Royal Society Te Apārangi’s Early Career Research Excellence Award for Technology, Applied Science and Engineering, for his work in this area.

When it comes to earthquake engineering, Geoff says that the underlying premise is that strength doesn’t equal performance. It’s a “difficult design balance” that has to take into account a complex interaction between the frequency of ground shaking during an earthquake and the period of a building (the number of seconds it takes for a building to naturally vibrate back and forth).

“We can’t modify the way the ground shakes – that’s the hand we’ve been dealt,” says Geoff. “But we can modify the way in which structures respond to that shaking.”

Another design balance is one of cost versus strength. It’s theoretically possible to build something that would withstand a large earthquake and sustain no damage – but it would be prohibitively expensive.

Geoff explains that until recently the approach to earthquake-proofing has been the life safety design principle, or the sacrificial damage approach.

“The thinking has been that in a large earthquake a building can’t be entirely damage free.”

Instead, he says, it was about carefully managing where damage would occur, and ensuring that damage to the structure doesn’t lead to collapse.

Unfortunately what damage occurred was usually inaccessible and unrepairable, and the only option was often demolition.

Geoff says a few different anti-seismic approaches are being explored.

A well-known approach in New Zealand is base isolation, particularly the lead-rubber Robinson bearings that New Zealander Bill Robinson developed, which are used in buildings such as Te Papa.

“There’s also things like friction pendulum bearings which essentially use a concave disc with a puck in them, that transmit forces but allow the building to slide.”

Base-isolation systems allow the building to slide independently of the ground. They are very effective, but suit low horizontal buildings built on flat ground. 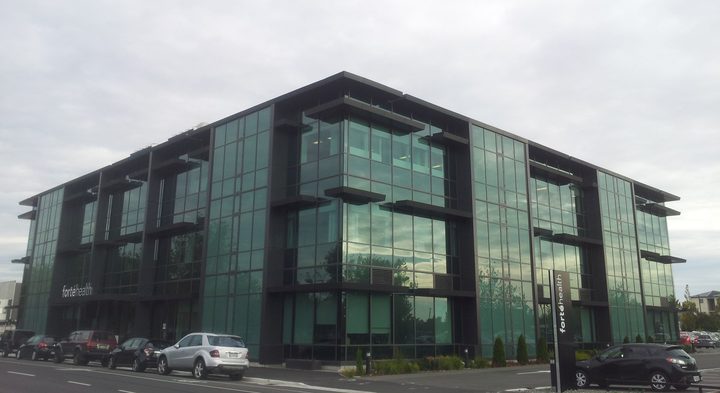 Forté Health specialist hospital in Christchurch has been designed and built as a low damage building that will withstand strong earthquakes. Photo: University of Canterbury

Rocking systems are a technique that Geoff says allow a building to move in a very controlled manner.

“It’s a small amount of gap opening that happens at structural connections.”

In practise this means a steel tendon connecting two building elements such as beams.

It’s all very well to design a building that moves – but the occupants don’t want it to move too much, so designs like rocking systems also include damping devices to help dissipate some of the energy that would otherwise add to the swaying and shaking.

Some of these devices are sacrificial - they are readily accessible and can be easily replaced.

Geoff has been developing and refining another damper called a lead extrusion damper. He uses the analogy of squeezing toothpaste out of a tube to explain extrusion, but says the key is to make the process repeatable.

The key is that the lead is relatively soft – although of course, it’s much stiffer than toothpaste!

Viscous fluid devices are another anti-earthquake system that are being used on modern buildings – think of something like mountain bike or car suspension, where the shock absorbers sit in a thick fluid, which in the case of buildings can be anything from oil to a silicon-based fluid. Geoff says that most of these devices for buildings have been very basic, but engineers are looking at optimising the viscous damper for individual buildings.

So there are many potential ways to create safer buildings that will ride out an earthquake and remain fit for use – and Geoff says many of these will be visible in new buildings around Christchurch, especially those on Cambridge Terrace.

“You go in the elevator lobby and the entire rocking frame is visible as are all the dissipative elements. And I think that’s probably due to our recent experience – that the public feel safer seeing the obvious signs of seismic bracing in a building.”

Find out more about earthquake engineering

Alison Ballance meets University of Canterbury earthquake engineer Stefan Pampanin and finds out about the shake table that is used to test new designs.

And hear how and why earthquakes happen in this look at new findings from the 2016 Kaikoura earthquake.