The 1769 Garden is a botanical commemoration of the first encounters between local Tairāwhiti Māori and the crew aboard Captain Cook’s ship the Endeavour. 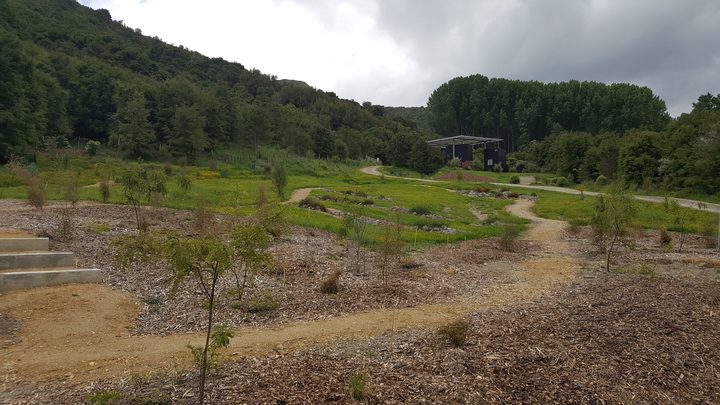 The 1769 Garden is only two years old, and it will mature and develop as more plants are added and existing plants reach full size. The Welcome Shelter sits at the top of the garden. Photo: RNZ / Alison Ballance 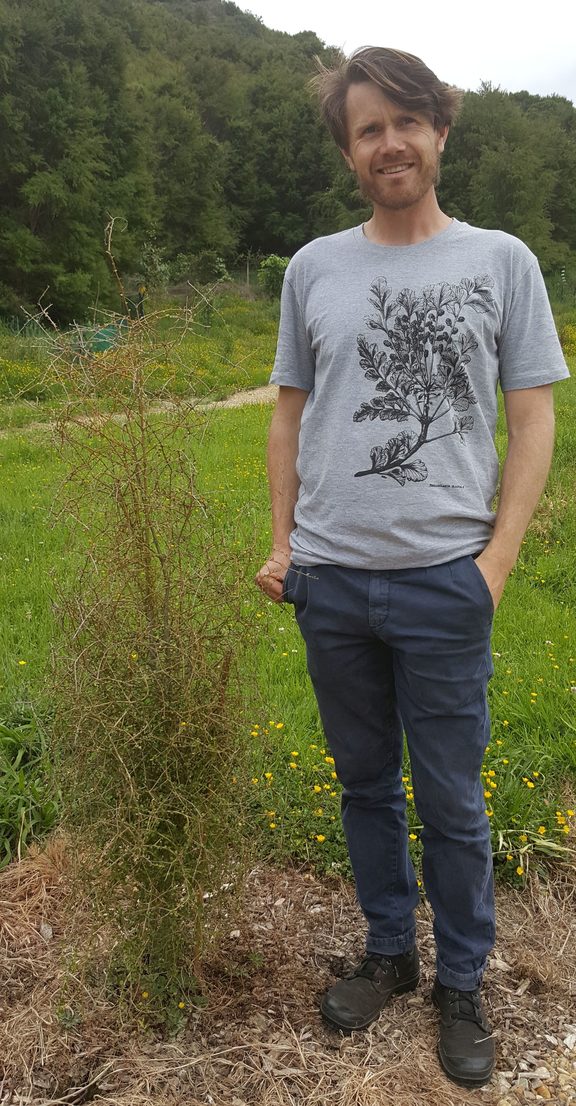 The designer of the 1769 Garden, Philip Smith, next to a heart-leaved kohuhu that he says will grow into a shadowy column. Photo: RNZ / Alison Ballance

The Endeavour made landfall at Gisborne, Anaura Bay and Tolaga Bay in late 1769, and when they came ashore ship botanists Joseph Banks and Daniel Solander collected the first scientific specimens of New Zealand plants.

The 1769 Garden has been created near Gisborne on land owned by historian and Captain Cook expert Dame Anne Salmond. It will be used as part of the 250th celebrations of the first encounters between Māori and Pakeha, in 2019.

Landscape architect Philip Smith says the 1769 Garden has been designed to give a series of impressions: for example, in 1769 the Europeans were greeted by a mass of yellow flowering kowhai, so the first plants that garden visitors encounter are kowhai.

Philip points out that Banks and Solander saw New Zealand native plants as exotic, so he has tried to create a sense of this in the plantings. As they grow larger, Philip says the heart-leaved kohuhu or Pittosporum obcordatum, which has tiny leaves hidden in a tangle of twigs, will create shadowy columns that he expects most people will find surprising.

Philip says the gentle sloping garden site is already wonderful in its own right, and to complement it he has added several some strong sculptural design elements. Long barrows of stone, planted with sprawling Muehlenbeckia, are reminiscent of early Māori garden walls, while a series of rock mounds arranged in a quincunx pattern like the number five on a die, reflect the strict geometry of Māori gardens. 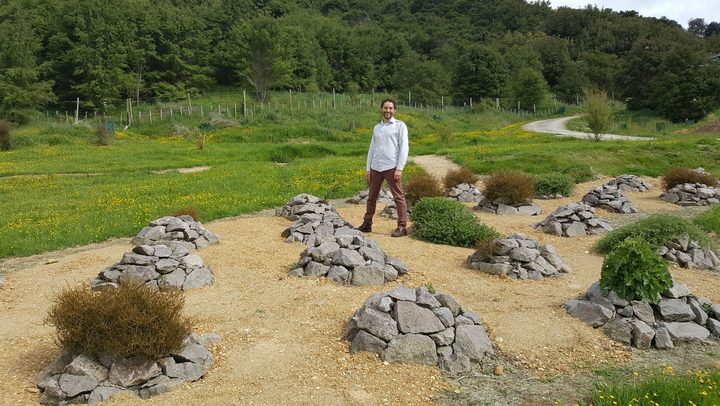 Malcolm Rutherford, curator of the 1769 Garden, stands amongst rock mounds arranged in a quincunx layout. Each mound is home to a rare or unusual plant, including short-lived herbs. Photo: RNZ / Alison Ballance 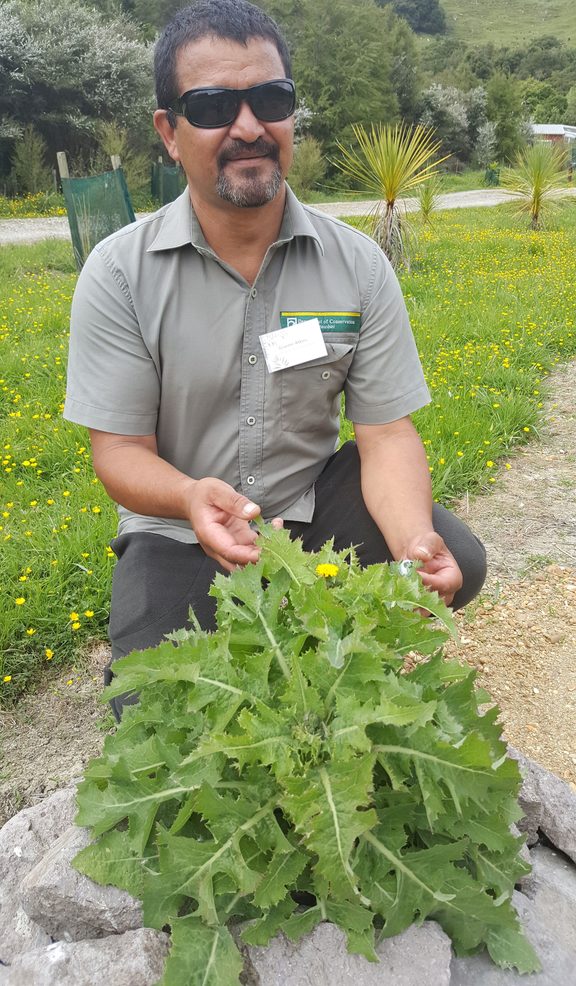 East Coast DOC botanist Graeme Atkins has always been passionate about plants, and he has a knack for finding rare and unusual plants.

He has been pivotal in choosing and sourcing local plants for the garden. The plantings include short-lived herbs that don’t often feature in botanical gardens, but which were among the first plants collected by Banks and Solander in 1769.

The native puha, Sonchus kirkii, was a favourite food for Māori before Europeans arrived.

These days, the accidentally introduced European sow thistle is more commonly eaten, as Graeme says most people reckon it’s sweeter. But he has lots of the native puha planted in his East Coast garden, and much prefers it.

“This is the puha that is from this country, and I might be a bit one-eyed but I favour it.”

Graeme says that the native geranium Geranium solanderi would have once been “really common – as common as grass.” These days it’s rare, due to competition from introduced plants and being eaten by rabbit and hares, and is often found on cliffs, out of reach of introduced herbivores.

Banks and Solander collected it on their first day ashore in 1769. 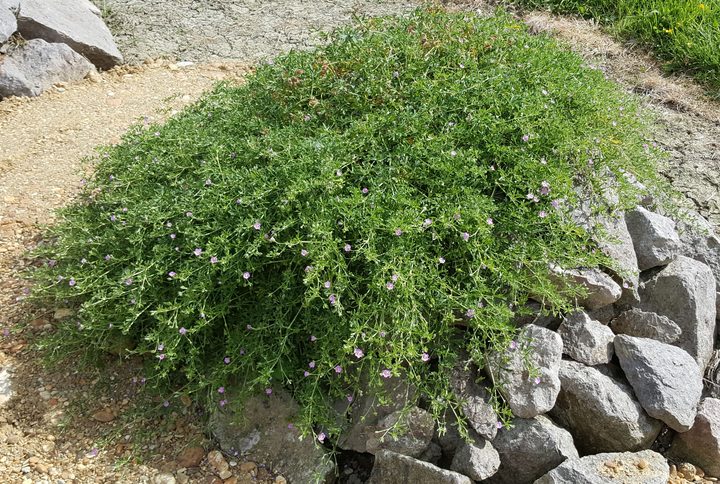 The native geranium, Geranium solanderi, is named after the Swedish botanist Daniel Solander who was on board the Endeavour when it visited New Zealand in 1769. Photo: RNZ / Alison Ballance 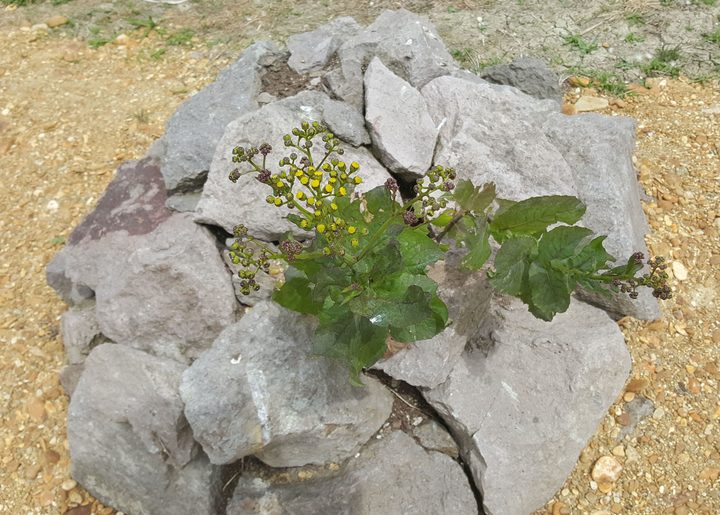 Senecio banksii is a member of the daisy family, and is named after Joseph Banks. 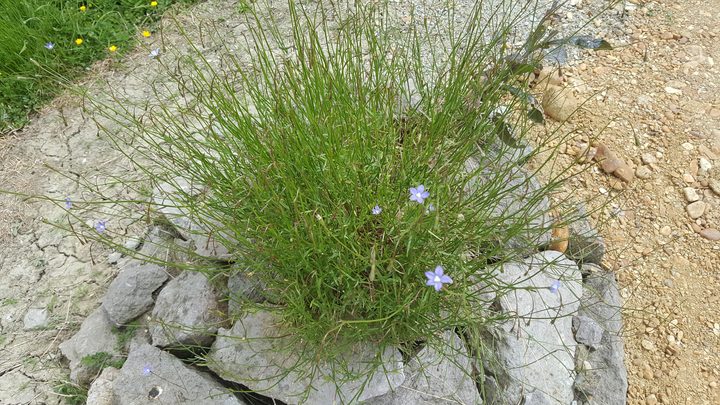 The 1769 Garden is protected by a QEII Trust conservation covenant - you can hear more about the Trust, including two further covenants on the Salmond's land in a sister story on Our Changing World.