SOFIA - a flying telescope with a unique view of space

SOFIA is the NASA Stratospheric Observatory for Infrared Astronomy, and it is a 2.5m telescope mounted in the back of a converted Boeing 747SP. 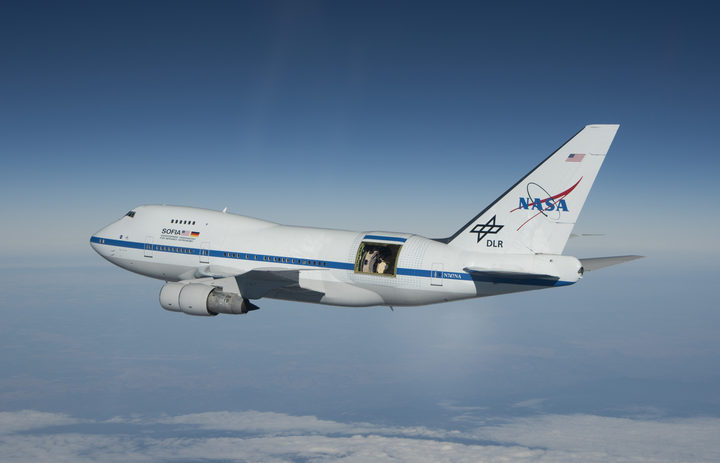 On regular night flights scientists use the telescope, along with specialised instruments, to observe the birth and death of stars, and objects such as the supermassive black hole at the centre of our galaxy. 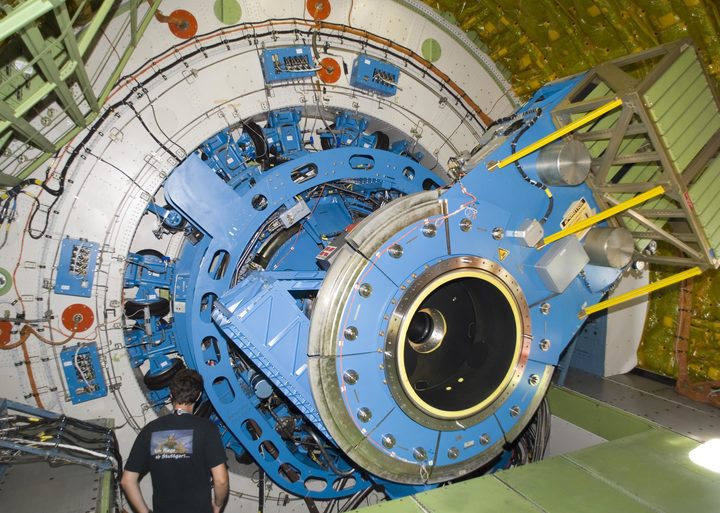 The back end of the 2.5-metre SOFIA telescope - different instruments are clipped onto the yellow circle. Photo: NASA / Tony Landis

Astronomers have a good general understanding of how stars form. Evidence gathered over decades shows that clouds of gas and dust in space contract because of their own gravity. Individual clumps condense inside those collapsing clouds and become stars. Nevertheless, despite decades of careful study, there are many details of the star formation process that are not well understood.

By flying in the stratosphere, above any water vapour, SOFIA allows us to observe the universe at wave lengths that aren’t possible from the ground, and to answer some of these questions about star formation. 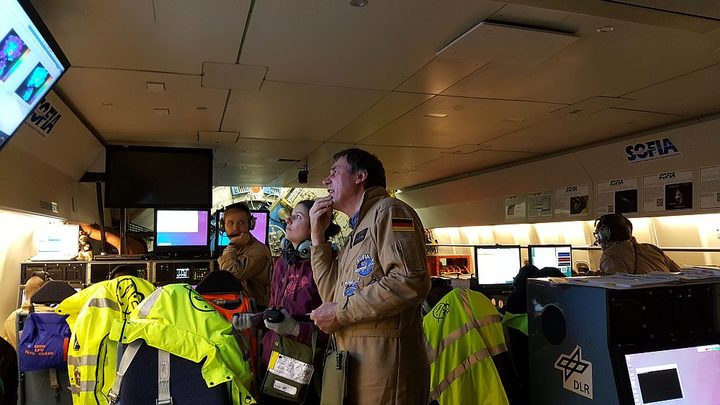 Alfred Krabbe and Melanie Chevans watch data coming in from FIFI-LS, as it focuses on the supermassive black hole in the centre of our galaxy. Photo: RNZ / Alison Ballance

SOFIA is a joint NASA and German Aerospace Center (DLR) mission. It is usually based in California but has worked out of Christchurch for the past four winters.

The regular winter deployment to New Zealand allows astronomers to view objects such as the Magellanic Clouds that are only visible in the southern hemisphere.

RNZ's Alison Ballance joined SOFIA flight 422, which took off from Christchurch Airport just after 6.20pm on 26 July. During its 10-hour flight, the plane reached 43,000 feet in the stratosphere and flew more than 8000km.

Interior of SOFIA flight 422, with scientists and technicians observing data coming in from the telescope, the back end of which is just visible. Photo: RNZ / Alison Ballance

The telescope is permanently mounted in the plane, and different instruments are swapped in and out as required.

The instrument being used on Flight 422 was the FIFI-LS, which stands for Field Imaging Far-Infrared Line Spectrometer. It was developed by Albrecht Poglitsch, from the Max Planck Institute and Alfred Krabbe from the University of Stuttgart and Director of the German SOFIA Institute.

FIFI-LS records in the far infrared, which is the part of the infrared spectrum furthest from visible light. 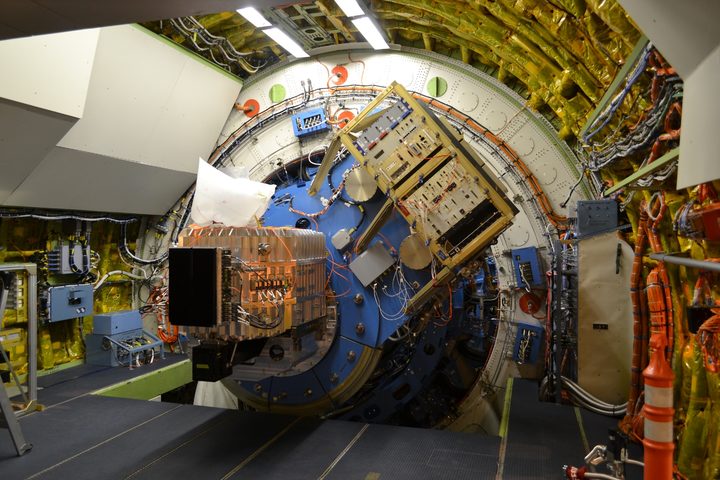 The FIFI-LS instrument (the rectangular box) clipped onto the blue back of the telescope. The name stands for Field Imaging Far Infrared Line Spectrometer. Photo: NASA / SOFIA / USRA / Greg Perryman

The telescope can only observe objects from the left side of the plane, so each flight plan is carefully calibrated to ensure that the telescope is pointing towards the right part of the sky at the right time. The two pilots are responsible for making sure the plane sticks exactly to the flight path, and reaches the predetermined turn-around points. 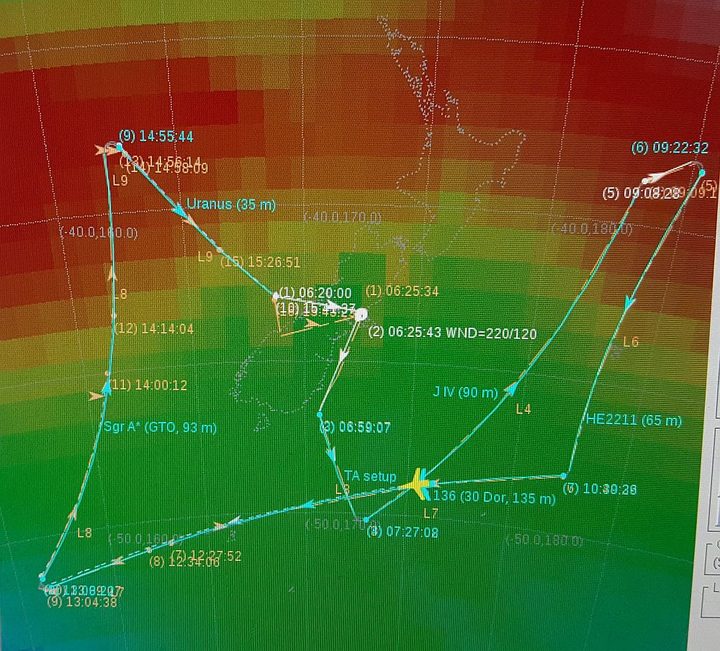 During Flight 422, there were five observing legs. Once the telescope had equilibrated with the very cold air outside, it focused on Callisto, the fourth moon of Jupiter for 90 minutes. The purpose of this was to calibrate the FIFI-LS instrument, which had just been reinstalled in the plane.

The first real scientific leg of the flight looked at He2211, a star-forming region that is millions of light year away. Scientists are gradually mapping the area to find out if it is producing stars slowly or quickly. 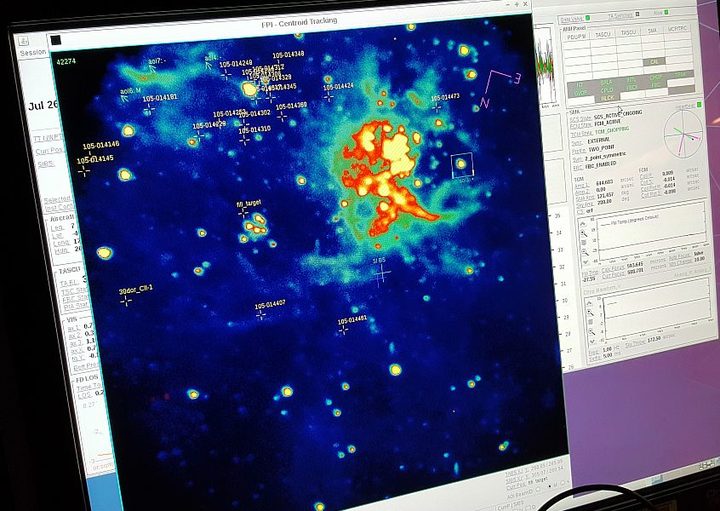 A false colour image of the galaxy that the telescope is looking at. Photo: RNZ / Alison Ballance

The next target was 30-Doradus, also known as the tarantula nebula, in the large Magellanic Cloud. The two Magellanic clouds are the closest galaxies to our own, and are the faint smudgy ‘clouds’ that you see in the Milky Way on a clear night.

Star formation in the Magellanic Clouds is especially interesting to astronomers for comparison with star formation in our galaxy because the material in the clouds has lower metal content than in the Milky Way. The clouds are chemically more like the primordial material from which the first generation of stars formed after the Big Bang. Astronomers want to understand the extent to which that composition difference causes star formation to operate differently in the clouds versus within our galaxy.

The fourth mission for the night was to look at Saggitarius A*, which is the supermassive black hole at the centre of our galaxy, and the fifth and final science leg observed one of the rings around the planet Uranus.

The bonus observation for the night was an aurora, visible at the southern-most part of the flight path, at around 51

Aurora, seen from the cockpit window at about 51 degrees south. Photo: Dr Karl

ABC science presenter Dr Karl Kruszelnicki also took part in SOFIA Flight 422 and he was particularly fascinated with the technology that enables the telescope to work as a stable viewing platform from a plane.