During the biggest event on New Zealand’s annual science calendar, around 1600 scientists mingled with skiers and tourists on the streets of Queenstown last week.

The occasion was Queenstown Research Week, which sees 3 big conferences and 10 smaller satellite conferences attracting experts in the areas of genetics and molecular biology from around the world.

The Queenstown Molecular Biology meeting is one of the big umbrella conferences, and this year it focused on several themes, including the microbiome – all the microbes that live on and around us – as well as CRISPR-Cas. This is a bacterial immune system that we have recently borrowed, and which has enabled an incredible advance in our ability to precisely edit genes.

To get a flavour of the kind of research being talked about at the conferences, Our Changing World caught up with some of the researchers.

Heather Hendrickson is at Massey University and studies the evolution of bacteria. She describes the viruses that infect bacteria as “microbial ninjas.”

As part of her research she is investigating cell shape in bacteria. She says they come in a variety of shapes, but she is particularly interested in the question of why rod-shaped bacteria have repeatedly evolved to become spherical. Spherical bacteria tend to be large, and Heather says “we think the benefit of being big might be that it’s really hard for predators to eat you.” 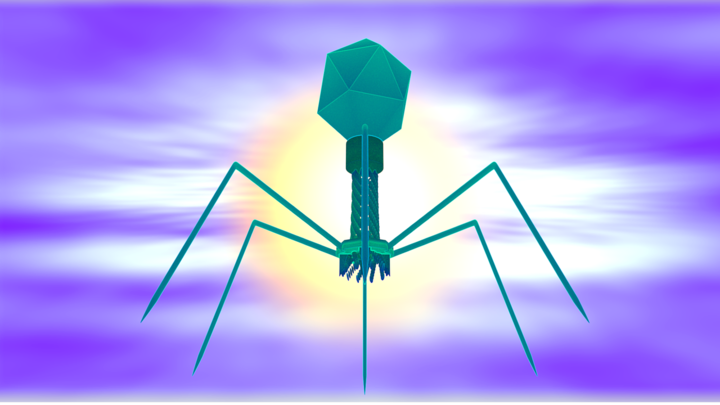 A bacteriophage is a virus that targets bacteria. Photo: Public domain

Heather also studies bacteriophages - viruses that specialise in infecting bacteria. Heather says that they are by far the most abundant microbe on the planet, estimated to number 1031 – more than all the stars in the universe. But she adds they aren’t very well known – only 1000-or-so different phages have been described.

“They’re these simple protein pods, basically, and they have these little bits of genetic material inside. When they bump up against a bacterial cell they’re able to inject their genetic material, take over the cell and create hundreds of copies of themselves … in as little as 20 minutes.”

The new bacteriophages then rupture the bacteria and are released to begin infecting new bacteria..

The genetics of very rare diseases

Geneticist Louise Bicknell is a Rutherford Discovery Fellow at the University of Otago. She studies the genetics of very rare diseases that occur at the rate of about one per million people.

She is interested in how a single change in our DNA can have important consequences for our development.

One such disease is Meier-Gorlin syndrome (MGS), where disruption of the earliest stages of DNA replication leads to a specific syndrome of short stature, small ears, and absent kneecaps.

It’s a recessive disorder, so a person needs to inherit a recessive gene from each parent.

Louise says that there are just four New Zealanders with this syndrome. Her team has identified most of the genes involved in this syndrome and “they all seem to be really important in replicating the very first proteins that bind to our DNA to start the process of development off.”

She is intrigued by “why something so essential causes such different impacts on tissues in our body.”

Louise uses microbial tools such as the CRISPR-Cas9 gene editing system as part of her research.

The gene editing system CRISPR-Cas9 burst onto the science scene less than five years ago, and has revolutionised genetic science.

It’s often described as molecular scissors, and can be used to find and cut out a specific short DNA sequence with a gene.

We hear a lot about its potential to cure genetic diseases. Within the last few weeks scientists report they successfully used the CRISPR-CAs 9 system in human embryos to correct a gene mutation linked to inherited heart disease.

But while it’s early days in our use of the CRISPR system, it turns out that bacteria have been using it for millions – maybe even billions – of years. 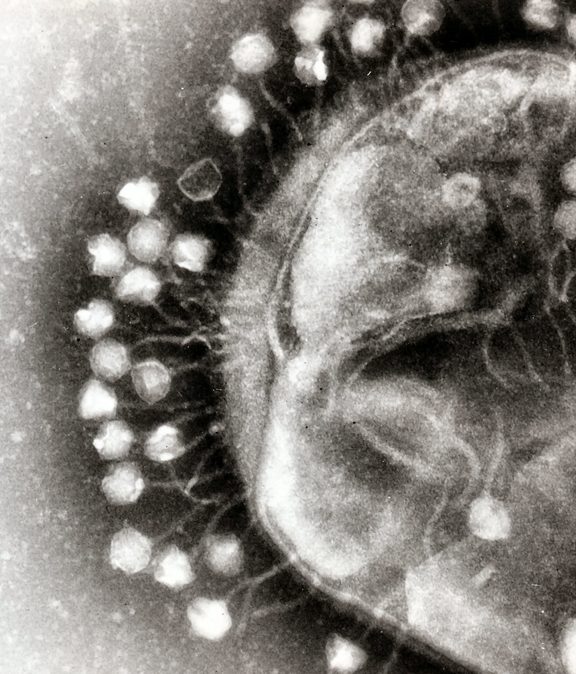 Many bacteriophages that have attached themselves to the outer cell wall of a bacteria. This image was taken on an electron microoscope. Photo: CC BY-SA 3.0 Graham Beards

CRISPR-Cas is like an adaptive immune system, but specifically for single-celled organisms such as bacteria and archaea to fight bacteriophages.

Archaea are a very ancient group of prokaryotes. You might find them in extreme environments such as hot thermal pools or inside the rumen of animals such as cows, where they help break down grass.

“CRISPR-Cas essentially allows bacteria to form genetic memories of prior virus infections,” says University of Otago post-doctoral fellow Simon Jackson - “and they can use this memory to mount an immune defence response.”

Peter Fineran from the University of Otago explains that CRISPR stands for Clustered Regularly Interspaced Short Palindromic Repeat, referring to memory banks within the bacterial chromosome which records a history of past viral encounters.

Cas stands for the CRISPR associated genes which encode the proteins “or machinery” which makes this immune system actually work.

Here’s another - less scientific - way of thinking about the process. If the virus is a home invader, CRISPR is like the criminal’s mugshot, and Cas is the precision weapon that uses the mugshot to recognise its target, and then slices the virus in half to stop it replicating.

Peter says there are at least six different classes of CRISPR-Cas system, and about 20 different sub-types. CRISPR-Cas9 which we have borrowed as a molecular tool is one of the simplest, and as we learn more we may be able to adapt other systems as well.

The CRISPR-Cas system is always learning how to recognise and respond to invading viruses or bacteriophages. It is capable of recognising a virus even if it has mutated - which viruses are very good at doing. It is also able to refresh its memory banks to get rid of old memories that it doesn’t need.

Virus versus bacteria – the arms race

Immunity is an ongoing arm’s race, and bacteria certainly don’t have it all their own way.

As well as constantly mutating to try and outwit the CRISPR-Cas memories, viruses also have anti-CRISPR genes that produce proteins that can block the CRISPR-Cas system. And scientists say that this might be useful as a refinement in our use of CRISPR-Cas9.