Did New Zealand’s largest fault rupture during the Kaikōura earthquake? It’s a controversial question amongst geologists at the moment as they unravel exactly what happened. And while many believe it did move, others aren’t convinced. 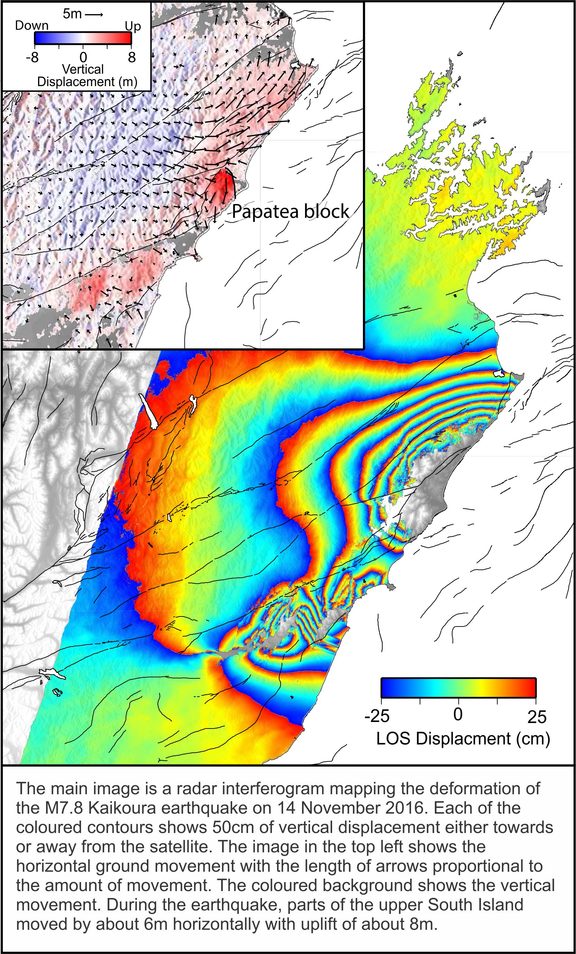 Radar interferogram showing how much the ground was moving during the Kaikōura earthquake. Photo: GNS Science

The complex magnitude 7.8 earthquake shook New Zealand for nearly two minutes just after midnight on the 14th of November 2016. It generated the strongest ground acceleration ever recorded in New Zealand, a measurement of almost 3G.

Six months after the quake, GNS Science geophysicist Dr Laura Wallace says that what is already clear is that New Zealand’s largest fault, the Hikurangi subduction zone (which is the plate boundary where the Pacific Plate pushes down under the Australian Plate) did move in its southern section which passes below the upper South Island - but only after the earthquake.

This slow ‘afterslip’ event began immediately after the initial earthquake and lasted for many weeks. Twenty five kilometres below the surface, the plate boundary slowly slipped up to half a metre, releasing energy equivalent to a magnitude 7.3 earthquake.

“This has been also very surprising,” says Dr Wallace. And, importantly, she thinks it “suggests the likelihood that the earthquake may have also involved rupture on the subduction zone.” 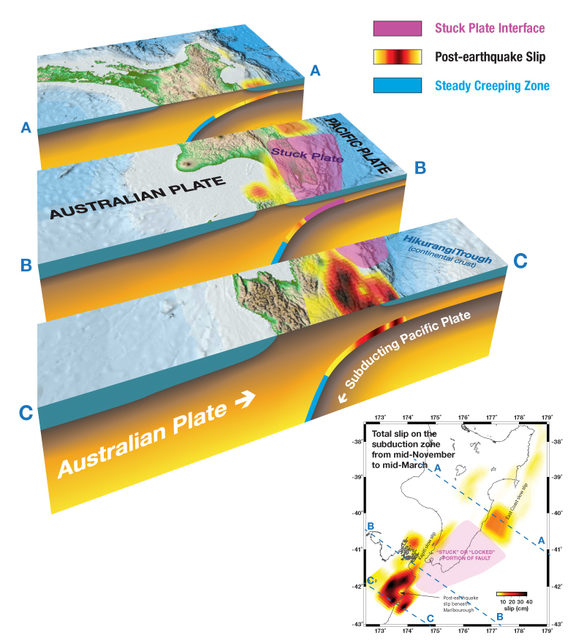 Location of slow-slip earthquakes (brown to yellow patches) on the Hikurangi subduction zone - the boundary between the Australian and Pacific Plates - following the Kaikoura quake. Photo: GNS Science / GeoNet

When the earth moves slowly

The Kaikōura earthquake triggered two other slow-slip events on the same subduction zone. One, between Gisborne and Hawke’s Bay, lasted two weeks and released energy equivalent to a magnitude 7.1 earthquake.

A slow-slip event occurring beneath the Kapiti Coast and Marlborough Sounds is still happening, and has already equalled a magnitude 7.0 earthquake.

But not all of the plate boundary has moved. The section under Cook Strait is locked, even though there was movement on either side.

Dr Wallace says the plate boundary beneath the southern North Island is “building up stress that will probably be released in a future earthquake one day.”

That future earthquake will almost certainly be very large. Faults in the subduction zone are always big and have been responsible for causing some of the world’s most destructive earthquakes, such as the 2011 Tohoku earthquake in Japan.

Later this year Dr Wallace will lead an international research collaboration that will begin to drill into the Hikurangi subduction zone off Gisborne, in an effort to learn more about the fault and how it behaves.

Research to date has revealed that at least 21 faults ruptured across 170 kilometres of the northeastern South Island during the Kaikōura earthquake, and geologists think they may find even more faults as they continue to collect and analyse data.

GNS INSAR scientist Dr Tim Hamling says between 12 and 14 of those faults played a major role.

He says that one of the most significant finds has been that the large amount of energy released by the initial rupture was able to ‘jump’ large distances between faults.

“When you look at the fault network that’s ruptured, what you find is that some of these structures are separated by 20 kilometres or more.”

Dr Hamling that says that traditionally it was believed a gap of just 5 kilometres between faults would stop the earthquake.

Satellite and GPS data have helped reveal that some of this jumping occurred across hidden ‘blind faults’ that are deep underground and not visible to geologists at the surface. 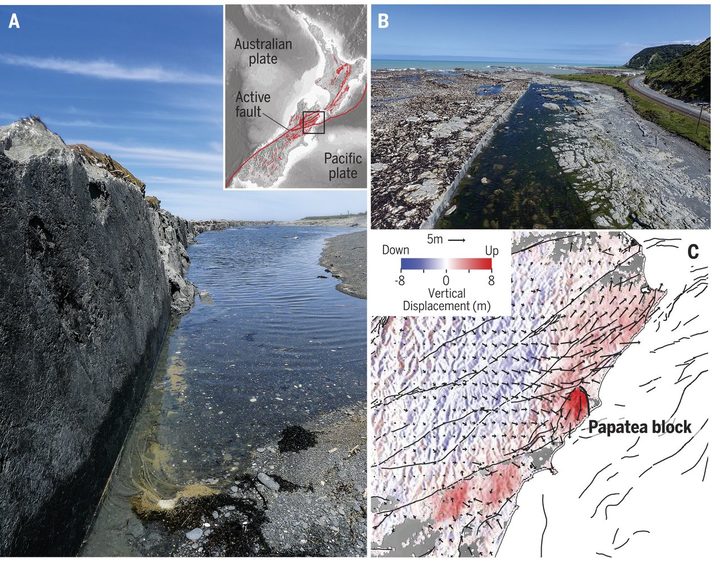 This illustration comes from a recent paper in the journal Science. It shows observed ground deformation from the 2016 Kaikōura earthquake. Photos A and B show coastal uplift of 2 to 3 m associated with the Papatea block [labeled in (C)]. Red lines denote the location of known active faults. The black box indicates the Marlborough fault system. In C, the arrows represent the horizontal displacements, and the colored background shows vertical displacements. Photo: GNS Science

Immediately after the quake state highway one north and south of Kaikōura was blocked by large landslides. GNS engineering geologists Dr Sally Dellow and Dr Chris Massey were involved straightaway in assessing public safety and finding safe routes into the township.

Dr Massey says that “the main area affected [by landslides] is 3600 kilometres square, and the wider area is 10,0000 square kilometres – so it’s a huge area.”

Drs Dellow and Massey colleagues have so far mapped more than 6000 landslides, by comparing satellite images from before and after the event, and they say there are at least 4000 more still to map.

The Seaview Landslide, on the Papatea Fault near the Clarence River mouth, was the largest landslide triggered by the Kaikōura earthquake. Photo: GNS / Geonet 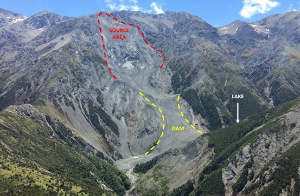 Most of the mapped landslides occurred near faults. Dr Dellow says that this is unusual as “the convention has always been that the landslides would be concentric around the epicentre,” like ripples moving out from a stone thrown into a pond.

Nearly 200 debris dams, where lakes formed behind the slips, have been counted. Heavy rain has already caused some of the more worrying dams to breach, so they are no longer a concern, but Dr Massey says they don’t know what is happening with about 195 of the dams in more remote areas.

The road to the south of Kaikōura is now open, although heavy rainfall events such as Cyclone Debbie have turned existing landslides into wet debris slides. These can move long distances and have occasionally re-blocked the road.

Geologists recently laid out some ideas as to what happened as the earthquake unfolded.

If you carefully read the next bit of this story out loud, it will take about the same time as the earthquake itself.

0 seconds - ground zero is the epicentre in the Humps Fault Zone near Waiau. This initial high energy rupture is shallow, just 15 kilometres below the surface.

First the Hump and then the Hundalee Fault rupture in a north-easterly direction. Peak ground acceleration at one GPS station is 3G, the highest ever recorded in New Zealand.

20 seconds - the maximum energy release jumps to another fault lying about 25 kilometres further north. Faults here also began rupturing to the north-east, in part two of what will ultimately be a complex four-stage process that finishes in Cook Strait.

40 seconds - shaking continues in the central area, as energy generated by the quake spreads out across a number of faults, both on land and off the coast. We don’t know the exact details here, but there’s movement in many directions, with some faults sliding horizontally and others thrusting up vertically.

70 seconds – there are several large burst of energy release. One hits the township of Kaikōura uplifting the peninsula by a metre, while the other causes big northern faults to fail.

Thousands of massive rock avalanches are falling off the mountains. Underwater avalanches sweep down the Kaikōura canyon and run for hundreds of kilometres into the Hikurangi Channel.

The rupture in the Kekerengu Fault runs for 90 kilometres and continues for another 30 kilometres under Cook Strait along the Needles fault.

At the surface, the sides of the Kekerengu fault slide past each other by up to 12 metres. Deeper down in the fault the movement is closer to 25 metres. Cape Campbell at the top of the South Island moves several metres closer to the North Island.

The ground acceleration of 1G is equivalent to being on a rollercoaster. 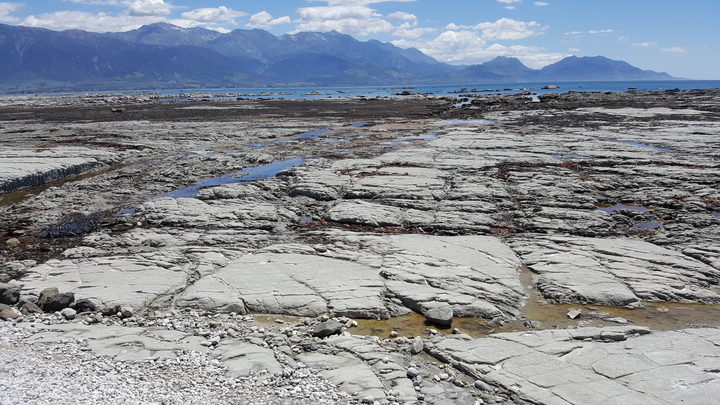 The Kaikōura peninsula was pushed up by nearly a metre. Photo: RNZ / Alison Ballance

There have been more than 16,000 aftershocks – and counting – in the six months since the Kaikōura earthquake.

There have also been significant changes to marine life along 110 kilometres of Kaikōura coastline, which was uplifted by between one to five metres.

The earthquake generated a tsunami of nearly 7 metres in places. The impact of the tsunami was less than expected because of the coastal uplift and low tide at the time.

The latest research is far from the last word on what happened during the Kaikōura earthquake.

Experts continue to collect and analyse data for what has been described as ‘one of the most complex earthquakes ever recorded with modern instrumental techniques.’ And what we learn will help us understand the potential effects of future large earthquakes and how to better plan ways of dealing with them.