Uplifted - marine life on the Kaikōura coast after the quake

At low tide the rocky shore platform that skirts much of the Kaikōura Peninsula lies baking in the midday sun. The colour palette, once green, brown and pink, is now black and white. Dead seaweed crackles as you walk on it. 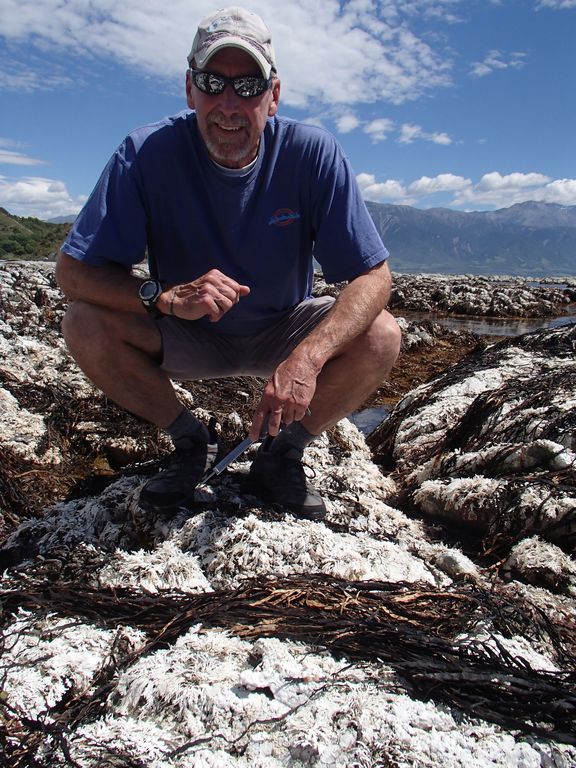 The reef is twice the size it once was, and it’s now a long walk to reach the water. It’s a walk you can do and still keep your feet dry – and it didn’t used to be that way.

This was once the richest intertidal rocky reef in New Zealand, says University of Canterbury Distinguished Professor David Schiel. “You used to be able to find about 20 species of marine algae and invertebrates, sheltering under the low canopy of Neptune’s necklace. Now it’s all dead, and you’d be lucky to find four or five.”

Thousands of limpets once grazed the slightly higher, barer slopes. They’re all gone as well.

The cause of this remarkable change was the magnitude 7.8 Kaikōura earthquake, that struck the northeastern coast of the South Island in the early hours of 14 November. The original event, which involved at least 9 faults, has been followed by more than 9000 aftershocks.

The earthquake was ground-breaking in many ways, but one of the most striking was the coastal uplift. One hundred and twenty kilometres of coastline was shunted up out of the ocean by between one to six metres.

There were dramatic reports of thousands of stranded paua rescued and returned to the sea, south of Kaikōura.

The Kaikōura Peninsula was uplifted by a metre, and while the visual effects there are more subtle, they are just as ecologically profound. 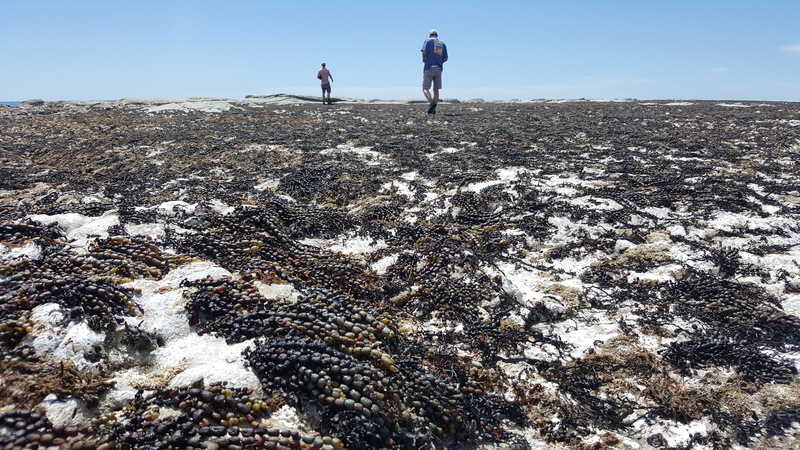 What was once hues of brown and green is now stark black and white. Photo Alison Ballance 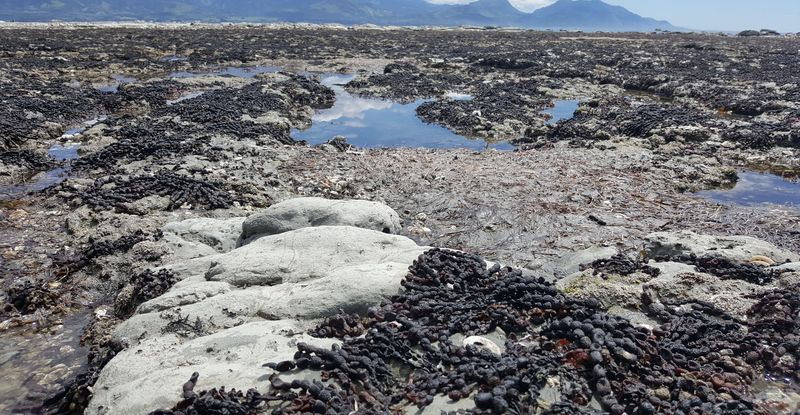 Kaikōura Peninsula was uplifted by a metre when the 7.8M earthquake struck on 14 November. A month later the Neptune's necklace and seagrass on the intertidal flats are all dead. Photo Alison Ballance 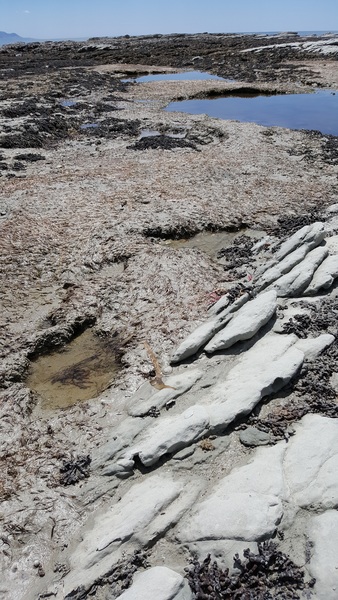 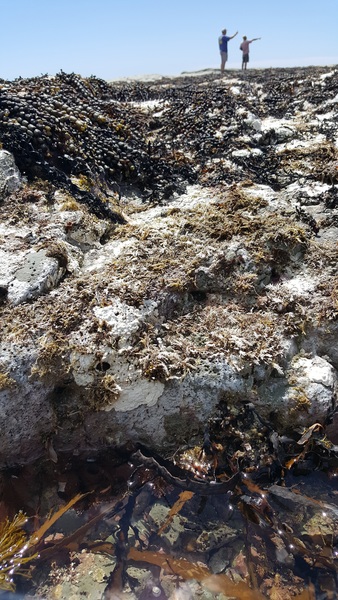 David Schiel has been studying the intertidal life of Wairepo Flats for 25 years, and is stunned by the coastal uplift. A few seaweeds are surviving in water in tidal cracks. Photo Alison Ballance 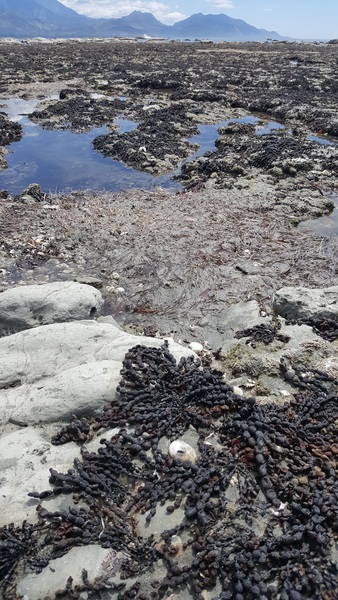 Uplifted shoreline on Kaikōura Peninsula.The reef platform is now more than a hundred metres wider than it used to be. Photo Alison Ballance

Panoramic view of uplifted coastline on the Kaikōura Peninsula. 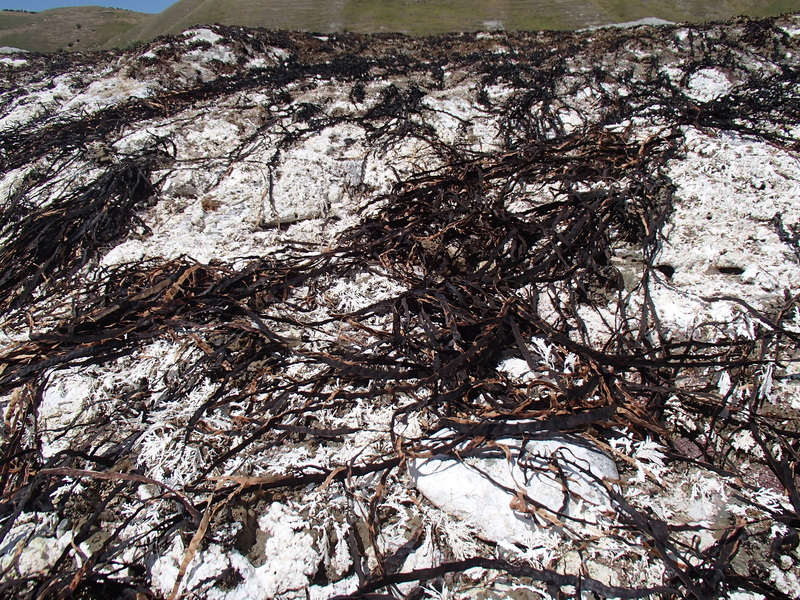 Dead flapjack or seawrack (Carpophyllum maschalocarpum), at what used to be the lower edge of the intertidal zone. Photo Alison Ballance 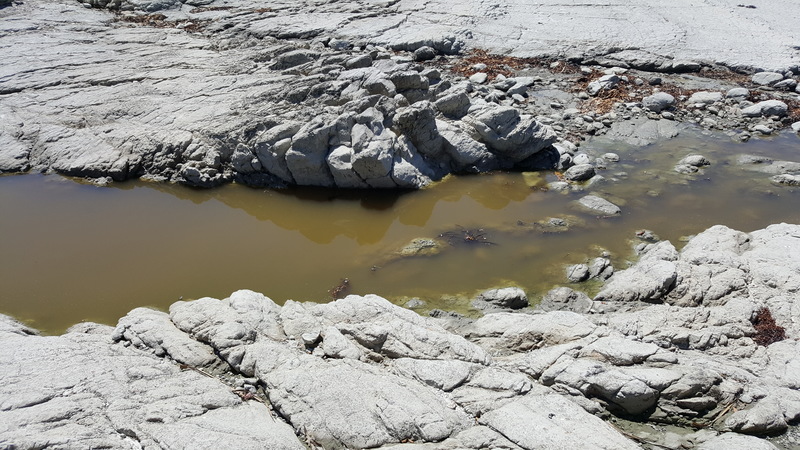 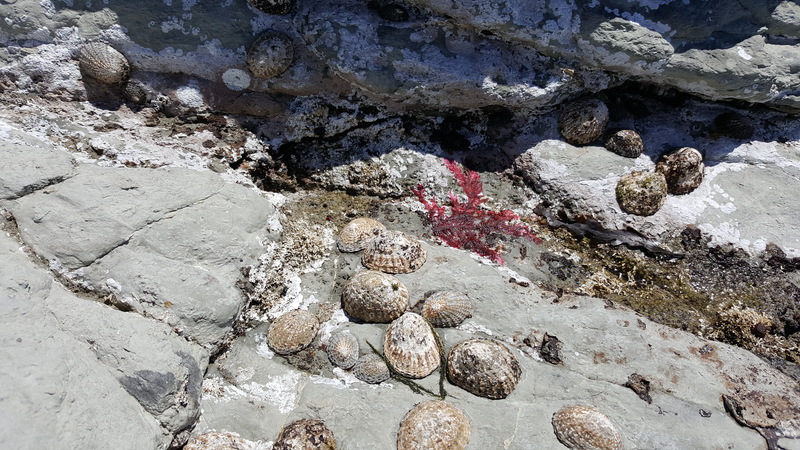 Limpets living in what used to be the low intertidal are surviving, but tens of thousands of limpets higher up the shore have died. Photo Alison Ballance 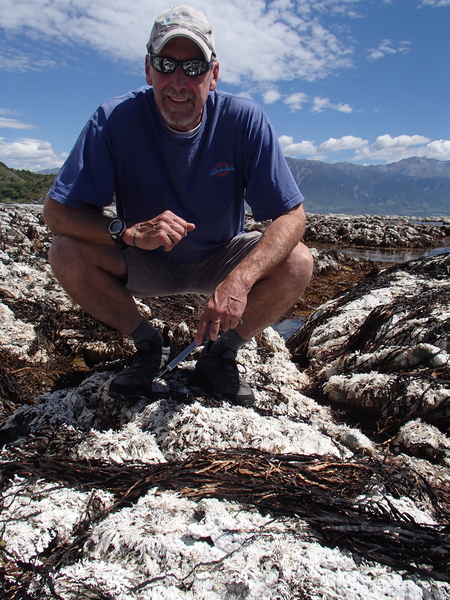 David Schiel surveys dead seaweed on a part of the shore he is intimately familiar with. Photo Alison Ballance 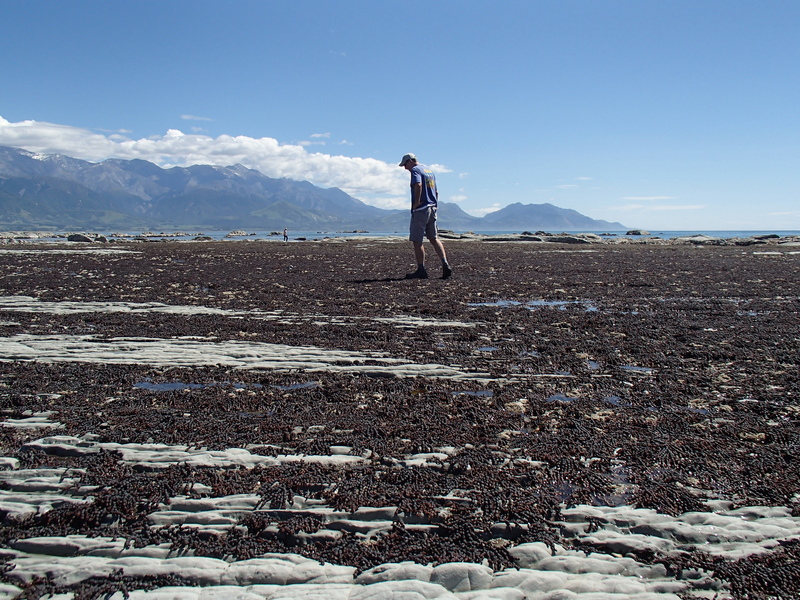 David Schiel walks through an area that was once the richest intertidal rock platform in New Zealand. Photo Alison Ballance 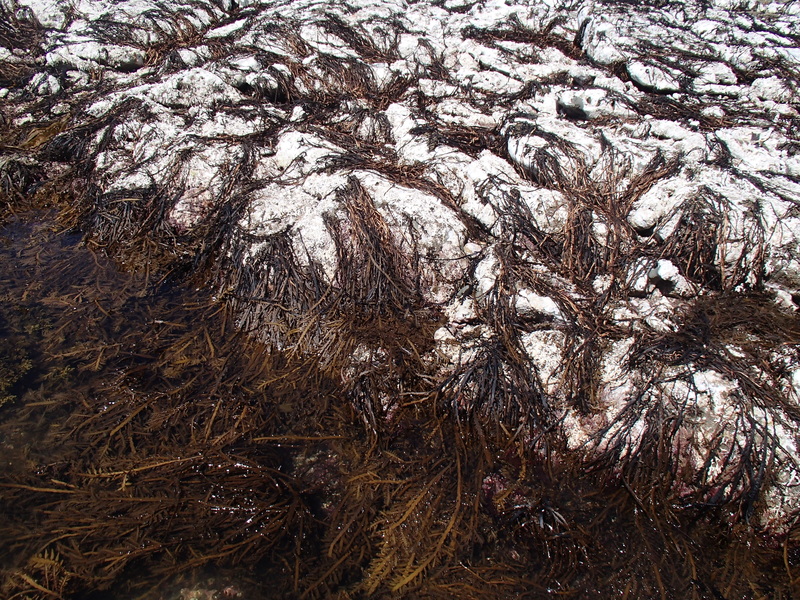 This area of the reef was permanent subtidal, but most of the flapjack is high and dry. Only the seaweed hanging in the tidal channel is surviving. Photo Alison Ballance 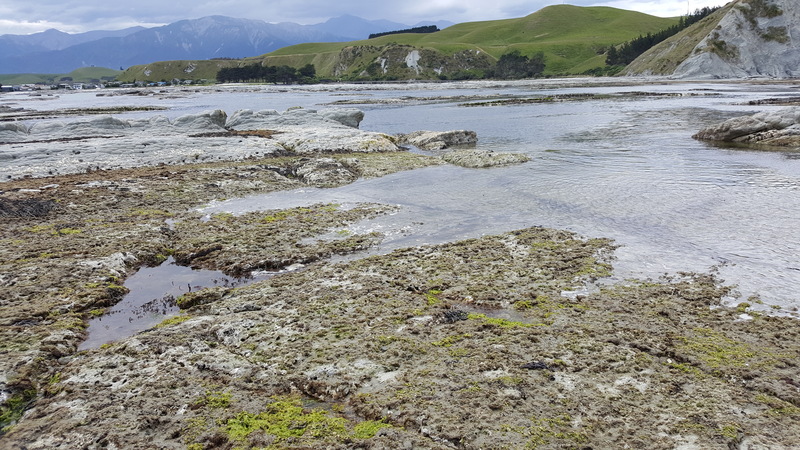 Uplift on the south side of the Kaikōura Peninsula. Photo Alison Ballance 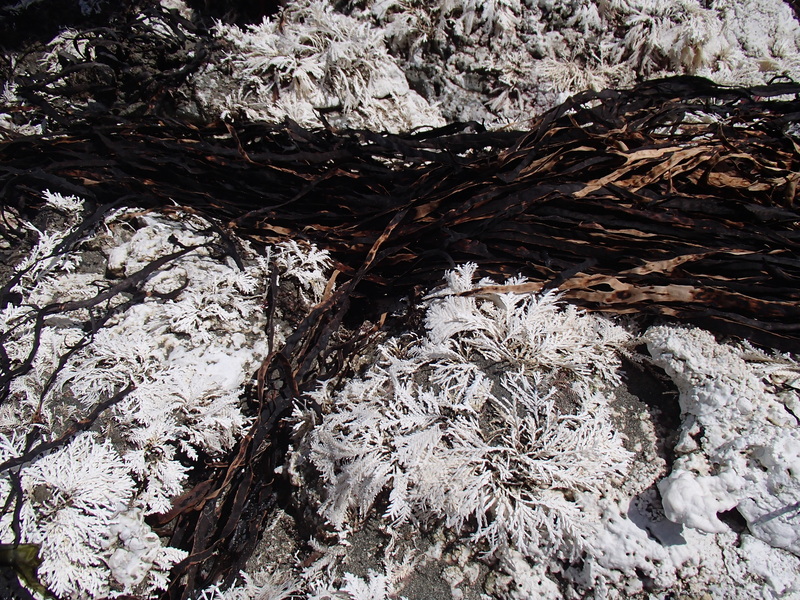 Once flexible and brown, the dead seawrack is now black and stiffened, while the formerly pink coralline algaes have bleached white. Photo Alison Ballance 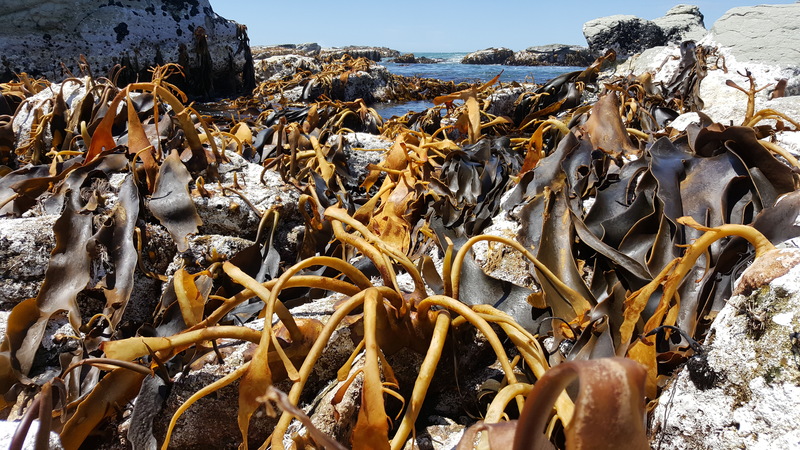 This bull kelp was once permanently submerged and has dessicated in the sun. Photo Alison Ballance 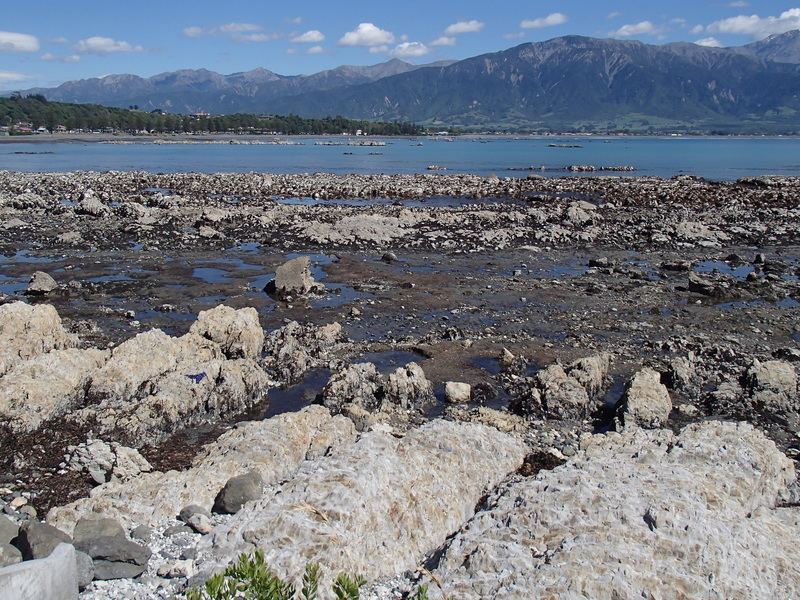 View across the newly uplifted shore platform from the Canterbury University marine laboratory towards the township of Kaikoura. Photo Alison Ballance 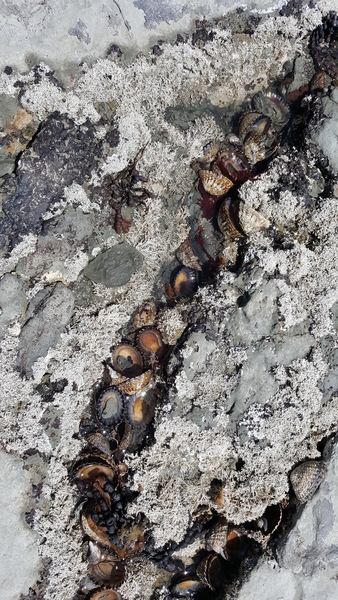 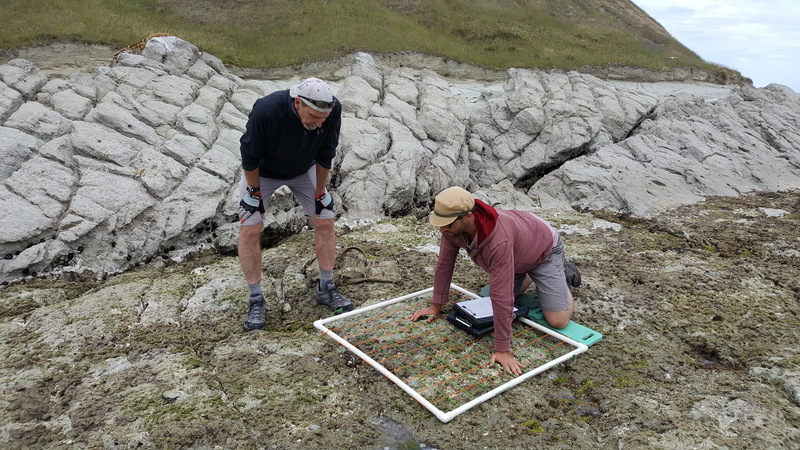 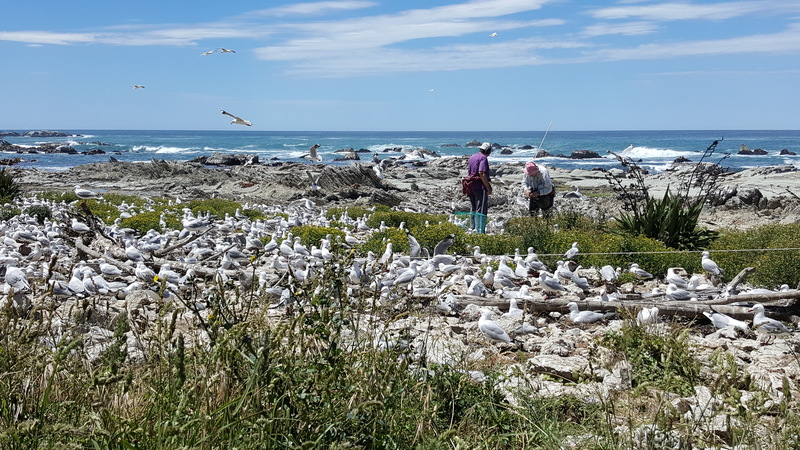 Jim and Deborah Mills working in the red-billed gull colony which has benefited from all the dead limpets and marine molluscs. Photo Alison Ballance 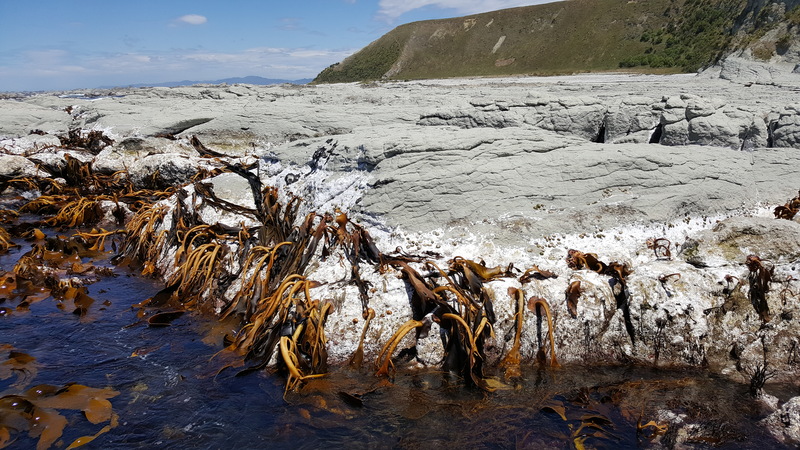 Schiel knows this area intimately – for 25 years he and his students have been studying the seaweeds and invertebrates of the intertidal zone, that bit between high and low tides, in great detail.

They were looking at the impact of low-level incremental change over time – and the last thing they expected was a sudden tipping point, that one moment when everything changed.

Shore life on this wide, flat mudstone platform is determined by exactly how long it is exposed to the sun at low tide. There is a subtle zonation that reflects slight variation in topography, and proximity to tidal cracks along which water can creep.

Neptune’s necklace (Hormosira banksii), with its string of bead appearance, familiar to everyone who has visited any rocky shore in New Zealand, is the hardy canopy species. It can tolerate several hours out of water, and as it flops over in the absence of water it provides shady cover for other more delicate seaweeds that shelter below.

In slight hollows, seagrass gains a foothold, its roots gathering a layer of nourishing sediment.

Lower down the shore, the long serrated blades of the brown algae known as flapjack or seawrack (Carpophyllum maschalocarpum) cover the rocks which remain permanently wet.

But a month ago the rocks were shunted upwards, leaving everything high and dry. Since then things have been slowly dying. Even the Neptune’s necklace has given up the fight and the reef is littered with decomposing strings of black seaweed beads.

Schiel says that after a couple of weeks the stench was awful. Rock pools and the first few metres of sea were a dark toxic soup of tannins and chemicals released by rotting seaweed and dying invertebrates.

Hordes of red-billed gulls stalked the shore, gorging on multitude of dead limpets.

At the tip of the peninsula, near the New Zealand fur seal haul-out which is familiar with both seals and tourists, a metre-wide band of dead bull kelp now marks the previous boundary between the intertidal and the permanently wet subtidal. Once supple and leathery the kelp is drying to sharp brittle paddles.

Near the water, some lucky limpets have survived. But further away from the water piles of limpet shells have washed into the cracks, and at the top of the shore, a new high tide mark has formed.

Schiel says the next big storm will probably wash away much of the dead seaweed, and life will begin to adapt to the new reality.

Where there is rock available, the familiar zonation will shuffle down the shore, closer to the water. Marine life is resilient and it will soon reach a new equilibrium.

But he suspects that much of his favourite study site will become an expanse of bare mudstone. It is too far out of the water now, and plants and animals will find it hard to attach themselves to the flaky surface.

All of this matters because the intertidal zone is rich and productive. It helps feed life in the waters beyond, such as the fish, crayfish and paua.

The Ministry of Primary Industries is confident enough in the resilience of the local ecosystem to re-open the crayfish fishery this week.

Red-billed gull researchers Jim and Deborah Mills say the damage has a silver lining. They have been studying the gulls here for 54 years, and they know how lucky the gulls were that the small tsunami that followed the earthquake struck at dead low tide, on a shore that was suddenly a metre higher than it had been.

Surrounded by a squawking melee of birds in the red-billed gull breeding colony, they say that what was a very poor breeding season has been revived by the abundance of dead limpets and other invertebrates.

Formerly frail chicks are now robust and heavy, and birds are laying new clutches of eggs that are larger in size than a month previously.

But the earthquake offered only a short-lived bonanza for the gulls, which face more serious long-term damage from climate change and from introduced predators such as feral cats. Their resilience is being tested – just as the human residents are being tested.

But consider another unexpected benefit of the uplift - sea level rise is one problem that Kaikōura residents won’t need to worry about now.

The impact of the earthquake

The Kaikōura earthquake has had an enormous impact on the land and the sea.

A giant underwater avalanche was triggered in the nearby marine canyons.

Timing was everything when it came to the impact of the quake on local wildlife.

On land, the Kekerengu Fault was one of the major drivers of the large earthquake.

David Schiel has studied other coastal ecosystems that have been affected by large, sudden change.

He was looking at the effect of moving Christchurch’s sewage outfall away from the Heathcote-Avon Estuary when its natural dynamics were suddenly changed by the February 2011 Christchurch earthquake.

Along with Chris Battershill, from the University of Waikato, he studied the impact of the Rena oil spill on the coast of Tauranga, which also proved to be remarkably resilient.

Jim and Deborah Mill’s study of red-billed gulls featured on Our Changing World during its 49th year.