When orchids smell like mushrooms - a tale of botanical deceit

Carlos Lehnebach has turned his bath tub into an experimental greenhouse, to study why some orchids smell like mushrooms and how that helps them to fool insects.

He says it raised a few eyebrows, especially when he had to ask if he could work at home for a week so he could “be in the bath tub, looking at fungus gnats having sex on flowers.” But he also points out that “it’s very convenient to be able to check the plants and insects each morning.” 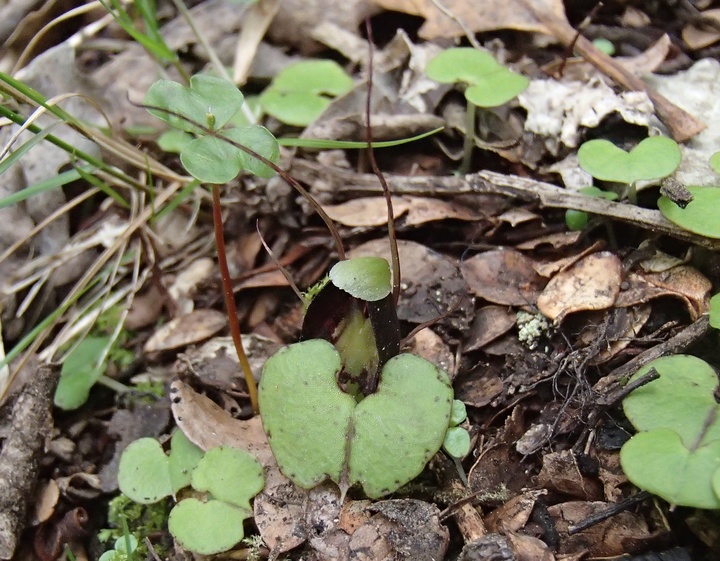 This spider orchid is known as Corybas 'Rimutaka'; it is a new species that hasn't yet been described. The long antennae-like features of the flower (the dark red object lurking behind the central green leaf) give the orchid its name. Photo: RNZ / Alison Ballance

The flowers in question are spider orchids. They grow on the ground, have a small heart-shaped leaf and a large red flower with four prominent antennae-like wires that give them an alien, insect-like appearance, hence their name.

The insects are tiny fungus gnats, which usually lay their eggs on mushrooms, on which the gnat larvae can feed and develop. 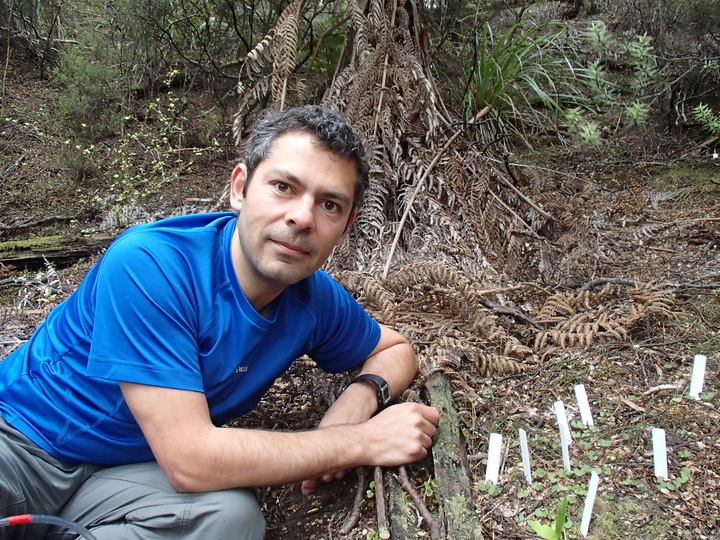 Carlos Lehnebach in his field site in the Rimutaka ranges. The small green leaves to his right are all spider orchids. Photo: RNZ / Alison Ballance 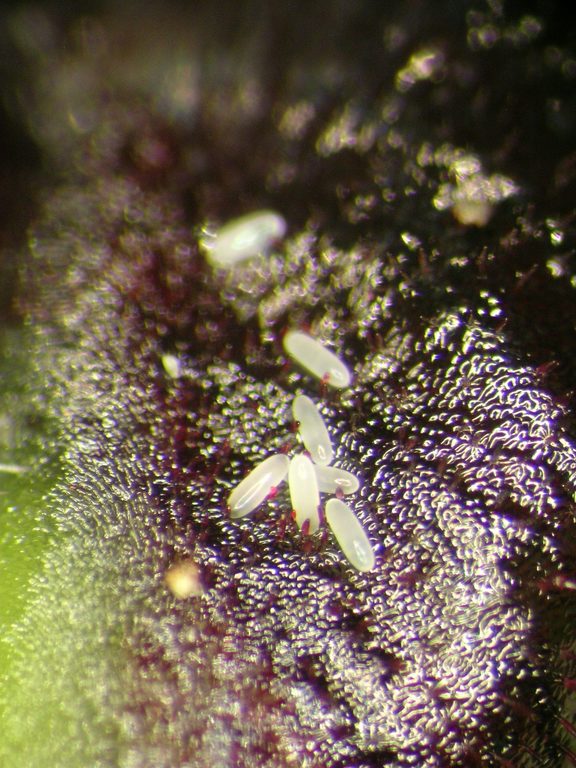 These fungus gnats eggs have been laid inside a spider orchid flower, because the female gnat mistakenly thought it was a mushroom. They might hatch, but the larvae won't survive. Photo: Carlos Lehnebach / Te Papa

But in late winter and spring, when the spider orchids are in flower, the fungus gnats get confused.

The gnats find themselves attracted to spider orchids instead, even going so far as to lay their eggs on them, and Lehnebach set out to discover whether this was because the flowers smell like mushrooms.

Lehnebach received funding from a Marsden Fast-Start grant to investigate the question ‘Does every spider orchid in New Zealand have its fungus gnat’, and the answer so far seems to be a resounding yes.

Humans can’t smell the orchid’s mushroom fragrance, but with help from Andreas Zeller, who carried out the research in Rob Keyzers’ lab at Victoria University of Wellington, Lehnebach has determined that each species of spider orchid that he has looked at has its own distinct scent profile which shares similar, as-yet-unnamed compounds with different species of mushroom. And it does indeed seem that this distinct odour attracts a different kind of fungus gnat. 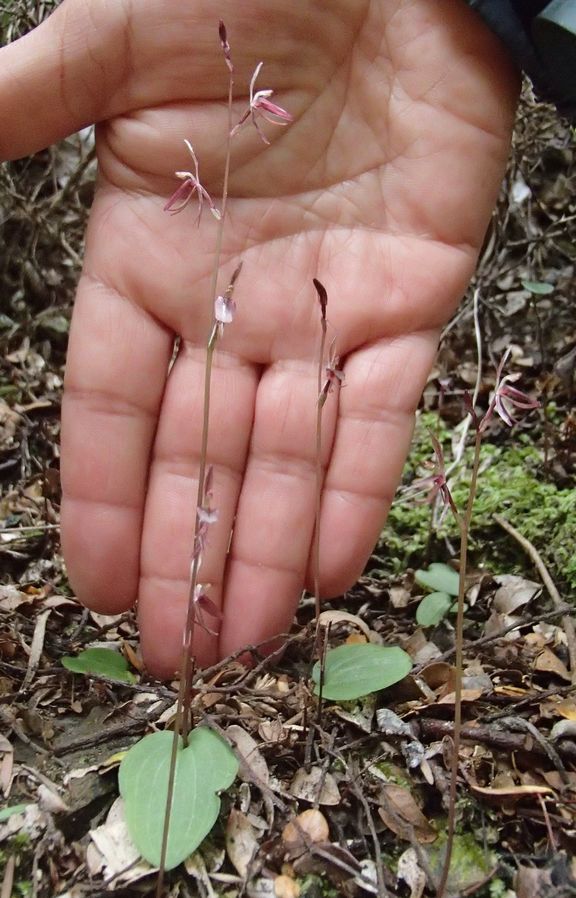 One of the unexpected aspects of this research has been the discovery that what was previously considered to be one species of orchid is actually five, and Lehnebach says that while he has to use genetic data to differentiate between the species, he is impressed that the fungus gnats are doing this based entirely on smell.

So why are the orchids deceiving the gnats in this way? Lehnebach says the plants need the fungus gnats to move their pollen between flowers, and since they’re not offering the usual incentive of pollen or nectar they are resorting to trickery.

Each orchid flower produces a single large bundle of pollen, rather than the usual floral strategy of millions of small pollen grains. This seems to be part of the strategy to cope with infrequent visits by its pollinators – it only needs a single visit for its pollen bundle to be collected and moved. But the plant still needs to lure the fungus gnat in in the first place, hence the mushroom smell. 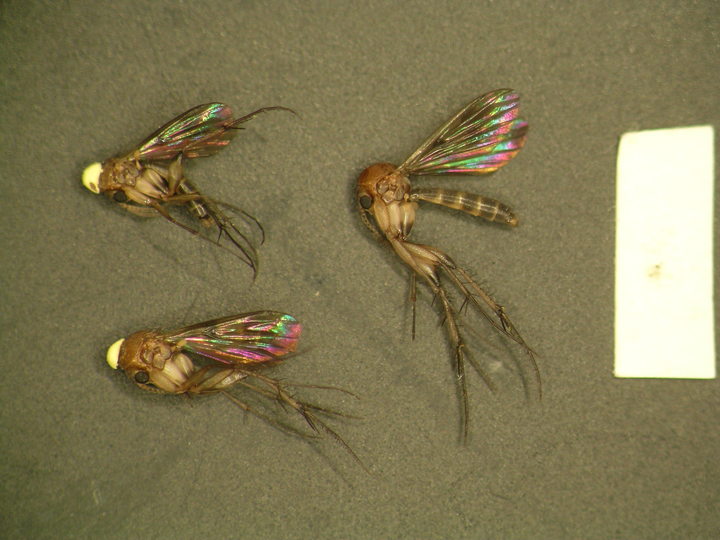 Fungus gnats (Mycetophila phylura). The white bar is 5mm long, and the yellow “backpack” on the insects is a packet of orchid pollen (pollinia). Photo: Carlos Lehnebach / Te Papa

The male fly is deceived into using the lip of the orchid as an arena, where he dances to attract a female. Once he has succeeded and the pair has mated on the orchid, the deception ratchets up another level. Now the female is tricked into laying her eggs in an orchid flower, even though they will certainly die as there is no food for the hatchling larvae.

While most New Zealand plants have very general relationships with insects, Lehnebach says his results are exciting, as they are a rare New Zealand example of a specialised pollinator-flower relationship. 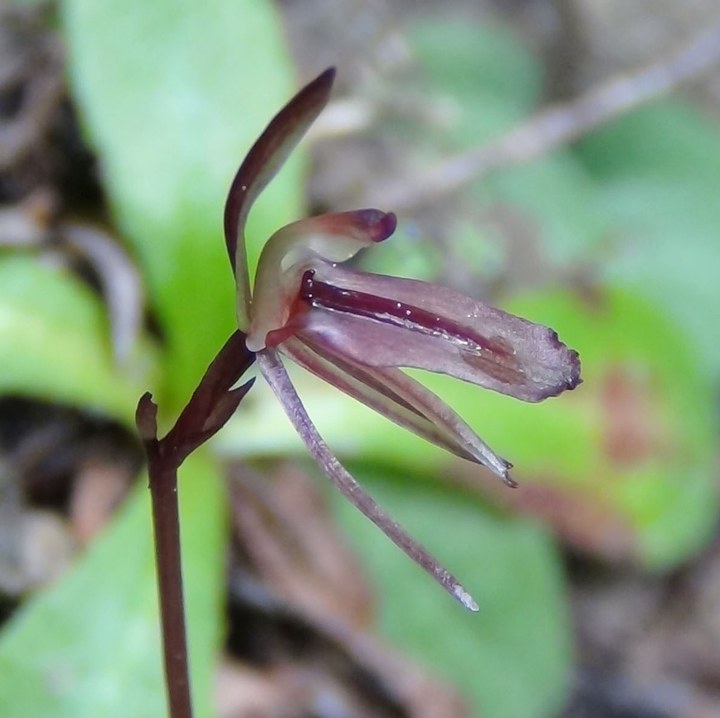 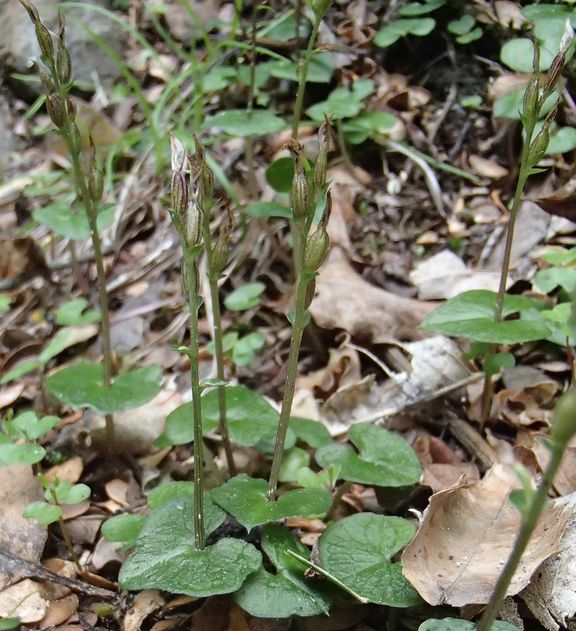 New Zealand has a rich orchid flora, with more than 100 species. Lehnebach says that his study site, in the Rimutaka Hills, in eastern Wellington, is an orchid hotspot with more than 50 species (a number which is increasing, of course, as he finds new species).

Lehnebach often finds large numbers of three or even four different species of orchids growing together on the forest floor, and he speculates that this is because they are sharing the same underground mycorrhizal fungi, which the germinating seeds rely on for nutrients.