In the footsteps of dinosaurs 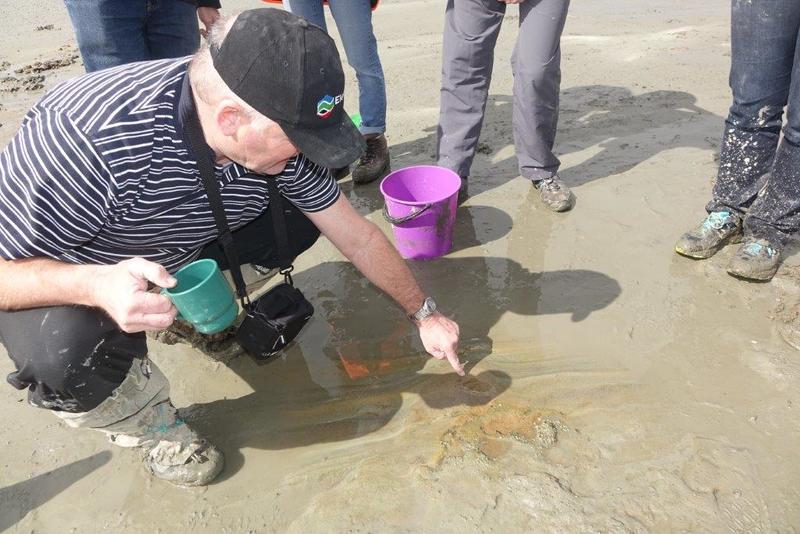 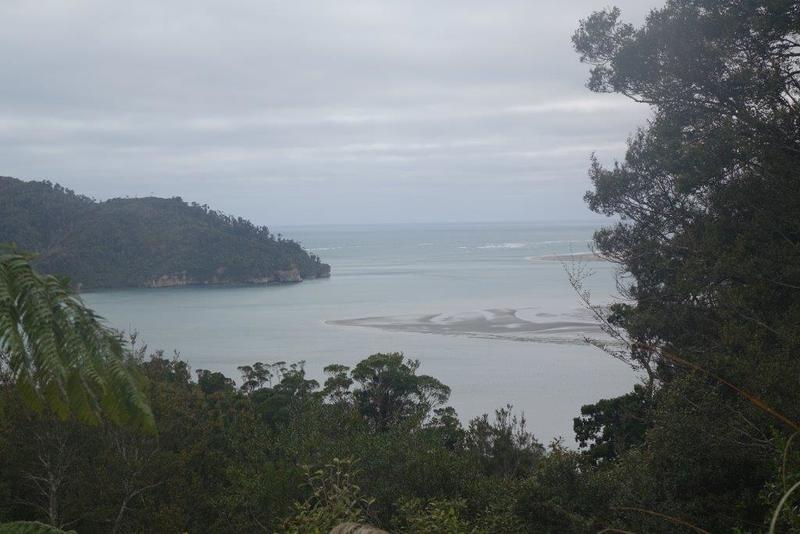 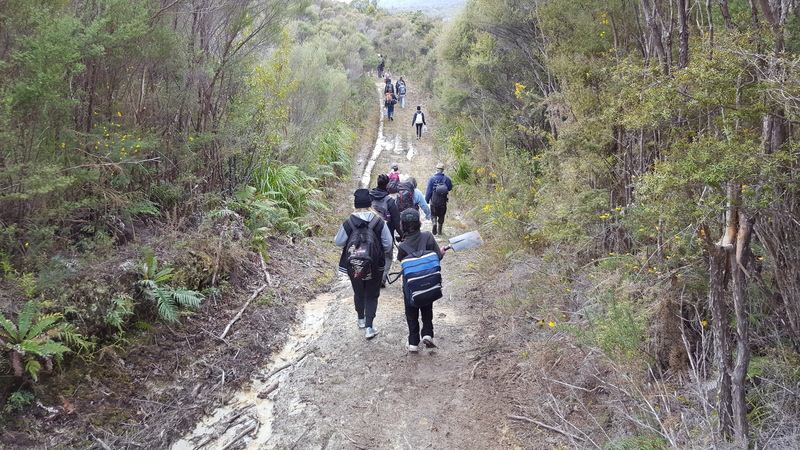 Away on a dinosaur discovery ... it was a brisk half hour walk to reach the dinosaur footprint site. Photo Tracy Neal 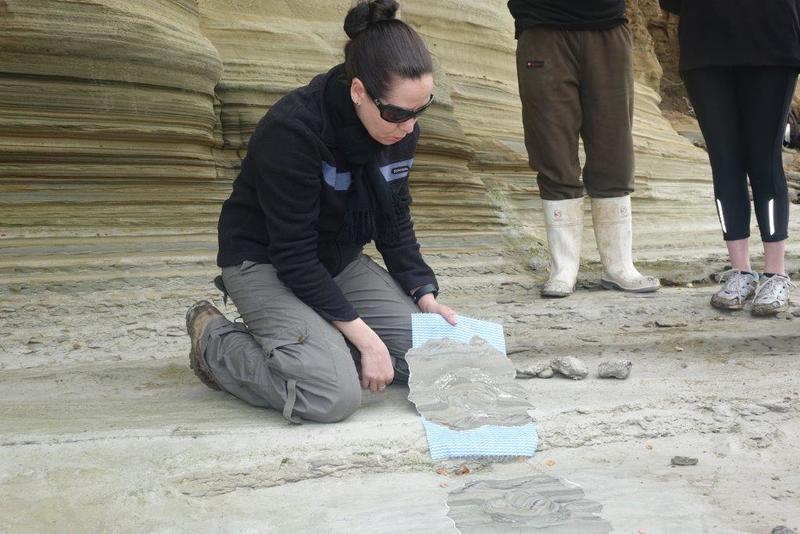 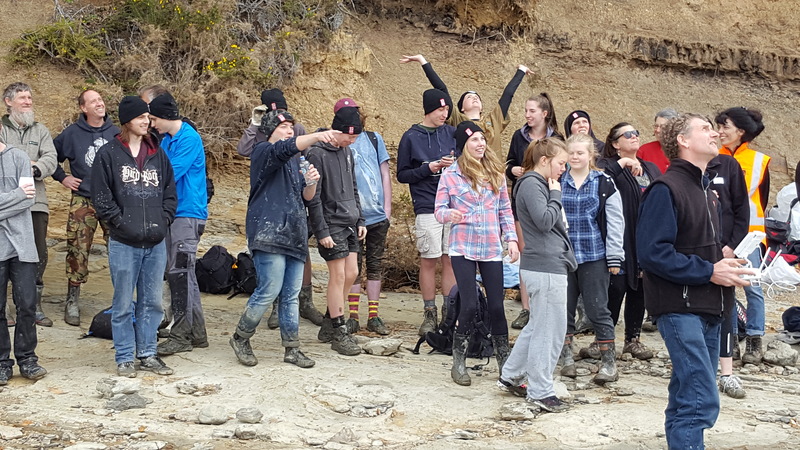 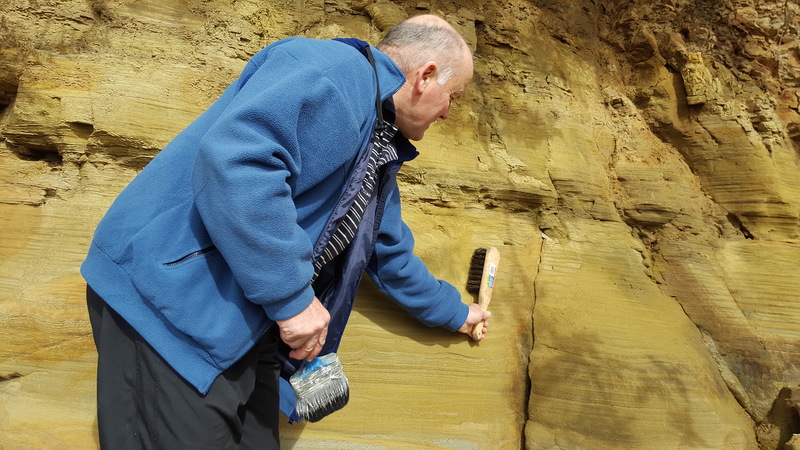 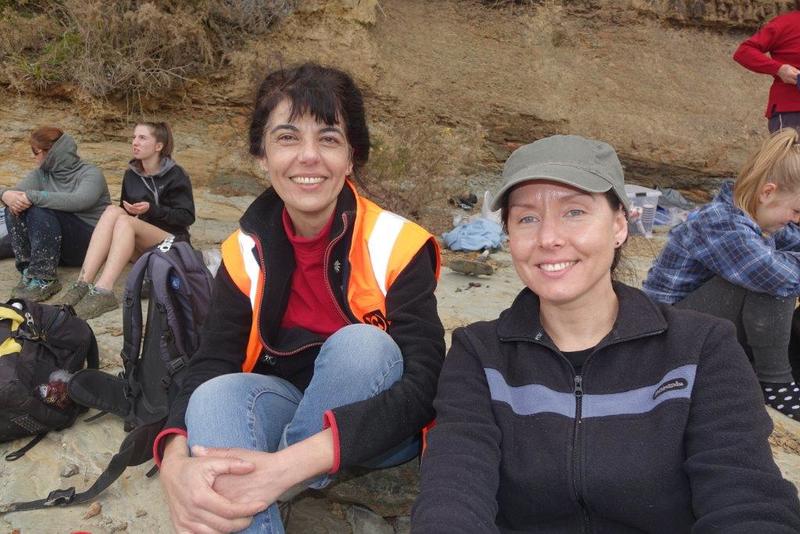 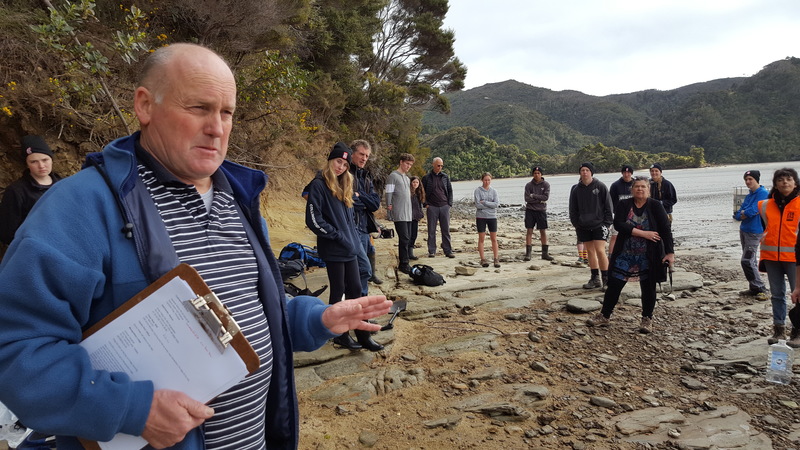 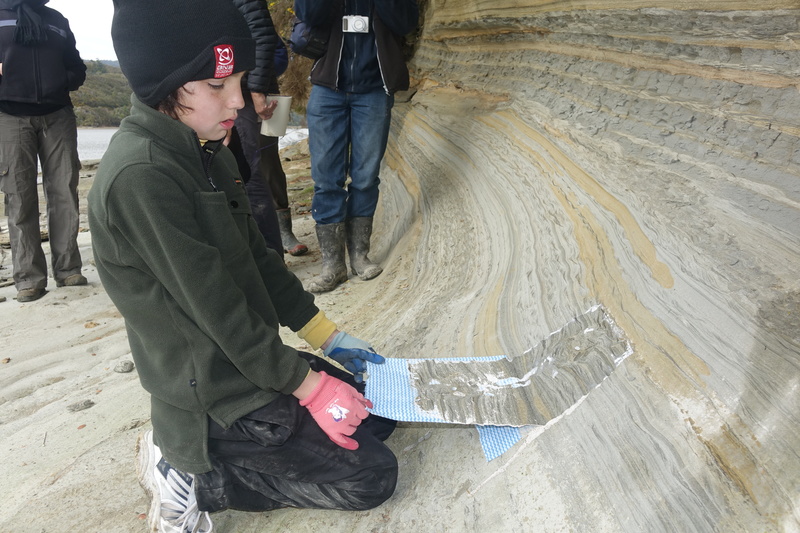 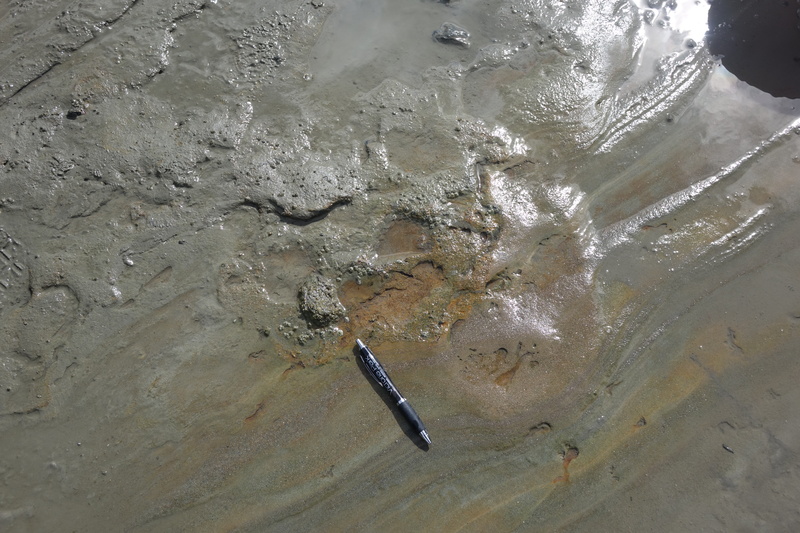 A brand-new dinosaur print is found, to add to the 50-or-so already discovered at this site. Photo Tracy Neal

Time, tides – and a few massive earthquakes – have opened a portal into our distant past. Over the last decade, geologists have discovered nearly 50 dinosaur footprints on the shore of a Golden Bay estuary.

It is the only place in New Zealand where dinosaur footprints have been found, and Greg Browne from GNS Science is always hopeful that erosion might reveal more.

On a recent field trip he enlisted students from Collingwood Area School to help in the search at a remote area deep within Whanganui Inlet – a large estuary south of Farewell Spit, on the fringes of Kahurangi National Park. 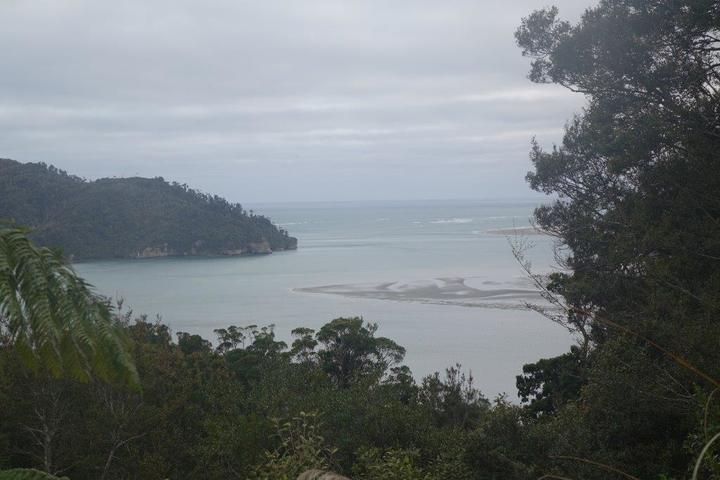 Dr Browne said the field trip was an ideal way to engage students in some hands-on science, and show them what was in their back yard.

Dr Browne said it was important not to reveal exactly where they were, because of concerns about potential vandalism. 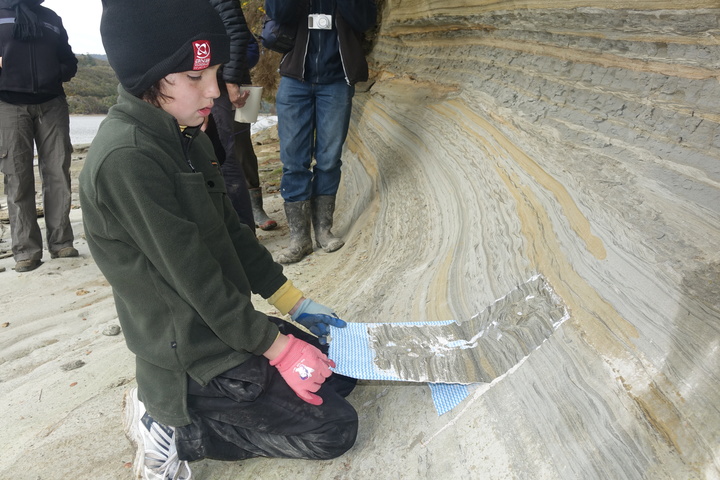 Year-6 student Colin Wells, who confessed to being the school's dinosaur expert, said the dinosaurs that roamed these parts were sauropods, which were large herbivores. They thrived in a lush, coastal environment that Dr Browne said was much the same then as it is now.

Dr Roncaglia pointed out, though, that there was one key difference.

"The last stage of the Cretaceous period was a very hot time, so it was a very, very warm world but New Zealand - or this part of the globe - was 70 degrees south [in latitude] so much closer to the [South] Pole. It wasn't a tropical world, but it was a warmer world."

The Italian-born micro-palaeontologist came to New Zealand a decade ago to help calibrate our geological timescale to align with the international one. She said quantifying how warm the ocean was isn’t easy but plankton diversity in the waters around New Zealand at the time was "extremely high", which is not typical of polar water.

Dr Browne said that most dinosaurs had bird type feet, with three digits. But the sauropod had distinctive feet that were more like those of an elephant, and could be larger than a car steering wheel.

When the sauropods walked, or ran, their feet punched through the sediment, compacting it and leaving clear imprints with sharp margins. These then filled with sand or mud, or a mix of both.

And here's a twist … Dr Roncaglia said massive tectonic forces, which buried these signs over millions of years, have also helped reveal them.

"All these layers of this environment got submerged under a very deep sea, which happened much later than the Cretaceous and dinosaur time, which is how they became cemented. After many millions of years all this material came up again, through tectonism primarily, and that is why it is exposed and in exactly the same kind of environment."

Dr Brown said every print was different - a bit like a thumb print. He was not sure why this small corner of New Zealand is a dinosaur treasure trove, although he has a strong theory.

"It was a thoroughfare where the dinosaurs walked through. They were perhaps migrating - foraging for food." 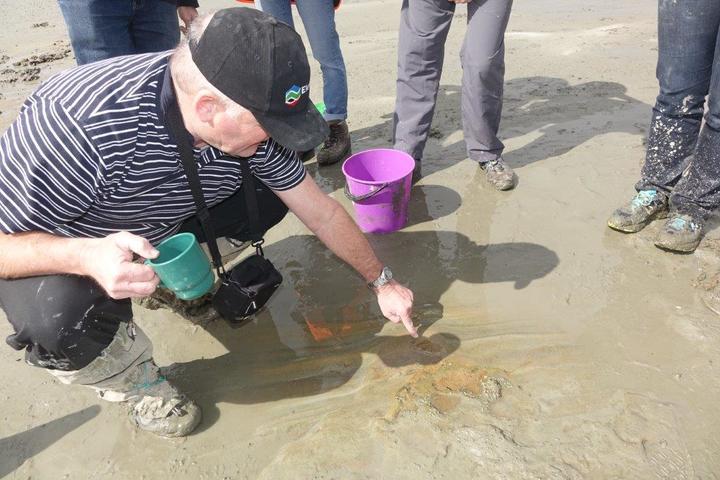 Dr Browne discovered the footprints by accident, about 15 years ago, while searching for clues of oil and gas.

"I'd always had in the back of my mind they were dinosaur footprints. I didn't really know what they were but considered it a possibility."

He said confirmation was not so much a “eureka moment”, but more a case of analysis over a number of years until eventually the penny dropped.

Dr Browne said he was at first sceptical, but the prints could not be explained any other way.

“It’s really important, as it’s the only discovery in New Zealand and it’s a piece of geological history that most other countries have but we didn’t up until then.”

As she helped students with the task of sweeping thick mud from the rocks beneath, Dr Roncaglia said that the Golden Bay discovery was important on a global scale. 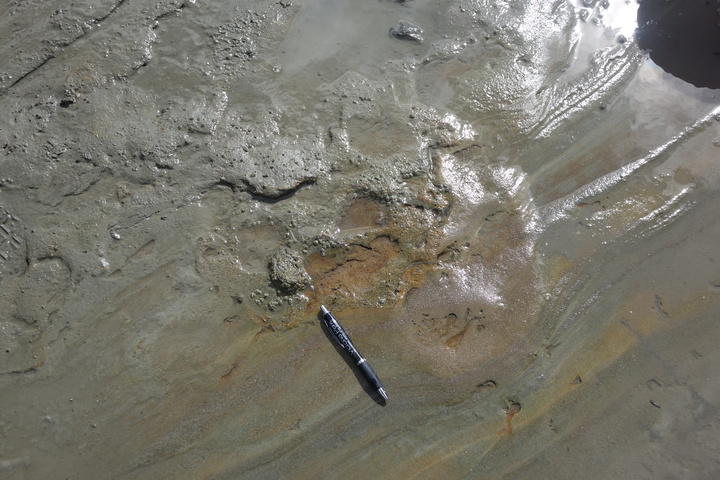 After the initial disappointment that a shape in the rocks turned out to be just the shadow of something else, a discovery was finally made - a new dinosaur footprint.

Dr Browne described it as a brilliant find.

Student Violet Wells said it was amazing to be among the first to see something no one else ever had.

“It’s weird dinosaurs were once in this area. It’s quite amazing we’re where they actually walked – it’s an actual footprint and not just something someone’s made.”

Student Meghan Zeller said the experience told her she was on the right track with her biology, and earth and space studies.

“Geology is something I’ve always been really interested in, so this is an amazing experience to be able to see what it’s actually, kind of, like.”

She had not known much about the history of the area before the field trip.

“It was kind of a shock to know it was right on our front doorstep. It was crazy to find out about it, and it’s so interesting knowing it is just here,” Meghan said.

The future of the footprints 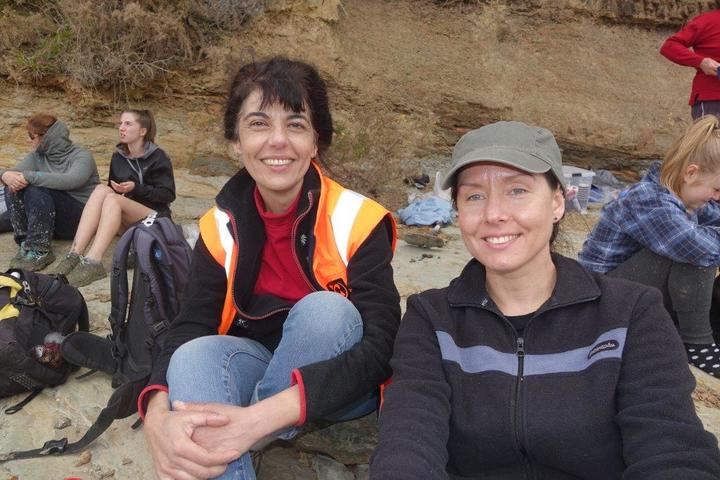 Dr Browne said that even though the prints were vulnerable to erosion and might disappear, they had decided to leave them where they were rather than dig them up.

He said they need to be preserved as taonga, so future generations could see them in the place they were made, where the dinosaurs walked.

Part of Ms Terezow’s role on the field trip was to take copies of the footprints with a method using liquid silicon which then set to make ‘peels’.

She said by doing this every couple of years they would be able to track any changes in the way the footprints looked, and also find out whether these trace fossils might one day disappear - just as the dinosaurs themselves did, 65 million years ago.

Students from Collingwood Area School, in Golden Bay, were able to join the GNS Science geologists thanks to a grant from the Curious Minds programme, which recognises and celebrates the importance of science and technology in New Zealand.