Glow in the dark - firefly squid and bioluminescence

Each year, between March and June, Toyama Bay on the west coast of Japan experiences a dazzling spectacle as millions of deep-sea squid come to the surface to spawn. The small, short-lived Japanese firefly squid, or hotaru-ika (Watasenia scintillans), glow bright blue when they are disturbed, either by waves or by the many people who flock to see – and eat – them. 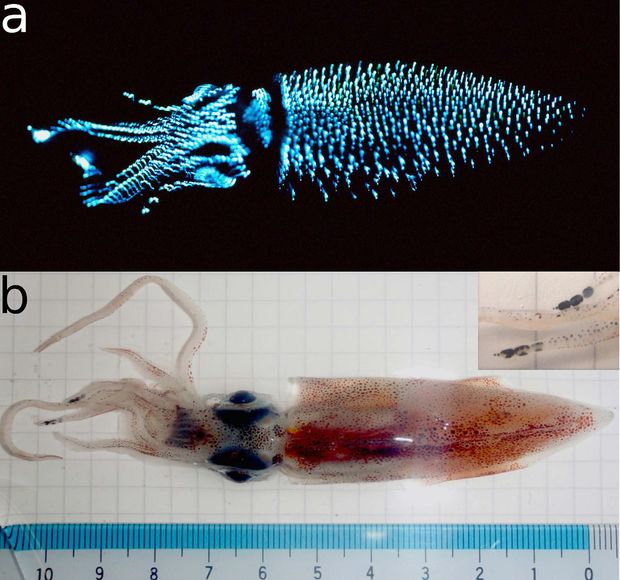 The Japanese firefly squid glowing (a) and under natural light (b). The small inset shows the light organs at the tip of two of its arms. These images come from a paper by Miriam Sharpe and colleagues in Scientific Reports. Photo: CC-BY Osamu Inamura / Neil Paterson

The sight is particularly striking at night, but the blue lights at the tips of two of the bioluminescent squid’s arms are so bright they can be seen even during the day. 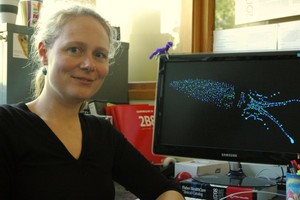 Miriam Sharpe with a photo of a glowing firefly squid. Photo: Michele Krause / University of Otago

It’s this intense glow that caught the eye of biochemist Miriam Sharpe, at the University of Otago.

Researching the proteins involved in the light produced by glow worms, she was excited to discover that the firefly squid actually generate their own light-producing protein crystals. The squid is the only organism known to produce light that way; other squid species that glow are lit by symbiotic bacteria.

Miriam explains that normally she has to find ways of growing protein crystals in order to find out what the proteins look like and how they work – but in this case the squid had already done that for her.

“Naturally occurring protein crystals is an amazing thing to stumble across. So I thought why don’t see if we can get hold of some of these crystals, shoot some x-rays at them and see if we can solve the structure of the proteins inside these crystals.” 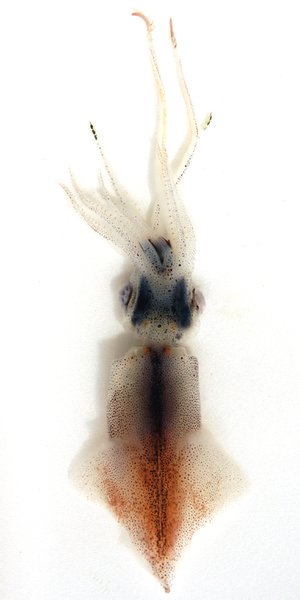 Efforts to study the crystals with a giant microscope known as the Diamond Light Source synchotron have come up short, so Miriam is trying to devise new methods. But what she has managed to do is identify the proteins, using two different techniques. As well as sequencing the RNA, which identifies the genes that encode each protein, she’s used mass spectrometry to sort the proteins by size.

“The crazy thing,” says Miriam, “is there are three proteins in the crystals … and it turns out they are in the same super-family of proteins as the bioluminescent proteins you find in fireflies, which is entirely unexpected.”

That’s because squid and fireflies are not closely related – and their bioluminescent abilities have evolved independently.

The proteins in the crystals are enzymes which catalyse, or speed up, the chemical reactions that produce light.

To try and produce more squid protein crystals to work with, Miriam has gone back to the tried and true technique she has been using with the glow worms - growing crystals in the lab.

“We have to figure the best way to get a lot of the enzyme,” says her collaborator Kurt Krause. “Then we have to purify it, and grow crystals of it - which look like mineral crystals but are crystals of proteins. Then we use protein crystallography to generate enough data to allow us to do the structure of all the atoms of the enzyme.

This process can be time-consuming and frustrating.

“The biggest challenge is making the protein happy. Because protein molecules, I think, are a lot like cats. You can’t get them to do what you want … so it involves a bit of cajoling to get the protein happy in the lab.”

Firefly squid produce light from three different light-emitting organs or photophores. The brightest, which interest Miriam, are the three large organs found on the tips of each of the fourth pair of arms. But there are also five smaller light organs around each eye, and hundreds of minute photophores scattered through the squid’s skin that produce some green as well as blue light. The overall effect is like a dense scattering of stars in the Milky Way, but in the shape of a squid.

Miriam’s firefly squid research is funded by a Marsden grant. The Marsden Fund supports basic ‘blue sky’ research and the funding is highly sought after.

She and her colleagues have recently published a paper in the open access journal Scientific Reports describing the three proteins they have discovered.