Two earthquakes an hour. Fifty seven earthquakes on an average day. No wonder New Zealand is nicknamed the ‘shaky isles.’

And the shakiest place of all? Fiordland. 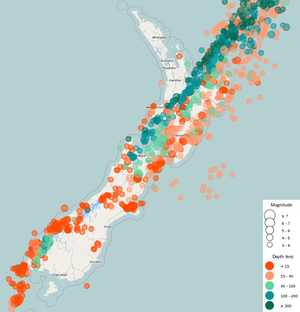 All the earthquakes greater than magnitude 3 that GeoNet has recorded in the last year. Photo: GeoNet

Every one of those rumblings has been detected by GeoNet, the ‘official source of geological hazard information for New Zealand.’ And, in the 15 years since GeoNet was established, those twice hourly shakes have added up to a whopping 314,000 earthquakes (and counting).

Most of these earthquakes are so small and deep that nobody notices them – but, on average, once a year a magnitude six or greater comes along, more than sufficient to cause damage to land and buildings.

And when the earth starts rocking, people start clicking.

“During widely felt earthquakes,” says GeoNet Director Ken Gledhill, “there [are] 16,000 hits per second on our website.”

In return for that scientific data, the public supply their own; filling in nearly one million ‘felt earthquake’ reports since 2004, helping GeoNet staff understand how the earthquake was experienced at different locations. 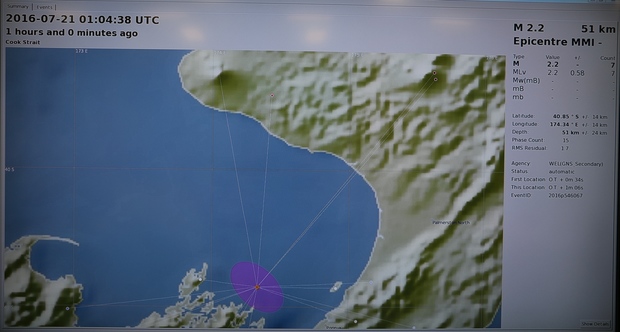 GeoNet records on average 57 earthquakes a day. This earthquake in Cook Strait was magnitude 2.2 and happened at a depth of 5km. The orange spot marks the most likely epicentre. Photo: RNZ / Alison Ballance

From three months to a minute …

The Earthquake Commission-funded and GNS Science-run website has come a long way in 15 years. These days it takes just a minute-or-so for the network of detectors to measure a shake and calculate its location, magnitude and depth, and to produce a map of ground-shaking intensities.

Barely two decades ago that could take up to three months because the small network of detectors back then were located on farms, and geologists relied on farmers for weekly mailings of data recorded down on the farm.

Caroline Little, a public information specialist at GeoNet, says there is now a team of duty officers on-call 24 hours a day. Their job is to double-check and refine the initial calculation produced by the computer. 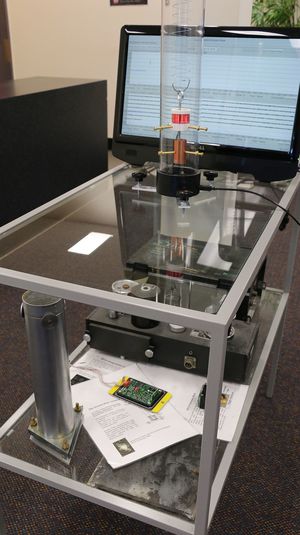 More than 600 earthquake detectors are positioned around New Zealand, including 142 main seismograph stations, and a further 225 that can be used to help pinpoint positions. A further 200-or-so GPS stations detect minute movements of the land, and add another layer of information.

The best coverage is in the Bay of Plenty and Tongariro regions, Wellington and the Wairarapa and around Christchurch.

The North Island focus is because it is so prone to earthquakes, sitting above the subduction zone where the Pacific Plate is pushed down under the Australian Plate. This is part of the Pacific Rim of Fire.

The shakiest place in New Zealand 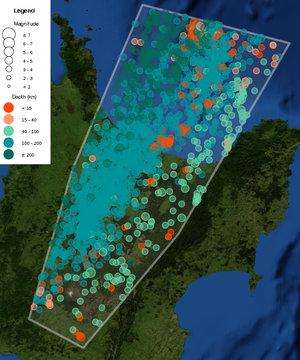 The Bay of Plenty and Tongariro regions record many small, deep earthquakes. This map is of all earthquakes greater than magnitude 3 between 2008-10. Photo: GeoNet

The Bay of Plenty and Tongaririo regions record the most earthquakes but, as Caroline points out, that’s partly because GeoNet has lots of detectors in that area. Many of these earthquakes are very small and deep - more than 90 percent of them are deeper than 40km, and even the tiniest quakes get recorded.

“Around the volcanoes we've recorded 1000 quakes smaller than magnitude 1 in the last year” says Caroline.

Earthquakes in Fiordland, on the other hand, are larger, shallower, and as a result more damaging. But fewer are recorded.

“The coverage of our network isn't as good as the North Island so it's likely we're missing smaller quakes, of less than magnitude 3,” says Caroline, “But not counting the small quakes, 90 percent of Fiordland's quakes are shallower than 40km."

So, on balance, Fiordland takes the prize for the shakiest place.

Further north, a different kind of shaking is going on … although you’d be forgiven for not noticing.

Slow slip earthquakes are places where the Pacific and Australian plates are moving very slowly past each other. Over the course of many months or even years, the overall movement of the land is equivalent to a large earthquake, up to a magnitude 7, but nothing is felt, except by very sensitive GPS stations recording the movement.

Well-known slow silent earthquakes are taking place on the Kapiti Coast, Wairarapa and east coast of the North Island. 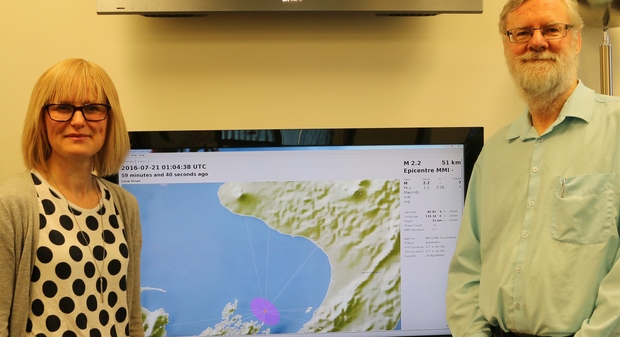 GeoNet has just changed how it collects ‘felt earthquake’ reports. Now it offers a simple pictorial representation that must be completed within one hour after an earthquake.

GeoNet is hosted at GNS Science, and funded by the Earthquake Commission (EQC) which puts in $12 million each year.

As well as earthquakes, GeoNet detects and monitors volcanoes, tsunamis and landslides. It also monitors buildings and bridges to see how they respond to earthquakes, and collects data for research.

All data collected by GeoNet is freely available.