Their vision is to use design and technology to develop resilient communities and encourage a debate about climate change.

The pair has been in residence at the Otago Museum for the past month as part of Climate Kit, a project commissioned by ZERO1 American Arts Incubator. 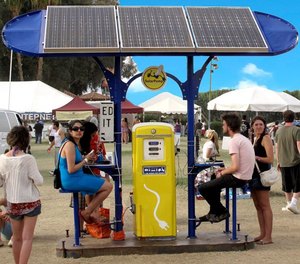 Solar energy is a recurring theme in Beth’s work. Through Sol Design she has created public solar electric charging stations that she hopes will help people re-imagine the future of transportation and help the move to carbon-free cities.

The SolarPump Electric Charging Station combines a 1950s Citgo gas pump, which has been modified with a LED display that shows the power output of solar panels mounted on the roof.

Beth says anyone can walk up and charge a cellphone, laptop, or even an electric bike or scooter – for free.

The SolarPump has been installed on campus at Stanford University, and appears at events such as music festivals.

Beth says the SolarPump would also be an ideal community resource following a civil emergency such as an earthquake.

Beth works at Sol Design Lab and the University of California Davis. 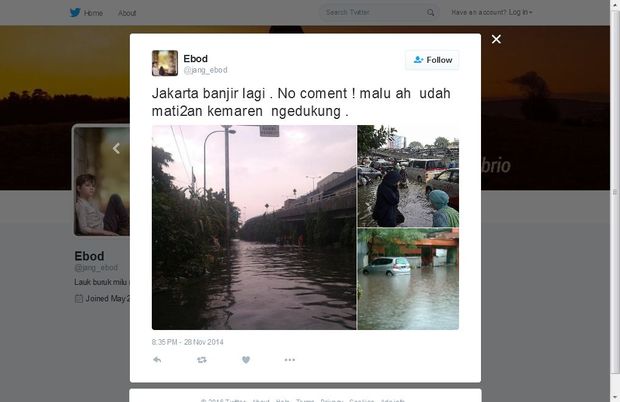 Jakarta boasts the most Twitter users in the world, and Peta Jakarta uses their tweets to gather, sort, and display information about flooding for Jakarta residents in real time Photo: Supplied 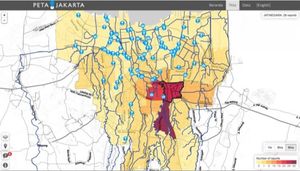 A PetaJakarta map showing the density of flood-related Tweets in each district of Jakarta. Photo: PetaJakarta.org

Sara’s work also involves emergency response. She is part of the team that developed Peta Jakarta, which uses tweets from Jakarta residents to identify city areas affected by floods. She says when people tweet the word ‘peta’ – flood – they are asked to give more information about what is happening in their neighbourhood.

Jakarta has more Twitter users than anywhere else in the world.

The Jakarta Government now uses the information from Peta Jakarta to gather, sort, and display information about flooding for Jakarta residents in real time. It also works at a neighbourhood level, with locals able to find out from each other where, for example, they might be able to cross a flooded street.

Sara works at the California College of Art and at Stamen Design in San Francisco.

Sara has developed an idea for emergency emojis, which she has dubbed ‘emerjis’. Emojis are symbols such as smiley faces used in social media.

Sara and Beth think a universal language of emergency symbols, such as earthquake, would help eliminate language barriers between local residents and international disaster relief teams that often communicate in English.

The four Climate Kit community projects that Sara and Beth have been involved with in Dunedin are:

Bones and Stones: a “field guide” for New Zealand geology, including two enlarged “core samples” showing the geologic long-view of the environment.

Shedding Some Light: a project that examines the proposed lighting solutions for high-efficiency street lighting and “dark skies” proposals for the town to be able to enjoy the Aurora Australis by limiting light pollution.

Living Map: a data-enabled relief map of the Dunedin area for community conversation about the past, present, and future geography of this vulnerable coastal city.

The Climate Kit exhibition is on at Otago Museum from 6-16 August 2016.