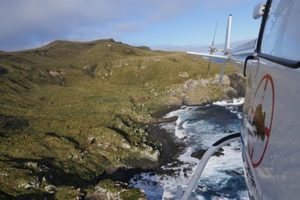 Mice be gone. An ambitious project to get rid of the small introduced rodent from one of New Zealand’s most remote islands has just been successfully completed.

Stephen Horn, from the Department of Conservation, is project manager for the Antipodes Island mouse eradication. He reported late on Tuesday afternoon that the 13-person team, that has been on the subantarctic island since late May, had completed the second aerial application of poison bait.

“We have done everything we can,” said Mr Horn. “And now we have to wait and see if we are successful with the monitoring in a couple of year’s time.” 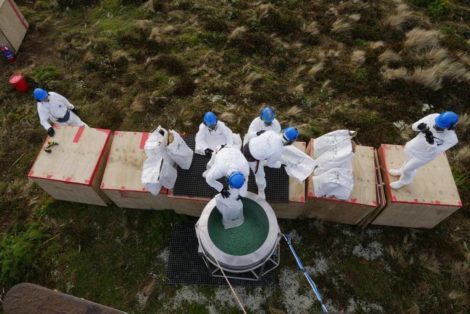 The Million Dollar Mouse eradication has been in the planning for the last few years. It involved spreading 65 tonnes of poison bait across the island using two helicopters. Two applications of bait were made across the entire island, a fortnight apart, to ensure that every mouse on the island had a chance to find and eat some bait.

It is the most recent in a string of eradications, that have seen mice, three species of rats, feral cats, possums and goats removed from various New Zealand islands. Previous successful eradications have spanned from Raoul Island in the subtropical Kermadecs to Campbell Island in the subantarctic. 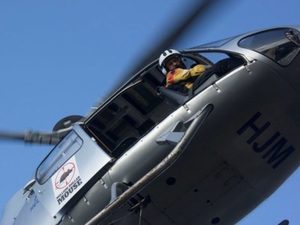 The flying skills of helicopter pilots Darron McCully (pictured here) and Tony Michelle have been crucial to the success of the mouse eradication. Photo: Finlay Cox / DOC

Introduced predators such as mice have a damaging impact on native vegetation, birds and invertebrates. Mice usually eat seeds and invertebrates, but on Gough Island, in the South Atlantic, they have become much bigger and hunt together to attack and kill large seabirds such as albatrosses.

On Antipodes Island the mice have had a significant effect on an endemic land bird, the snipe – on the main island it is rarely seen, but it is common on smaller mice-free offshore islets. It is expected that the populations of snipe, small seabirds and large invertebrates will bounce back quickly once the mice are gone. 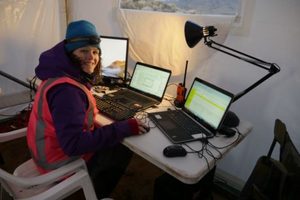 GIS expert Ann DeSchutter monitored the bait drop to ensure that the baits were reaching every part of the island. Photo: DOC

Million Dollar Mouse has been jointly funded by the Department of Conservation, the Morgan Foundation, Island Conservation, WWF-New Zealand and public donations. The operation was originally costed at one million dollars, but has ended up being significantly more expensive. An infographic on the Million Dollar Mouse web site puts the cost at $3.9 million dollars, but RNZ understands the actual cost may be more than that.

The expedition, which includes three helicopters, is due to be picked up from Antipodes Island in early August. In winter 2018 a team will revisit the island to look for signs of mice, and confirm whether or not the eradication has been successful.

Our Changing World visited Antipodes Island in late 2014, as part of the preparation for the mouse eradication.