In this medley of marine science stories from the New Zealand Marine Sciences Society annual conference  we hear about the challenges involved in trying to restore mussel beds in the Hauraki Gulf.

We discover a deep-sea shark that feeds only on egg cases laid by other kinds of deep sea sharks.

And we report on the first-ever discovery of Antarctic toothfish eggs in the Ross Sea. 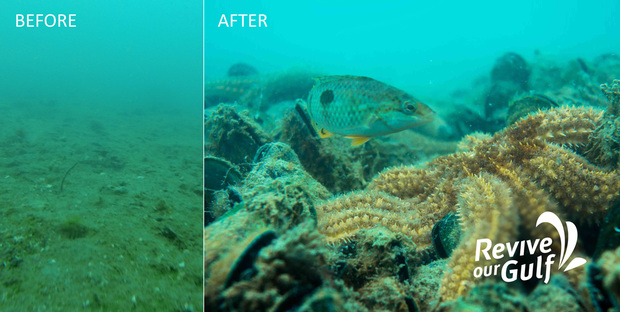 On the left is the sediment-covered floor of the Hauraki Gulf before, and on the right hand side is how it looks after thousands of mussels have been reintroduced. Photo: Revive our Gulf

Until the 1950s the floor of the Hauraki Gulf was covered in a dense layer of mussels, which filtered and cleaned the waters of the Gulf. The mussels provided substrate for a rich marine ecosystem, of fish and invertebrates.

After several decades of intense commercial dredging the mussel beds were ruined. Today, the floor of the Gulf is covered in a thick layer of sediment, with just a few remnants of the once-widespread mussel beds.

Enter Revive our Gulf, a group of people who wondered if it might be possible to restore the mussel beds.

Shane Kelly, from Coast and Catchment, is the only scientist in the group. At the 2016 New Zealand Marine Science Society conference he reported that, in 2013, seven tonnes of mussels, provided by the mussel aquaculture industry, were put out on an area of sea floor as a trial, to see if they would establish. In 2014, another 70 tonnes were spread over an area of about 10.5 hectares.

Shane says they are learning by doing, and it hasn’t all been straight-forward. About 40 per cent of the mussels died early on, either from stress or being damaged. Although up to 80 percent of the mussels have now died, probably as a result of being smothered by the thick sediment, in places the mussels are surviving and other creatures are moving in.

The trials are currently on hold, as there are concerns about biosecurity and spreading invasive organisms around the Gulf.  But Shane reports that Revive our Gulf is keen to carry on, despite the challenges.

He says that next time they will add a thick layer of shell before they place the mussels, to help lift them out of the mud. 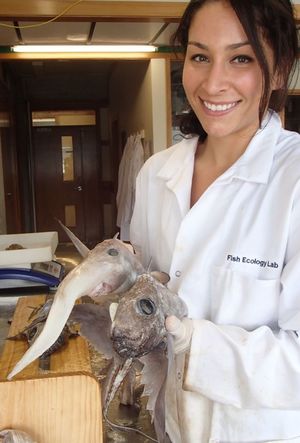 Brit Finucci, from Victoria University of Wellington, is studying little-known deep sea sharks that are accidentally caught in commercial fisheries around New Zealand.

By examining the dead sharks she is developing a picture of their reproductive biology and also their diet.

One of her favourite sharks is the prickly dogfish, which grows to about 75 centimetres long, and is caught at depths of 200-1000 metres.

Brit dissected the stomachs of about 50 prickly dogfish, and although many stomachs were empty some of them contained a yellow yolk-like substance.

DNA analysis of this revealed it to be the eggs of two other deep sea sharks: the brown chimaera and the Pacific spookfish.

Brit says this is the first time that a wild shark has been found to depend entirely on other shark species for food.

Habitat cascade - or how things stack up in an estuary 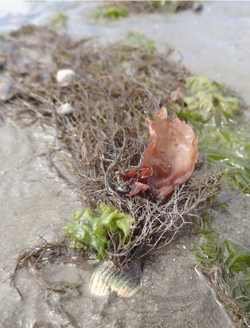 How things stack up in an estuary. At the base is a cockle, and stacked up above it are five more levels of life. From the bottom up it goes cockle, seaweed, a snail, bryozoans, a different seaweed and more snails. Photo: Mads Thomsen / University of Canterbury

Eliza Oldach is a US Fulbright Fellow at the University of Canterbury. She has been working with Mads Thomsen and David Schiel on a long-running study of marine life in the sediments of the Avon-Heathcote estuary.

They have been documenting ‘habitat cascades’. Eliza says a habitat cascade is basically plants and animals living on one another. On land, a classic three-level example might be a tree – vines or epiphytes grow on the tree, and birds nest in the epiphytes.

In the Avon-Heathcote estuary, researchers from the Marine Ecology Research group have documented some of the longest habitat cascades found to date, made up of six levels.

Cockles provide a hard substrate for sea lettuce, or Ulva, to grow on. Trochoid snails live on the Ulva. Bryozoans live on the snails, and in turn they support red marine algae that provide a habitat for more snails.

If microbes are taken into account, Eliza suspects the estuary habitat cascade will be even longer. 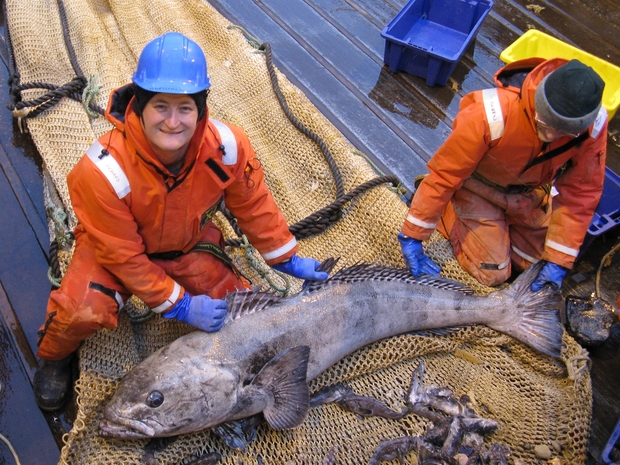 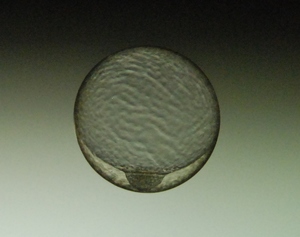 For the first time scientists have found the eggs of Antarctic toothfish. This egg is just over 3 days old. It was spawned in mid-winter on the edge of the advancing winter sea ice i the Ross Sea. Photo: D. Stevens / NIWA

Scientists, working on board the ice-strengthened fishing boat Janas, have been braving mid-winter conditions and almost total darkness at the advancing edge of the Antarctic sea ice, in a daring effort to find out when and where Antarctic toothfish spawn.

Steve Parker from NIWA reports that, for the first time, the team has successfully found adult Antarctic toothfish in spawning condition. Using plankton nets the team has also collected eggs floating in the water column.

Scientists from NIWA and MPI have been collaborating with the Antarctic toothfish fishery for about two decades, to collect information on the biology of the fish, with a view to setting fishing quotas.

More recently they have been studying fish in McMurdo Sound, expanding the work to understand the role of Antarctic toothfish in the Ross Sea ecosystem

The summer fishery can reliably identify where sub-adult and adult toothfish are found, but the missing piece of the puzzle has been the early life stages of the fish.

Steve says they suspected that Antarctic toothfish eggs are pelagic, meaning they float in the water column. They float at the mercy of currents and gyres, until they settle out on the sea floor as young fish.

Steve says the research voyage has caught mature male and female fish, and been able to fertilise eggs with sperm. They can now track the development of these known-age eggs hour by hour, to find out how buoyant they are and how this changes as they develop.

This will allow the scientist to calculate at what depth the eggs float in the water column, and therefore how they will be moved around the Ross Sea.