Rarest sea lions in the world - and the threats they face

New Zealand sea lions are the rarest sea lions in the world. They have a threat classification of nationally critical. The total population, including pups, is less than 12,000 animals. And in the decade up to 2009, the number of pups born annually at the sea lion’s main breeding grounds, in the Auckland Islands, halved. 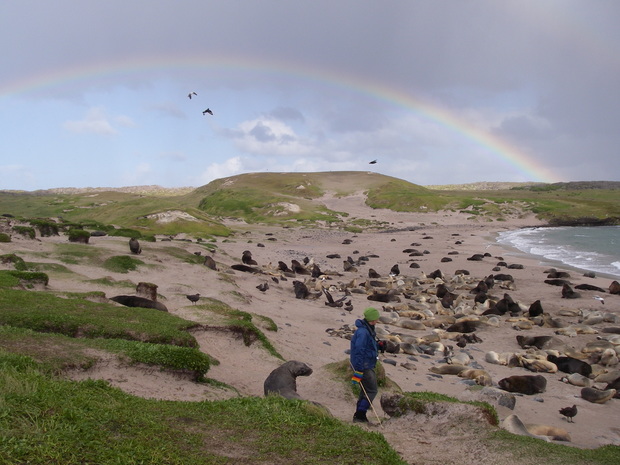 Sandy Bay on Enderby Island, in the Auckland islands group, is one of the main breeding colonies for New Zealand sea lions. Photo: RNZ / Alison Ballance

About two thirds of New Zealand sea lions breed at the subantarctic Auckland Islands. In the past 50 years a breeding population at Campbell Island has grown steadily, and now accounts for about a third of the population. There are very small, but growing, populations at Stewart Island, and on the Otago Peninsula, on mainland New Zealand.

In response to growing concerns about the sea lions, the Department of Conservation and the Ministry for Primary Industries have drafted a sea lion threat management plan, which is currently open for public consultation.

This plan is based, in part, on a risk assessment of threats, which was carried out by NIWA. The assessment was led by modeller Jim Roberts. 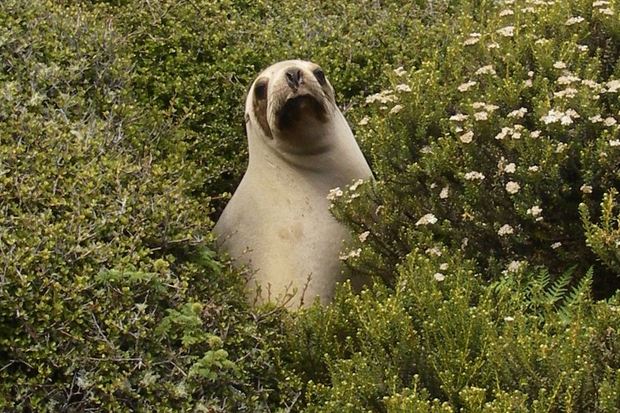 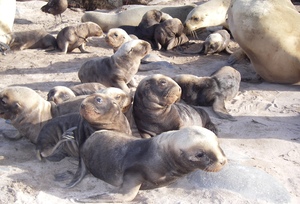 The number of New Zealand sea lion pups produced at the Auckland Islands each years halved between 1998 and 2009, from 3000 a year to just 1500. Photo: RNZ / Alison Ballance

Jim says that the sea lions face a variety of threats in different parts of their range. Disease, especially Klebsiella pneumoniae, has been a significant problem at the Auckland Islands. After several epidemics that killed significant numbers of pups in the early 2000s, the disease is now endemic in the population.

Previous research has showed that New Zealand sea lions at the Auckland Islands are living on an energetic knife edge, meaning they’re only just managing to find enough food.  They dive to depths of more than 200 metres to find food, making them the deepest diving Otariid or eared seal in the world.

There seems to be higher quality food available at shallower depths for sea lions in the waters around Stewart Island and the Otago Peninsula, although Jim cautions that as the populations grow increased competition for food may mean the sea lions will have to make deeper, longer trips to find food. 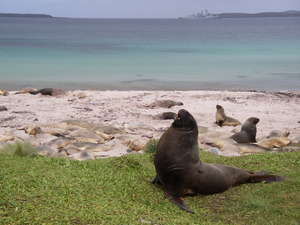 Sea lions get accidentally killed in a number of commercial trawl fisheries around subantarctic Campbell and Auckland Islands, including squid, southern blue whiting and scampi fisheries. The fishing industry use SLEDs, or sea lion excluder devices, to eject sea lions from inside the trawl nets, but there is a lack of evidence to show whether sea lions survive this process.

There is also competition between sea lions and commercial fisheries for some fish species.

Another threat to pups on Auckland and Campbell islands is accidental drowning in muddy wallows. The sea lion research team that monitors the breeding season at the Auckland Islands each year has begun to put planks into wallows, to enable pups to escape.

About a third of the sea lion pups each year are born on Campbell Island – and while this population is not so well studied, it seems it has its own share of problems, with up to half of the pups dying in the breeding colony by drowning in wallows or being crushed by large males.

The smaller populations of sea lions on Stewart Island and in Otago and Southland face a rather different suite of threats. Many of these problems are human caused: sea lions have been shot, run over by cars and trains, and harassed by dogs. As well, the small number of females are harassed by aggressive males, which can result in pups being abandoned. Jim says he would expect this problem to resolve as numbers increase and the population moves to colonial breeding, with small groups of females banding together when their pups are small.

Risk assessment – what will it take to stop sea lion numbers declining?

Once Jim had collected as much information as he could on all these different threats, he put them into population models. This allowed him to tease out what effect they might have on sea lion numbers if the threats continued as they are, compared to if they could be fixed.

The only threat which would halt the population decline if it was solved was Klebsiella. Jim says that removing any of the other problems on their own had no significant effect in stopping the decline.

In early 2015, Jim Roberts was part of a NIWA expedition to survey the diet of New Zealand sea lions in the subantarctic, with a special focus on the little-known yellow octopus, which makes up a significant part of subantarctic sea lion diet.

In this 2009 interview recorded on Enderby Island, sea lion researcher Louise Chilvers talks about the decline in sea lion numbers in the Auckland islands