More than a million birds have been counted in the last nine years of the New Zealand garden bird survey – and sparrows and silvereyes consistently top the rankings. 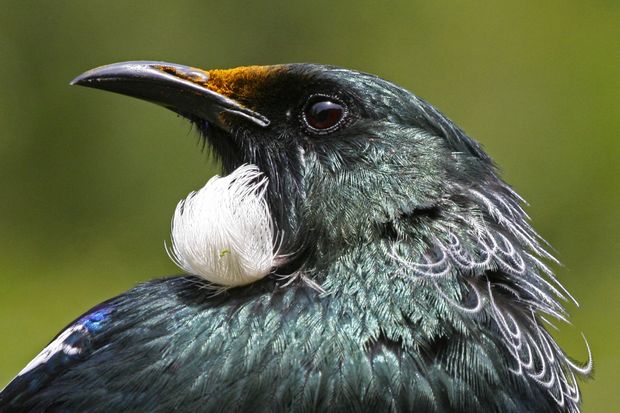 In a poll of garden bird survey participants, tui came out as people's favourite bird. It is the 5th or 6th most common bird in gardens. Photo: CC BY 2.0 Matt Binns

Sparrows first. Silvereyes second. That’s just the way it is in our gardens.

Year after year, the introduced house sparrow comes out top, as the most numerous bird in gardens throughout New Zealand.

Fighting a good second is the plucky little silvereye, a self-introduced native which arrived on these shores during the 1800s.

Two more introduced birds, the starling and blackbird, tend to come in third and fourth, and it’s not until you get to fifth or sixth place that everyone’s favourite bird, the tui, gets a look-in. 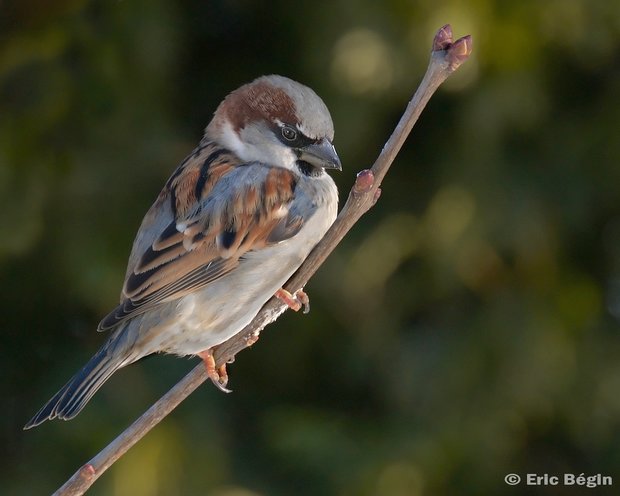 “I started it because at the time New Zealand had no measure of trends in our bird populations, especially our more common species,” says Eric.

The survey depends on thousands of volunteers who each spend an hour counting birds in their own garden over one midwinter week..

“We decided to do it in gardens so people didn’t have to leave home to participate.”

Between 3,000 and 4,000 citizen scientists take part each year, but the organisers would love to have more people out counting.

“What we’re trying to do is build a picture of birdlife across New Zealand,” says Landcare Research’s Catriona MacLeod.

Catriona is using data from the garden bird survey as part of a project to develop Trustworthy Biological Indicators. Indicator species are those whose numbers give a good idea of whether the ecosystem they live in is healthy or in trouble. 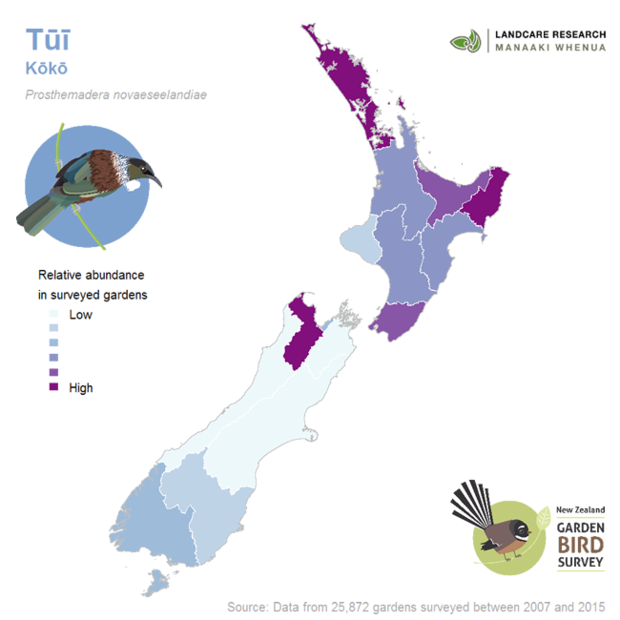 The garden bird survey team has produced maps and fact sheets for 15 different garden birds - this one shows the abundance of tui. Photo: Landcare Research

What’s the most unusual bird that’s been seen?

The rare hihi, or stitchbird. One was seen in a Wellington garden near the Zealandia Sanctuary and one was seen in Waitakere City, several kilometres from where it was released in Ark in the Park. Kaka are also recorded occasionally in the Coromandel and on Stewart Island.

Does having a bird feeder in your garden make a difference?

“It makes a huge difference,” says Eric. In gardens where people feed bread, fruit and sugar water to birds, there are two to three times as many house sparrows and silvereyes. Native fantails and grey warblers are less common in gardens with bird feeders.

Are there differences between rural and urban gardens?

What's the greatest number of birds counted in one year?

In 2015, about 138,000 birds were counted nationwide, up 38,000 on the previous year and one of the highest counts on record. Eric says harsh conditions last winter probably forced more birds to move into gardens in search of food. Over a million birds have been counted in more than 25,000 gardens in the 9 years the survey has been runnning.

You can find details of how to carry out your one-hour count and how to enter the data online on the Landcare Research web site.

The garden bird survey has an active community on Facebook.

You can find out lots more about birds at New Zealand Birds Online.

If you are a teacher, LEARNZ is carrying out a virtual field trip based around the bird survey.

This year, for the first time, the garden bird survey is collaborating with Nature Watch New Zealand, which collects natural history records and sightings.

Once the team has this year’s data they are planning a large analysis of population trends over the survey’s ten years, with those results due in early 2017. 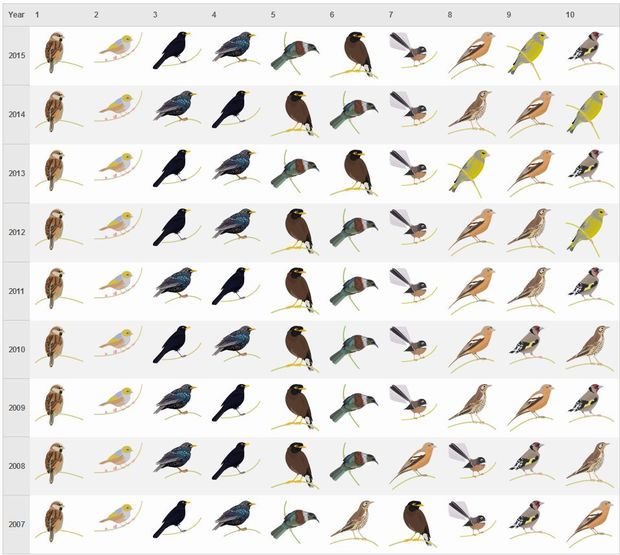 The top 10 most common birds, for the first 9 years of the garden bird survey Photo: Landcare Research