The Australian Synchrotron, the largest particle accelerator in the Southern Hemisphere, is helping scientists from all corners of the world, including more than 350 New Zealand researchers, to study everything from food technology to arts forgery, from brain function to fundamental physics, from climate change to cancer research. 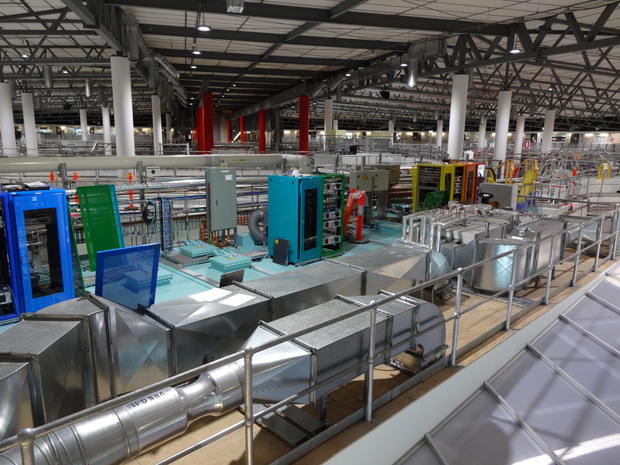 The Australian Synchrotron is the largest particle accelerator in the Southern Hemisphere. Photo: Veronika Meduna

From the outside, the synchrotron, in Melbourne's southeast, looks like a giant cake tin. Inside, however, is a giant electron microscope that produces a powerful beam of light a million times brighter than the sun.

The process begins with an electron gun. It shoots bunches of electrons at just under 99% of the speed of light into a huge ring, where they are sped up by strong magnets.

This produces a consistent, tightly focused beam of light that is deflected and harnessed towards tangents that run off the main ring. These end points, or beam lines, are where scientists probe their samples. 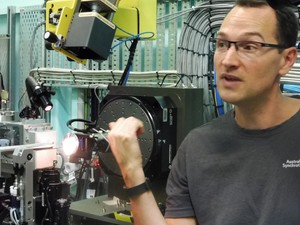 Tom Caradoc-Davies is a protein crystallographer who uses one of the synchrotron beams to describe the exact structure of molecules. Photo: Lauren Hernandez

Kiwi scientist Tom Caradoc-Davies is using one such end point that produces X-rays to decipher the 3D structure of proteins in a quest to improve the efficacy of cancer drugs. He left New Zealand a decade ago to work at the synchrotron.

For a protein crystallographer it is like going to the Olympics. Tom Caradoc Davies

“My job is like being a scientific midwife. We have all these projects that are pregnant with promise. It takes years or decades for people to understand the cell biology to get proteins to grow crystals, and then they come to us to look at the structure … and it’s a very exciting step in the process, we’re the last stop before you get the Eureka moment.”

Proteins are the molecular machines of life, essential in all physiological processes, including disease. But they are tiny, smaller than the wavelengths of visible light, and can’t be investigated under a microscope. 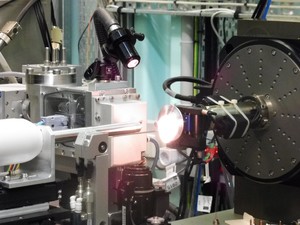 As electrons fly around the synchrotron ring at almost the speed of light, they are deflected by magnets and exit at beam lights, where scientists use the light source to probe their samples. Photo: Lauren Hernandez

Dr Caradoc-Davies uses the synchrotron’s X-ray beam to analyse the precise structure of protein crystals. In a recent example, his team’s focus was on a protein known as BCL-2, which is present in many cancers. Thousands of cells become cancerous, but their out-of-control growth usually triggers a process known as apoptosis, or programed cell death. It is only if this process is broken that a cancerous cell can continue to proliferate and grow into a tumour.

BCL-2 plays an important role in cells where this programmed cell suicide no longer works, and medical researchers have developed a drug that targets this protein. But Dr Caradoc-Davies says the drug also interacts with a very similar protein, which leads to dangerous side effects and meant that it couldn’t be used. It was only once the team determined the precise 3D structure of both proteins that a new drug could be developed, which has since undergone clinical trials on patients with chronic lymphocytic leukaemia.

More than 350 New Zealand scientists are using the Australian synchrotron, and the New Zealand government, alongside the New Zealand research sector, has allocated AU$4.5 million to support the facility and to secure preferential access for Kiwi scientists. They work on many research projects, including the following examples:

Researchers from Waitako University are turning dried bloodmeal from red meat processing into a compostable plastic that breaks down without harmful byproducts. The new plastic, called Novatein, is an alternative to petrochemical-based plastics, and will be used in products such as pots, trays, containers and clips used in the horticultural industry. The researchers used the Australian Synchrotron to demonstrate the strength of the moulded plastic, and will again use it to help fine-tune their processes to develop a clear and extrudable product appropriate for thin-film plastics.

Researchers from AgResearch and the University of Auckland found a new way in which bacteria store and release toxins, and their discovery may be harnessed to develop new bioinsecticides for crop pests and even new medicines. The team studied how the bacterium Yersinia entomophaga kills crop pests including grubs, moths and caterpillars; they discovered, in the process, a new way in which the bacterium packages its insect-killing toxin in a hollow protein shell.

Researchers from the MacDiarmid Institute for Advanced Materials and Nanotechnology and Callaghan Innovation used the Australian Synchrotron to understand corrosion within oil and gas pipelines. The observations interpret the pace and structure of the earliest phases of corrosion in unprecedented detail.

Massey university scientists are using the synchrotron to make sheep skin leather as strong as cowhide so that it can be used by the footwear industry. The team uses an X-ray scattering beam line to investigate the nanoscale basis for the difference in strength between cow and sheep leather and to relate this to how easily the leather can tear.

Veronika Meduna visited Australia as part of an international science media delegation looking at research and innovation, hosted by the Australian Government's Department of Foreign Affairs and Trade.