Kate Obermeyer grew up thinking that the world sounded the same to everybody around her.

It wasn’t until she was 11 that her hearing loss was discovered during a routine primary school check. She was fitted with hearing aids and presented with a devastating prognosis that she would be deaf by the time she was 40.

As it was, she was severely deaf by the age of 18, but she struggled on, learned to lip read, and went to university in pursuit of her dream to become a journalist. “I thought I can do this, I’m sure I can be a deaf journalist. But it proved too difficult.”

By 21, she considered suicide because she felt she was a burden on the world and could no longer see a future. Lip reading, sign language and support from the deaf community saw her through but when she started to think about having children, fear set in again. The fear of not being able to hear her children. The fear of needing them to hear for her.

Then she saw a women who she knew had the same hearing loss as herself speaking on the phone.

Not long after that, Kate underwent surgery to have a cochlear implant and spent seven months re-learning to hear and to make sense of the “electronic beeps and clicks merged together in a chorus”. She picked up the phone and called for mum for the first time in years. 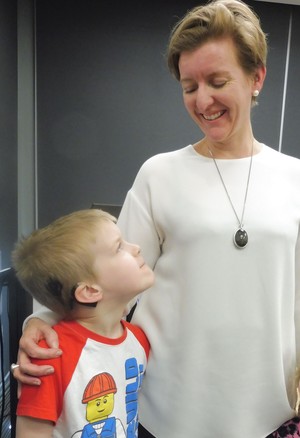 Seven-year-old Charles, pictured with his mum Belinda, has two cochlear implants which have restored his ability to hear to the point that he can play music and learn Chinese. Photo: Lauren Hernandez

I met Kate during a visit to Australia which included a tour of the Sydney headquarters of Cochlear, a medical company that develops and manufactures cochlear implants, or bionic ears. She now works as an advocate for people with hearing loss who may benefit from the technology - people like seven-year-old Charles whose two implants have restored his hearing to the point that he can play music and learn tonal languages such as Chinese.

In New Zealand, one to three children in every 1000 are born with permanent hearing loss. For about 10 percent of them, the hearing loss is severe or profound.

Neil Heslop, the general manager of the Southern Cochlear Implant Programme, says children with hearing loss that cannot be ameliorated with hearing aids benefit greatly if they receive cochlear implants as soon as possible, as young as nine months. “Often by the time they get to school age, they do as well as their normally-hearing peers.” 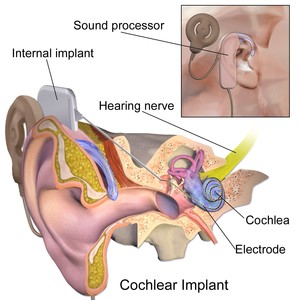 A cochlear implant works differently from a hearing aid. Hearing aids amplify sound transmission through the inner ear, while a bionic ear turns sound into tiny electrical pulses that are sent directly to the hearing nerve.

Neil Heslop says the Ministry of Health is now funding bilateral cochlear implants for children to improve outcomes because the “brain is wired to process sound and speech through two inputs”.

He says the funding for children is sufficient to provide implants for all those who need them, but of the 120 adults who are referred to the trust by hearing specialists each year, only 20 undergo the surgery required to have the device implanted.

Veronika Meduna visited Australia as part of an international science media delegation looking at research and innovation, hosted by the Australian Government's Department of Foreign Affairs and Trade.