It could be a fully automatic skin making machine

University of Auckland scientists should soon be able to grow new skin, faster and tougher than ever before. It could revolutionise ways of treating burn victims and boost their chances of survival. 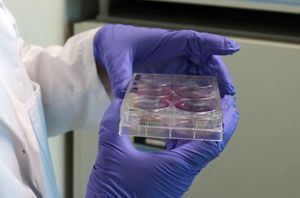 University of Auckland scientists have developed a revolutionary way to grow skin in the lab. Photo: RNZ / David Steemson

The new technique is the brainchild of Dr Vaughan Feisst and Professor Rod Dunbar at the University of Auckland’s School of Biological Sciences. After seven years work they will soon be ready to start clinical trials.

When David Steemson visited the pair in the lab, Vaughan let him look into the incubator machine, where donated skin was being broken down as the first step of creating new skin.

The separated cells are placed on a newly developed synthetic substrate, and after being fed the right kind of food, those cells start reproducing.

Scientists have made skin before, but the Auckland researchers have developed a way to grow more than just one layer of skin, just like the real thing. That makes the finished product a whole lot stronger than previous fragile iterations.

Skin is the body’s biggest organ. Each human carries around about four kilograms of it.

Rod says that in severe burn cases the body effectively leaks, and it has to be sealed off if the patient is to be saved. At present, if the patient does not have enough of their own skin for grafts, the surgeon can use donated skin from deceased donors.

But he says rejection kicks in rapidly, once the immune system realises the skin is from somebody else. The donor skin then has to be scraped off in a series of operations that have been likened to medieval torture. With luck, more skin from the patient’s own body can then be grafted.

All this could change though, if the Auckland scientists’ techniques to produce a lot of new skin from a tiny number of the patient’s skin cells goes into commercial use.

“Now we want to develop a manufacturing system that’s so simple to use we could put into any lab in the world,” says Rod. “It could be in a burns unit at a disaster site or in a war situation. The easier we make it the more likely it is for the technology to be picked up.”

Vaughan says other scientists have tried to grow new skin on a substrate made from animal product but he says that means there’s a danger of disease or rejection.

“We’ve found a synthetic substrate that we can make lots of, and is easy to manipulate if we change the properties of the skin”.

It is special material that will dissolve once the new skin is put in place. It’s the same product used in dissolvable sutures.

Rod says his team has come up with a dozen innovations to get the new product to work. The techniques are being kept under wraps, while the University applies for world patents. That could be achieved by the end of the year.

“It could be a fully automatic skin-making machine,” says Vaughan. “This is my baby. I’ve been working on it so long.”