Parrots and crows are the brains of the bird world and New Zealand’s feisty mountain parrot, the kea, regularly excels at intelligence tests. But what about its forest cousin, the kaka? Is it just as smart, and what are its problem-solving abilities? 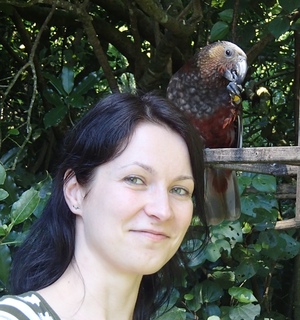 Julia Loepelt with a kaka; more than 100 wild kaka at Zealandia took part in her study. Photo: RNZ / Alison Ballance

To find out, Julia Loepelt, a PhD student studying the cognitive development of kaka at Victoria University of Wellington, enlisted more than a hundred willing volunteers – wild kaka, aged from 4 months to 13 years, that willingly took part in her experiments in return for a few cashew nuts.

And what she found was that young kaka are innovative and persistent problem solvers – whereas older birds are so set in their ways that they failed to solve several of the experiments. It turns out you can’t teach an old parrot new tricks, after all.

Julia suggests that this greater behavioural flexibility in young birds helps them develop efficient ways of feeding that they then use for the rest of their lives. 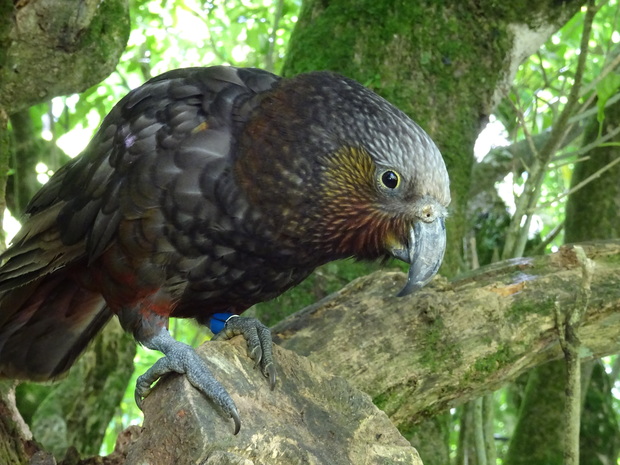 The kaka reside in Zealandia Sanctuary in Wellington, and as well as foraging for themselves in the bush they regularly visit feeding stations to top up on parrot pellets.

The feeders have a lid that is raised when a kaka stands on a treadle plate, and Julia decided to use these feeding stations as the basis for two out of three experiments.

Of the 104 birds she tested, 24 took part in all three experiments – and only 5 juvenile birds successfully solved all three.

In the block removal experiment the kaka had to recognise that a block of wood under the treadle plate was preventing the lid of the feeder from lifting. Photo: Julia Loepelt / Victoria University of Wellington

Julia placed a block of wood under the treadle of the feeding station, which prevented the lid from rising when a parrot stood on it. To get at the tasty cashews, a kaka needed to work out that if it pushed the block of wood out of the way the feeder would work as usual.

None of the adult kaka could solve this problem. They persisted in trying to push up the lid as they normally would, and didn’t draw a connection between the block and their problem.

The juvenile kaka were much better problem-solvers - more than 40 per cent of them worked out how to get rid of the block and access the cashews. 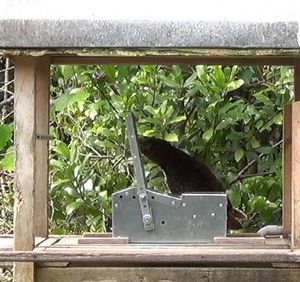 A kaka successfully opening the feeder when the treadle plate has been removed. Photo: Julia Loepelt / Victoria University of Wellington

This problem turned out to have the lowest success rate of the three experiments.

Julia removed the treadle plate that normally raised the feeder lid. The kaka had to work out that they needed to go around to the side and flip the lid from there.

More than half of the juvenile birds solved this problem, and one adult managed to succeed as well. 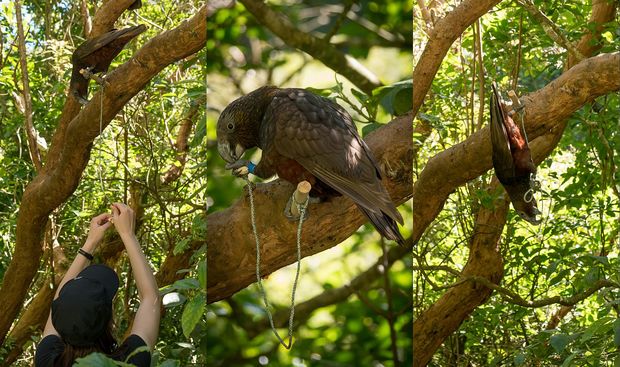 In the string pulling experiment the kaka have to get at a cashew nut suspended on a long piece of string. There were a number of ways of solving this problem, including hanging upside down. Photo: Judi Miller / Zealandia

This was a novel experiment that wasn’t based on the feeder. It involved a cashew tied to a length of string, suspended from a branch. The kaka had to work out that it needed to pull up the string.

This experiment had the highest success rate – all of the juveniles solved it, and more than half of the adults did as well.

The kaka were very inventive in how they solved this problem, and Julia counted eight successful techniques.

To find out more

The paper “Can you teach an old parrot new tricks? Cognitive development in wild kaka” by Julia Loeplet et al was published in the Proceedings of the Royal Society B (2016).

The kaka at Zealandia have also appeared in stories on Urban kaka and The dark side of being an urban parrot – kaka and lead.