The virus hunter and the rare plant

Some rare New Zealand plants are looking poorly – to find out what’s ailing them, DOC ranger Graeme Loh has called in ‘virus hunter’ Paul Guy, from the University of Otago’s Botany Department. 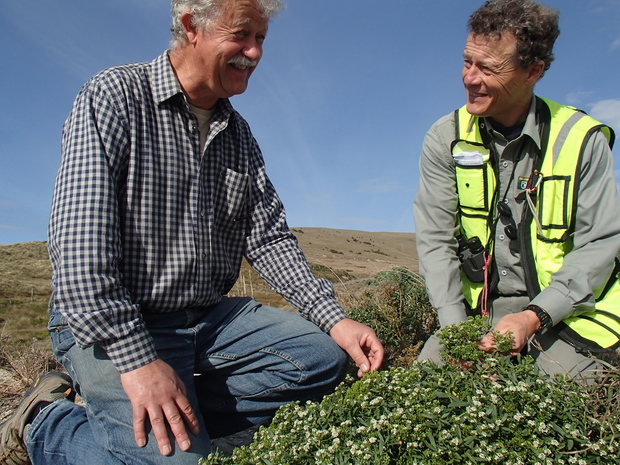 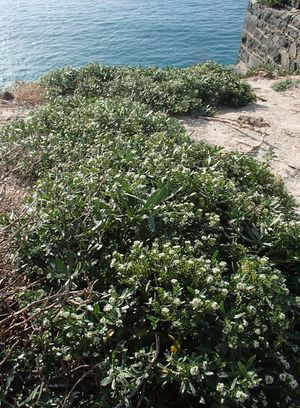 The plants in question are native coastal cresses in the genus Lepidium. They’re commonly known as Cook’s scurvy grass, although Graeme points out that this name is rather misleading as they aren’t a grass at all. Rather they are a member of the cabbage family.

The thick-leaved scurvy grass, Lepidium crassum, only occurs at a few sites in Otago, and it is thriving at Taiaroa Head, at the top of Otago Peninsula, due to a growing colony of red-billed gulls which breed there in summer. The ground they leave behind is soft, clear of plants and rich in guano, an ideal situation for the Lepidium.

Graeme says the plant is surprisingly hardy in many ways, including its ability to cope with strong salt-laden winds and even waves.

“One of the plant kingdom’s thrill seekers” is how Paul admiringly describes it. “If things are tough it really likes to get going.”

But Graeme adds that they also “die quite easily”, which is where Paul comes in. He has discovered the plants are infected by three different plant viruses. And although some plants in the wild seem to be resistant to the viruses, seedlings grown in greenhouse trials were “killed stone dead” by one of the viruses.

“[The viruses] probably came in[to the country] with our introduced brassicas. They are the cauliflower mosaic virus, turnip mosaic and turnip yellows,” says Paul.

“They also came with aphid vectors – the aphids act like flying hypodermic syringes and inject the viruses into all sorts of brassicas.” 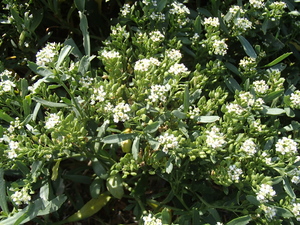 The rare cress Lepidium is a member of teh cabbage family and resembles the familiar garden flower sweet alyssum. Photo: RNZ / Alison Ballance

Paul says they are looking for patterns of infection in different cress populations, and they have a suspicion that brassica weeds such as forage brassica may be acting as reservoirs for the virus and for the aphids.

To confirm whether or not plants are infected with a virus Paul takes samples back to the lab for a quick diagnostic test.

“I’m hoping that if we just do basic good plant husbandry and get rid of some of these brassica weeds that we might be able to reduce the problem,” says Paul.

Paul has also discovered small insects called thrips living on the cresses, and he says he needs to expand his investigation to include thrip-transmitted viruses.

Viruses are not the only problem facing the coastal cresses – they are also vulnerable to cabbage white butterflies, competition from other more vigorous plants and browsing by animals such as rabbits.

There are about 1000 known plant viruses, and Paul says they have an impact on production crops in New Zealand as well as ornamental garden plants and native plants.

Despite biosecurity precautions, more introduced plant viruses are being discovered in New Zealand, and meanwhile improved molecular techniques are also leading to the discovery of new species.

Paul says plant viruses have probably been around for tens of millions of years and they seem to evolve and diversify with their hosts, rather than mutating rapidly like the influenza virus.

Paul sees genetic engineering as a tool that can be used to introduce genes into plants to create resistance to viruses, and he gives the example of how a gene that was resistant against the papaya ringspot virus rescued the papaya industry in Hawaii.