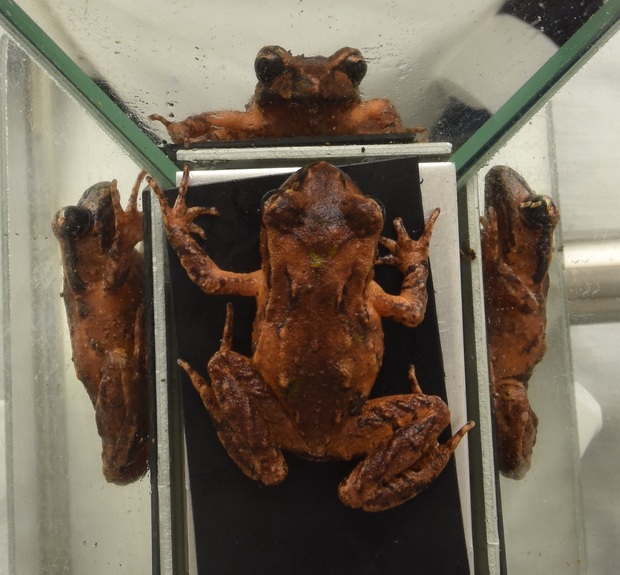 This frog is having an ID photo taken on a mirror stage, which shows its flanks and face as well as its back. This particular frog was first photographed in 1990 and is at least 33 years old. Photo: Ben Bell / Victoria University of Wellington

New Zealand has the dubious honour of being home to the world’s most "evolutionarily distinct and globally endangered" amphibian species. The Zoological Society of London has collated what they call their EDGE list for different groups of animals, and number one on their list of amphibians is a tiny New Zealand native frog.

Archey’s frog is found only in the Coromandel and at one site in the King Country, and it is the smallest of our four ancient native frogs.

These are frogs like no other – they’re forest frogs, that have no external ears, no croak and no tadpoles. The baby froglets climb onto their dad’s back and he looks after them until they’re big enough to be independent. 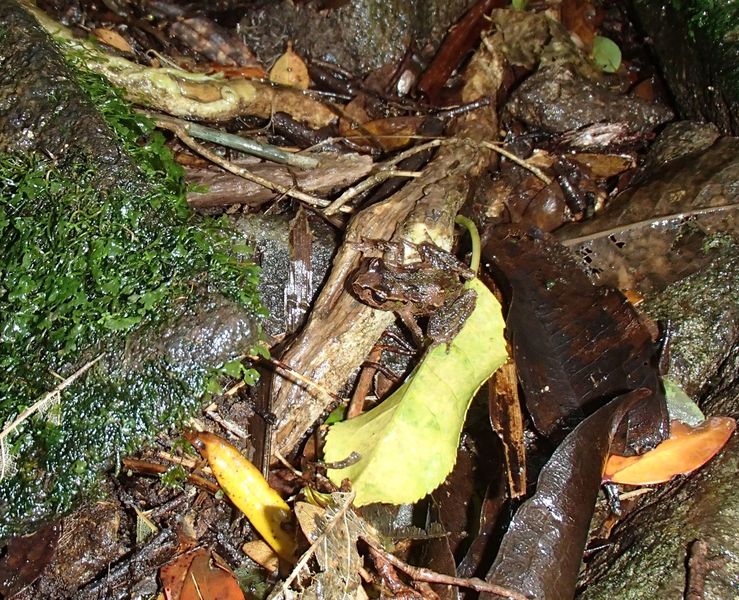 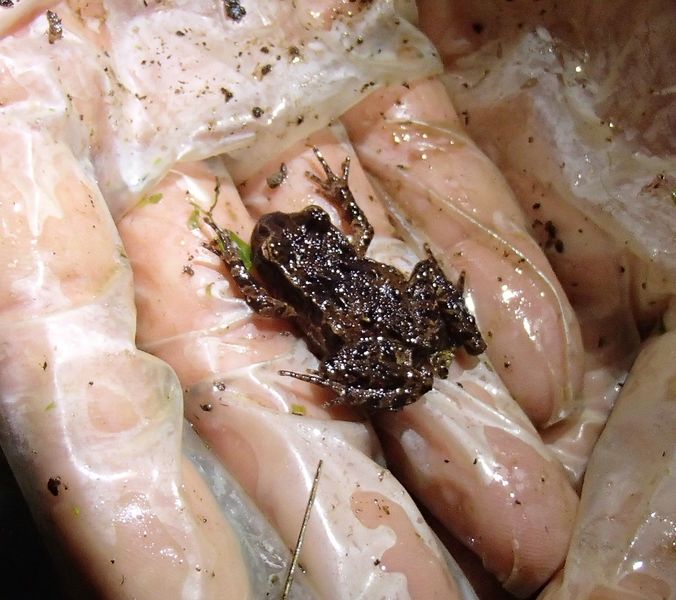 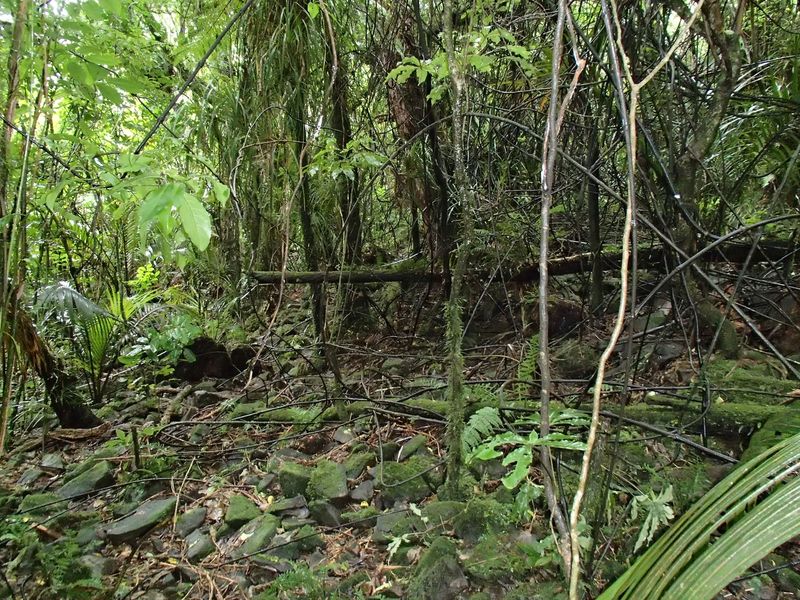 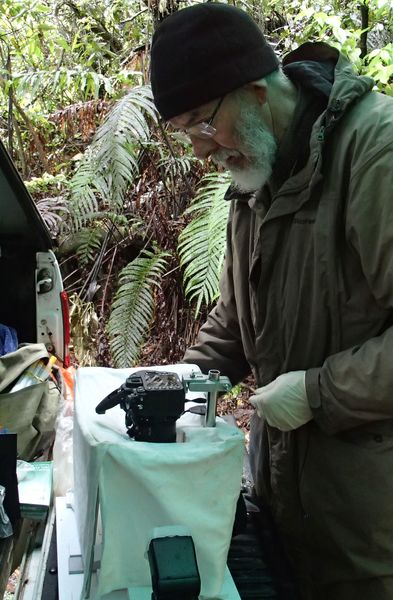 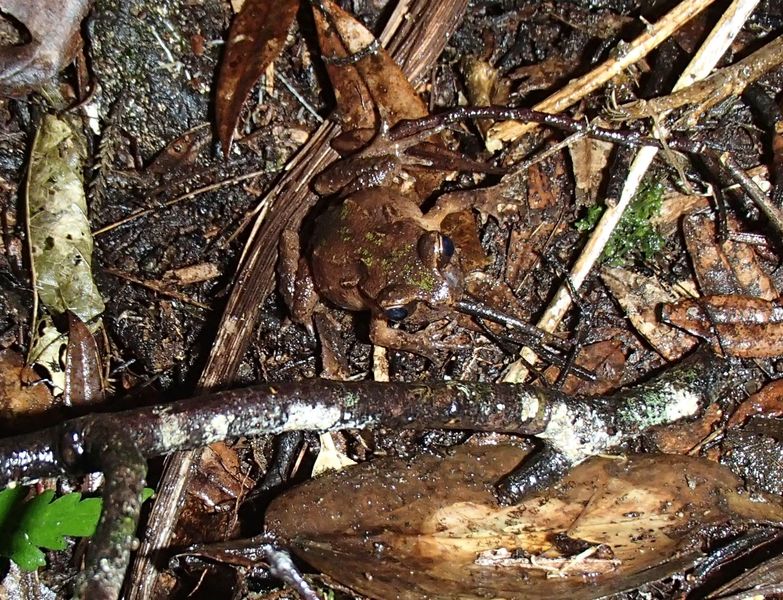 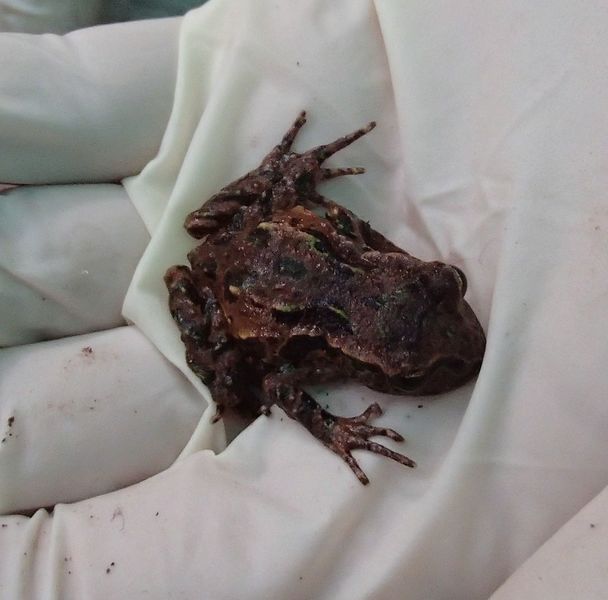 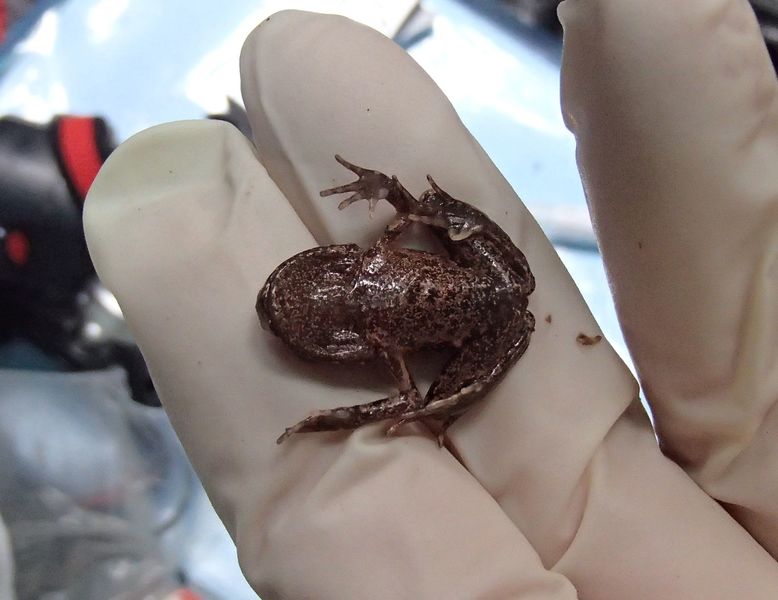 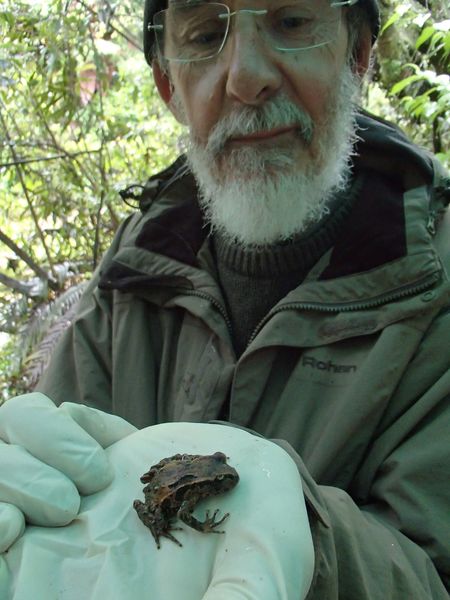 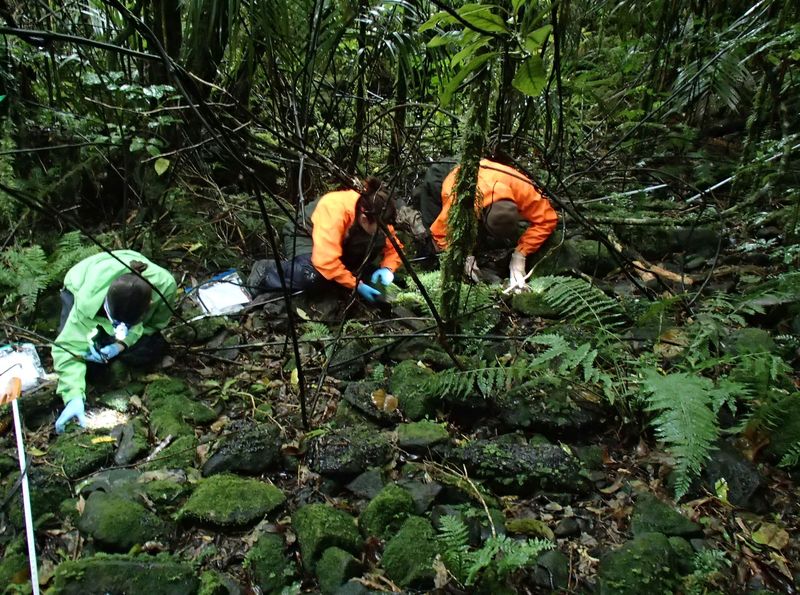 Searching for frogs under rocks in the forest photo Alison Ballance 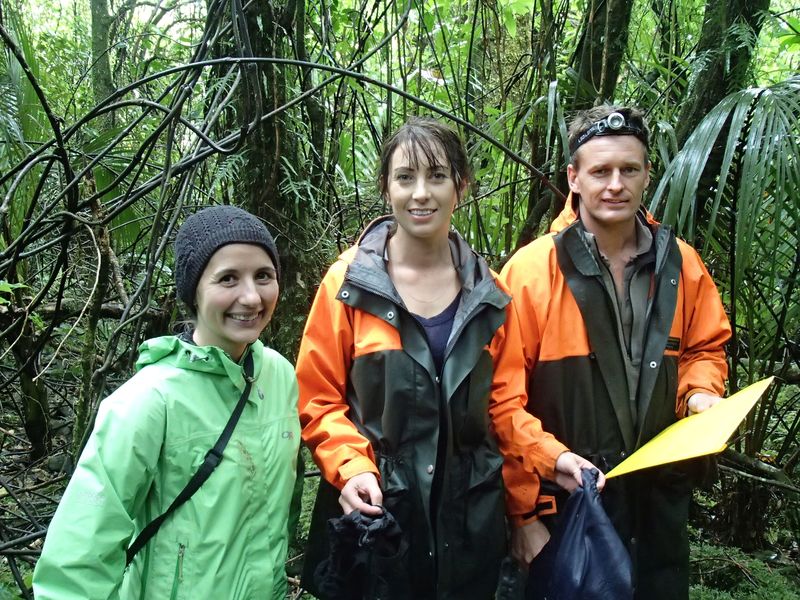 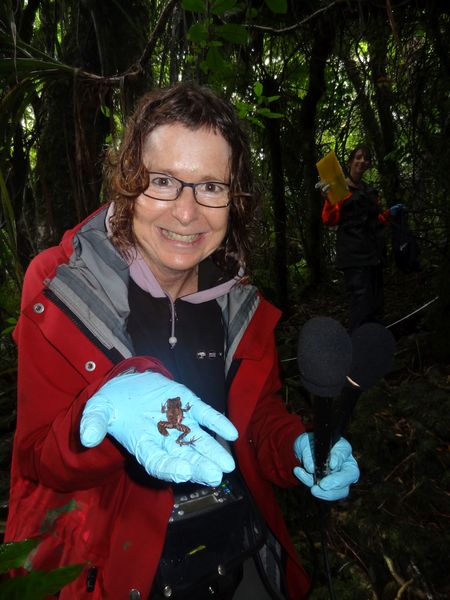 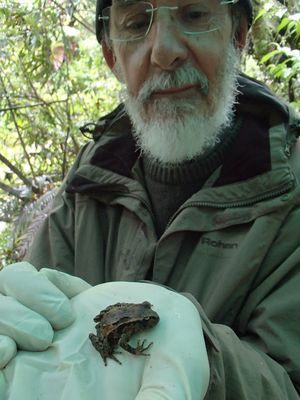 Biologist Ben Bell has been fascinated with the little Leiopelma frogs since he began working at Victoria University of Wellington in the 1970s, and in 1982 he began an annual count of frogs living in a 10 by 10-metre quadrat at an undisclosed site on the Coromandel Peninsula.

The small frogs live under rocks on the forest floor, and the process to count them is simple albeit a little tedious. People crawl across the quadrat on their hands and knees lifting every rock and collecting every frog they find.

Ben uses natural colour patterns and markings to recognise individual animals, and between 1982 and 2016 he has identified 769 individual Archey’s frogs in this small patch of forest. 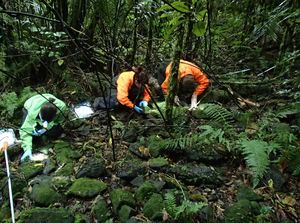 Ben says the most significant finding from the study has been to identify when the introduced chytrid fungus arrived in the population, causing its numbers to crash. This was in 1996, and to begin with it was not clear what had caused the population to drop from more than 700 animals to less than 100. Then, in 2001, the first case of chytrid fungus in an Archey’s frog was confirmed at Mount Moehau, following on from an earlier detection in an introduced Australian frog in the South Island.

“The pathogenic chytrid fungus was probably the significant factor behind the population crash we saw in 1996, when frog numbers declined by 88 percent,” says Ben. 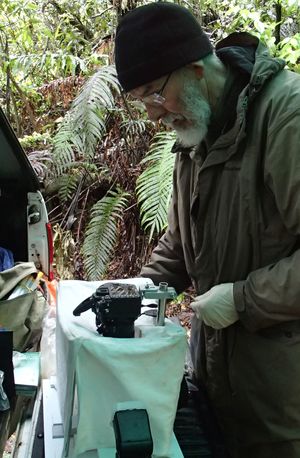 Chytrid fungus is a significant problem for amphibians worldwide. It has caused numerous population crashes and even species extinctions, but the news is not always as grim as it might have first seemed.

Since 1996, the Archey’s frog population has stabilised and even grown a little, now numbering between 100 and 150. Chytrid fungus still exists in the population, but most of the surviving population seem to have developed an immunity. While successful breeding continues the number of young frogs that survive each year is much reduced.

“Before the population crash I used to find as many as five frogs under a single rock. Today most of the rocks we lift have no frogs.”

One of the unexpected consequences, says Ben, has been an increase in the size of the remaining frogs. He thinks there is less competition and more food available to the survivors.

Chytrid fungus has not been detected in the three other native frog species, including the slightly larger and more aquatic Hochstetter’s frog, which lives alongside Archey’s frog on the Coromandel Peninsula.

Chytrid fungus probably arrived in New Zealand on an introduced amphibian, possibly the clawed African frog that used to be used in pregnancy testing, 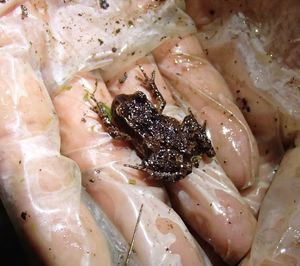 An Archey's frog - the searchers wear gloves and change them between frogs to prevent transmitting the chytrid fungus Photo: RNZ / Alison Ballance

New Zealand’s native Leiopelma frogs are remarkably long-lived, even though they only grow to between 31-37 millimetres long.

During his 2016 count Ben and his willing team of frog fans found 14 Archey’s frogs, and three of these were oldies that Ben says “substantially advanced the known longevity of the species: one was 30 years old, one at least 33 years old, and another about 35 years old.”

That last frog is as old as the study, and since Ben reports that he knows of a Maud Island frog that is at least 43 years old, it’s clear that this is not yet the last word in how long Archey’s frogs live for.

As well as the four native species of frogs, New Zealand is home to three introduced species. Jen Germano from the Department of Conservation says it is a simple matter to tell them apart.

“If you hear a frog calling then it’s Australian, because the New Zealand frogs are actually completely silent.”

The New Zealand frogs don’t have external eardrums, while the Australian species do.