Nematodes from the deep

9,000 metres down the Kermadec Trench it is dark, cold and subject to bone-crushing pressure – but scientists have discovered that the ocean floor is teeming with life. 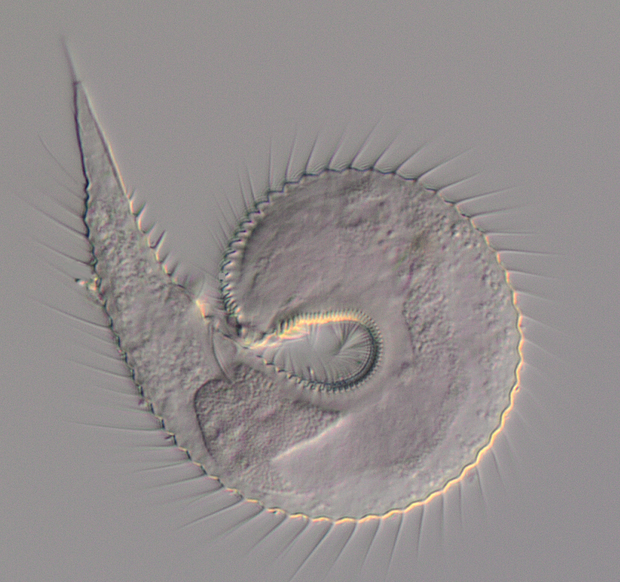 This tiny nematode worm from deep in the Kermadec Trench is a male Greeffiella. Photo: Daniel Leduc / NIWA

Some of the deepest parts of the world’s oceans lie just to the north-east of New Zealand. The bottom of the Kermadec Trench is more than 9,000 metres below sea level, while the neighbouring Tonga Trench plunges to more than 10,000 metres and is the second deepest place on earth.

NIWA scientist Daniel Leduc tells Alison Ballance that he has discovered over 100 species of tiny nematode worms, as well as surprising amounts of pine pollen, living in sediment there.

Daniel’s area of interest is nematodes – very small worms – that live in soil and in ocean sediments.

On his return Daniel had four sediment samples to sort through, collected at depths of 4,000 to 9,000 metres. He also had some sediment collected from more than 10,000 metres depth on the Tonga Trench, which carries on from the Kermadec Trench. 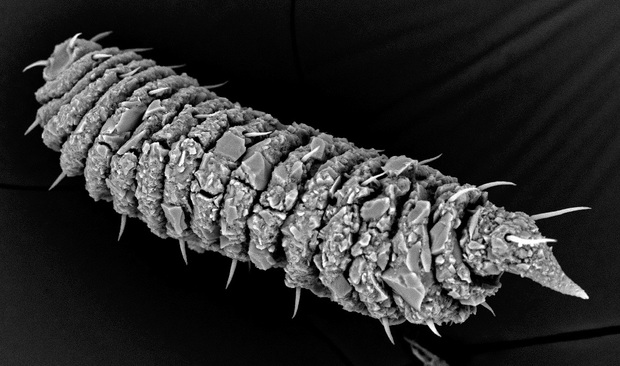 “Because it takes a long time to put a name to all the species, and most of the species down there will be new to science, I just looked at what we call morphological species, and basically I was able to find over a hundred species [of nematodes]” - NIWA scientist Daniel Leduc.

And it wasn’t just the number of species that impressed him – the abundance of nematodes was also unexpectedly high, especially at depths of 7,000 to 8,000 metres. Daniel says there were several hundred thousand individual nematodes per square metre, which he says is comparable to densities in Wellington harbour sediments. He says this is “quite respectable for such a deep environment”.

Daniel says the density of nematodes was probably greater at 7,000 - 8,000 metres than it was at 6,000 or 9,000 metres, because of the shape of the trench. The trench acts as a funnel, concentrating organic matter drifting down from the sea surface, and also, in some cases, from land.

The most intriguing and common bits of land-based organic material were grains of pine pollen that Daniel says come from Pinus radiata. Pine pollen is light and able to float and drift long distances.

Curiously, Daniel even found a gromiid, a simple one-celled organism, that had consumed a grain of pine pollen.

Daniel says the gromiid came from the bottom of Horizon Deep, in the Tonga Trench, at a depth of more than 10,000 metres, and more than 3,000 kilometres from New Zealand, the probable source of the pollen. 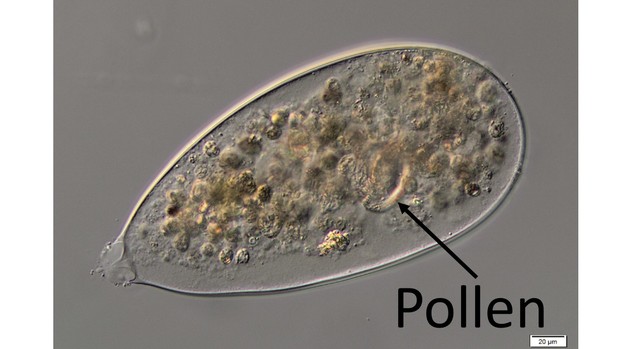 This one-celled organism was living in sediment at the bottom of Horizon Deep in the Tonga Trench, the second deepest place on earth. It is called a gromiid, and its 'gut' is full of sediments - and a pine pollen grain. Photo: Daniel Leduc / NIWA

“It was quite striking when I saw this, as it meant the Pinus radiata pollen had been blown by wind all the way from the central North Island and travelled with the currents all the way down into the trench to finally be eaten by one of these little gromiids.”

Daniel presented his findings at the second Kermadec science symposium in Wellington in early April. He has been on Our Changing World previously, talking about the discovery of a new nematode species in Wellington Harbour.