Points, lines and polygons - the art of making maps

Maps tell the story of our ever-changing Earth.

The length and breadth of New Zealand is charted, at a scale of 1:50,000, across 451 topographic maps produced with technical skill, art and patience by a team of map makers at Land Information New Zealand.

The map makers are witness to several stories unfolding in the country.

The most dramatic is the impact of Christchurch earthquakes. The strong black block that was the city’s CBD has been shattered into a mosaic, while the red zone is a ghostly snake of deserted roads that echo the shape of the Avon River.

Meanwhile, in the countryside humans are changing the landscape as farming evolves with market demands and new practices.

Mapping the land begins in the sky

Chris Kinzett, technical advisor at LINZ, has been involved in map making for almost 50 years. In that time he has seen a radical change in map production as digital tools have replaced manual tools. But, he says, the fundamental basis of any topographic map – an aerial image – hasn’t changed at all.

“Aerial photography has always been a key component in map production,” says Chris. “It’s the medium you use to extract the information that ultimately finds its way to a map.”

Aerial photography began in 1936 and, since 2000, satellite images have become increasingly important as well. Chris says their advantage is that they can be captured at any time of the year, whereas aerial photography flights only happen in summer.

“The data is then passed on to a cartographer, and it is the cartographer ... that takes the data, symbolises it, adds the colours and ‘makes it pretty’.”

The basic scale of a topographic map is 1:50,000, although Chris says they capture data accurate to 2-3 metres. These days they make the basic data, as well as the maps, freely available to other users.

Chris says that compared to the early days of map-making, the use of digital tools has allowed maps to be more accurate and more current. 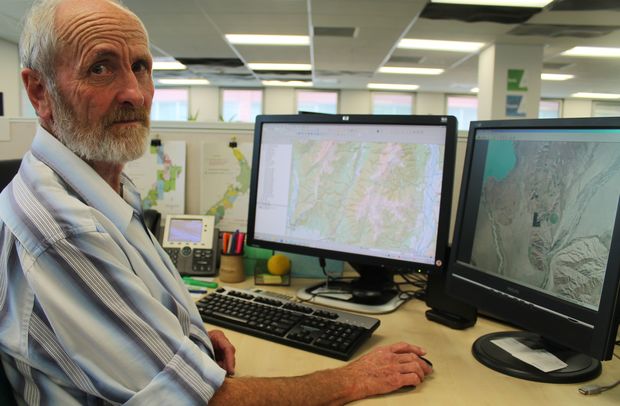 One of the biggest changes Chris has seen recently has been the appearance of large green circles, in places like the Mackenzie basin (one is visible in the centre of the right-hand computer screen above). These are created by centre-pivot irrigators, and Chris says they will be added to maps if they are significant features in a landscape.

“That’s half the skill,” he says. “How can you build up the map and give a good representation of what the land looks like without cluttering or under-doing it?”

Chris used to tramp and is a keen map user, and he says this experience has been invaluable.

“If you have an understanding of why people use a map it makes it a lot easier to hopefully give them the right information on that map.”

From points to polygons

“A topographic map is a graphical representation of a given place at a given point in time,” says Richard Freeman, LINZ cartographer. “And we use lines, points and polygons to simplify those objects on the aerial photograph.

A point represents something small and discrete, such as a building.

A line indicates a linear feature such as a road or track, while a polygon – a variable shape filled with different symbols or textures – delineates different areas of vegetation, for example.

As the topo maps already exist, the modern cartographer’s job is to keep them up-to-date.

Richard says this involves working directly onto an aerial photo, with the existing data alongside so he can see any features that need updating. The graphics software he uses allows him to uplift and realign anything that has moved or changed.

Satellite image of the Marlborough Sounds (left) and how that is represented on a map (right). Photo: Land Information New Zealand

Richard says that what maps do is “tell the story of the changing earth.”

One of the things that changes most frequently is vegetation, for example as pine plantations are felled and shelter belts removed.

Richard says that the intensification of dairying over the last 5-10 yeas has significantly changed the agricultural landscape in areas such as Southland.

“You do get an appreciation for how diverse New Zealand is – and how quickly it changes.” 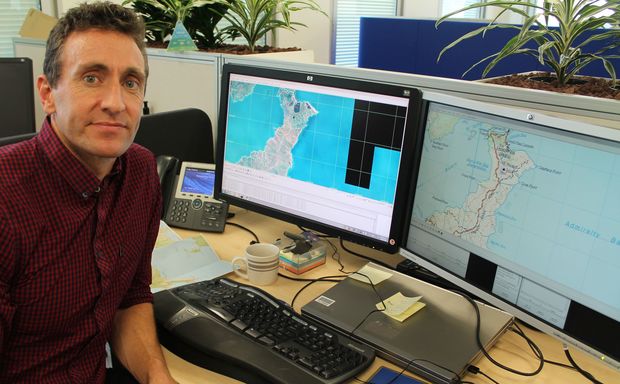 When the Canterbury earthquakes changed the face of Christchurch forever it created an unprecedented challenge for New Zealand cartographers – how to capture those changes with the limited palette of colours and symbols they have for urban areas.

“It was the first time that a natural disaster impacted one map,” says cartographer Graeme Jupp, “to the point where we had to carefully evaluate how we were to represent the changes wrought on the Christchurch CBD and the urban areas that had been affected by liquefaction.”

The central business district (CBD) went from a large core of city centre blocks that were marked in sold black to a scatter of black squares that represent the few remaining buildings.

In red-zoned residential areas such as Dallington, Burwood, and Bexley, where almost all the houses have been demolished, the grey shading that represents blocks of houses has turned to a scatter of black dots representing the few remaining dwellings.

On a 1:50,000 topo map major urban roads are marked in orange; in the red-zone the closed-off roads are still visible but on the map they have been reduced to a ghostly white. 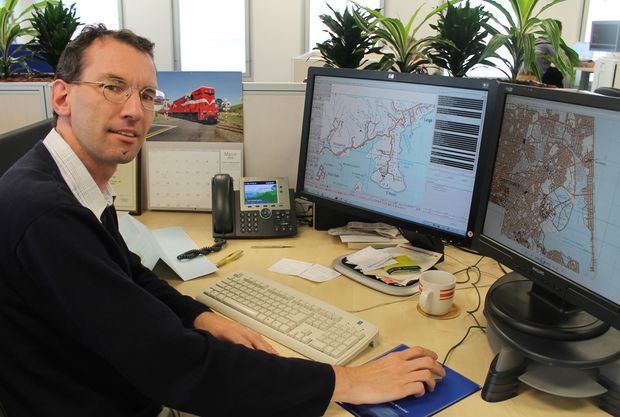 Maps are a key record of changing names, as well as a changing land.

“There are 51,000 geographic place names in New Zealand, and when we initially made the 1:50,000 topo map series all of those had to be placed by hand, by a team of five to six of us,” says Graeme.

“Every time we make a new map sheet we have to go back and re-evaluate the position of the geographic names.”

“Geographic names can be quite challenging. Any names that come out of, for example, treaty claim settlements – there might be new names or dual names – they are put into the database. And sometimes the length of the name can be a challenge to the cartographers, in terms of positioning it relative to the feature to which it refers.” 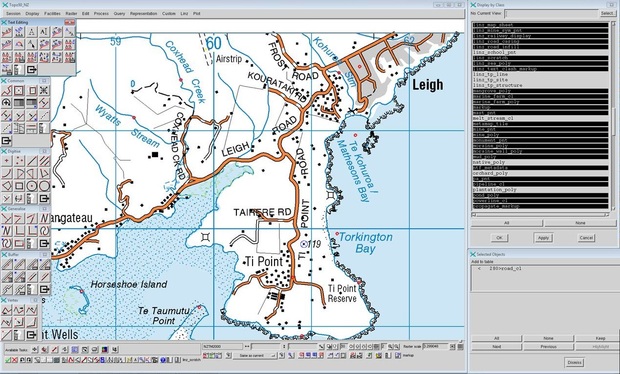 Geographic names around the town of Leigh include roads, streams, an airstrip and a dual name. Cultural features are in upright text and natural features in italics. Photo: Land Information New Zealand

The culmination of the map-making team’s work is the creation of a paper or digital map. And technical lead Fran McNamara says that digital technology and a pre-press computer have made this part of the job much simpler and faster.

“All this used to take between two to three months work by a cartographer,” she says. “It happens now in about 10 minutes.”

While the work flow of making a map has changed as much as the land itself over the past 50 years, Fran says the resulting maps are still as practical and as beautiful as ever.

“Our main goal was that people wouldn’t be able to tell the difference as to whether this had been drawn by a cartographer using their skills, or whether it was done entirely digitally.” 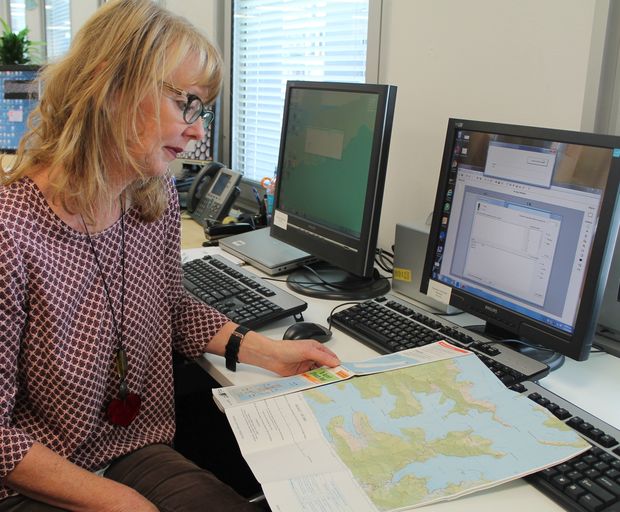 Fran McNamara looking at a completed paper topo map, seated at the pre-press computer where the maps are finished and sent to be printed. Photo: RNZ / Alison Ballance

Digital versions of all 451 of New Zealand’s 1:50,000 topographic maps can be downloaded for free from LINZ. You can still buy paper topo maps as well.

If you are interested in maps, you might like to check out a major exhibition on at the National Library, Wellington. ‘Unfolding the Map’ explores the history and the future of cartography in New Zealand.

Also in Wellington, Victoria University of Wellington and the National Library are partnering  in a series of map-related talks, on how mapping can be applied to the study of people, geography, the weather, and even literary works.

All talks are at the National Library and you can find more information on their website.