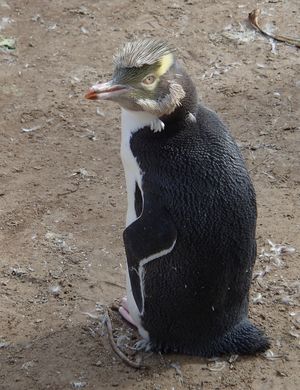 “They’re not doing great at the moment.”

Over the past 25 years a concerted conservation effort on land had seen yellow-eyed penguin numbers in the South Island climb from just 140-or-so pairs to more than 500. But four years ago the penguin’s numbers began to crash, and this breeding season there were just 206 nests in Otago and the Catlins, and about 240 chicks successfully fledged.

“They're not doing great at the moment," says Trudi. "We’ve had issues with avian diphtheria, there was a mass mortality of adults one year which is an unexplained potential toxin event … and there have been supposed barracouta attacks as well.” 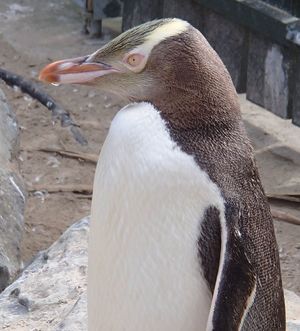 No surprise where yellow-eyed penguins get their name. Photo: RNZ / Alison Ballance

Conservation efforts on land have focused on replanting trees and shrubs to provide safe nesting areas, and predator-trapping to prevent deaths caused by ferrets and stoats.

Now it seems many of the problems plaguing the penguins are coming from the sea – and Trudi has been tasked with pulling together research efforts to focus on what might be happening in the marine environment, and how that might change management of the birds.

The Yellow-eyed Penguin Trust’s Dave McFarlane says the Trust is moving away from managing the penguins at a population level to focusing on individual birds, and providing medical treatment and rehabilitation if needed.

This summer the Trust employed wildlife vet Lisa Argilla to provide veterinary care for sick and injured birds, which were then taken to one of two penguin hospitals to be cared for until they could be released.

Penguin Place’s Lisa King says that this has been a relatively quiet year at their penguin facility, but she worries that this might just reflect the yellow-eyed penguin’s shrinking population. 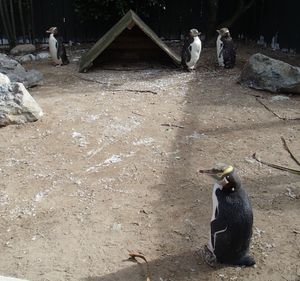 Moulting yellow-eyed penguins in Penguin Place's Penguin Hospital. When their moult is complete they will be re-released where they came from in Otago or the Catlins. Photo: RNZ / Alison Ballance

Lisa says Penguin Place, which runs penguin viewing tours, “didn’t really have a choice” about getting involved looking after sick and injured penguins back in the early 1990s.

“Over the last few years in particular the yellow-eyeds have had a very tough time, and we’ve had over 400 birds through this facility in the last three years.”

The worst year was 2013-14, when 187 yellow-eyed penguins came through the Penguin Place hospital; “this was a year when there were lots of starving chicks”. In 2012-13 there was a mass mortality event that affected adults, and over 70 birds were treated. 2014-15 saw 119 birds come through, and there was a mixture of starving chicks and adults with barracouta injuries.

“You can’t pinpoint one thing in particular, which is frustrating,” says Lisa. “If you could just say it’s ‘this’ and we can deal with this. It’s like every year you get hit with something else and it’s very frustrating.”

In this Our Changing World interview Alison Ballance discusses the history of the Yellow-eyed Penguin Trust and its work with Sue Murray and Dave McFarlane, and she also joins an expedition to the subantarctic Auckland Islands to count yellow-eyed penguins.