Truffle-like fungi: what their genes can tell us

“It’s quite exciting to think that all around the world truffle-like fungi are evolving independently to look similar to each other, even though they all have different close relatives, most of which are mushrooms.”
David Orlovich, molecular botanist, University of Otago 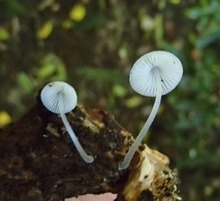 A typical mushroom, growing on rotten wood on the forest floor. The umbrella-like cap protects the spores from rain. Photo: RNZ / Alison Ballance

Fungi come in all shapes and sizes. There are the familiar mushrooms and toadstools, with their distinctive umbrella-like cap, that keeps rain off the spores developing in gills on their underside.

There are underground truffles that are prized, not for their lumpy potato-like appearance, but for their delicate aroma, which is a way of attracting animals that will dig then up, eat them and spread their spores.

New Zealand’s truffle-like fungi are often brightly coloured – red, blue or purple – and are found in association with rotting wood on the forest floor. 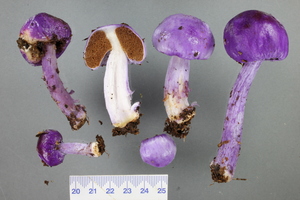 The late Ross Beever suggested that they had evolved to resemble large fruits, to encourage birds such as moa to eat them and spread the spores in their droppings. Another theory is that the trait evolved in response to changing climates.

An interesting thing about the group of truffle-like fungi is that its members are not closely related to one another, but have evolved independently at different times. The closest relative of each truffle-like fungi is a mushroom, and it is these relationships that are the basis of an international genome sequencing project funded by the Joint Genome Institute, which is part of the Department of Energy in the United States.

“Our goal is to compare all these pairs of truffle-like fungi and their mushroom relative,” says David, “to see if we can see if there are any common genomic changes or genetic differences that they all have in common, so we can look to see if there are similar mechanisms that are allowing these things to evolve.”

“From our initial project with one fungal pair in New Zealand, we’ve got some draft sequences that are looking interesting,” says Chris Brown from the University of Otago’s Biochemistry Department. “But now we’ve gone to a consortium with people from Australia, the United States and Europe, and we’ve got funding from the Joint Genome Institute who are trying to sequence 1000 fungal genomes [around the world], and they’ve funded $800,000 worth of sequencing. We’ll be looking at 12 different pairs in New Zealand and looking for commonalities in the evolutionary process.” 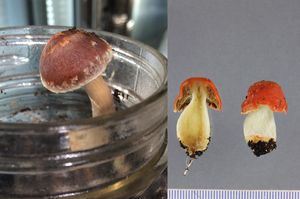 The mushroom Leratiomyces ceres (left) is the closest relative of the red pouch fungus (Leratiomyces erythrocephalus - right). This mushroom has been cultivated in a lab for genome sequencing. Photo: University of Otago

Chris says a European team sequenced the edible black truffle, and they found that although it had a large genome for a fungus, it had fewer functional genes than most fungi. Those 7500 functional genes “sort of pushed it into that ecological niche, as it can’t break down carbohydrates on its own and needs to be symbiotic with the plant. I think that’s one of the processes we’ll be seeing in the evolution to the truffle-like mode of growth.”

The University of Otago team of David Orlovich, Chris Brown and Tina Summerfield are trying to identify 12 New Zealand fungal pairs, and then collect and cultivate them to be able to have uncontaminated material to work with.

The Joint Genome Institute project is the Fungal Evolution of Truffle-Like Bodies: Acquisition of the sequestrate (truffle like) habit by basidiomycete macrofungi. 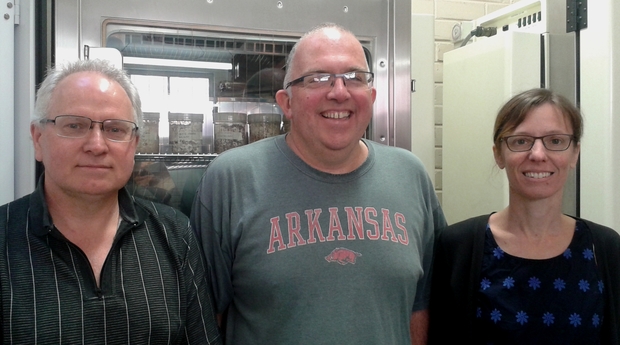 Chris Brown, David Orlovich and Tina Summerfield, standing in front of the fridge where they are cultivating truffle-like fungi under sterile conditions. Photo: RNZ / Alison Ballance