The 'smarts' behind a smart motorway

120 traffic cameras feed into the Wellington Transport Operations Centre to provide round the clock traffic monitoring and operation for 3000 kilometres of state highways and motorways throughout Wellington and the central and lower North Island. Photo: RNZ / Alison Ballance 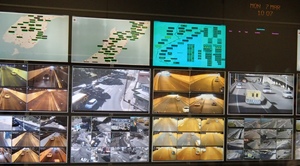 When New Zealand’s first smart motorway opens in the middle of the year it will boast a world-first predictive traffic model that will anticipate likely changes in traffic flows during rush hours, and set optimal speed limits to ensure that traffic keeps moving.

A network of traffic cameras, radar, sensors embedded in roads throughout the region, and Bluetooth and wifi signals emitted from passing cars will enable the computer models that sit behind the smart motorway to assess the numbers and speeds of cars on the motorway.

“How the traffic actually flows down the road makes a big difference. If we can get it travelling smoothly then we can cut the time it takes to get to your destination,” says Neil Walker.

The system will learn as it goes. When the smart motorway becomes operational in mid-2016 there will still be a large human input into decision-making. This will lessen over the next few months as the computer model ‘learns’ how Wellington drivers use the highway network at different times of the day and year, and the system will eventually become fully automated.

The predictive model will set variable driving speeds to avoid what are known as ‘shock waves’. These result from sudden braking and lane changing, and cause cars to slow down and back-up. Extensive computer modelling as well as real life experience shows that it is better for traffic to drive steadily and slowly, rather than speeding up and slowing down all the time.

At the moment estimated driving times are based on past travel times, for cars that have been monitored during the previous 20-30 minutes. As the traffic model learns it will begin to generate predicted travel times, that factor in anticipated changes to traffic flow.

The smart motorway is a combination of technology and improved road layout. When the smart motorway launches, the first change that motorists will notice is a fourth lane on the stretch of motorway between Aotea Quay and Ngauranga Gorge. This extra lane has been created by removing the hard shoulder, and removes an existing bottleneck. 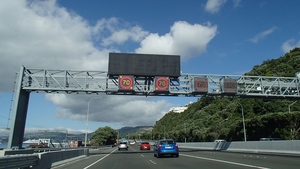 While road works have been underway to alter the median barrier and realign the lanes, new gantries have been installed that carry speed limit signs, as well as lane signs and message boards.

The smart motorway is controlled from the Wellington traffic operations centre in Johnsonville, which manages roads throughout the lower North Island.

LEARNZ has run several virtual field trips about the technology behind the smart motorway project.

Pavement research at OPUS to develop better road surfaces has featured before on Our Changing World, as has research into rumble strips.

Geodesy, the science of knowing where you are, is also an important tool in building roads.