Written in the layers of mud at the bottom of a South Island lake is a comprehensive climate history. It details storms and floods, fires and droughts, year by year, right back to the end of the last Ice Age, some 18,000 years ago. This week, it emerged from the deep.

The barge, at anchor at the first drill site in Lake Ohau, is dwarfed by mountains. Photo: RNZ / Veronika Meduna

Lake Ohau, in the Mackenzie Basin, is a popular spot for trout fishers and mountain bikers, but for the last two weeks, a team of scientists has set up camp on its shoreline. With them, they brought heavy-duty machinery: a 10-metre research vessel, a double-pontoon barge and a drill rig, all part of the Lake Ohau Climate History project.

They drilled deep into the lake bed to unearth two cores of muddy sediment that has been accumulating ever since a huge glacier began a quick retreat at the end of the last Ice Age.

The layered mud that has emerged is a geological time capsule. The alternating bands of light and dark sediment record weather events, vegetation changes and human impacts, from a point in time some 18,000 years ago to the present. 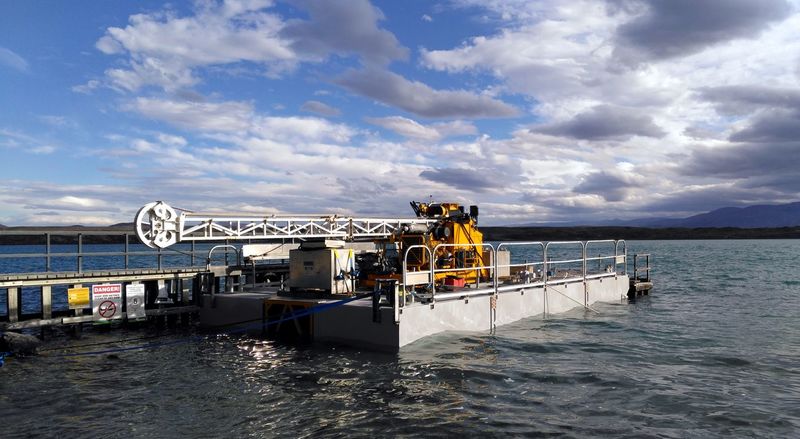 The twin-pontoon barge is ready to be towed to the first drill site on Lake Ohau. (image: Delia Strong) 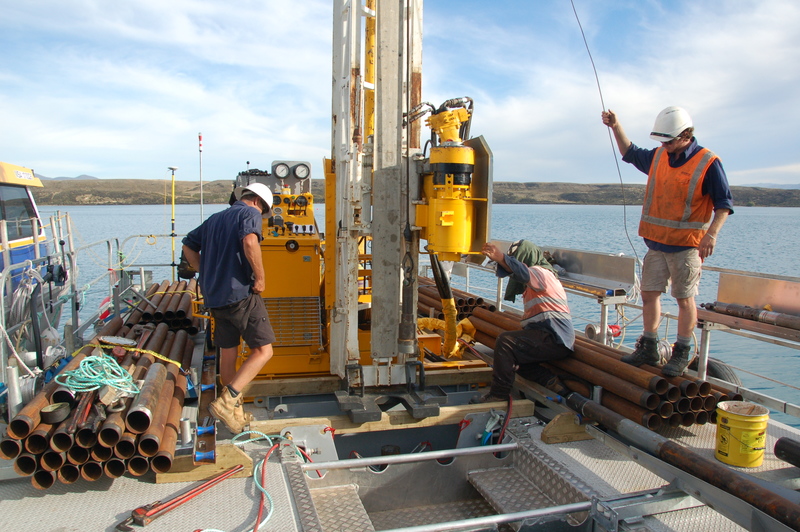 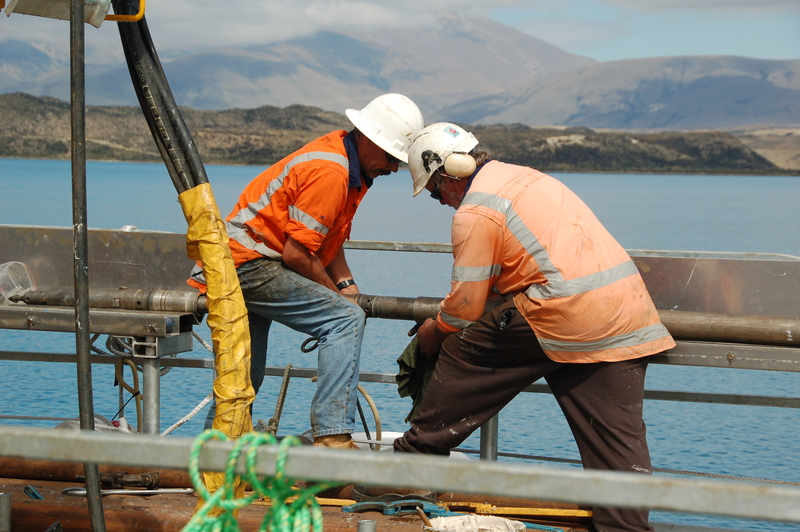 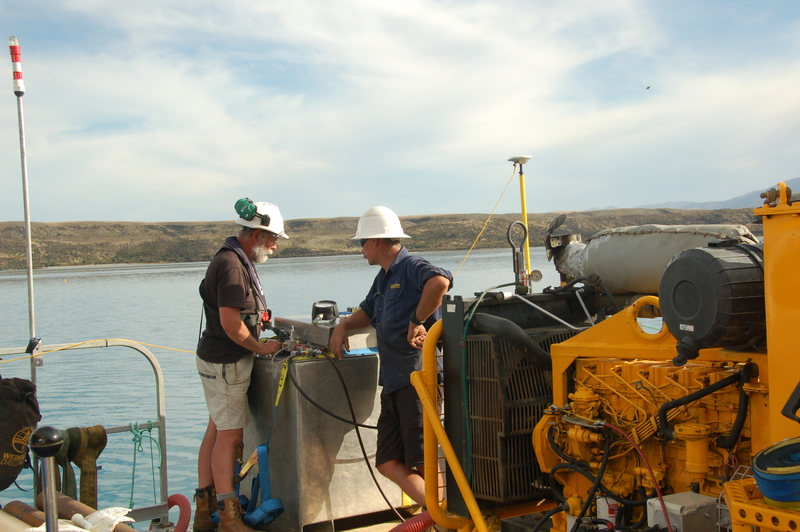 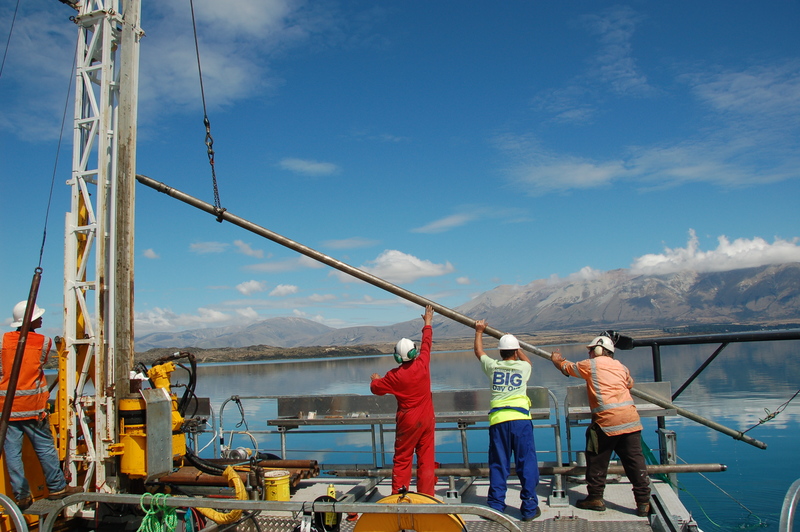 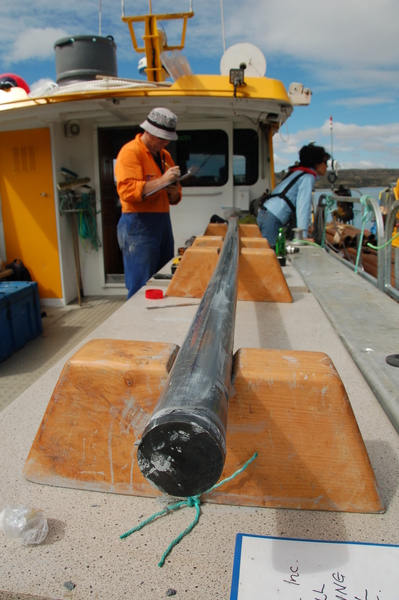 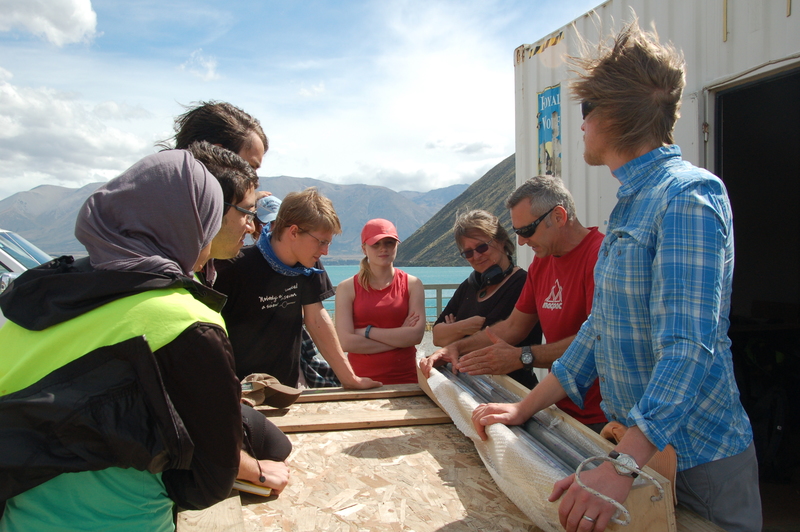 Marcus Vandergoes (in red T-shirt), of GNS Science, explains the information contained in the sediment core to a group of University of Otago students. (image: Delia Strong) 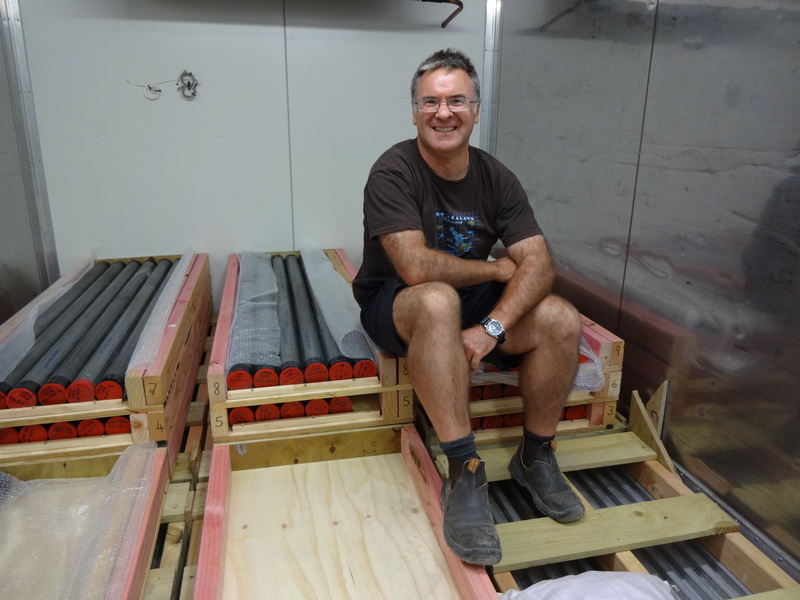 Gavin Dunbar, at Victoria University, in the chiller where sediment cores are stored before being transported to the University of Otago for further examination. (image: Delia Strong)

Sitting at the shore and overlooking the debris left behind by the glacier, Gavin Dunbar, a palaeo-climate scientist at Victoria University and one of the project leaders, reads the landscape. “During the Ice Age, all of this basin would have been filled with ice, several hundreds of metres thick. We know it retreated very quickly from about 18,000 years ago.”

The reason scientists can tell how quickly the ice disappeared is because they can date the end moraines by looking at how long they have been exposed to cosmic rays from deep space that continuously bombard the earth’s surface. This shows that the glacier retreated by about 20 kilometres in a few centuries, “extremely quickly” in geological terms.

"Climate change was at its most dramatic at the end the Ice Age when the planet was warming up and there was a massive retreat of ice all over the Southern Alps."
Gavin Dunbar

Apart from the signature of glacial retreat, the sediments from Lake Ohau also trace another important climate signal. The southern part of New Zealand lies under a belt of westerly winds, and these air currents can migrate north or south, driven by large-scale features in the climate system.

“Lake Ohau is right at the edge, at the northern boundary of these westerly winds … and the westerlies control a lot of our weather, and ultimately our climate,” says project leader Richard Levy, at GNS Science.

“What we’re interested in knowing is how that wind system has evolved through time, and moved or responded to large-scale features in the global climate system.“

The westerlies are caught between two major climate drivers – the El Niño Southern Oscillation, or ENSO, in the tropics and the Southern Annular Mode, or SAM, from Antarctica.

"We’re sitting at a location that’s been influenced by the tropics and by Antarctica. We’re essentially at a point where these two forces meet and have a battle, and the battle ground is the westerlies. As those two climate phenomena change, it will ultimately affect out climate."
Richard Levy

Dr Levy says climate models predict that the westerly winds will migrate further south, pushed by changes in the SAM system, and bring drier conditions to New Zealand. “We want to know if we can find evidence from the past of intervals of time when the SAM was positive or negative. Did it in fact affect the westerlies, did it in fact affect our climate. So local records are giving us a global view – a signature of this inter-hemispheric battle between the tropics and the south.”

Marcus Vandergoes, also at GNS Science and a project leader for the Lake Ohau Climate History project, reads the mud like a history book.

He is particularly interested in past vegetation changes, from the tundra-like shrublands  that followed the Ice Age to podocarp forests and later beech forests, and the return to grasslands once people arrived and burnt the landscape.

He says from the moment humans first entered the landscape, the changes are striking and quick. Remnants of charcoal and pollen chart the arrival of early Polynesian people and the impact of their fires that turned vegetation back to grass within 48 years.

"It’s basically one or two human generations. It’s a rapid change in the landscape over a short period of time."
Marcus Vandergoes

European settlement is also written in the core. “The main thing we see that in is pollen. We see the introduction of food plant species for the sheep. Sheep sorrel is one that is introduced early on. It’s followed by the introduction of pine trees in the landscape and then willow trees.”

Dr Vandergoes says he hopes to zoom in on the beech pollen signal to investigate the frequency and intensity of mast years in the past, particularly during periods when it was warmer than today.

Richard Levy says the main benefit of the record from Lake Ohau is that it extends the time series of climate data well beyond the period of direct measurements, which only spans the last century.  He says such “hindcasting” will improve forecasting of climate impacts in the future.

“If we can use that information to test the ability of models to simulate those past changes, and if the models are able to capture the variability, then we have a lot more confidence in the models pushing forward.

“Without this sort of detailed record from New Zealand, from the Ohau region, we don’t have the ability to really thoroughly and robustly test those models.”