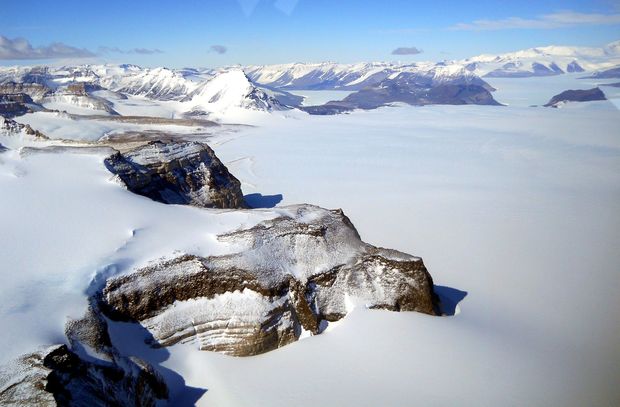 Ice from East Antarctica flowing through the Transantarctic Mountains. 16 million years ago this region would have been ice-free and covered in tundra vegetation. Photo: Richard Levy / GNS Science

Unless the world sticks to the Paris climate agreement to keep global temperature rise below 2°C, Antarctica’s coastline could become home to trees and shrubs that grow in New Zealand’s high alpine areas now.

That’s the finding of an international group of scientists who examined a drill core that contains rocks and sediment deposited some 15 to 20 million years ago, during a time in Earth’s history that was 3°C to 4°C warmer than today and when carbon dioxide levels in the atmosphere were at 500 parts per million.

Listen to the full Our Changing World report here:

“This research gives us a look into Earth’s potential future if greenhouse gas levels continue to rise and temperatures continue to climb,” says Richard Levy, a geologist at GNS Science and a co-leader of the project.

“You stand on the shores of East Antarctica today and it’s a very barren looking place. There’s microscopic life, things you can’t see with your eyes, but if you look around you certainly don’t see green vegetation. But when we drilled back in time to these intervals in the past where we know global climate was warmer than today, about three to four degrees warmer, we found evidence of plant life in Antarctica.”

He said back then the ice sheet had retreated enough and the climate was warm enough to support plants along the Antarctic coastline that were similar to those growing in the alpine areas of New Zealand.

The drill core also revealed evidence of shellfish that today could not survive south of New Zealand’s subantarctic islands, but back then flourished along the Antarctic shoreline at the foot of the Transantarctic Mountains.

Dr Levy said this glimpse into the past provided a guide to the future, if greenhouse gas emissions continued unabated.

Scientists have already shown that the warming ocean was eating away at marine-based sections of Antarctica’s ice sheets. But Dr Levy said this research now confirms that it doesn’t take much more warming to start the melt of land-based ice.

Without ambitious measures globally to reduce greenhouse gas emissions, carbon dioxide concentrations in the atmosphere are projected to reach 500ppm before 2050. Dr Levy said the findings showed that at such levels, Antarctic melting would have significant consequences for sea level rise.

He said it was not possible to be specific about how big the contribution to future sea level rise would be, but the study showed that land-based ice was more susceptible to warming of relatively small magnitude and more vulnerable to melting than previously thought.