In pursuit of the yellow octopus

Fisheries scientists are spending more than a month at sea around the subantarctic Auckland islands, surveying the diet of New Zealand sea lions to figure out how hard the endangered marine mammals have to work for their food. Among the species the team hopes to spot is the elusive yellow octopus. 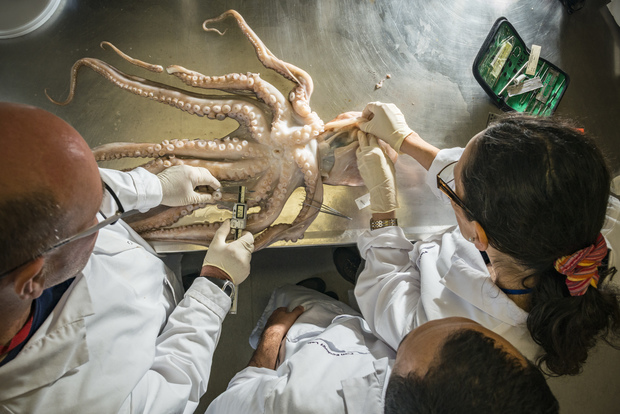 Octopuses are clever, arguably the smartest among invertebrates. They are playful, even mischievous. And they make excellent mothers, with some taking as much as a year off from other activities, including eating, to look after a gelatinous mass of eggs.

To many of us, octopuses seem otherworldly, with their eight suckered arms, a parrot’s beak for a mouth and an uncanny ability to squeeze their body through the tiniest cracks.

Of the 35 or so species of octopus at home in New Zealand waters and the Southern Ocean, we only encounter a few that inhabit fissures and crevices among rocks in shallow coastal waters. Others, such as the yellow octopus, live in the deep ocean and only turn up when they are caught accidentally as part of fishing operations. 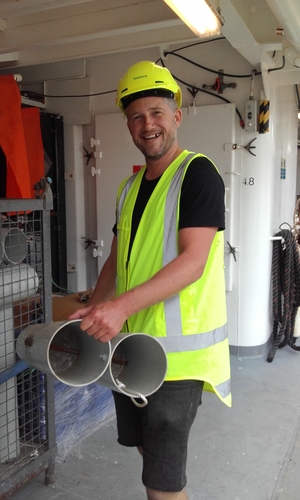 Jim Roberts demonstrates one of the octopus pots, based on an ancient design and the idea that octopuses like to hide in caves and crevices. Photo: RNZ / Veronika Meduna

This month, NIWA’s research vessel Tangaroa sailed south to the subantarctic Auckland Island group to catch a few of these elusive deep-water creatures. Enteroctopus zealandicus is a big, fleshy octopus, and probably quite abundant and widely distributed. It is not a target species for New Zealand fisheries, and therefore only a few specimens have been caught accidentally and studied in detail.

NIWA fisheries scientist Jim Roberts says yellow octopus is one of the main prey species for sea lions and getting a better idea of their distribution and abundance should shed light on why the subantarctic sea lion population has declined so dramatically in the last few years.

"The New Zealand sea lion is endemic here, most of the breeding is around the Auckland Islands, and that population has declined by something like half in the past 15 or 20 years and it shows numerous indicators of food limitation. The breeding females are quite small, they start breeding late in life, relative to the Otago peninsula population, and we can also see evidence for changes in diet composition over time."

During the expedition, the team will carry out a demersal trawl survey of several prey species that are on the sea lion menu, including hoki, southern arrow squid, hake and red cod. But octopuses are clever enough to evade trawls and the team is using specially designed octopus pots, made from plastic tubes that will be lowered down to the ocean floor, to depths of up to 500 metres.

He says even just a few specimens would help the team to characterise the octopuses’ own diet, to determine their age and how long they live, and whether they have recruitment pulses during which their abundance decreases, and consequently, the sea lions find less food. 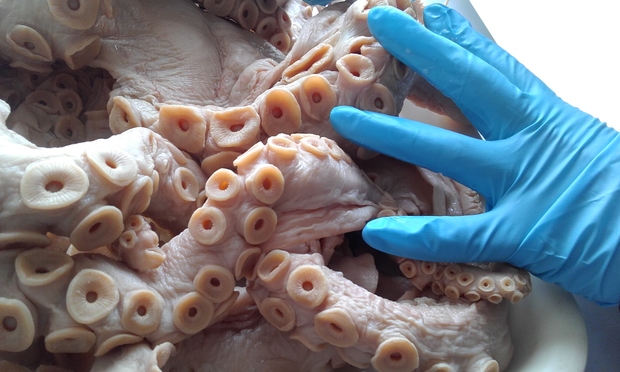 Although the yellow octopus is large and probably quite abundant, very little is known about it. Photo: RNZ / Veronika Meduna

“We don’t know how many there are but we know that there are least a million every year because that’s how many the sea lions are eating.”

He says the hope is that the pots will provide a nook for four octopus at a time. “We think they might be like their close relatives, which make their homes in dens. Here they live a lot like messy teenagers, leaving the remains of what they’ve been eating just outside their front door.”

If the Tangaroa returns with yellow octopus specimens, NIWA marine ecologist Mark Fenwick hopes to carry out a genetic analysis, which will help the team to track their diversity. “Low genetic diversity could mean that they are being overfished by the sea lions, high diversity could mean something else.”

He says genetics is likely to throw up a few surprises, not just for the yellow octopus but for New Zealand's octopus fauna in general. “We can answer many questions by using morphology - counting sucker rows, describing the radula shape, measuring arm lengths – but in octopuses morphology is very variable within species. Genetics could change the octopus family tree.”