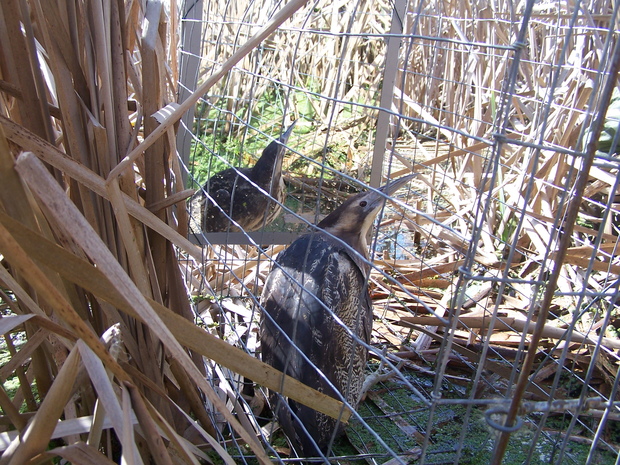 Bing Crosby the bittern was lured into a trap after he responded to recordings of booming and then 'met' another bittern, which was his own reflection in a mirror Photo: John Cheyne

The seven boomers are male Australasian bitterns, and they are part of Massey University PhD student’s Emma Williams research into developing monitoring methods for cryptic species.

Emma describes bitterns as the “the most elusive and cryptic of all species”. They live in dense raupo in wetlands and around the edge of small lakes, and look “pretty much the same as the raupo”.

“Their plumage is light and dark brown streaks, and when they see us coming they go into the ‘freeze’ pose. They straighten themselves up and point their beak towards the sky, and all those streaks line up exactly with the raupo – it makes them very difficult to see. And if it’s windy they’ll even sway with the wind, to make themselves blend even more.”

And as well as being a tall thin brown bird, Emma says these “masters of disguise” can also flatten themselves on the ground. “Most people don’t know they do this, and they can completely disappear.” 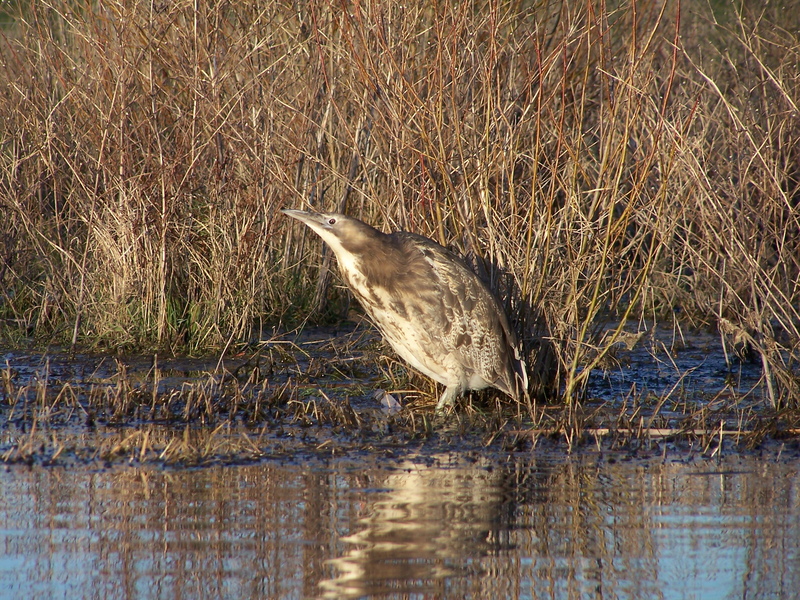 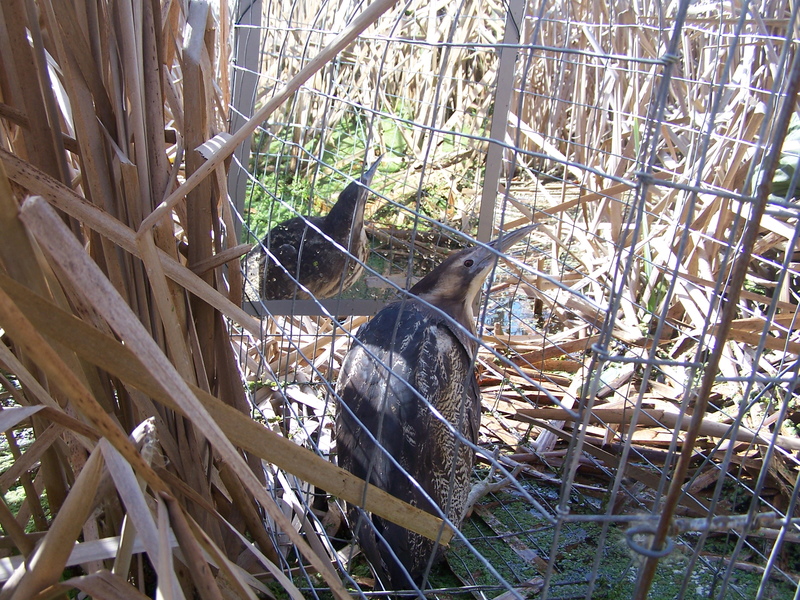 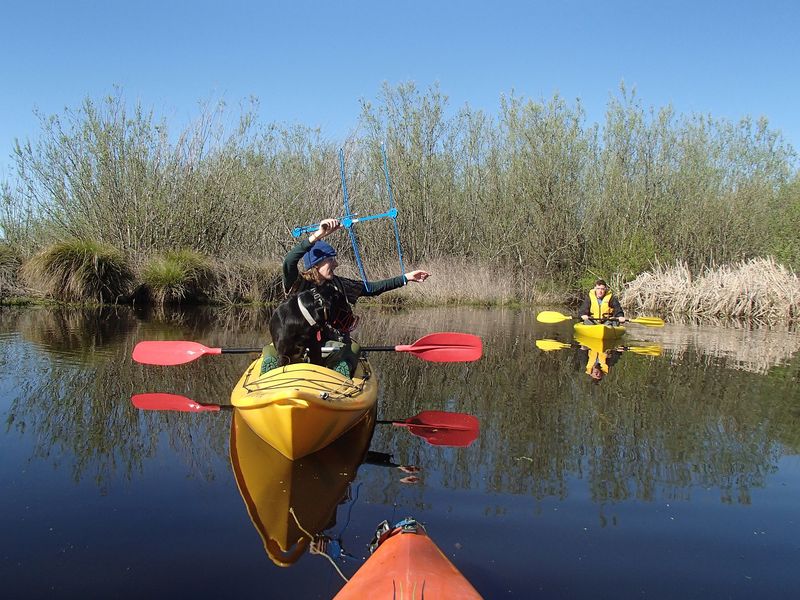 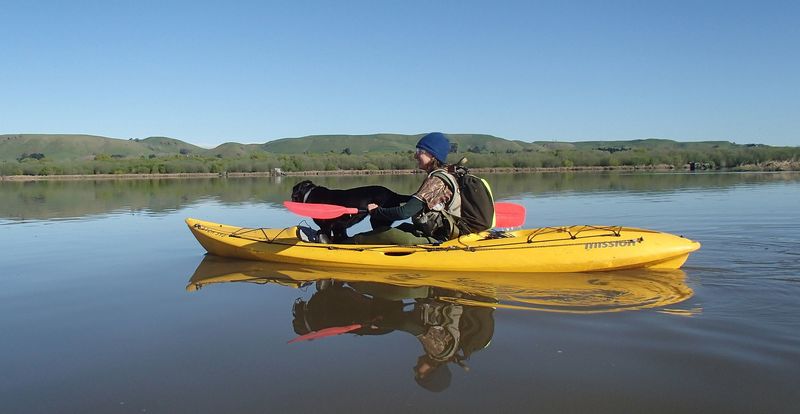 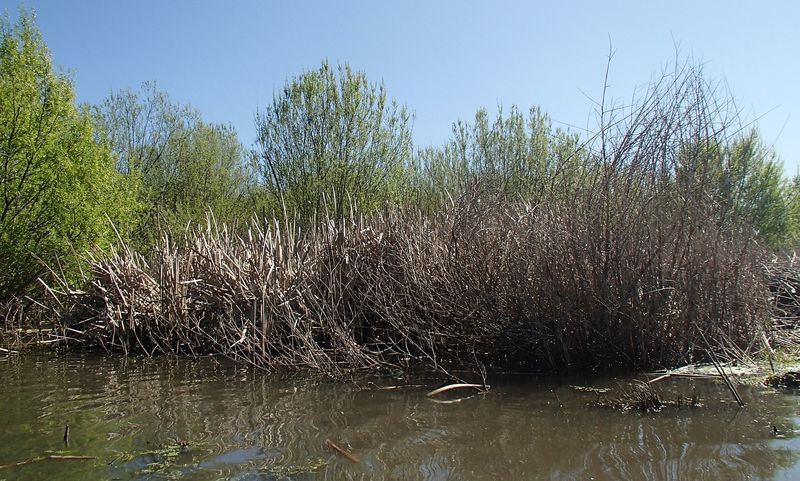 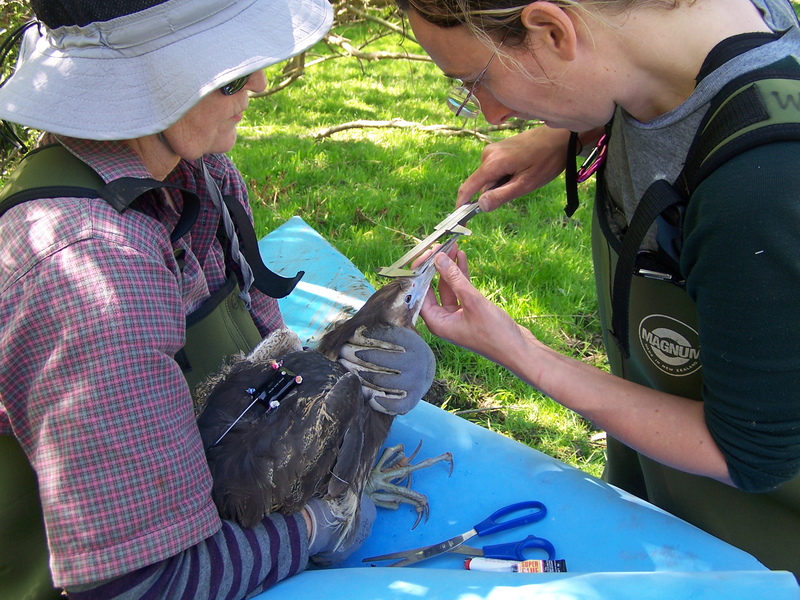 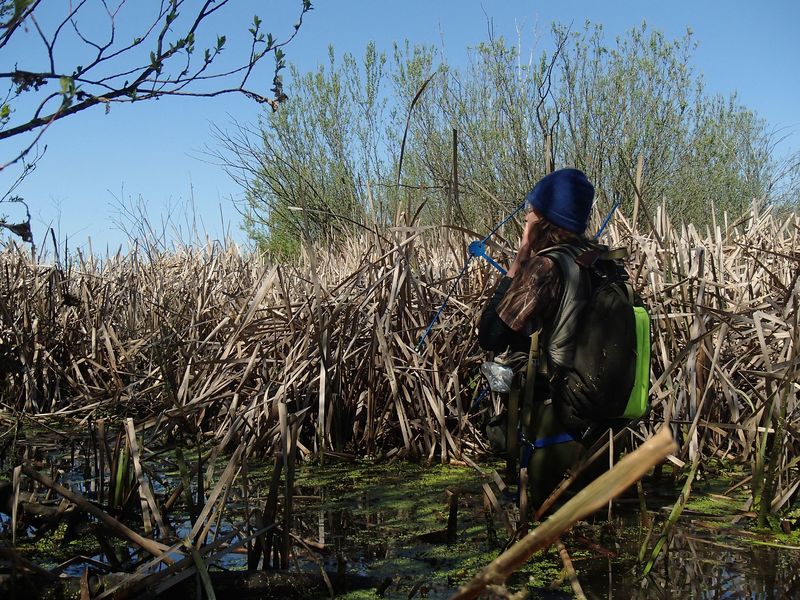 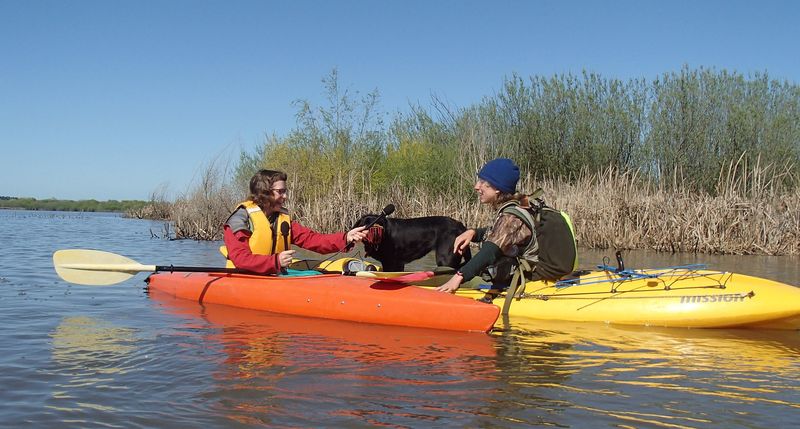 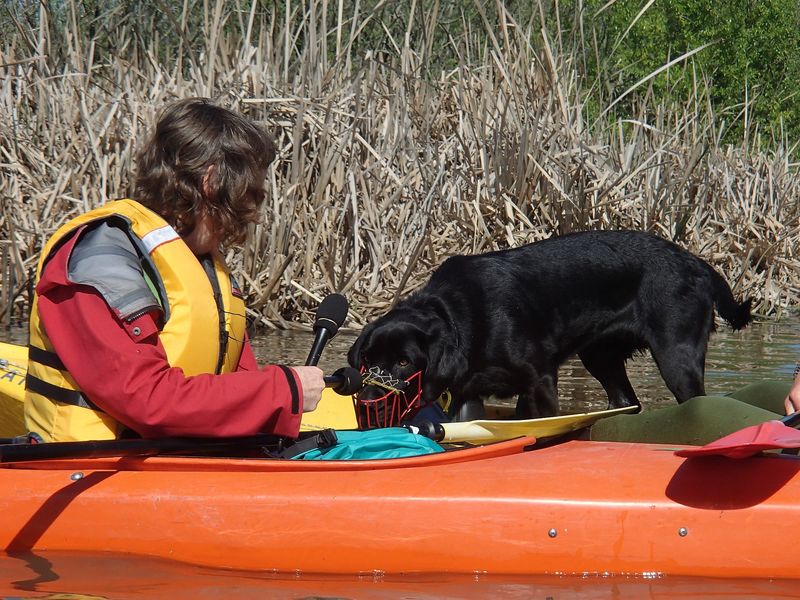 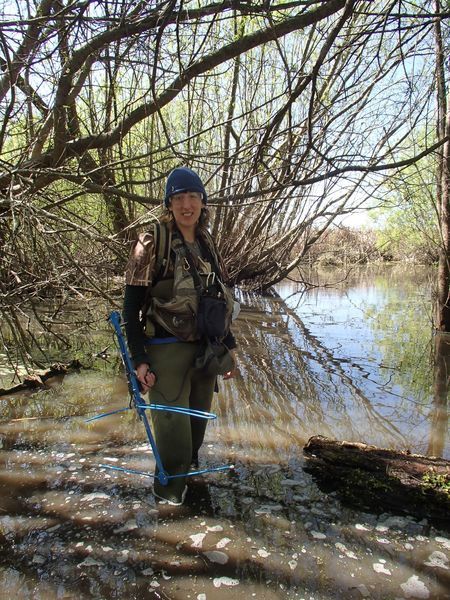 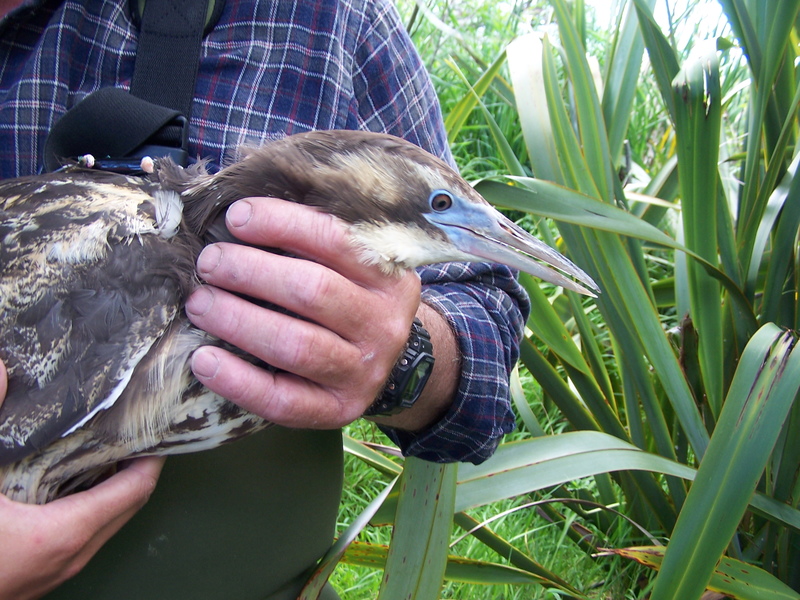 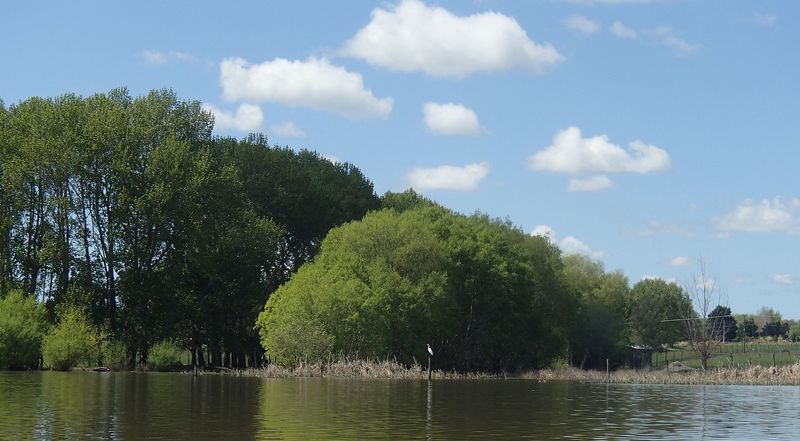 Emma’s main study site has been Lake Hatuma (or Whatumā) near Waipukurau in Hawke’s Bay. She has radiotagged seven male bitterns, which means she is able to locate those birds. This has allowed her to then test various methods of detecting birds, including using her specially trained bittern dog, Kimi, who has just achieved full conservation dog certification.

To catch male birds in the first place, Emma recorded the deep foghorn-like booms that the males make each evening and dawn during the breeding season. She played recordings of the booming next to a live capture cage that contained a mirror – when the local bittern approached to see who its rival might be it would see its own reflection, and rush into the trap, thinking it was another bird. 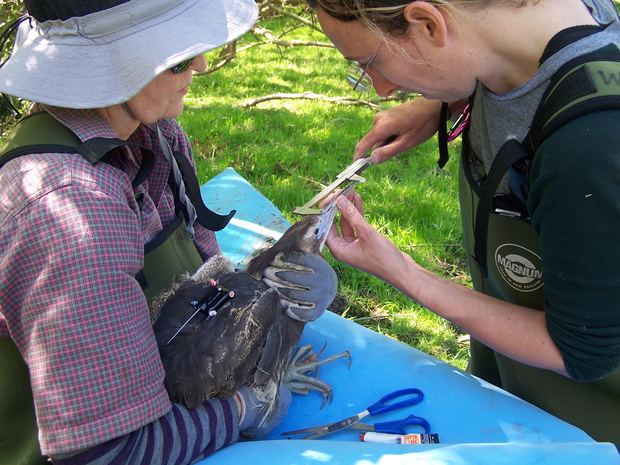 Gail Cheyne (left) and Emma Williams (right) measuring Tama Tomoana the bittern before attaching a radio transmitter to him. Both handlers have to wear glasses as bitterns can strike very quickly and often aim at people's eyes. Photo: John Cheyne

While it is relatively easy to catch the male birds, it is the female birds that Emma is hoping to catch using her dog, as very little is known about their behaviour. Radio tagging females would allow her to follow the breeding success of the birds.

Emma has developed an intimate knowledge of some of the behaviour of her male birds.

“Just before a male starts start booming, he’ll actually jump up and down and create a platform for himself, a bit of a bowl. So sometimes you’ll see him, this bit of brown hopping up and down above the raupo. When he’s happy he’ll crouch, puff himself up and then start to boom.”

Emma describes bittern booming as being akin to bagpipe playing.

“It’s compressed air being pushed out of his oesophagus, exactly like you’d push air through a bagpipe. His long neck is the tube, and his body is the bag that is squeezed.”

Like kakapo, male bitterns boom to attract females for mating. Females then incubate eggs and raise chicks on their own nearby, although they chase the male away if he comes too close.

The radio-tagged birds have revealed some amazing long distance journeys, says Emma. Over a dry summer, all seven radiotagged male birds left Lake Hatuma. Six turned up on various farms, hanging out in small patches of raupo along spring-fed creeks. Emma says the birds were right under the farmer’s noses, but nobody knew they were until she tracked them.

One bird flew 15 kilometres, and Emma says the seventh bird travelled further than that as he disappeared, and she didn’t find him until he turned up at Lake Hatuma again after an eight month absence.

A juvenile Australasian bittern in Australia flew more than 550 kilometres.

Bitterns feed on small fish, eels and frogs in shallow water. When I visited Emma at Lake Hatuma she found two birds feeding together in mid-morning in a flooded paddock several hundred metres from the nearest raupo patch. She didn’t know the identity of the second bird.

Australasian bitterns are listed as Nationally Endangered. This summer a few bitterns turned up in places around Christchurch, and have been radiotagged and released back into wetlands.

There are thought to be fewer than 1000 Australasian bitterns in New Zealand. They are also found in Australia and New Caledonia.

World Wetland's Day is marked each year on 2 February. 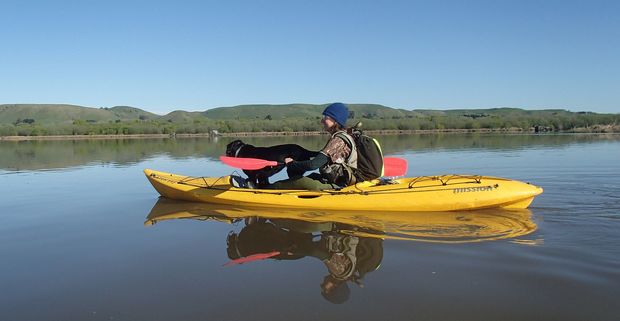