“At the moment I’m working on the possibility that you can have gold nuggets growing in the ground, under low temperature conditions.” Dave Craw, geologist, University of Otago 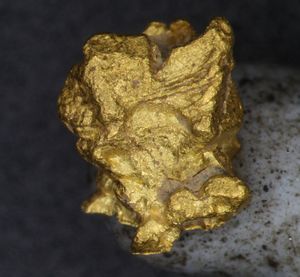 A small gold nugget formed in a quartz vein. This is not alluvial gold. Photo: Dave Craw / University of Otago

There’s gold in them thar hills and rivers, and University of Otago geologist Dave Craw says if you can’t find some gold when you go panning in rivers around Otago then you’re not panning properly. However, don’t expect to get rich quick. The gold is mostly tiny flakes, about half a millimetre across, very thin and often folded over. In the right place, though, you might also be able to find larger gold nuggets, using a metal detector.

It’s this transition, from gold flake to gold nugget, that intrigues Dave Craw, and he has a Marsden grant to help him investigate how it might occur at a microscopic scale.

There are two types of gold. Primary gold forms when gold precipitates during chemical reactions between hot hydrothermal fluids and rocks in the Earth's crust. Secondary gold deposits form later, at the earth's surface, when gold is weathered, eroded and then reconcentrated. Some of this secondary gold is geologically very young, just 10-20,000 years old.

“Elsewhere in the world people think that gold as a noble metal that doesn’t move around in the environment. But at low temperatures [of 10°C] I think gold is not a noble metal at all, and that it moves around very readily.”

“In the case of large nuggets, the gold just keeps on growing. If we [don’t] remove them from the environment [and interrupt them] they would keep on growing. Sort of like fish – you can throw them back to get bigger.”

The reconcentration of gold from flake to nugget occurs in a number of ways. One is physical.

"Gold attracts gold,” says Dave. “Gold has a cubic structure when you look at it at the atom scale, and I think new gold likes to build on top of the old gold, just like salt does.”

Dave is adamant that no new gold is being created.

“All we’re doing is taking small amounts of gold from the river gravels, and concentrating it to make a smaller number of larger bits.” 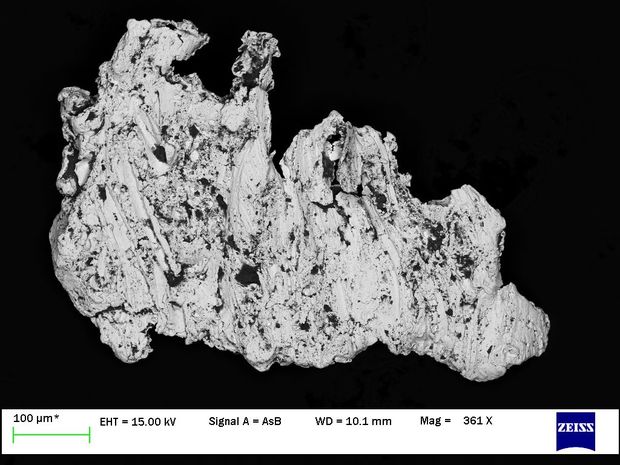 Alluvial gold with new gold added to the outside. The plate-like crystals on this piece of gold have inorganic origins. The image was taken on a scanning electron microscope. Photo: Gemma Kerr / University of Otago

Pyrites, or iron sulphide, is involved in one chemical process that can oxidise and dissolve gold.

Some geologists have also begun to think that biological processes, as well as chemical and physical processes, contribute to tiny flakes of secondary gold being reconcentrated into nuggets.

In a 2007 report on ‘The geomicrobiology of gold’, co-authored by Dave Craw, the authors write:

‘Microorganisms capable of actively solubilizing and precipitating gold appear to play a larger role in the biogeochemical cycling of gold than previously believed. Recent research suggests that bacteria and archaea are involved in every step of the biogeochemical cycle of gold, from the formation of primary mineralization in hydrothermal and deep subsurface systems to its solubilization, dispersion and re-concentration as secondary gold under surface conditions.’

Dave is using a scanning electron microscope to investigate samples of New Zealand gold at a nano scale, and what he is seeing in some cases has all the hallmark of bacterial activity. Patterns that resemble worm casts appear to be the work of bacteria which live on the gold, and excrete any gold they ingest from their cells. This process has been shown to happen in the lab, and Dave suspects it is also happening in streams and rivers. 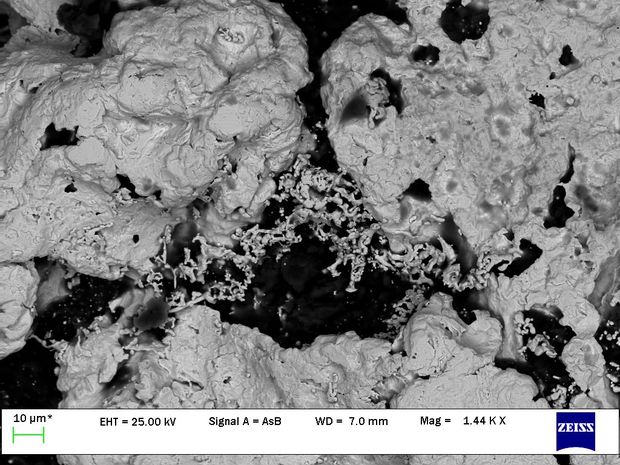 Alluvial gold from Central Otago that has had some gold organically added. The vermicular or ‘worm cast’ like structures are probably bacterial in origin. Photo: Gemma Kerr / University of Otago

While he is confident that the process happens at the nano scale, Dave now says he wants to examine bigger nuggets.

He says he has seen the same processes that he sees in New Zealand happen in California, but not in the Yukon.