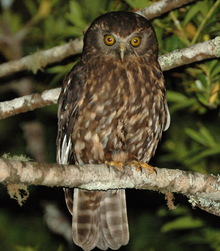 If you’ve spent any time near a patch of bush at night, there’s a good chance you will have heard the haunting two-note hoot of the morepork. Perhaps even its churring cree call that sounds almost like a female kiwi.

The morepork, or ruru, is our only surviving native owl. It’s considered relatively common in most parts of mainland New Zealand and on offshore islands, but its population could be in decline.

Ruru nest in tree cavities, which means that incubating females and chicks are vulnerable to introduced predators, says Department of Conservation scientist Moira Pryde. And because they are hunters themselves, they are also exposed to toxins that are used to control rats and mice.

To get a better idea of how well ruru are doing, DOC is monitoring them in Fiordland’s Eglinton Valley, but on the Banks Peninsula, where ruru are less common, locals have decided to help them along by providing nesting boxes. 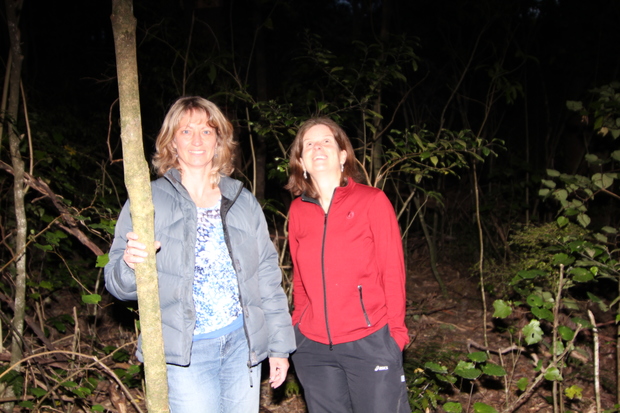 Last summer, the Banks Peninsula Conservation Trust launched a project to encourage landowners to listen and watch out for morepork at night to establish how many may be breeding in the area and how big their home ranges are.

Alison Evans, who coordinated the project, says locals have seen ruru chicks in lowland DOC reserves on the peninsula, but there is little information about how successful their breeding efforts are in areas that are not protected and which parts of the peninsula provide the best habitat.

We just don’t have a handle on how many there are on the peninsula and we think that there are not very many because there are big gaps. We should be hearing them in some of the outer bays but we are not. The habitat is there but the morepork don’t seem to be.

With a nocturnal bird, she says the usual monitoring methods such as five-minute counts don’t work, and the trust has established Morepork Mondays to focus people’s attention on one night.

“From a scientific perspective, it’s also important to coordinate the listening because morepork move around a lot and we want to avoid people picking up the same bird as it moves.”

In more remote areas, the trust is using acoustic recorders to monitor the birds’ calls, and early results suggest that the morepork prefer the lower lying areas to the higher ranges where most reserves are.

To give the birds a helping hand, the Akaroa Men’s Shed became involved in the citizen science project by constructing nesting boxes, designed specifically for ruru. Howard Wilson, a retired GP who set up the Men’s Shed, says the men have gone through several design upgrades since the original prototype and the latest version is a two-bedroom deluxe accommodation with a waterproof roof, a ledge at the entrance, ladders for the chicks and even a viewing window so that the boxes can be inspected without disturbing the birds.

Moira Pryde says she is particularly interested in how far morepork range in a fragmented habitat, such as the Banks Peninsula, and how well they manage to raise their chicks.

“There’s been an assumption that they breed every year and are successful every year, but in the Eglinton Valley they haven’t been successfully breeding every year. It’s more like every four to five years.”

On the Banks Peninsula, they may also need a larger home range to find enough food, she says.

In Fiordland, the DOC team found that each ruru pair needs about 40 hectares, which is a much larger range  than previous studies conducted on islands suggest.

“Their home range relates to food supply. In beech forests, there is less food so they may have to range a bit further.

“When we studied the nesting success during a year when there was a plague of mice [following a beech mast], one night a male would bring in five mice and the female was actually storing them and not feeding them to the chicks. During other times they may only bring in a few few small insects, so the male has to work really hard.”

Morepork lay two eggs, on average, but she says they rarely manage to bring up two chicks. “Usually because there isn’t enough food. The smaller chick eventually dies and the other ones eats it.”

She says the Banks Peninsula Conservation Trust project will add to the overall picture of how well ruru are doing. “They are not increasing as much as you’d think for a common species. Are they declining? We don’t know.”